Statues are no strangers to controversies. The fact that they are usually modeled after famous people or objects or are in memory of certain events will often put them at the center of controversy. In some instances, protests and even riots have occurred as a result of statue-related strife.

Statues stirring such discord is hardly a phenomenon limited to a handful of countries. In the United States, statues of Confederate leaders and generals have always been a bone of contention. Elsewhere, the statues of the Devil, Hitler, and even a dog have brought similar tumult. 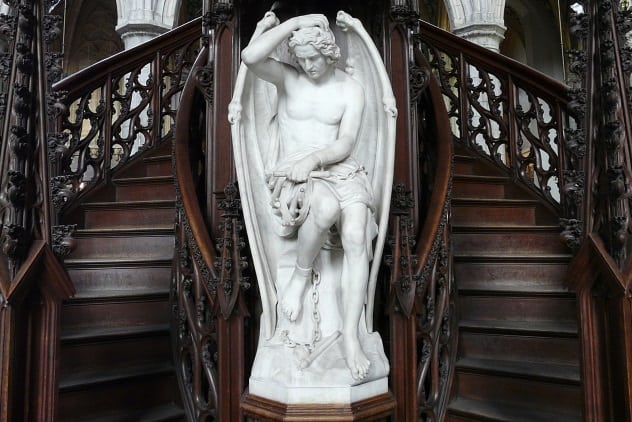 The Lucifer of Liege is a statue inside the St. Paul Cathedrale de Liege in Belgium. The statue’s official name is Le genie du mal (The Genius of Evil ). It was sculpted in 1848 by Guillaume Geefs.

The Genius of Evil was not the original statue of Lucifer sculpted for the church. That was L’ange du mal (The Angel of Evil ), which was sculpted by Guillaume’s brother, Joseph, in 1842. The Angel of Evil started a controversy soon after it was unveiled. Church leaders were concerned that it was too beautiful for the Devil and feared it would negatively influence the children who attended the church.

They commissioned Guillaume to sculpt a replacement. The replacement sculpture is also beautiful in its own right. Its wings beautifully curve around the Devil to form a wall. The Devil also has small horns on his head and protruding, sharp claws in place of toenails. There is also a partly eaten apple at his feet.[1] 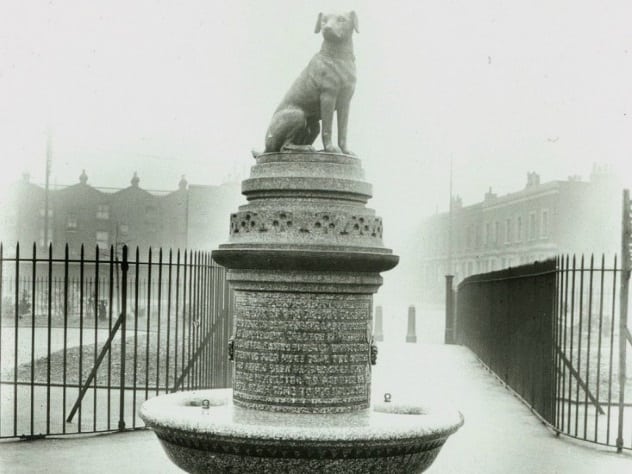 The brown dog statue in Battersea, London, was at the center of a controversy that caused serious riots in the early 20th century. The current statue is a replacement. The original statue was removed after causing series of protests and riots between vivisectionists (who supported the use of animals for experiments) and anti-vivisectionists (who opposed the practice).

The original statue was unveiled by anti-vivisectionists in 1906. It was dedicated to all dogs, specifically a brown dog that was used for series of surgeries over a two-month period at University College, London, in 1903. A plaque attached to the pedestal of the statue criticized the use of dogs in surgeries.

In 1910, the police and city council agreed to remove the statue. Four city officials were escorted by 120 police officers to secretly remove it at night. It is believed to have been melted down two years later. The anti-vivisectionists replaced the statue in 1985, and the replacement has remained untouched ever since.[2] 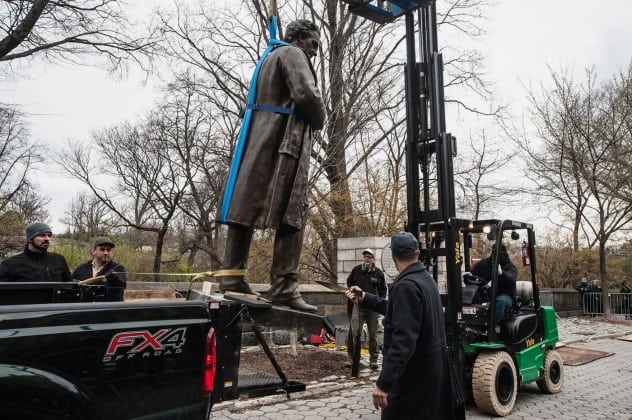 J. Marion Sims is regarded as the father of modern gynecology. In the 1840s, he devised a treatment for vesicovaginal fistula (VVF), a tear that causes the bladder to leak into the vagina, often caused by childbirth. Besides treating VVF, Sims also founded the first hospital for women in New York and invented new surgical methods to treat medical conditions unique to women.

Sims remains a very controversial figure among women despite his contribution to improving their health. He used black slave women for many of his experiments. He tested his VVF surgeries on women he had bought—all without anesthesia. Some even underwent repeated surgeries.

For his work, Sims got a statue in Central Park, while the slave women got nothing. The statue has been a subject of controversy since 1959. It was finally removed in April 2018, following series of protests.[3] 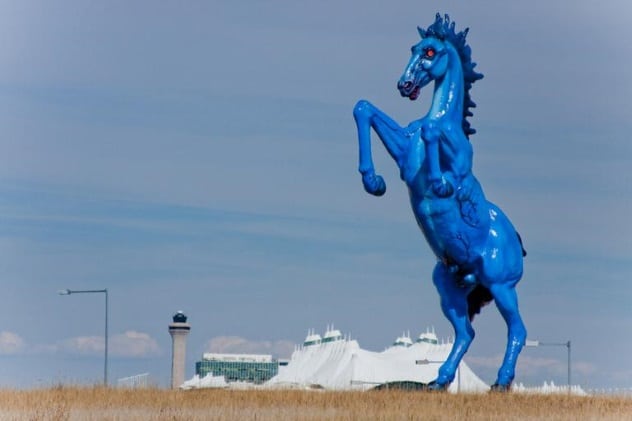 Blue Mustang is the blue, 9.8-meter-tall (32 ft) horse statue outside Denver International Airport. The statue is as controversial as it is infamous. Its critics even named it “Blucifer.”

It is not hard to see why Blue Mustang does not have lots of fans. It has glowing red neon eyes. While its sculptor, Luis Jimenez, added it to represent the Wild West, some believe it only made the statue devilish and unsightly. The fact that Jimenez himself was killed after a part of his work fell on him did not help matters.

Luis Jimenez was commissioned to sculpt the statue in 1993 but did not complete it before dying in 2006. His sons completed it, and it was unveiled at the entrance of the airport in 2008. Negative reception quickly followed. Many critics even suggested that the statue should be transferred to another part of the airport where they will not have to see it. However, authorities left it alone, hoping people will get used to it.[4] 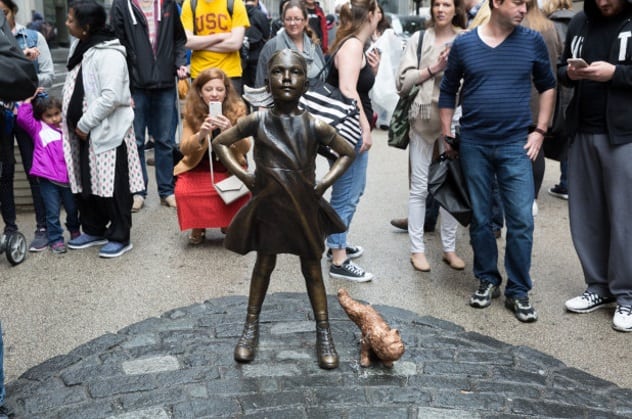 Gardega did not care whether Fearless Girl had anything to do with gender equality or not. He viewed the statue as nothing short of an advertisement since it was funded by top asset manager State Street Global Advisors. So Gardega added a small statue of a pug peeing on the girl in protest.

The pug was controversial, especially among feminists and women’s right groups. They all started directing angry comments at Gardega almost as soon as Pissing Pug was unveiled. Actress Debra Messing even called Gardega a “misogynistic, pathetic bastard.” Gardega removed his dog three hours later over fears that someone would steal it.[5] 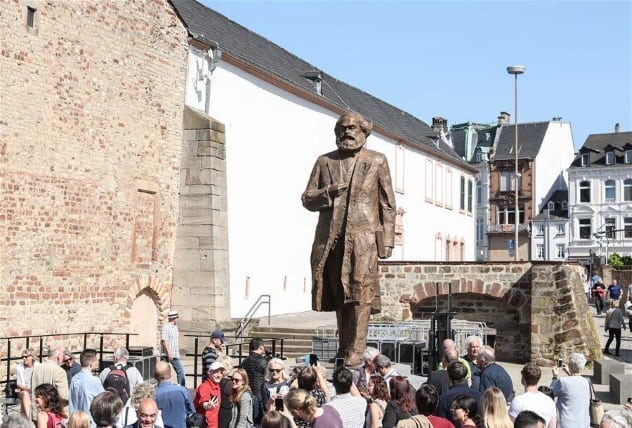 Karl Marx is regarded as the founder of Communism. His political theories, which are still studied in countries like China, are called Marxism. Both are controversial and detested in the West. Judging from Karl Marx’s history and the West’s attitude toward Marxism and communism, it was no surprise that his 4.5-meter (15 ft) statue caused a controversy in the town of Trier, Germany.

The fact that the statue was a gift from China added to the controversy. The Trier town council spent two years deliberating whether to take the statue or not. They feared collecting it could make people think they supported the human rights crimes committed by the Chinese government.

The German branch of Pen, the international organization of writers, said that Trier should not unveil the statue unless China released Liu Xia, the wife of the late Liu Xiaobo (a Nobel Peace Prize winner) who was under house arrest.

Around the time the statue was unveiled in Trier in May 2018, Chinese premier Xi Jinping had given a speech praising Marx and Marxism. Meanwhile, town mayor Wolfram Leibe said the statue was merely a “gesture of friendship.”[6] 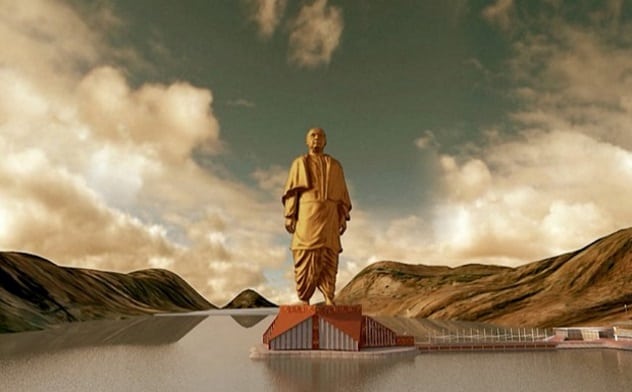 While we have focused on completed statues so far, we have a unique case of an incomplete statue causing a controversy. If it can cause a controversy before it’s completed, heaven knows what will happen once it’s done.

The Statue of Unity is being built in India. It will be 182 meters (597 ft) tall, making it the world’s tallest statue when completed. Currently, that record is held the 153-meter-tall (502 ft) Buddha in China. The Statue of Liberty is 93 meters (305 ft) tall (including the base), for comparison. The Statue of Unity will be modeled after Sardar Vallabhbhai Patel, the first deputy prime minister of India and one of the people who fought for her independence.

Many have criticized the statue for its price and over concerns that it has political undertones. The statue costs £200 million, an amount critics say Patel would never have allowed to be spent on his statue if he were alive. The critics also said the money would have been better expended if it was spent on the millions of Indians in poverty.

Critics also suspect that Chief Minister Narendra Modi, who commissioned the statue, was trying to use Patel’s figure to promote his party. Modi himself had earlier mentioned that Patel would have made a better PM than Jawaharlal Nehru, who became India’s first prime minister.[7] As of this writing, the Statue of Unity is very near completion. 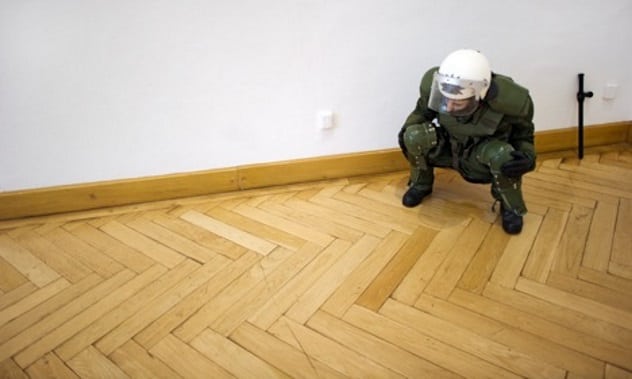 In 2011, artist Marcel Walldorf stirred up a controversy in Dresden, Germany, after he unveiled Petra, a statue of a peeing policewoman. The policewoman is kitted in riot gear as she crouches to pee. On the floor is a puddle made of gelatin to replicate her urine.

Walldorf had entered the statue in a competition organized by the Leinemann Foundation for Fine Arts and came in first, winning the €1,000 prize money. The statue was then displayed at the Academy of Fine Arts, where the controversy started.

Critics said it was an insult to all police officers. The German police union added that it “breached the limits of artistic freedom.” Many others sent letters to the academy (directed at the artist) to vent their disgust. Andrea Weippert, the spokesperson of the academy, downplayed the critics, saying the majority of the feedback they received was positive.[8]

2 Replica Of Christ The Redeemer 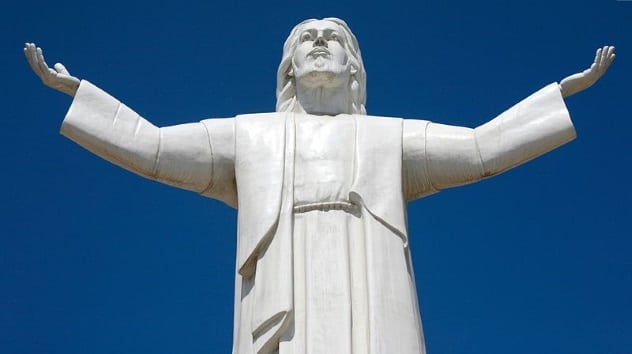 We already know the statue Christ the Redeemer in Rio de Janerio, Brazil. How about its 37 meter-tall (121 ft) cousin in Lima, Peru? It was commissioned by Peru’s outgoing president, Alan Garcia, in 2011 as a personal gift to the people of Peru.

The statue was jointly funded by the Brazil-based engineering firm Odebrecht and President Garcia. Garcia contributed 100,000 Peruvian soles, while Odebrecht added $830,000. Odebrecht did not just contribute such an amount, since it is clearly not a charity organization. It won a lucrative contract to construct a highway between Brazil and Peru, so it had some cash to spare.

The statue had more critics than supporters. It was heavily criticized for its huge cost and unoriginality. Some found it weird that Garcia spent such huge amount on a copy of a more popular statue.

Peruvian architects seemed to have a thing against the statue. Architectural students staged series of protests to register their displeasure. Augusto Ortiz de Zevallos, a popular architect, tagged it as “excessive and authoritarian” and criticized it for being too unoriginal. He compared it with statues of Stalin, Mussolini, and Hitler.[9] 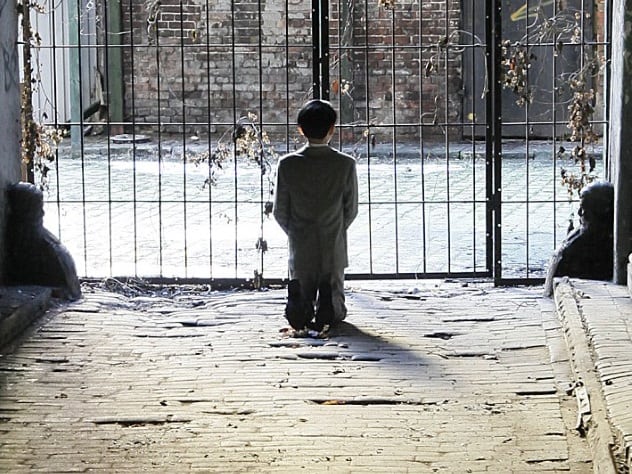 Him is a statue of Adolf Hitler kneeling in prayer. While Hitler is a controversial figure in his own right, the statue could have escaped controversy if its sculptor, Maurizio Cattelan, had not chosen to display it in the former ghetto in Warsaw, Poland, in 2012. An estimated 300,000 Jews either died or were sent to concentration camps from the Warsaw ghetto during World War II.

Jews were particularly vocal against the statue. The Simon Wiesenthal Center, a Jewish advocacy group, said the statue was insensitive and insulting to the Jews killed by the Nazis. Efraim Zuroff, the director of the group in Israel, said “Hitler’s only ‘prayer’ was that they [the Jews] be wiped off the face of the earth.”

Meanwhile, Cattelan and his supporters said the statue was only intended to make people think of how supposedly innocent things could turn evil.[1]

Read about more notable statues and monuments on 10 Statues That People Like To Touch In Inappropriate Places and 10 Unusual Statues And Monuments From Around The World.