Australians are known for their larrikin sense of humor. We are also a generous lot and like to raise money for our local community organizations. Raffles, lamington drives, and charity balls tend to become a little boring, and community fundraising committees are always on the lookout for new and interesting money-raising ideas. So, combine humor, community spirit, and the need to create a bit of fun, and you end up with some of the wackiest events Australia has to offer.

Some events lasted only a short time, such as the local in one rural town who spent an entire weekend sitting on a dunny on the back of a pickup truck outside the local pub to raise funds for the Royal Flying Doctor Service. However, many events which started off as a bit of a joke surprised even the organizers with how popular they’ve become.

In August each year, the dry bed of the Todd River in Alice Springs is the unlikely venue for a boat race. It was originally ran as a tongue-in-cheek jest at the British-style rowing regattas which still occur in major cities.

Back in 1962, members of the local Rotary Club met for a picnic by the dry creek bed, talking about fundraising ideas. One member was actually joking when he suggested running a “boat race” in which “rowers” carried their boats down the dry river bed. However, the idea caught the imaginations of the locals, and the Henley-on-Todd Regatta has become an annual event in the middle of the outback.

The madcap event sees teams of “rowers” run down a dry creek bed holding up their makeshift “boats” around them, much like Fred Flintstone’s car in the 1960s cartoon. Participants must craft their own boat large enough to enclose a crew of four to be run down the river bed. Fancy dress is strongly encouraged, which adds to the overall fun atmosphere of the regatta.[1] 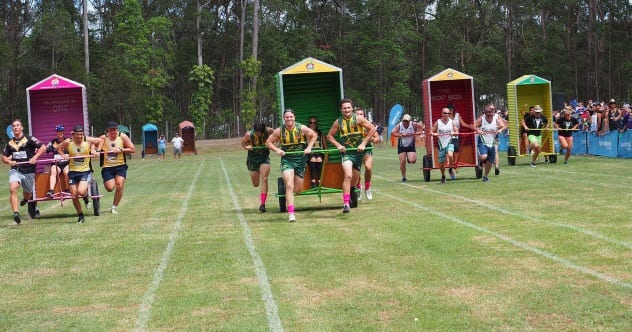 Few things are more typically “Australian” than the old bush outhouse, or “dunny” as we call it. So it should come as no surprise that this has been incorporated into Australia Day celebrations on Queensland’s Sunshine Coast.

In January each year, teams of five gather for the annual Dunny Race.[2] Four team members push and pull a portable dunny on wheels, while the fifth competitor sits on the “throne” for the mad dash for the finish line.

The Dunny Race is but one part of an overall wacky Australia Day festival. Other typical Australian activities on the day include a Weetbix-eating competition, thong-throwing contest, and a crab race. Like all great Australian festivals, there is also plenty of beer.

In July each year, the Darwin Lions Club holds a fundraising regatta with a twist.

Unlike their mates in Alice Springs, the boats do actually take to water on Mindl Beach. The catch is that the boats have to be made out of recycled beer cans. Contestants spend several months preparing their vessels in the hope that their boats will actually float. Many don’t. They must also consume a lot of beer in the name of charity along the way.

Participants race around a set course, trying to sabotage the opposition along the route. From water cannons to flour bombs, almost anything goes to try to capsize the other boats. A secret object is hidden along the route, and the winner is the crew who successfully brings this back to land. It is perfectly acceptable to steal the object from other crews.

The Darwin Beer Can Regatta is certainly one of the wackiest fundraisers you will see in Australia.

There is an Australian saying that people would “bet on two flies crawling up the wall.” The Story Bridge Hotel in Brisbane certainly takes insect racing to a new level.

The street is closed off, with “stadiums” erected around the “arena,” where patrons can view the races in comfort. The program of events includes a “steeplechase” where the cockies have to climb over a hose. Competitors buy and “train” their cockies prior to the event, giving them hilarious names under which they compete on the day.

It’s possibly not an event to consider if you aren’t partial to insects.

Carrying your new wife over the threshold has been a time-honored tradition. However, would you believe the Australian town of Singleton has held the Australian Wife Carrying Championships since 2005?

The event is held as a novelty item at the annual Singleton Agricultural Show and was inspired by the World Wife Carrying championships, held in Finland each year since 1992.[5] Contestants have to traverse an obstacle course with their wives on their backs.

The couple with the fastest time are declared the Australian champions. The winners also have the opportunity to travel to Finland to compete in the World Wife Carrying Championships.

In January each year, the South Australian town of Port Lincoln holds a festival celebrating the region’s tuna industry. “Tunarama” provides the usual music, food stalls, and fireworks for local festivalgoers. However, the most popular event in the festival’s program is the annual Tuna Toss.

Back in 1979, a couple of festival committee members decided the festival needed something to liven it up a bit. Noting the way in which local tuna fishermen would toss their catch from the boats up onto the waiting trucks, they decided to start a tuna toss of their own. Like many other unusual events, it caught on, and the Tunarama Tuna Toss is now celebrating its 40th year.

If tossing a large fish doesn’t appeal to you, the festival still gives you plenty of opportunity to sample the local seafood.

The ugly cane toad was introduced into Queensland back in the 1930s in an attempt to control the cane beetles which were affecting local sugarcane crops. Not only did the experiment fail, but the toxic toads have reached plague proportions throughout Queensland, New South Wales, the Northern Territory, and Western Australia.

This, however, doesn’t stop Australians having a bit of fun with them. Many Northern Queensland pubs now hold weekly or even daily cane toad races, where numbers are strapped to the back of the toads, which are placed in the middle of an arena. The first toad to jump out of the arena wins.

The races started on Magnetic Island in Queensland during the 1980s as a fun way of raising money for local charities. It was so much fun that the races have become as viral as the toads themselves and can be enjoyed in many Queensland pubs.

Remote rural communities have always had to invent their own fun. So when a group of landowners and stockmen came together to organize a fundraising horse race on the border of Queensland and the Northern Territory back in 1882, little did they know that it would turn into a major event on the Australian racing calendar.

Today, the population of the tiny town of Birdsville on the edge of the Simpson Desert explodes from around 140 to thousands as hundreds of horses and thousands of spectators converge on the middle of nowhere for the annual race in September each year. Unlike more prestigious events, racegoers camp out in tents under the stars, consuming some 80,000 cans of beer.

Like most Australian events, the emphasis is on fun. Fancy dress is the order of the day, with a host of fun activities organized across the week raising funds for the Royal Flying Doctor Service. From fun runs and sack races to a “mock race” where toy horses are pulled by strings along the main street, the Birdsville Races have turned into an annual festival of fun.[8]

Man has always dreamed of flying, as exemplified by the tale of Icarus in Greek mythology. In March each year, birdmen from around Australia converge on Melbourne for the annual Birdman Rally, part of the Moomba Festival.[9] Competitors spend months designing and building their wacky flying contraptions before launching themselves into the Yarra River in the name of charity.

Homemade gliders, more serious aircraft, and simply hilarious birdman costumes line up to compete for both distance and entertainment value. The wackier the better, and points are given for creativity and humor. The aim is to make it to the other side of the Yarra River, although competitors inevitably end up plunging into the water.

Winners’ scores are based not only upon how far they can “fly” but also on how much money they have raised for their chosen charity prior to the event.

Yes, Australians will bet on just about anything, including rubber bath duckies. On the far south coast of NSW, the Narooma Rotary Club holds an annual “duck race” as one of their major community fundraisers.

Each Australia Day, 1,000 numbered bath ducks are dropped into the estuary off the local bridge to “swim” downstream. Locals take a ticket and urge their duckie on from the foreshore. The first duck to reach the town wharf is declared the winner. Meanwhile, local surf club members take to the water in kayaks to rescue wayward ducks that wander off course and are subsequently “disqualified.”

The duck races have been running for over ten years and are a firm fixture on the local Australia Day calendar. Locals vie for prime spots along the foreshore to watch the races.[10]

Lesley Connor is a retired Australian newspaper editor who provides travel articles for online publications and her own travel blog.

Read about some more strange events on 10 Totally Cringeworthy Events That Were Broadcast Live and 10 Shocking Events That Happened At Conventions.