We all watched Sesame Street as a kid, and we’ve all seen Oscar the Grouch. He’s the furry, green, grouchy fiend who lives in a trash can and sings about how much he loves trash. A chronic complainer, Oscar is always up for bringing things down in a very real way. Whether you love him or hate him, as a child, he was one of my favorite characters on Sesame Street. Most if not all of us remember and can sing Oscar’s trademark song “I Love Trash” from memory. But there are many things about the beloved grouch that most of us don’t know. We think you’ll enjoy reading these wacky facts about Oscar. 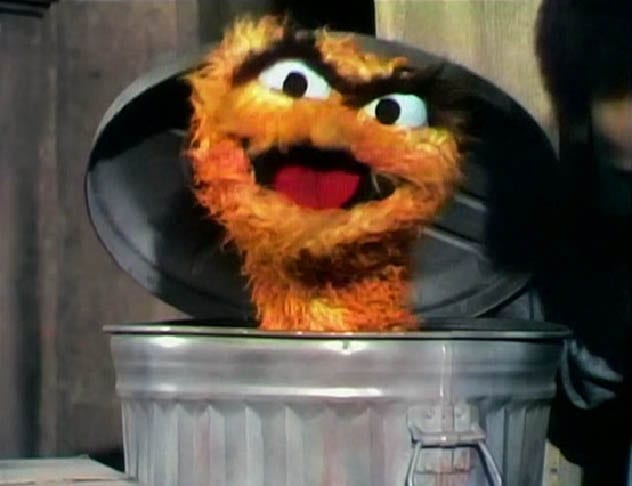 Jim Henson’s original idea for Oscar was for him to be purple. Despite this fact, in the first season in 1969, he was actually orange. It wasn’t until the following year that Oscar the Grouch took on his trademark green color.

In order to explain the switch from orange to green, Oscar in a couple of extraordinary interviews explains about a visit to Swamp Mushy Muddy for his vacation. He says the dampness caused him to be covered in mold, therefore explaining his overnight color change. 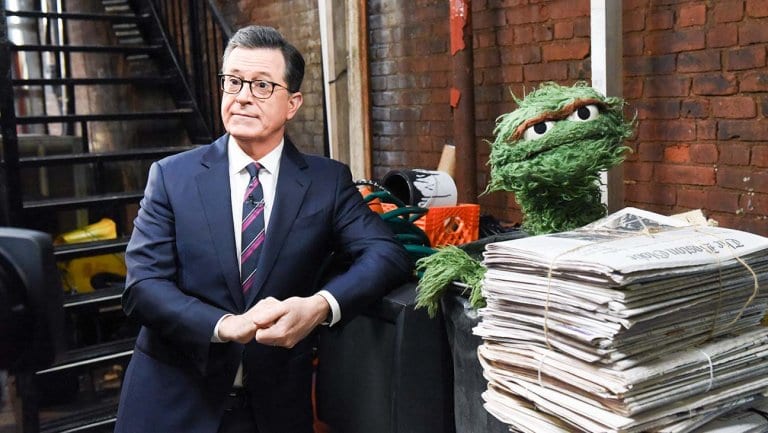 The most recent visit Oscar had with a political commentator was his April 2019 visit to Stephen Colbert’s The Tonight Show during which they performed a duet together and discuss the state of the world as it pertains to politics. Then Colbert tricks Oscar into admitting it will all get better.

In 2012 on the Daytime Emmy Awards, Oscar got together with Anderson Cooper to help officiate the awards. Anderson clearly has a blast talking with Oscar and Oscar sang a song about how much he hates the daytime. Naturally we all recognize what’s going to happen next, Anderson reminds Oscar that his show is in the daytime which appears to bum Oscar out even more. 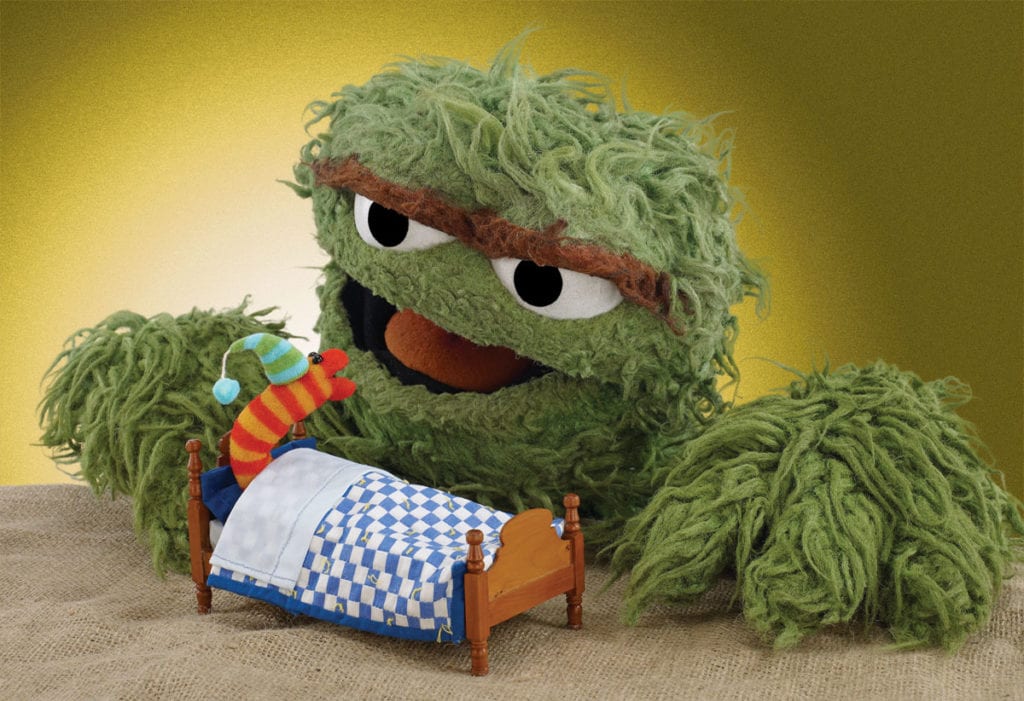 Over the years Oscar has had a menagerie of pets, with his most favorite being Slimey the Worm. We all remember Slimey the Worm and his impressive feats. He was the first worm on the Moon and he often helped Oscar when no one else could. For example, Oscar locked himself in his can on one episode and Slimey pushed a key through the top of the lid for him.

In fact, Sesame Place Theme Park loved Slimey so much; they produced a plush doll of him in 2017.

Oscar’s other pets have included ants, elephants, goats, skunks, donkeys, pigs, and a hippo and rhino just to name a few. 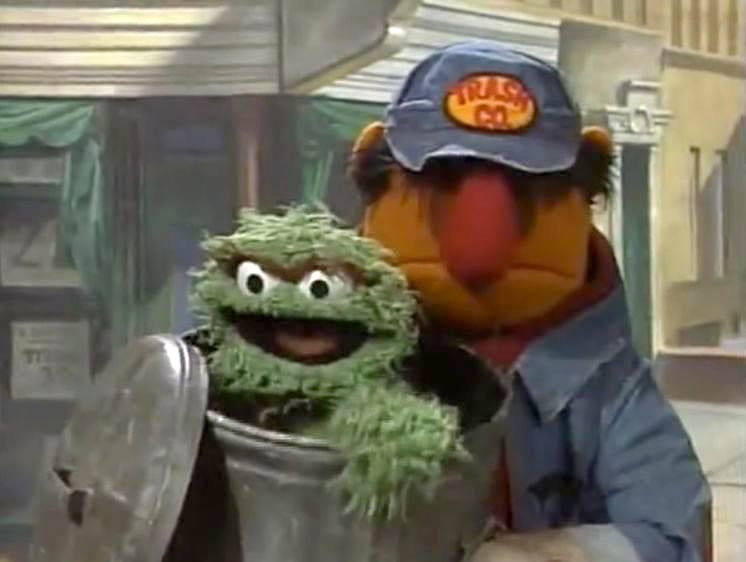 Most of us know from watching Sesame Street as kids that Oscar is not stuck to being just in his trash can all the time. Although he presumably could have if he had chosen to, since he has an Olympic sized swimming pool in there! Did you know Oscar even found a way to walk around? Oscar put two holes in his trash can so he could force his legs through them and convey himself and his trash can wherever he wants to. Of course he had a bit of help from the actor Hervé Villechaize who becomes the puppet’s legs.

But that’s not the only way Oscar gets around. Oscar actually appears to have multiple forms of transportation. One of those other forms is Bruno the Trash Man. Bruno is a mostly silent guy who carries Oscar around in his trash can to wherever he wants to go.

While these are the main ways Oscar gets around, they positively aren’t the only ones. In The Adventures of Elmo in Grouchland, Oscar has a portal in his trash can that goes directly to Grouchland.

Finally, in one episode of Sesame Street, Oscar dug a tunnel between his trash can and the trash can at Mr. Hooper’s store. As a result, where there’s a will, there’s a way with Oscar; if he wants to go somewhere, he will get there, even if means digging a tunnel, opening a portal or getting chauffeured around by a sanitation engineer. 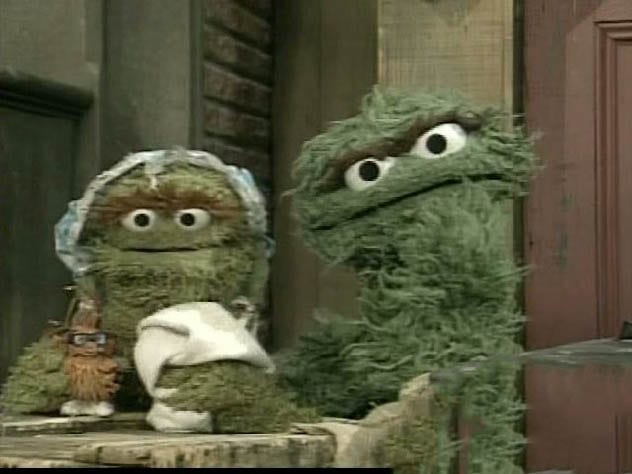 Oscar is so grouchy, that we can’t imagine him having a family, but he does. His mother Mrs. Grouch likes to drop in on him frequently to make sure he’s still as grouchy as ever. She constantly worries that the other people on Sesame Street are going to alter him into a nice puppet. When she visits, Oscar will sometimes mock her by saying please, but much to his disgust when he does, she washes his mouth out with vanilla ice cream.

Granny Grouch is Oscar’s grandmother, though we don’t know from which side of his family since this is never explained. Granny’s choice thing to do is place big wet kisses on Oscar, which we all know he hates.

Earnest, Oscar’s brother lives in Chicago, and in fact knows Mr. Hooper’s brother. On one visit, Oscar decorated his trash can, cleaned up and acted really nice towards Earnest. However, Oscar’s plan backfired; Earnest is just as nice back. Neither could maintain the niceties in the long term, and they started fighting not long after.

We never perceived it, but Oscar also has a sister whose name is Bunny. Mrs. Grouch named her Bunny just to displease her, and she succeeded. Bunny only appears on Sesame Street one time for Grouchy Mother’s Day, as a surprise for Mrs. Grouch. According to Oscar, the reason she doesn’t visit routinely is that when she does they argue.

Oscar even has a niece, although like some of the other characters in his family, we don’t know who her parents are. Irvine (pictured) appears on Sesame Street in several episodes because Oscar is her babysitter. A few times when he has to run an errand, Maria watches Irvine for him. It is next we discover that in order to get Irvine back to sleep, you have to start a loud argument. If you want her to eat, you have to set the food within reach, and then tell her she can’t eat it. 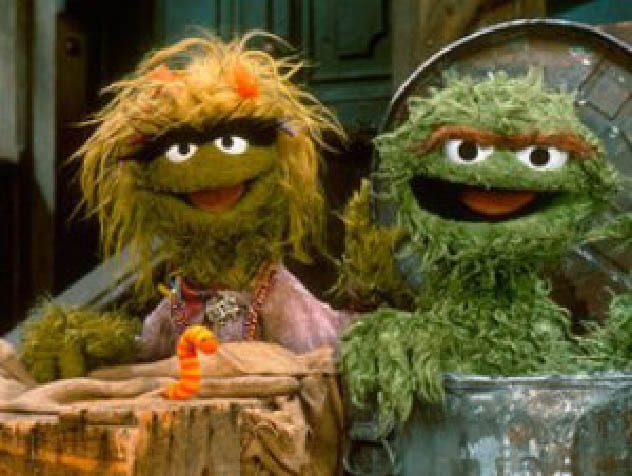 We have no idea how Oscar can be in a romantic relationship with anyone, but he has a girlfriend named Grundgetta. Apparently they are also the dearest of friends. Like Oscar, Grundgetta has several pets including Sylvia, her worm, a rottendoodle named Itchy, and a muddy piglet that she claims won the prize for Yucchiest Pet.

The spelling of Grundgetta’s name is a bit controversial and has changed back and forth between Grundgetta and Grungetta.

In 1993, Applause created a plush doll version of Grundgetta.

Oscar sings about a tattered sneaker his mom gave him when he was a baby in his trademark song, I Love Trash. We think maybe he merely says that to make Mrs. Grouch happy. We remember earlier episodes of Sesame Street where Oscar sings I Love Trash and can be seen gathering the items he mentions in the song out of his trash can. These included a nasty newspaper wrapped fish, one of his favorite pieces of trash. This signature song was written and composed by Jeff Moss expressly for Oscar. 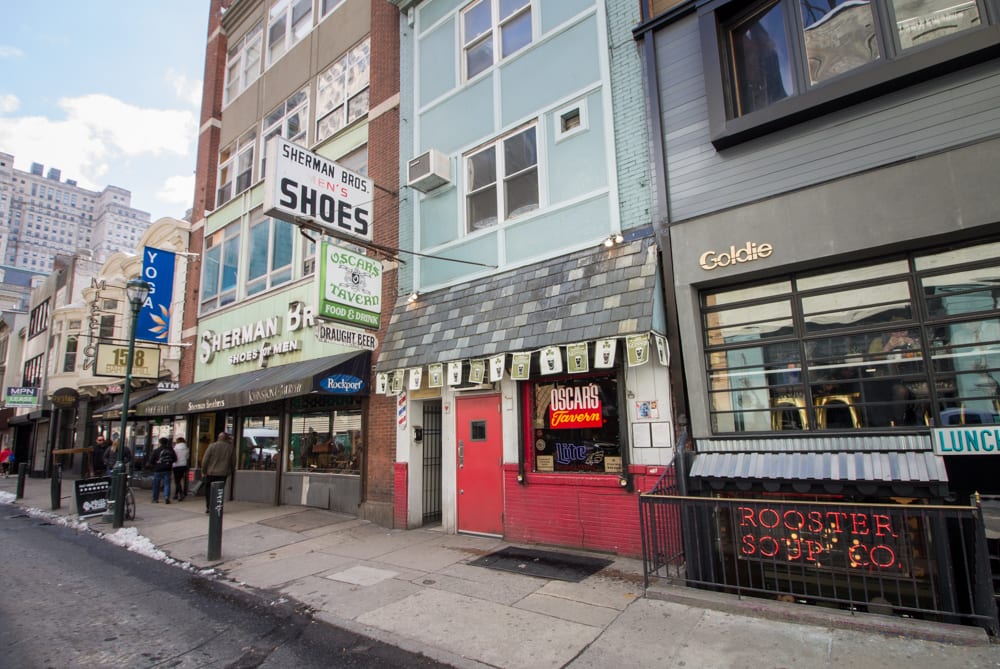 We discovered the inspiration for Oscar the Grouch came from a waiter at Oscar’s Tavern in Manhattan. The waiter is exceptionally rude and surly to Jim Henson and Jon Stone on one of their visits that rather than being offended, they are entertained. In fact, the waiter is so amusing, Jim and Jon visit the restaurant frequently just to see this waiter.

The voice for Oscar was inspired by a cabby in the Bronx that Caroll Spinney encountered when he needed a ride to work. The man possessed a gravely, raspy voice and spoke with a New York accent out the side of his mouth. Spinney determined that it was the appropriate voice for Oscar and continued to mirror the cabby’s voice as Oscar for decades to come. 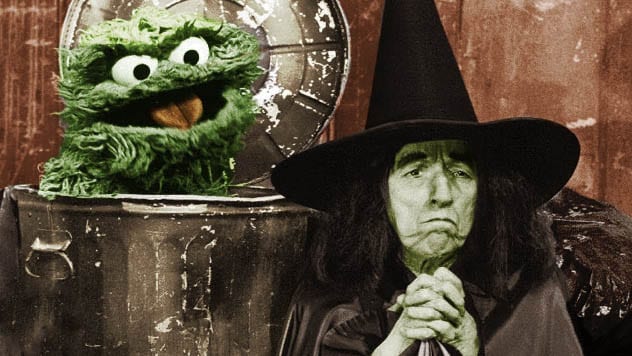 We never thought we’d see the like, but after some serious digging we found out that Oscar has indeed been in love…and it wasn’t with Grundgetta. Ouch! We discovered that Oscar once fell in love with the Wicked Witch of the West. It was even suggested that he was so grieved by her rejection that this was why he turned from orange to green and why he is so grouchy. However, since the episode in question was banned for some reason, we likely will never know for sure. 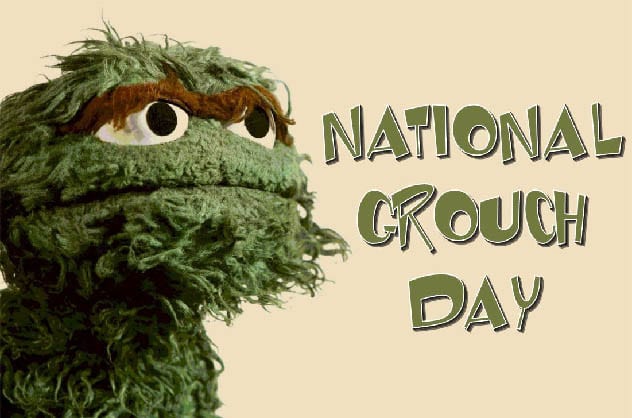 We love Oscar the Grouch. In the end, it doesn’t really matter if you appreciate or detest him, he has shaped generations of kids. He encouraged them to understand it’s allowable to be a little out of sorts sometimes. Oscar taught us all that less than positive feelings are normal and permissible, and that lesson is one we can all stand to be reminded of.