Ten years ago on this day I published the first list on Listverse. When I started out I was trialling a few other sites too, which ultimately didn’t catch on but Listverse did well from the very first day thanks to social media sharing.

Over the following ten years we had many monumental changes, including four redesigns, a change of chief editor (and a reversion back to me as chief editor), staff coming and going, and we switched from a free model to a paid model for our writers.

It seems fitting that our grandest and most expensive site overhaul would come in the year of our tenth anniversary. Work is progressing at a rapid rate and we are expecting to launch the new site around September this year. Here’s a sneak peak of the redesign: 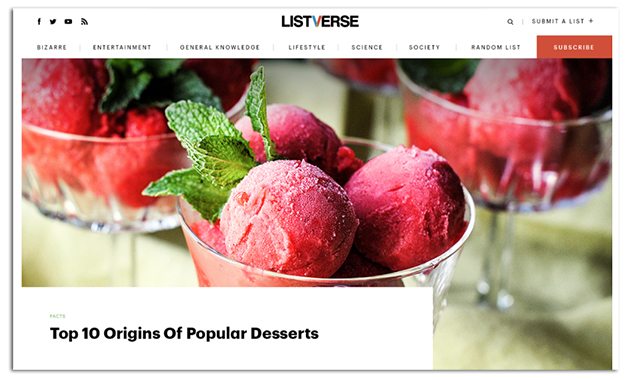 In the lead up to the redesign, and in the ongoing effort to make the site more enjoyable and accessible, we have stripped out all non-standard advertising. That means there are no sticky footer ads, no popup ads, no resizing ads, and no auto-play audio ads.

We have also made many changes in the back end to speed the site up. We are now using a content delivery network in the cloud to ensure that files are delivered from as close to each reader as possible, as well as routing traffic to hubs around the world. This doesn’t just help with speed: it also helps prevent downtime.

The main focus of the redesign is for speed of loading and a beautiful mobile experience as our mobile traffic is now significantly bigger than it was when we launched a decade ago. There will, of course, be ads, but they will be fewer in number and more strategically placed to ensure that the revenue can continue to support the business with the least annoyance to you.

In closing, I need to thank everyone who has been involved in the growth of Listverse. If it wasn’t for the tireless efforts of the moderators, writers, and most importantly you, the reader, we wouldn’t be here today, ten years on, celebrating a decade of top 10 lists!