While most children around the world hope for a visit from Santa on Christmas Day, in some parts of the world different tales are shared during the holidays. On this list are some of the creepiest Christmas creatures you and your kids should hope to never encounter. 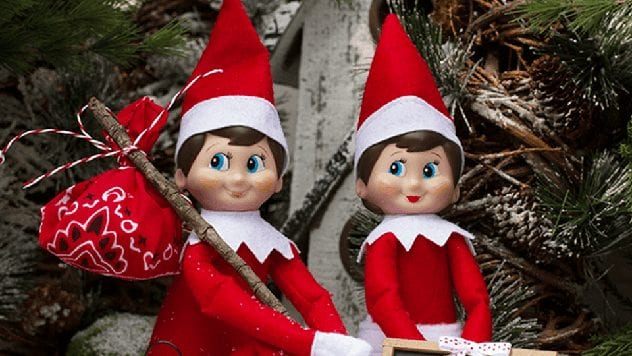 The Elf on the Shelf is not a monster per se, but what started out as a cute new tradition for Christmas is starting to terrify kids instead. A little miniature elf is being sold as “Santa’s special scout to help manage the lists of who’s been naughty or nice”.

Unfortunately the little elf doll kind of resembles a creepy clown that is scaring kids instead of making them excited about Christmas presents. There are many stories now on the Internet of people setting up cameras in their home and then catching these elves moving about, and even using the toilet and flushing it! Some children are so scared of the elf that they can’t sleep until, their parents remove it from where they can see it. 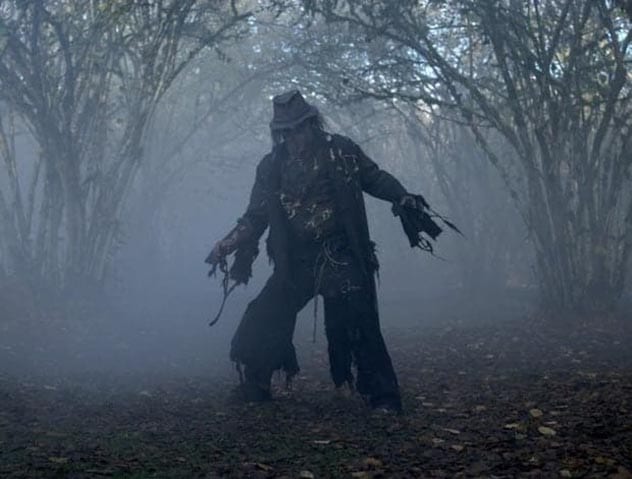 The German story of Hans Trapp is said to be based on real life Hans von Troth who was allegedly a satanist and just all-round bad person. The Catholic Church got tired of his fights with his neighbors and other evil habits and banished him to a forest.

While in the forest, Hans Trapp began craving human flesh to the point where he made himself up to look like a scarecrow, stabbed a young boy to death and cooked him. However just as he was about to start feasting, Trapp was struck by lightning and died on the spot. Now Trapp is said to be one of Santa’s helpers who punish naughty children at Christmas while wearing his scarecrow outfit. 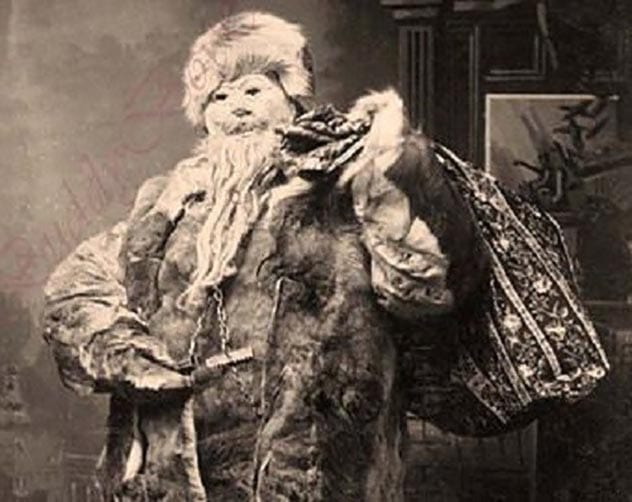 Belsnickel is a angry-looking man in fur (the opposite of Santa really) that comes to visit children in the days leading up to Christmas. He has a bag of sweets and nuts in one hand and a wooden switch in the other. Throwing the sweets on the floor, he would whip the children who grabbed them.

Children are also told to recite Bible verses or poems and are sternly warned by Belsnickel to be good before Santa arrived. The tale of Belsnickel is told in Germany, France and Switzerland and takes different forms such as an animal-figure wearing a horned mask of a tiny white creature with the ability to slip through a keyhole. 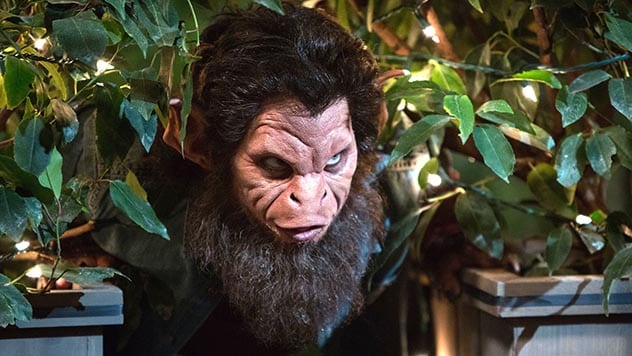 Goblins known as Kallikantzaroi come out from their underground lair during the twelve days of Christmas according to a tale told in Southeastern European countries.

A child born during these days, also known as the unbaptized days, are said to have a great change of turning into a goblin once they are grown-up. In order to prevent a new-born baby from turning into a large, hairy goblin with many different animal parts when they are an adult, the baby should be bound in straw or garlic or have its toenails singed. Another way to keep them away is to leave a colander outside the door. These goblins can’t count higher than two and will be distracted trying to count the holes in the colander and disappear again at dawn. 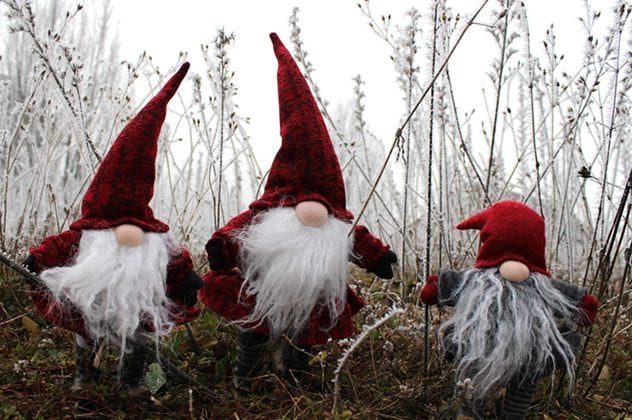 The Tomte, according to Scandinavian legend, is a gnome-resembling creature out to protect farmers and their farms. These beings wear farmer clothes and are old with long beards and incredible strength.

It all sounds very good until a Tomte is offended by something a farmer does such as change the way the farm is run or abusing the farm animals. Once a Tomte is angry it has the ability to drive people insane or it will even bite them leaving behind a potentially fatal poison. Smaller offenses such as forgetting to add a spoon of butter on the Tomte’s bowl of porridge on Christmas Eve will cause it to wreak disaster on the farm. 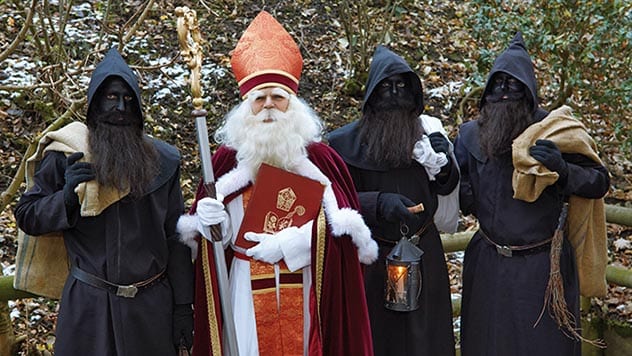 Claude Claus, also known as the Anti-Claus, is said to be Santa Claus’ evil twin brother who was given up for adoption. Santa and Claude’s mother was convinced by a soothsayer to give Claude up as he was evil and should not grow up with the good child Santa. Therefore she left Claude on the doorstep of a church where he was taken by an equally evil couple who abused him.

He eventually killed them both initiating a killing spree that is said to carry on to this day. After learning who his twin brother is, Claude became even more evil, creating Dark Christmas when his mission to take over Halloween failed. He travels in a black sleigh headed by hell hounds and a lone werewolf delivering gifts to the evil on Dark Christmas day, 26 December. He also attacks Santa’s sleigh in mid-air leading to bright fireworks. 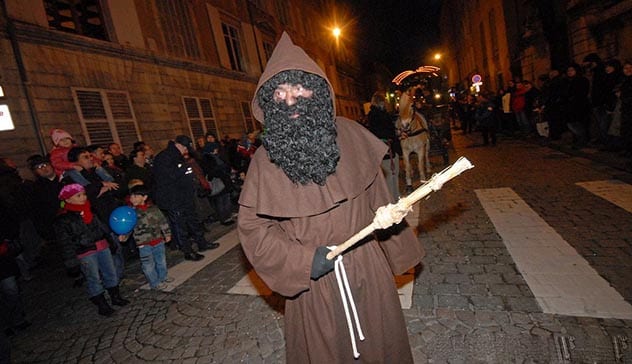 Père Fouettard was a butcher , according to legend, who murdered three children in 1150. There are various versions of the story including that his wife drugged the children, slit their throats and then cooked them.

St. Nicholas came to the rescue of the children, brought them back to life and reunited them with their families. He chided Père Fouettard for his crimes and punished him by forcing him to become his helper for eternity. In Eastern France the tale now goes that Père Fouettard goes by Le Père Fouettard and accompanies St Nicholas when he delivers gifts to children. He has a creepy old face, long beard and carries knapsack in which he kidnaps naughty children as well a whip to beat them with. 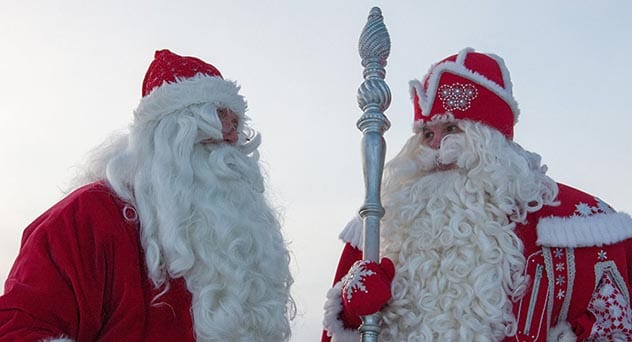 A Joulupukki is a Yule goat-like creature from Finnish lore that scares children during Christmas time. They have mean ugly faces with horns and go around demanding gifts from children. Historically Joulupukkis could be warded off by prayer and certain rituals.

Strangely enough, there is now a modern day tale about Joulupukkis that make them sound a lot less evil. This story includes them resembling Santa, giving out presents during the day when it’s Christmas time and conversing jovially with children. It is unknown why the creature turned from bad to good but both tales are still popular in Finland. 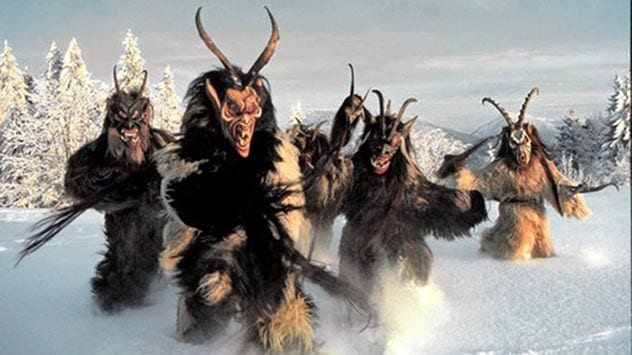 Demons called Straggele sometimes accompanies a creature called Frau Perchta in countries such as Switzerland and share some of the goodies left out by humans who hope to escape punishment and receive favor in the form of wealth and good health from Perchta.

However, this is not the only reason these demons are out and about on Christmas Day. Sometimes Perchta leaves the punishment of children to these awful demons and they take full advantage of this opportunity by robbing children who haven’t been particularly good. Then they gather the children up and fly away with them only to rip them apart during flight. 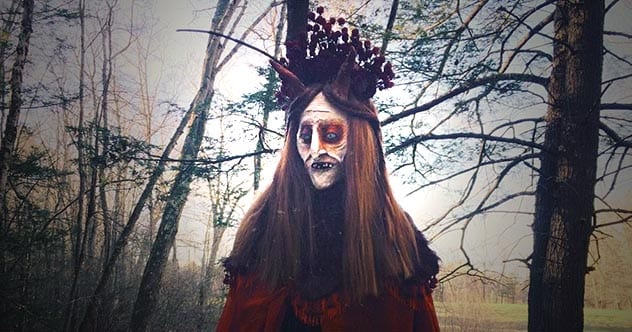 As mentioned above, Frau Perchta is a creature sometimes described as a witch or beast that has two faces, one for good children and the other for naughty children. Starting out with good deeds, she leaves silver in the shoes of good children on the 12th day of Christmas.

The naughty children would do best to run for their lives however, as Perchta is wont to slice open their stomachs, remove their internal organs and stuff their ruined bodies with straw and stones. It is unknown what she does with the organs after removing them but most likely they end up being a Christmas feast for her and the Straggele. Rumor also has it that Perchta is a shape-shifter that can take any form.

For more lists like this, take a look at 10 Mythological Creatures That Really Existed (Sort Of), and Top 10 Living Creatures We Patented Or Tried To Patent.