The name Genghis Khan is known the world over. His Mongol horde conquered half the world. His empire encompassed everywhere between the Caspian Sea and the Pacific Ocean and covered an astonishing 23 million square kilometers (9 million mi2), making it the largest contiguous empire ever. Genghis Khan managed to conquer more land in his 25 years of pillaging than the entire Roman Empire captured in 400 years.

His army was certainly ferocious. Soldiers of the defeated armies were not destined for a happy end. They were often beheaded, disemboweled, or occasionally even forced to swallow molten metal. Whole cities were razed, and prisoners were slain or made to march in front of the army to act as a shield.

However, though his name is now synonymous with barbarity, Genghis Khan was a leader with some surprising qualities. 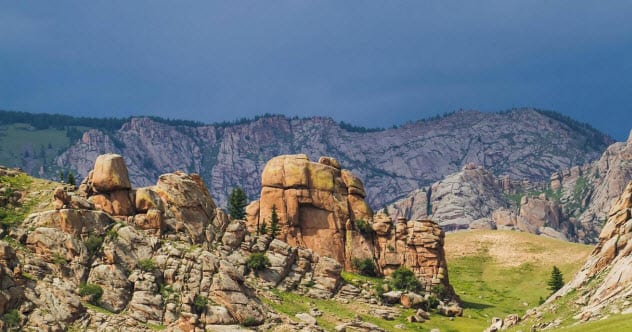 Genghis Khan was a personally modest man. He did not build monuments to his achievements. Even in death, he wanted to remain humble. Other men in his position might have built themselves elaborate memorials as the pharaohs did in Egypt. Genghis, however, decreed that he should be buried in a secret place in an unmarked grave.

After his death, his faithful army honored his wishes. They carried his body home, killing anyone they met along the way so that those individuals could not disclose the location. Genghis’s men dug the grave somewhere in the remote mountains of Mongolia or perhaps in the wide plains, depending on whom you believe. Then they rode a thousand horses over and over the grave to tamp down the earth and disguise the location.

After Genghis’s burial, the slaves who dug the grave were said to have been slaughtered and his soldiers planted a grove of trees over the burial site. When the army returned home, they were killed by their comrades to prevent them from revealing the site of Genghis’s remains.

Today, archaeologists and treasure hunters still seek the grave, hoping to find the final resting place of the great Mongol leader and, just possibly, the hoard of treasure that was rumored to be buried with him.[1]

9 He Instituted A Writing System In Mongolia 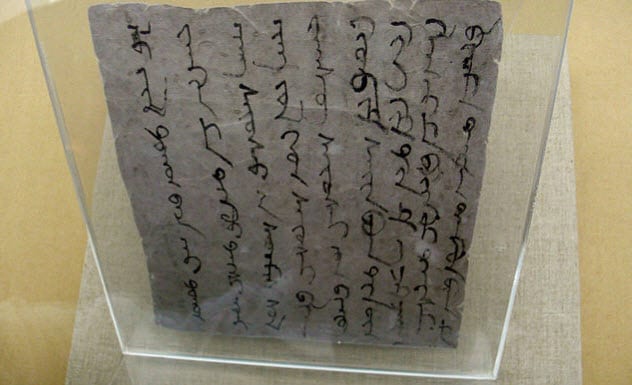 In 1204, Genghis Khan instituted a writing system in Mongolia known as Uighur Script, which has been in continuous use up to the present day. The script was adopted from the Uighur tribes who had been conquered by the Mongol Army.

Genghis showed great foresight in this and demonstrated one of his greatest strengths. When he conquered another tribe, he absorbed their customs and practices into his own, particularly if their systems were superior to his own. In this, he showed much more wisdom than most conquering nations who merely wiped out the previous culture without consideration.

Genghis Khan attached great importance to the ability to read and write. He instructed that all children of the Mongol Empire be taught to read and that all the laws of the empire be written down.[2]

However, it is likely that Khan himself was not able to read and he delegated this task to his trusted commanders.

8 He Ran The Mongol Empire As A Meritocracy 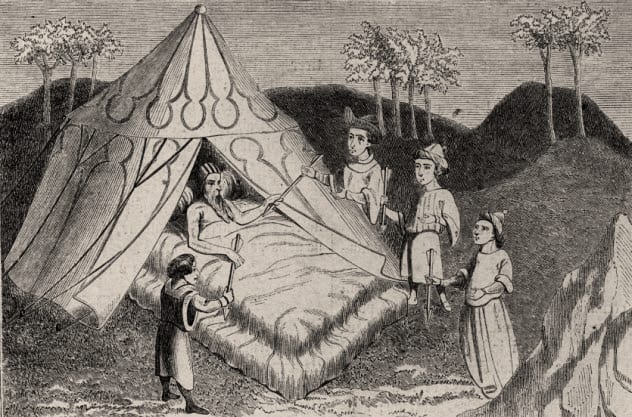 Genghis Khan had a disparate number of tribes and conquered peoples under his control. Most conquering nations have found keeping order among the indigenous populations difficult, and much military manpower is spent quelling unrest and imposing the new order.

Genghis chose a different method. He ran the Mongol Empire as a strict meritocracy. He is quoted as saying, “A leader cannot be happy if his people are not happy.”

Positions were filled with reference only to the abilities of the candidates. Promotions in the armies were based on abilities and provable results. Even within his own family, he adopted the same processes. On his deathbed, he tasked his advisers with nominating his successors (admittedly from his own family) based only on their ability to succeed.[3]

7 He Rebuilt The Silk Road 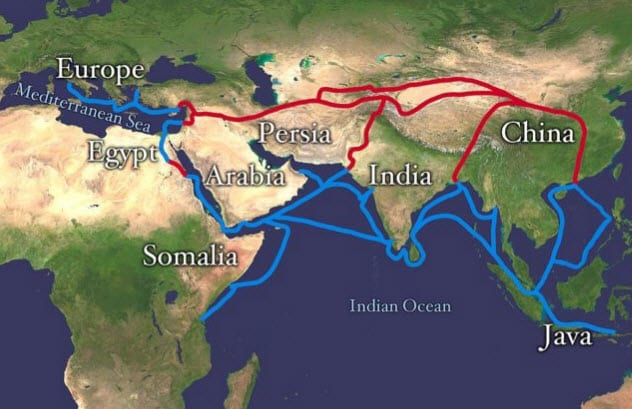 The Silk Road is the name given to the trade route which ran overland through China, India, and Southeast Asia to the lucrative markets of Europe. It had fallen into disuse because it was so dangerous. The wide expanses that traders had to cross were a haven for brigands.

Under Genghis Khan’s rule, the whole Silk Road trade route fell under his control—a distance of over 7,000 kilometers (4,300 mi). The period after his conquest of the area became known as Pax Mongolica, a period of calm and stability which enabled traders to pass unhindered along the route.

The trade caravans transported silk and other precious items, such as pearls, gems, spices, precious metals, carpets, and medicines. In addition, the local economies prospered by providing refreshments for the travelers. This was organized by the Mongol authorities.

The Silk Road became so safe that it was said that “a maiden laden with gold could travel it and go unmolested.”[4]

6 He Developed A Strict Code Of Law 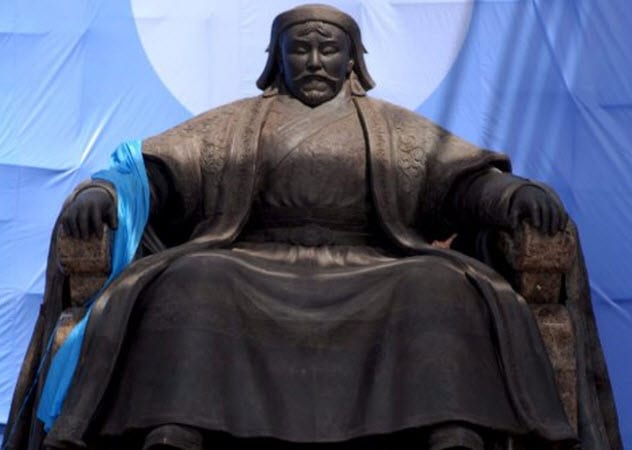 The popular view of the Mongol horde is that of an unregulated band of ruffians raping and pillaging at will. In fact, the Mongol society was generally a very ordered and law-abiding one when it wasn’t out conquering. Genghis had a Yasak, or code of law, drawn up which detailed the behavior expected of its citizens and the punishment for those who broke the rules.

Every citizen of the Mongol Empire was expected to abide by these rules, including Genghis himself. Uniquely, for the time period, Genghis did not claim any divine authority for these laws but only the authority of his power.

Among the forbidden practices were kidnapping, animal rustling, stealing, and, perhaps surprisingly, slavery (though only for fellow Mongols). Other decrees included raising the minimum age of service in the army to 20 years old. Also, no one was to be considered guilty of a crime unless he was actually caught in the act or confessed of his own accord.

On his deathbed, Genghis Khan is believed to have said of his followers: “If they depart from my Yasak, the realm will rock and crumble.” This seems to have been something of a prophecy because his empire was completely destroyed within 150 years and no copies of the Yasak remain.[5]

5 He Looked After His Army 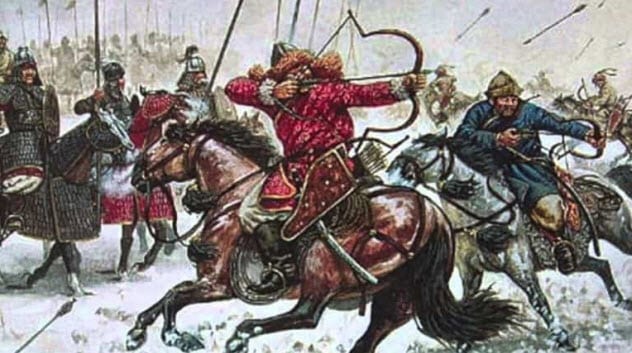 The welfare of his troops was said to be a particular concern for Genghis Khan. Supposedly, he said of them, “I want to feed them with juicy meat, let them live in beautiful yurts, and let them pasture their livestock on rich soil.”

If a soldier was lost through the neglect of his commander, then the commander was punished. And if a wounded soldier was left on the battlefield, his commander would be executed on the spot. All of this led officers in the army to go to great lengths to ensure the well-being of the men under their command. The army worked on a system of mutual loyalty which was so powerful that it allowed them to conquer the world.[6]

Soldiers in the Mongol army were not paid. Instead, they received an equal share of the spoils of war. This ensured that all the troops had a vested interest in victory. If a soldier died in battle, his share of the spoils was passed on to his family so that they were provided for. 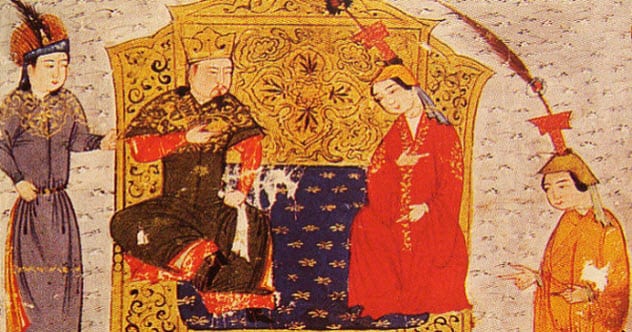 Women of Mongolia were certainly much freer than their neighbors in China or Persia. They were able to ride horses, fight in battles, tend farms, and participate in the politics of the day.

Though most women still had fewer rights than men, some women wielded great influence in the Mongol Empire. Women held public office and took major roles in the administration of the empire.[7]

The kidnapping of wives was specifically prohibited by law (Genghis Khan’s wife had been kidnapped), as was the practice of selling women into marriage against their will.

While it would be quite a stretch to call Khan a feminist, it is certain that women enjoyed more rights and greater safety under the Mongol Empire than they might have experienced anywhere else in the world at that time. 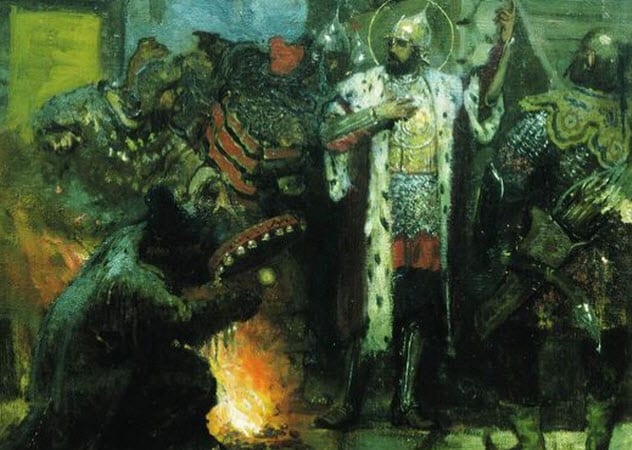 Genghis Khan was a Shamanist, as were most Mongols at that time. Nevertheless, he promoted tolerance of all religions within his empire. He exempted religious leaders of all denominations from paying taxes and encouraged citizens to practice their chosen religions freely.

He invited religious leaders to meet him for interfaith discussions and was interested in hearing their beliefs. He deliberately chose advisers with a wide variety of religious backgrounds.[8]

His empire was so vast that it was comprised of followers of a large number of religions, including Muslims, Buddhists, Hindus, Jews, and Christians. They were all allowed to practice their religions without interference from the Mongol state. 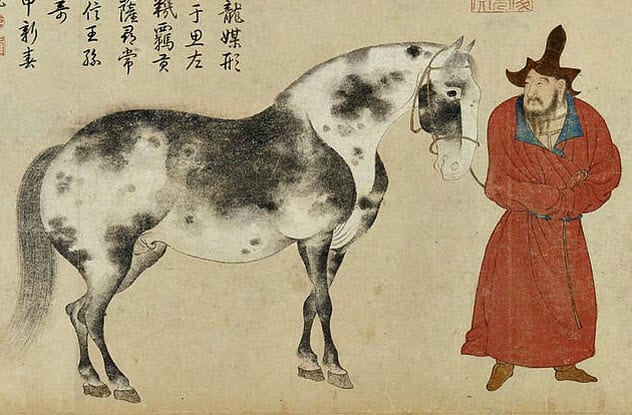 Perhaps one of Genghis Khan’s more surprising accomplishments was the establishment of an organized postal system across his empire. Postal stations were set up for the delivery of official mail, but they were also available for citizens, soldiers, and visitors to use.

The postal systems aided the economy, facilitated the transport of goods along the Silk Road, and improved the quality and reliability of information sharing. Postal stations were arranged 24 kilometers (15 mi) or so apart. Couriers moved between stations and were provided with food and shelter when they arrived.[9]

Foreign observers, such as Marco Polo, marveled at the efficiency of the system. By the end of Mongol rule, there were thousands of postal stations with tens of thousands of horses and couriers at their disposal.

1 He Was A Lover As Well As A Fighter 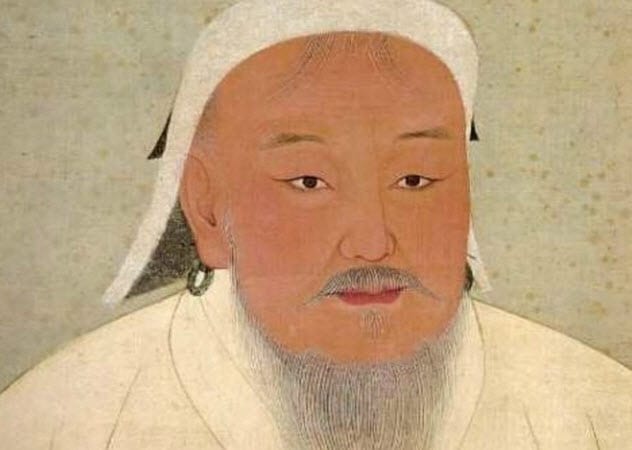 Though Genghis Khan is noted for his military might and undoubted strength as an empire builder, his longest-lasting legacy is as a lover rather than a fighter. And recent findings by DNA researchers suggest that Genghis was quite some lover. It is estimated that there are 16 million men in Central Asia alone who are descendants of the Mongol emperor.[10]

Genghis Khan was known to have had many wives and to have “courted” many more women. After the Mongol horde had taken a town, Genghis was given his pick of the most beautiful women and it seems that he took full advantage of this “perk of the job.” His sons and grandsons were equally as fertile. One of his grandsons had 22 legitimate wives and added 30 virgins a year to his harem.

Though the physical Mongol Empire has long since disappeared, it seems that Genghis Khan may have found a different means of taking over the world.