Valentine’s Day is around the corner and for most this is an opportunity to spoil their significant other and have a romantic day celebrating their love. Some even plan their wedding on this day, turning it into a ‘double-up on love’ day. Weddings and Valentine’s Day always conjure up images of flowers, hearts, chocolates, declarations of love and gorgeous wedding dresses. Around the world however, love is celebrated with a variety of customs and traditions when it comes to Valentine’s and wedding ceremonies. On this list are just a few examples of weird celebrations of love from around the globe. 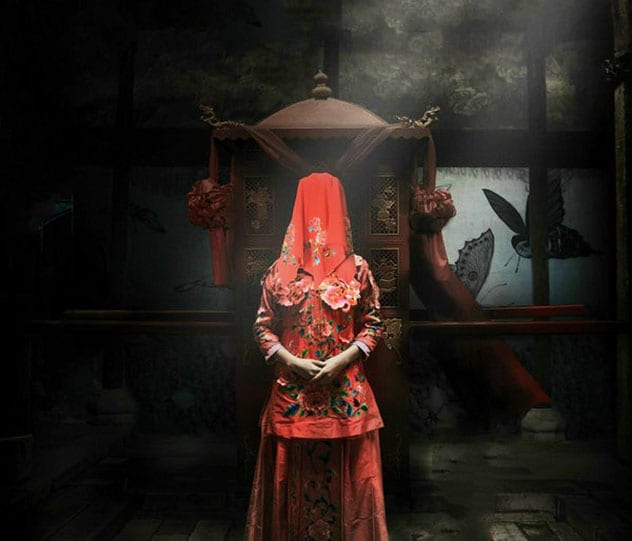 China has a wide variety of wedding customs and traditions. One of the weirder ones that has been around for over 3,000 years is the practise of ghost weddings. When ghost weddings were first performed, they were restricted to a marriage ceremony between two deceased people who were both single while alive.

The deceased ‘bride’s’ family would request a price for the bride and the dowry would include paper tributes such as a large house and expensive jewels. The ‘wedding ceremony’ was then held at the cemetery where the tombstones of the couple were. When the ceremony was completed, the bones of the bride would be dug up and reburied inside the grave of the groom. It was also decided beforehand whether the couple were the right age and whether their family background meant they would be compatible in the afterlife.

In modern times the tradition allows for one of the ‘betrothed’ to be a living person who will then marry a deceased person.[1] 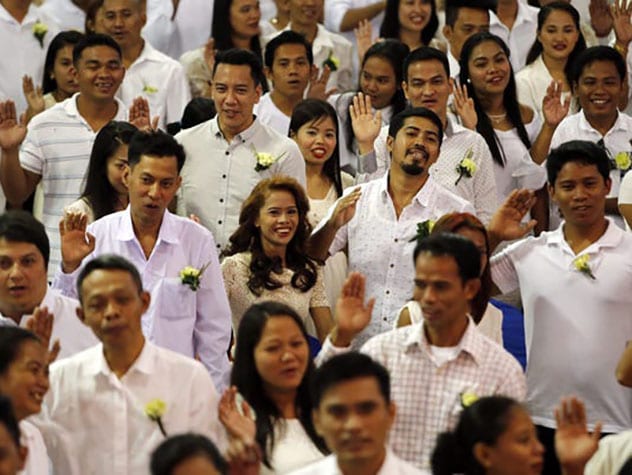 You don’t need to binge-watch Say Yes To The Dress to know that weddings can be incredibly expensive and go way beyond just the dress. There is the transport, venue, flowers, food and music to think about and this can run into thousands of dollars.

The Philippine government started a great custom to help its citizens get married without breaking the bank. Each year on Valentine’s Day couples have the chance to wed in a mass ceremony sponsored by the government. Everything is taken care of including flowers, cake, food, gifts and sometimes even wedding rings. The only thing the engaged couples need to do is get themselves to the venue in their wedding attire and make sure they registered for the event beforehand.[2] 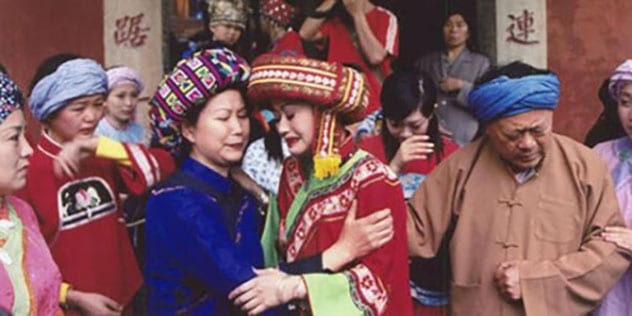 Weddings are traditionally associated with joy, laughter and happiness and all the other appropriate words that describe the feeling two people have when they finally commit their lives to one another in matrimony.

However, some traditions do not believe in taking weddings lightly. For instance, the Tuijia people in China require the bride to cry for at least one hour every day for a whole month before she gets married. In some parts of India, marriage is a case of life and death as certain girls born under the wrong star (astrologically speaking) are believed to be cursed and would bring death upon their husbands. However, if the girl marries a tree and chops it down before marrying her fiancé, the curse will be broken.

In the Congo, smiling is frowned upon at some weddings. Instead, it is preferred that the bride and groom keep a straight face through proceedings because if they break into laughter or even just grin, it means they are not taking their wedding seriously enough. Only when they leave for their honeymoon do they get to take a break from being stony-faced.[3] 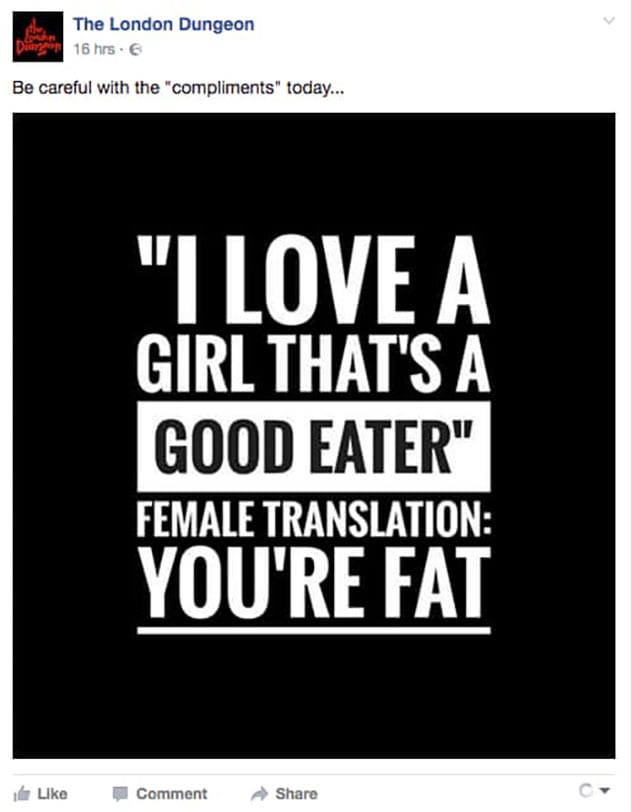 What is Valentine’s Day without a little blood right? For those who love to get their horror-fest on, the London Dungeon likes to put on a display during special holidays and Valentine’s Day is no exception. In 2011, the Dungeon had human heart cupcakes on sale for those who wanted a gross treat while watching a surgical procedure in the Blood and Guts exhibit.

In 2017 however, the Dungeon went too far with its outlandish ideas and was accused of ‘demeaning women and sex workers’ after a series of promotional social media posts for their ‘Dark Valentine’ campaign rubbed people up the wrong way. The posts included “Jack The Ripper just messaged. He wants to Netflix and kill” and “I love a girl that’s a good eater. Female translation: You’re fat.”

A spokesperson for the museum responded via social media and apologized for any offence caused.[4] 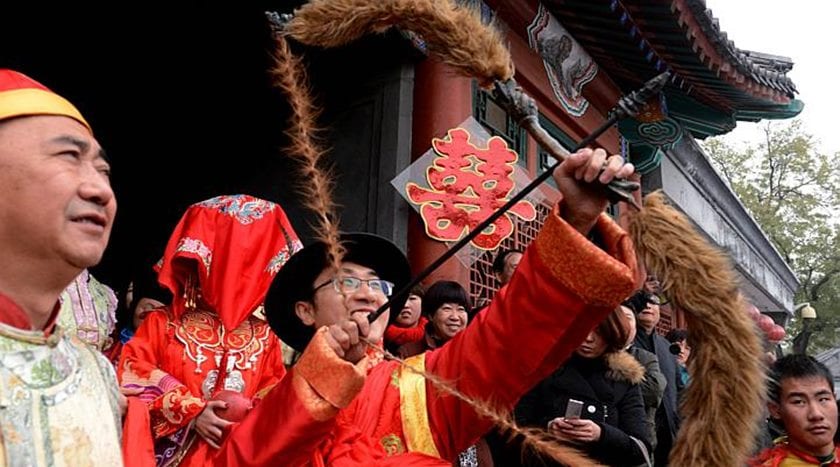 In general, grooms like to protect their brides at all cost and show her how much she’s appreciated. However, in the Yugur culture grooms get to shoot their future bride with a bow and arrow. But it’s not as awful as it sounds. The grooms cut off the arrow heads beforehand. After shooting the blunt arrows at their bride, the groom then breaks the arrows to ensure that the couple’s love lasts a lifetime.

In Scotland, brides don’t get shot at, but they do get sour milk, dead fish, rotten food and feathers thrown at them. As if that weren’t enough, she then must be willingly tied to a tree for some time. Once released, the bride then join her friends for a night out on the town. The thinking behind this custom is that if the bride can deal with this type of harsh treatment, she will be able to effectively deal with obstacles in her marriage.[5]

5 Nail in the coffin 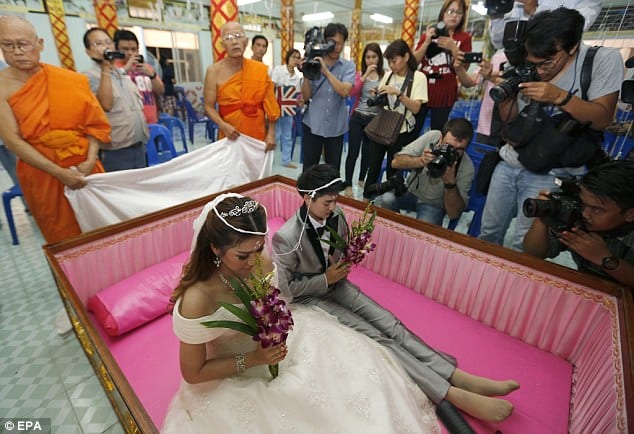 For most people, lying in a coffin while alive would freak them out to no end. Others are willing to risk it for the sake of love. On Valentine’s Day 2015, 10 couples participated in a wedding ceremony at Wat Ta Kien in the Bang Kruay district.

Before the ceremony began, the couples had to make offerings to the monks and then proceed to lay down in a pink coffin. They were then draped with a white sheet and the monks chanted over them as they would over a deceased couple. When the chanting ceased, the monks prayed over the couples and blessed them for their new lives together. It is believed that laying down in the coffin and being prayed over sends all approaching bad luck packing before it has a chance to land.[6]

4 Symbols all over the place 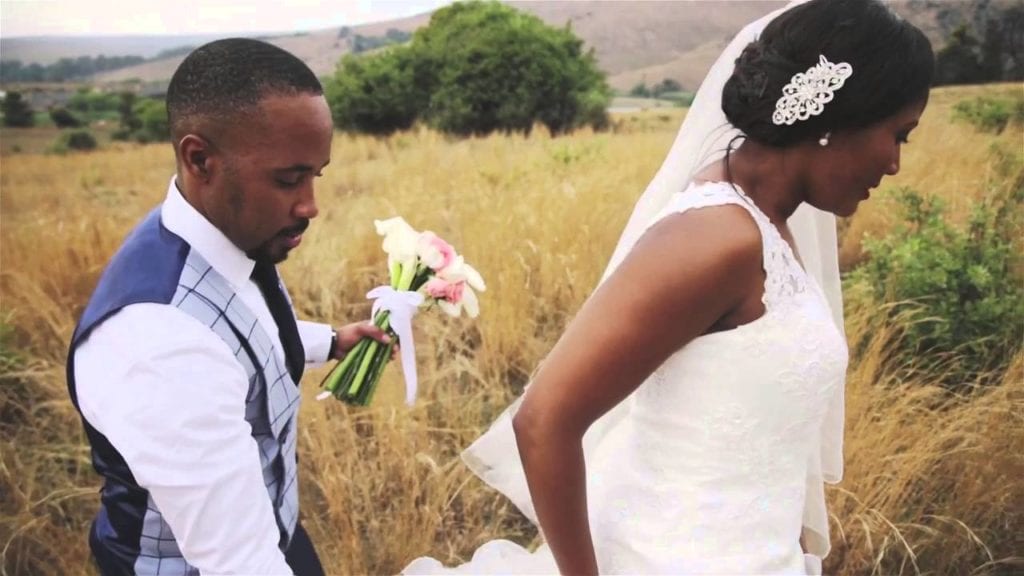 Symbolism plays a big part in wedding celebrations worldwide and Africa is no exception. Some couples who live there include the 12 symbols of life in wedding ceremonies to remind them of what their expectations should be once married and how to overcome those inevitable arguments.

Wheat represents fertility while wine symbolizes the uniting of two families. Pepper is included to represent arguments and salt for healing and preservation. Additionally, water indicates purity and the dissolving of bad feelings, bitter herbs symbolize the ‘growing pains’ of a new marriage and a pot and spoon symbolizes good food to sustain a healthy family. A shield is added to the mix to represent the pride of the home as well as a spear for protection. The last three symbols are honey that should remind the couple of the sweetness of their love for one another, a broom to ensure a clean home and a holy book to represent the truth and power of God.[7]

Valentine’s Day may stir up feelings of love worldwide, but some countries don’t share the sentiment. In fact, in Saudi Arabia, PDAs are strictly forbidden, and Valentine’s Day has been banned for fear of citizens becoming influenced and led astray by Western Christian customs. They take this rule so seriously, that the government imposed a 39-year prison sentence on 5 men in 2012 who dared to be out in public drinking and dancing with women. This is not to mention the 4,500 lashes they received between them.

Pakistan joined the party in 2017 and banned the day of love after the High Court ruled that Valentine’s Celebrations were not in keeping with Muslim tradition. Belgorod in Russia too clamped down on Valentine’s Day celebrations claiming that the ungodly atmosphere of the holiday does not encourage the formation of spiritual and moral values, especially in the youth.[8] 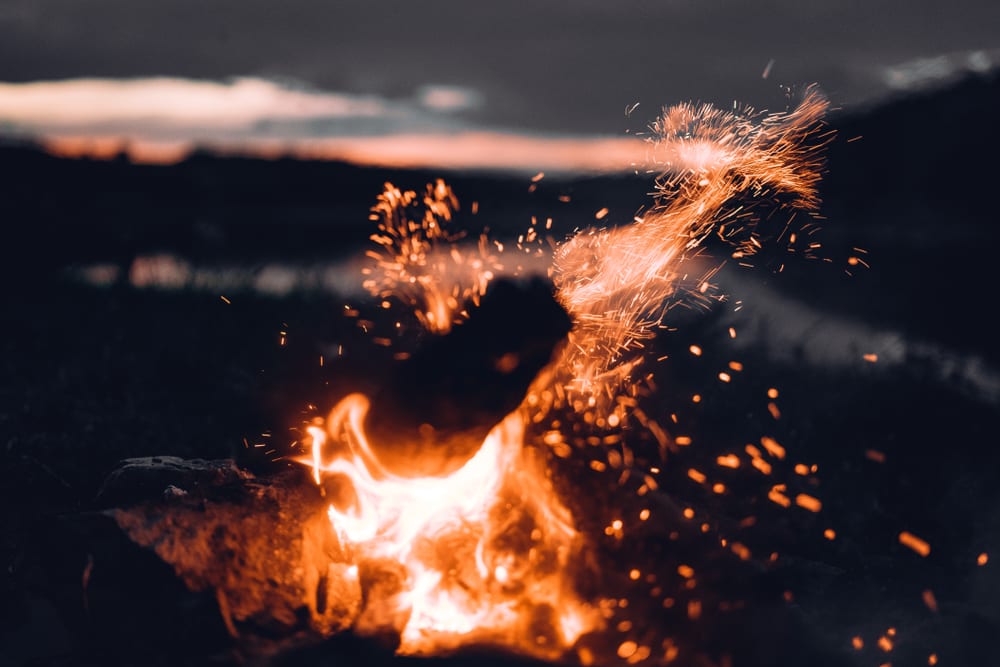 It is said that love is as random as lottery numbers. You get it when you least expect it and may just run out after a couple of years. In France, people tried to make the finding of true love more of a sure thing on Valentine’s Day. To this end they came up with the custom of single people lining up in houses facing each other. Once each person was settled, they’d call through the windows until everyone had found a partner.

Now of course in every game there must be winners and losers. The women who didn’t find their partners in the above-mentioned way were given license to start a huge bonfire in which they burned photos of all the single men who rejected them while yelling insults at them. As you might imagine, the bonfires soon got out of hand, and the French government stepped in to ban the custom.[9]

1 The luck of the Irish 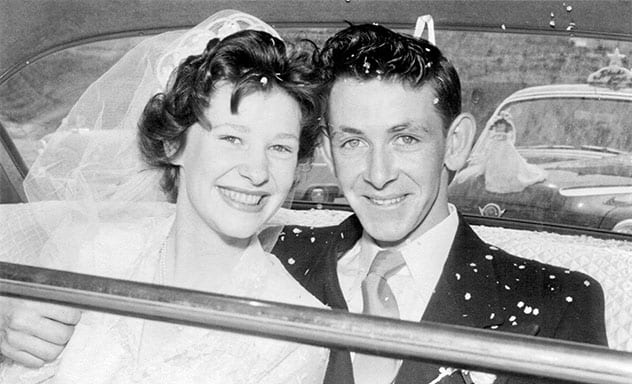 In Ireland exists quite a few wedding customs that are initiated before, during and after the ceremony as part of the celebrations. These include putting a sixpence in one of the bride’s shoes and incorporating a horseshoe in the bouquet. Some Irish couples toast to their honeymoon with honey wine while others include a traditional fruit cake as their wedding cake.

For more lists like this, check out 10 Bizarre Facts About Lupercalia, The Original St Valentine’s Day, and 10 Interesting Facts And Legends About St. Valentine.