You know the happiest place on earth, but what about the creepiest place on earth? Even though Disney parks are known for bringing magic and good cheer to everyone that enters, they have their fair share of unsettling, creepy, and downright scary features. From ventriloquist dummies to human remains on rides (that’s right, plural) these are some creepy things you’ll only find in Disney parks. 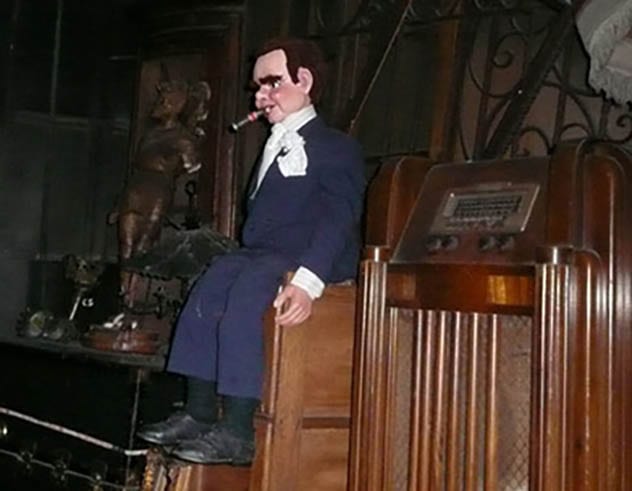 This prop you’ll find in the queue of Tower of Terror in Disney World’s Hollywood Studios may be even scarier than the ride itself. Caesar comes from an episode of The Twilight Zone titled “Caesar and Me” where he manipulates his owner into making questionable decisions. While Caesar isn’t a part of the ride itself, you’ll find him waiting for you at the exit of the ride. Cast Members at The Tower of Terror claim they must say hello and good night to Caesar every day or he will cause mischief around the attraction. Tower of Terror has plenty of nods to the original Twilight Zone series, but Caesar is by far the creepiest.[1] 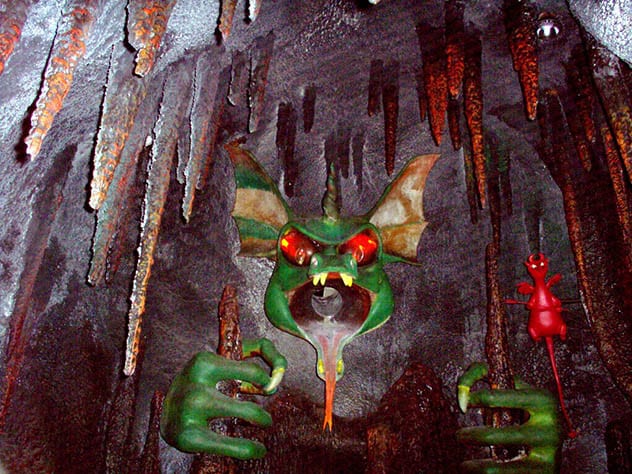 Mr. Toad’s Wild Ride in Disneyland is…a lot. It’s dark, loud, dizzying, and intense, and to top off the bizarre storyline, Mr. Toad (and you as the rider) end up in Hell. Yes, Disney Imagineers actually put Hell in a children’s ride. The temperature heats up to set the scene and riders are greeted with a demon, devils, and a giant dragon that breathes fire. It’s a bizarre moment and feels pretty unsettling compared to the rest of the park. Given the ride’s consistently long lines and nauseating effects, it’s probably only worth a single experience.[2] 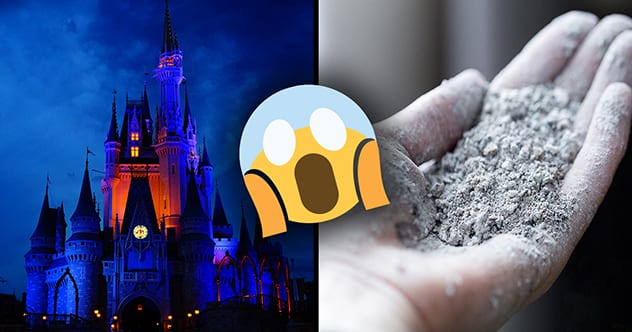 Disney parks attract people celebrating many occasions including weddings, birthdays, and…funerals? Apparently so. Disney has been forced to officially ban the spreading of ashes in their parks because it happens so often (FYI, you’ll be kicked out of the park if you’re caught). Guests have scattered ashes on rides from Pirates of the Caribbean to It’s a Small World, but the Haunted Mansion seems to be a fan favorite. “The Haunted Mansion probably has so much human ashes in it that it’s not even funny,” one Disneyland custodian told the Wall Street Journal. While the idea of spreading your loved one’s ashes in a place that meant a lot to them is sweet, maybe don’t do it at such a public place. It actually has its own violation code (HEPA cleanup) and requires a special vacuum to be used.[3] 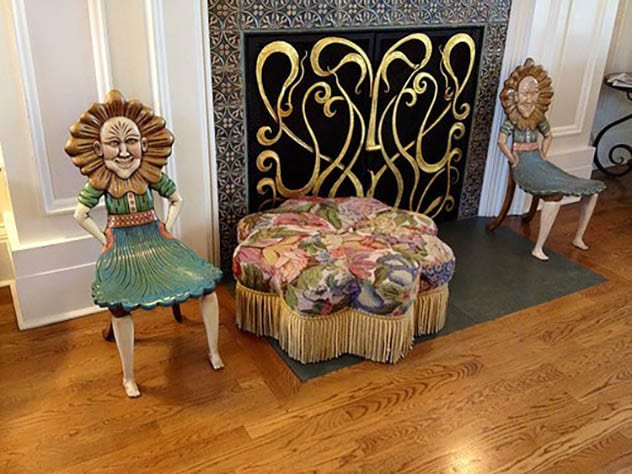 Disney World’s Boardwalk Inn is a Deluxe Resort themed for places like turn-of-the-century Atlantic City and Coney Island. In the late 1800s when boardwalk attractions like carousels were becoming popular, the chariot-style benches for parents to sit on while their children rode the wooden horses didn’t exist. Instead, parents sat on Nanny Chairs. These chairs weren’t required to be creepy, but the replicas at the Boardwalk Inn decided their Nanny Chairs needed arms, legs, and faces. You really need to see them in person to get the full “why would anyone do that” effect. They’re almost a weird as the giant clown statue in the pool area that holds an uncanny resemblance to Pennywise. Can we all agree that most stuff from the 1800s was weird and doesn’t have a place in modern society?[4]

6 Real Skeletons in Pirates of the Caribbean 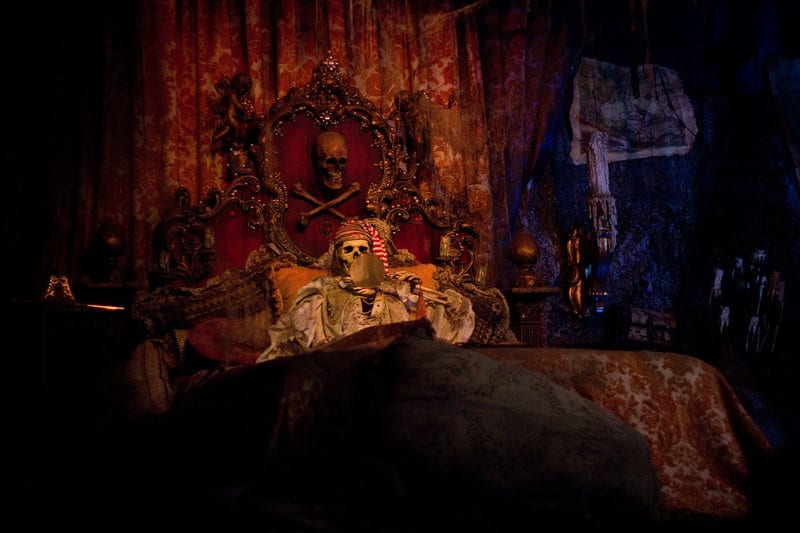 When Disneyland’s Pirates of the Caribbean ride first opened in 1967, the Imagineers decided it needed a more realistic feel. Apparently the fake skeletons at the time seemed too fake and unrealistic. Their solution? Procure real skeletal remains from the UCLA Medical Center and add them to the set. While this certainly gave the chilling effect Disney was looking for, the technology to create realistic skeletons eventually improved and the real bones were sent back to their countries of origin to have a proper burial. However, there are plenty of rumors out there that insist some real human remains still sit inside the ride. Try to imagine that the next time you’re floating down the bayou and it will add an entirely new feel to the attraction.[5]

5 The Stretching Room in the Haunted Mansion

The Haunted Mansion ride (found at Disneyland and Disney World) understandably gets several spots on this list. While the ride itself has its fair share of creepy moments, the pre-show in the Stretching Room is undoubtedly the most frightening. Guests cram into an octagonal room where they are welcomed by a Ghost Host and greeted with four paintings that hang above on the walls. Each painting seems relatively normal (a bearded gentleman holding a piece of paper, a young woman holding a parasol, an old woman holding a rose, and a man in a bowler hat) until the room seemingly stretches upward and reveals grisly hidden context to the rest of the paintings. The bearded gentleman is revealed to be standing on a lit pile of dynamite, the young woman is balanced on a tightrope above a snapping alligator, the old woman is sitting on the tombstone of a man killed with an ax, and the man in the bowler hat is on the shoulders of two other men sinking into a pit of quicksand. To top it off, the Ghost Host laughs and tells the crowd they can always escape the mansion “his way” before a loud clap of thunder is heard and a man hanging from a noose is revealed in the rafters above. A portrait of that man is seen later in the ride where he is shown holding an ax with the noose still around his neck, implying that he cut himself down after he died. Pretty creepy stuff for a children’s ride.[6]

Anything that’s been abandoned is a little creepy to begin with, but abandoned Disney parks have a particularly eerie quality to them since they contradict to starkly with the colorful, crowded, cheerful parks currently open. Disney actually has two abandoned parks to its name: Discovery Island and River Country. Discovery Island, which sits in Bay Lake on Disney World property, was initially opened in 1974 under the name Treasure Island as a premier tourist destination/bird sanctuary only reachable by boat. It was renamed Discovery Island in 1978 and served its purpose until 1999 when it was closed for various reasons, including bacteria found in the water and roaming alligators. The animals in the sanctuary were moved to Animal Kingdom Park and the island has been banned to tourists ever since. River Country, opened in 1976, was Disney World’s first water park and was instantly a popular tourist attraction. Unfortunately, the park had its part in several deadly incidents that ultimately led to its closure. In 1980 a young boy died from an amoeba he contracted after visiting River Country, but there was no enough evidence to prove Disney was at fault as he could have contracted it somewhere else. Two years later a child drowned coming off a waterslide, and seven years after that another boy drowned in the park. The park continued to operate until 2001 when it closed for maintenance and never reopened. Disney official announced the park’s closure in 2005, and it continues to be waterlogged and moss-covered to this day.[7] 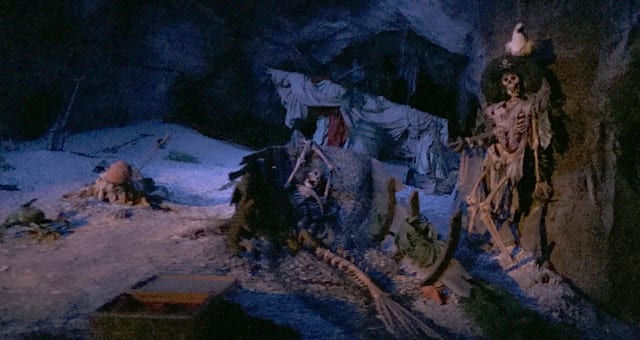 Another one for Pirates of the Caribbean, but this time we’re focusing on the ride in Disney World. According to popular Disney legend, while being built in the 1970s, a welder named George who was working on the ride died in a tragic accident. His cause of death is a legend in itself since no one seems to know exactly how it happened, but those who believe it happened say George’s ghost haunts the ride to this day. Throughout the years Cast Members working on the ride claim to seen everything from ghostly apparitions on security footage to props being moved with no explanation. According to tradition, Cast Members must say “good morning” and “good night” to George every day to ensure things will run smoothly and George won’t wreak too much havoc. Luckily he isn’t a malicious ghost and most of his spooky actions are pretty harmless, albeit creepy.[8]

Remember the one scene in Snow White where she runs through the woods and feels like monsters are closing in on her? Picture the feelings you had during that scene made into a ride, and you get Snow White’s Scary Adventures. This Disneyland attraction is legitimately one of the creepiest few minutes you’ll spend in the park, without the happy ending Disney is known for. The ride starts out relatively pleasant but quickly becomes dark and cold with an ominous soundtrack playing in the background. You’ll also see the queen turn into the old hag right in front of your face, which is a guaranteed “jump out of your seat” moment. Top it off with some dungeon skeletons and simulated lightning before the ride comes to an abrupt end. Luckily, it’s currently closed for refurbishment to give it a more upbeat feel.[9] 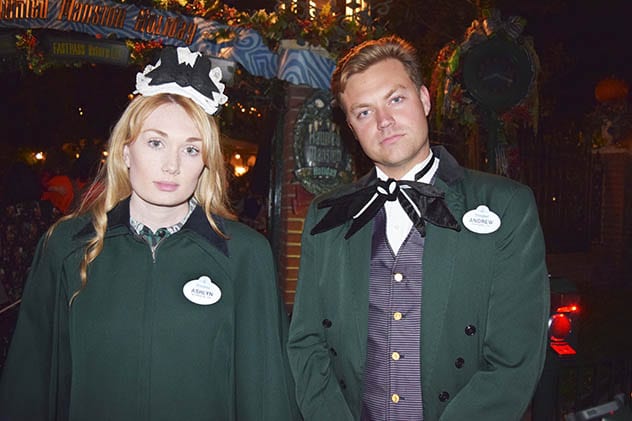 The Haunted Mansion is easily the creepiest attraction in the Disney parks, which is why it gets three spots on this list. The last honor goes out to the Cast Members’ amazing ability to get in character when they’re working this ride. While many Cast Members in the Disney parks are known for being over-the-top friendly and cheerful, Haunted Mansion’s staff give a more appropriate feel of somberness and gloom. If you ever feel eyes on you while waiting in line for the ride, you might turn around and see a Cast Member staring at the back of your head. Don’t worry—if you have a question or problem, they’ll be glad to help! Just don’t expect any jokes or smiles from their end.[10]