Disney just can’t catch a break in the news these days, constantly dealing with different PR disasters of their own making like the controversies surrounding their live action remake of Mulan, high profile actors speaking out against them for alleged racial biases, and even opening up their theme parks as a pandemic rips through the country. With their still relatively new streaming service finding its legs in the market, Disney appears to be trying to be extra careful to avoid controversy by offering censored and cut down versions of their films and shows. Here are ten such cases of Disney’s censorship on their new streaming platform Disney Plus.

10 Splash Is Hearing No Butts About It

Starting off with probably the most well known instance of censorship on the streaming platform so far is the 1984 film Splash starring Tom Hanks and his light hearted adventures with a mermaid. In the original version of the film, there is a very brief scene where the actress Daryl Hannah is seen running naked into the ocean, her butt visible to the camera. In 1984 times, this earned the film a PG rating likely due to the fact there was no PG-13 rating that could even be applied to it yet.[1]

In 2020 times, Disney wasn’t going to let a little cheek slide. Instead of leaving the movie as it was, Disney opted to use special effects to add about an extra foot of hair down the length of her back to cover her posterior. Not the biggest deal in the world, but it’s so poorly done, it looks like the actress has just a solid mass of dreadlocked hair covering her bottom like she pooped into it and never attempted to clean it.

9 An Entire Episode Of The Simpsons Removed

Most people can agree, anything after season 10 of the Simpsons never really happened. Season 30? Don’t be silly. While we can all look back on those first ten seasons of the Simpsons with nostalgic enjoyment, there’s one episode you just won’t find on Disney Plus, or just about any streaming platform for that matter. The episode in question is the season 3 premiere, Stark Raving Dad with a guest starring role from the king of pop himself, Michael Jackson.

Despite the controversies in Michael’s life while he was alive, the episode didn’t start getting any real heat until after an HBO documentary called Leaving Neverland about two men who claimed Michael sexually abused them as children released and set the internet ablaze with discussion. With the new allegations brought to light, the showrunners decided it would be best to remove the episode from availability online, stating they were against book burning, but felt because it was their product, they were allowed to remove things they didn’t like.[2]

It’s truly amazing how much can change in just a decade or two. Originally released in 1999, Toy Story 2 featured a blooper reel of sorts at the end of the film of joke scenes made by the animators. One such scene was the Stinky Pete toy taking two barbies aside and telling them he could get them a part in Toy Story 3 before noticing he was on camera and ushering the girls away in a panic. An obvious allusion to the casting couch of Hollywood where many young stars were taken advantage of sexually by executives.

While it’s likely the joke was removed because it isn’t exactly acceptable in today’s society to make sex exploitation jokes in a kid’s movie, there’s actually a double whammy at play. John Lasseter, the man behind Toy Story 2 and a vast majority of Disney’s animated films in the 2000’s ended up leaving the company after real life allegations of sexual harassment were levied against him. Wouldn’t want something like that looming over your streaming service in any shape or form.[3]

Surprisingly the bad lessons being taught to kids by Lilo and Stitch has absolutely nothing to do with bringing a wild rabid animal into your home and leaving it alone with your kids. The bad lesson in question is actually quite subtle if you’re not paying attention. In a scene where Lilo is being chased by her sister Nani after a bad meeting with child protective services, Lilo closes herself off in a washer to hide from her sister.

Of all the places she could have hidden the animators chose one that was actually a real danger to children watching who might get the same idea. To rectify this, the film was updated to have the washer become a cupboard, and the door she hid behind became a pizza box. It’s a weird visual choice, but clearly done to prevent any issues of claims that kids learned the idea from using their streaming service.[4]

6 Gravity Falls Gets A Hat Censored 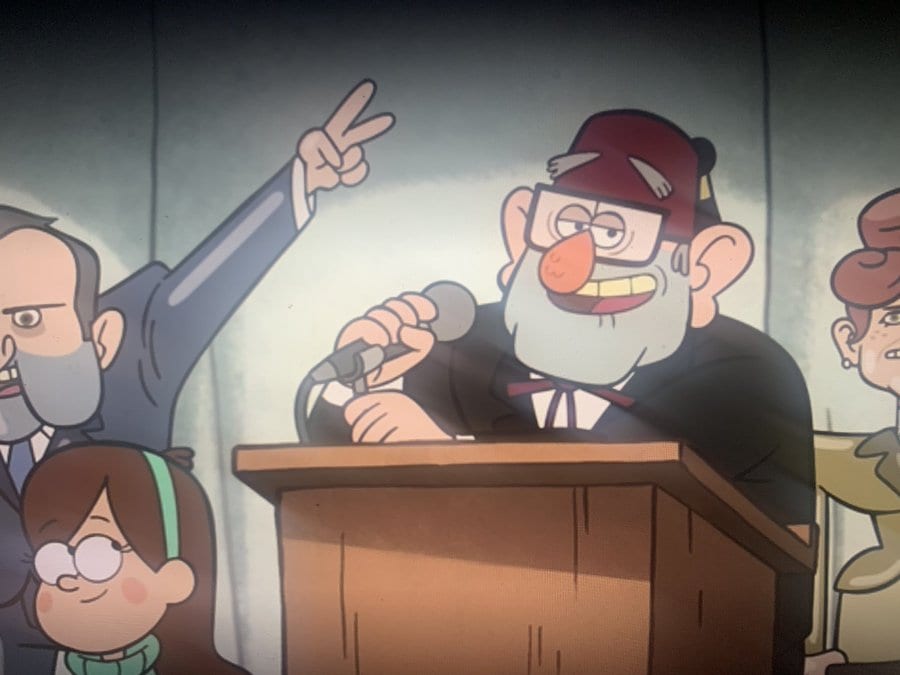 Not all forms of censorship will make sense to us and our American sensibilities. Take the Disney cartoon Gravity Falls for instance. A cartoon wildly popular for its use of hidden puzzles and secret symbolism scattered throughout its episodes, it seemed odd that when it came to Disney Plus, one of the most prominent symbols throughout the whole series was missing in the first season; the logo on one of the main character’s hats. To make matters weirder, the symbol was visible in the screenshots to each episode, but not in the episodes itself.

The creator of the series even chimed in on social media confused by the seemingly senseless change to the show, but there may be an explanation as to why it was edited out at least. While it hasn’t been officially explained as of writing, the show had the symbols removed in some foreign countries because of its similarities to the Nation of Islam flag, and somehow this censored foreign version found itself in the American release.[5]

We may look back fondly on the cartoons of the old days when we view them with rose tinted glasses of nostalgia, but a fair few of them would not hold up to the standards of today when it comes to bigotry. Usually for these older cartoons a warning will display before it plays to let viewers know that the cartoon is from a bygone era and the company didn’t stand by what was shown, but felt it important to keep it as it first appeared.[6]

Despite showing the warning, The Santa’s Workshop cartoon from the 1930’s didn’t exactly follow it. What they did instead was cut out a scene of a stereotypical doll of a black character with large lips and exaggerated mannerisms. Most people probably wouldn’t miss this scene from the movie, but the thing that makes it notable is that shortly after the scene plays out a group of equally controversial caricatures of Asian dolls come in bowing over and over again to vaguely ethnic music.

Okay okay, most of us know that the infamous Easter egg in the Lion King movie didn’t actually spell out the word sex in the stars like most internet forums would have you believe in the 90’s. It actually spelled out SFX as a nod to the special effects team behind the movie. It was just our dirty minds and low quality VHS copies of the movie playing tricks on us and making us see different.

While we all know the truth now in the age of high definition and super giant TV’s, Disney wasn’t going to take any risks of the rumor persisting, instead opting to remove the letters entirely from the version of the film on their streaming service.[7]

In a similar vein as the Lilo and Stitch censorship, this has less to do with children possibly hurting themselves and more to do with hurting others. In the original version of the 2D animated movie the Emperor’s New Groove, one of the main characters gets upset at another character and whips a fairly large rock at them, hitting them in the back of the head. The scene is light hearted and it isn’t done in malice, but a lot of bad can come from kids throwing rocks.

In the Disney Plus version of the film, the rock has been replaced with an acorn. A certainly less lethal alternative than a stone to the back of the head, but as one reddit user pointed out, they allegedly didn’t replace the audio in the scene so it still sounds like someone getting clonked with a rock. Just don’t throw things, kids.[8]

2 Goofy Is Too Sexy For Disney

Oh how we wish this was a joke title, but it isn’t. The 1995 Goofy Movie available on Disney Plus has been edited to reduce the sexuality of certain scenes. The two most obvious examples being when Goofy’s son Max hugs Roxanne, his love interest in the film, his face presses into her chest. For the Disney Plus version, his face is safely leaning away from her body. The second more obvious edit is when Goofy walks into a room and accidentally sees an obese woman in her underwear getting dressed.

For the Disney Plus version of the film, the woman has been digitally given long underwear to cover her body. This is a real loss for all of those Goofy fetishists on the internet, which is a real thing you are now forced to know exists.[9]

Imagine how lawless children’s television was in the 2000’s that we’re only just now realizing a hit Disney show might have hit the air with one of its main characters using multiple slurs against another of the show’s characters. We say “might have” because there’s no official word on what is being said in the show, but going by clips posted online, it’s pretty hard to deny.

During a scene where multiple characters are yelling and arguing with each other, it sounds like the main character either calls her friend a “rude nigga” or a “fruity nigga” twice before the argument stops. While it is unknown if that’s what was actually officially said, the scene was edited in the Disney Plus version to show the characters from behind and the audio replaced with just indistinct yelling.