Bans are a necessary part of life. We may not like them, but when something is banned, we usually understand why. For instance, we all generally agree that it makes sense to ban drinking while driving—it makes us safer and requires very little sacrifice.

There are some people, however, who are so bothered by certain bans that they use their creative craziness to flip a figurative middle finger at it.

Creative rebels—where others see a stop sign, they see a green light to get crafty. 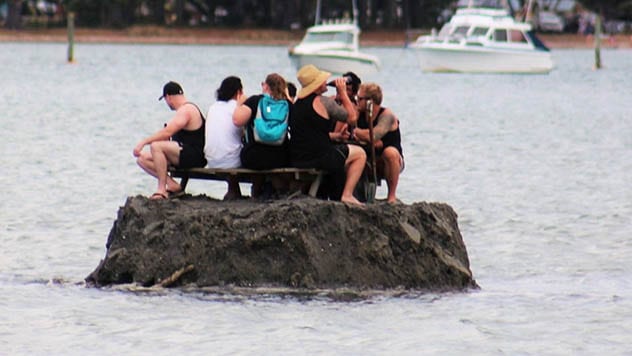 Coromandel is part of the Thames-Coromandel district located on New Zealand’s North Island. It is known for its beaches, forests and chill vibe. 30,000 people call Coromandel their home.

Back in the final days of 2017, that chill vibe took a hit when public drinking was banned over the New Year period. Those defying the ban faced a fine of $180 US or arrest.

So, what is a group of friends, intent on boozing it up on New Year’s Eve, to do? Build an island. Of course! Wait, what?

The group of seriously determined drinkers got to work in low tide in the Tairua estuary—packing sand high enough to form a sort of island once high tide came in. Then they installed a picnic table and an ice box. Sure enough, when the tide came in, they made their way to their island and counted down the hours to 2018 with plenty of wobbly pops to keep them company.

They were allowed to do this, they claimed, because they were in international waters.

Naturally, when the police found out about all this nonsense it was handcuffs and jail for the whole gang of ban breakers.

“That’s creative thinking—if i had known [about it] I probably would have joined them.”

That’s right, New Zealand cops have a sense of humor. Not only that, but Sandra Goudie, Mayor of Thames-Coromandel, has one, too. She used the sandy stunt as an example of, “…the inventive nature of the people [of Thames-Coromandel].”[1]

6 Music Website Uses Lego To Get Around Photo Ban 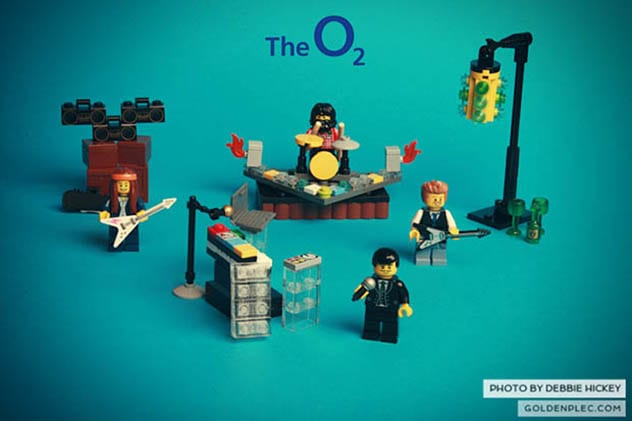 Some big bands ban local music photographers from taking photos of them when they come to play in their city. They do this by not issuing a photo pass.

On one such occasion, music site GoldenPlec wanted to send a photographer to a concert being put on by The Killers. The Killers, nixed that request—which, in their defense is consistent with their chosen band name.

Instead of throwing a pity party for themselves, GoldenPlec took those lemons and made some lemonade. They got creative and made LEGO representations of the guys in The Killers and photographed them. Surprisingly, their review of the show was largely positive.

Photographer Debbie Hickey built the LEGO likenesses of the band and shot the pics. She writes,

“The reason for this was because the band have a strict no photographers rule…As they were one of my favourite bands I hoped to shoot, I was left a felling a little deflated. Their o2 gig in Dublin this weekend was no different. Photographers be gone! No Photopass? No problem! If I can’t shoot them, I’ll build them, Never let it be said that GoldenPlec doesn’t get the shot.”

Though she had a little trouble finding all the famed plastic blocks she needed to get the job done right, it took her just 30 minutes to build and take the pics.[2] 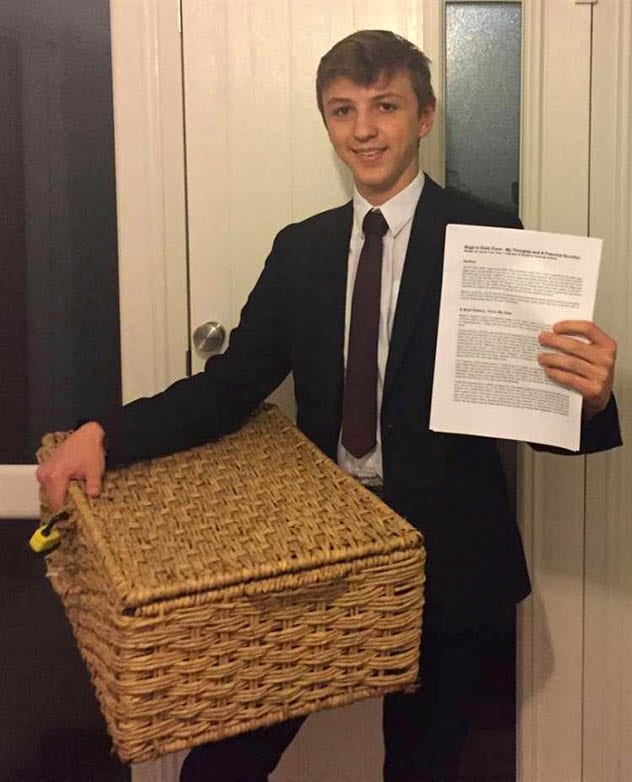 Back in 2018, the Spalding Grammar School in Lincolnshire, U.K. decided to ban backpacks from their hallways. They did this after a staff member and two students were hit and injured by big backpacks.

Angered by the ban, student Hannah Catterall managed to get 463 signatures on a petition calling for its removal. The School reacted by taking the petition down.

That’s when fellow student Jacob Ford joined in on the seditious fun by penning a 3,300 word letter about how the backpack ban was silly. The school ignored Ford’s letter. So, predictably, Ford decided to turn things up a notch.

The school was not impressed. Head teacher and Head microwave oven book bag hater, Steven Wilkinson, shot back in the press, saying, “We have a student who has behaved in an increasingly inappropriate way, actions the likes of which I have never witnessed, and who has been sanctioned entirely in line with the school’s policies.”

Ford’s mum, however, was in his corner all the way, “I’m proud of the fact that he felt strongly enough about it to stand up and do something about it.” She went on to say, “We all have a right to be listened to. So hats off to him.”

Thinking that her rebel rousing son no longer had a fair shot at Spalding, mum Tracy Ford transferred him to another school.[3] 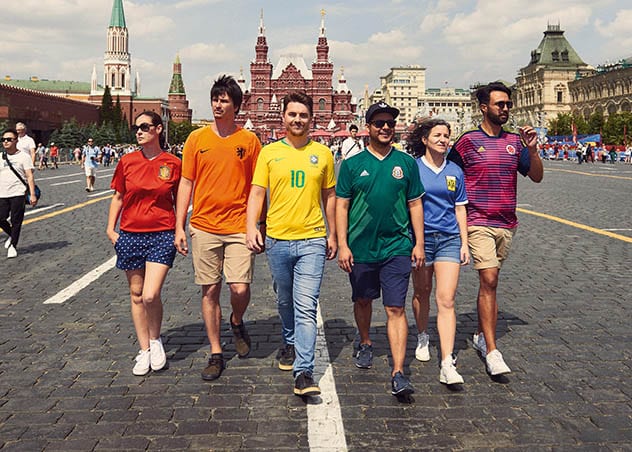 In 2013, Russian President—and guy who sucks at hockey though everybody pretends he doesn’t—Vladimir Putin signed a ‘gay propaganda’ law.

The piece of legislation prohibits “promotion of nontraditional sexual relations to minors.” The results have been predictably ugly with increased violence directed towards gay people as well as the shutting down of websites and support groups aimed at the vulnerable community. It also bans the rainbow flag.

But banning a flag made up of different colors was no match for a group of daring and creative Latin activists. In the run up to the 2018 World Cup, which Russia was hosting, these plucky nose thumbers for freedom walked around Russia with their own mobile makeshift rainbow flag and nobody even noticed—not even the Russian police.

That’s because each one of them decided to wear a different national soccer jersey—each one representing a different colour of the famed and banned rainbow flag. The national jerseys they wore were from Spain (red), The Netherlands (orange), Brazil (yellow), Mexico (green), Argentina (blue) and Colombia (purple).

The woman who wore the Argentina jersey, Vanesa Paola Ferrario, summed it up nicely, saying, “For me, Russia is a symbol of homophobia, with a government that allows discriminators to be protected by the law, and somewhere where people aren’t free to love.”

The clever and colorful display of defiance went viral with ‘#HiddenFlag’.

The protest was the brainchild of a digital agency called LOLA Mullenlowe and Spain’s largest gay organisation FELGTB.

LOLA’s Executive Creative Director Pancho Cassis was delighted by the campaign’s reach, saying, “Being visible is always a risk, but doing it with thousands of fans and fans of the World Cup and the press in front, is what motivated us to carry out the original protest. The #HiddenFlag gives visibility to all the people who live in Russia and face discrimination and fear on a daily basis.”[4] 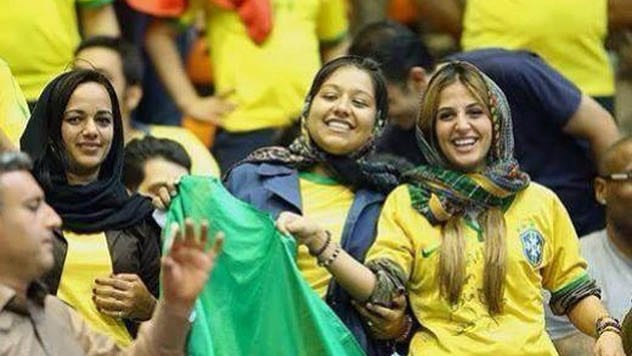 Back in October of 2019, after 40 years in effect, Iran finally lifted its ban on women attending sporting events.

But, back in 2014, with the ban still in effect, female volleyball fans had to get creative if they wanted a seat in a local stadium to cheer on their national team.

Outside stadiums, “morality police” would watch for women and prevent them from entering. But, the ban did not extend to women cheering for an out of country team.

So, when Brazil came to town to play Iran, at the Azadi stadium in Tehran, a clever and courageous group of Iranian women dressed in Brazillian national team jerseys. Receiving a little help from Brazillian supporters, they managed to walk right past the “morality police” and into the stadium.

In all, about a dozen women were able to sneak into the game and cheer on their boys.

With the ban now lifted, Iranian women can actually wear Iranian national team jerseys while cheering on their country’s team. Imagine that.[5] 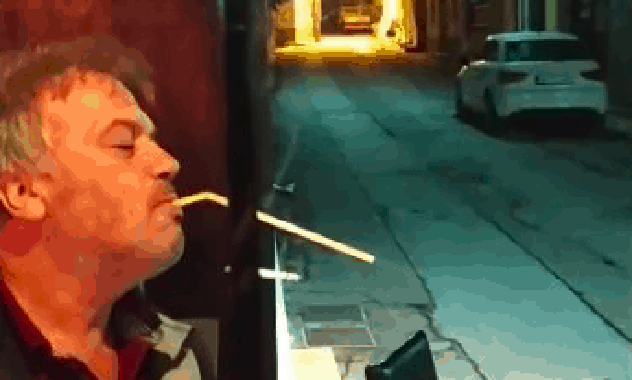 Ten years after passing an anti-smoking law, the government of Greece decided it was time to actually enforce it.

One dedicated smoker, however, found a gap in the ban—literally.

Placing his cigarette in a gap in a cafe’s front glass, so the end of the cigarette was burning outside the cafe, the man inhaled. Then he exhaled through a plastic straw he had placed just above his cigarette in the very same gap. Technically and hilariously, he was not smoking indoors.

Getting around a ban and having some fun while doing it—some people are born heroes.[6]

Fan Banned From Stadium, Hires Crane To Watch The Game

Football (or soccer as Americans know it) is a big deal in Turkey. Though nothing compared to bigger football nations like Germany or Italy, in 2017-2018, Turkey’s football league boasted revenues of 731 million Euros ($791 million US).

And a fan nicknamed “Yamuk Ali,” might just be Turkey’s most football mad citizen.

Sometime back in 2018, Yamuk Ali was slapped with a year long ban from attending matches at the Denizli Ataturk Stadium in Denizli, Turkey.

But, superfan Ali was not about to let some silly year long ban keep him from cheering on his favourite team—Denizlispor. As the saying goes, “When life hands you lemons, you rent a crane.”

That’s right, Ali rented a crane and was able to get it high enough so he could peer over the wall of the stadium and watch his team play rival Gaziantepspor. Good thing, because his team thrashed them 5-0. In baseball terms, that’s like beating a team 20-0.[7]

About The Author: Domenico De Luca has been writing for thirty years—screenplays, short stories and songs making up the vast majority of his output. He is a film buff with his very own blog called so many films, so little time. He is also a music addict and devoted lifelong fan of the Toronto Maple Leafs.