From San Diego to Singapore, we all want to get to work as quickly and conveniently as possible. For many of us, our commute constitutes of spending an hour underground with next to no personal space or stuck in traffic for what can seem like an eternity.

This, unsurprisingly, is not for everyone. Whether it’s for speed, comfort or just to be a bit more individual, the following list explores how a number of people have left the ordinary behind for their own crazy commutes. 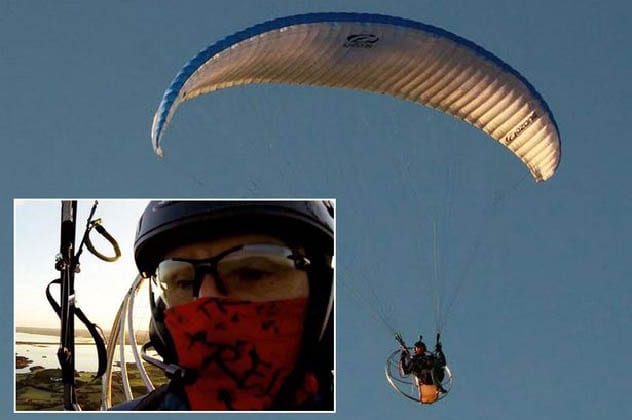 Most workdays, Paul Cox enters his office with a four-stroke motor in a suitcase. Paul isn’t a mechanic or a budding engineer, he simply paramotors into work when the weather allows. His 10 mile journey in Anglesey, Wales allows Paul to literally fly over the traffic as he travels to Holyhead Boatyard where he works for the Royal Navy.

His £8,000 motor can be a hassle to get ready each morning, but Paul says that it is totally worth it for the views of the coastline. Paramotoring to work does come with its risks. In 2019, Tom Prince who had learnt to paramotor specifically to commute to his job, died when he crashed into an electrical power line.[1] 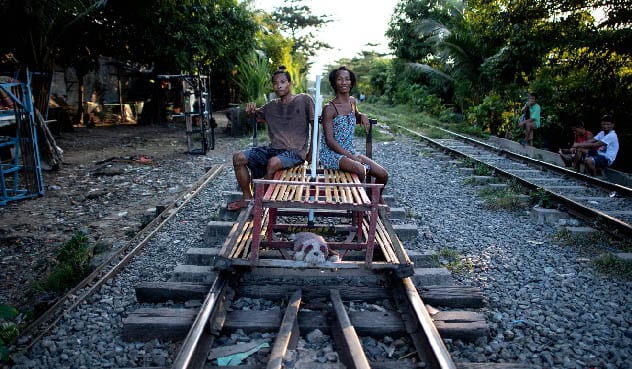 A quick online image search for the Philippines will see hundreds of beautiful tropical islands and lush forests. Away from the tourism propaganda for the western world, The Philippines has over 4.5 million homeless residents with 21.6% of the population living below the national poverty line.

Many of the homeless population in Manila provide a popular, yet dangerous transport service for those in the city. Manila’s ‘trolley boys’ push adapted rail carts, often wooden benches with train wheels attached, along the maze of Manila’s existing train lines. For some, the carts turn into their beds after what is commonly a 16 hour working day.

At 2 cents per kilometre, it is a far cheaper option than traditional buses and trains. It is also more direct and comes with no traffic. These saving do however come with a risk. The train lines are still active. Deaths are not uncommon and near misses regular. The trolley boys rely on their knowledge of the train schedules to ensure a safe trip for both themselves and the commuters. All the trolley boys, and most of the commuters have a narrow escape story to talk about.[2] 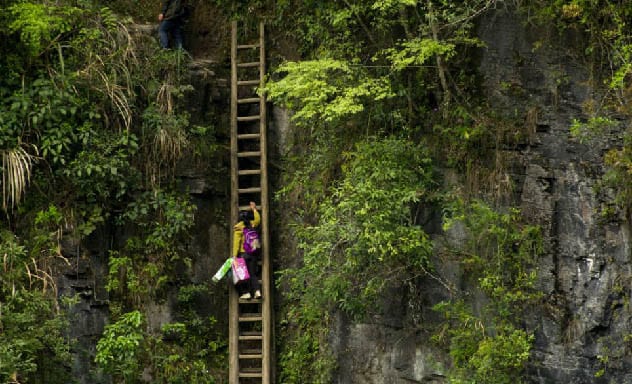 As kids, many of us got to school via a short walk, a bus ride or in the back of our parent’s car. For the children from the village of Zhang Jiawan in southern China, the school commute is more akin to an extreme sport. An intricate network of unsteady wooden ladders helps the students, some as young as 5, climb the Badagong mountains on which sits their school. Whoever decided to build a school on top of a mountain was either in a pretty bad mood or wasn’t much of a forward thinker.

The ladders are not secured and instead rest against the rock. With no safety measures in place, school children are merely advised to not look down during their ascent. Although much has been done to get the government to create a more accessible route, at an estimated cost of $10million, the 100 residents of Zhang Jiawan will be waiting a while longer.

There is another option if the ladders don’t take your fancy. A 4 hour cross-country detour is available.[3] 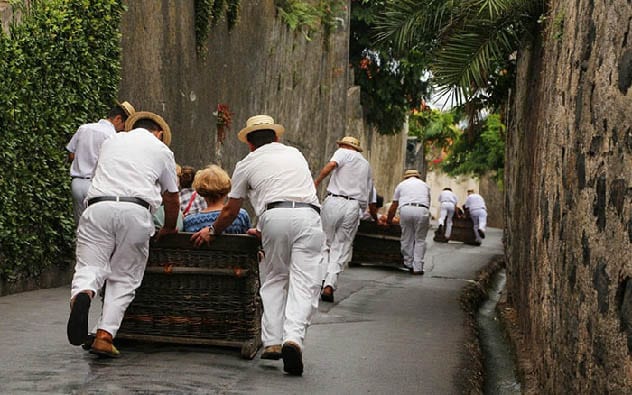 In the 19th century, wicker sledges resembling toboggans were used to transport locals down the hills of Monte to the city centre of Madeira. Pushed by two ‘carreiros’, who still wear the traditional white cotton clothes and straw hats, it was the chosen mode of transport for businessmen in the area.

Nowadays, these toboggan sledges are predominantly used by tourists, with thousands sliding their way down the roads each year. The popular route to Livramento is 2km and takes around 10 minutes, with speeds reaching 48km/h. Trips cost around €30 and you can still occasionally see local businessmen commuting through this traditional mode of transport.[4] 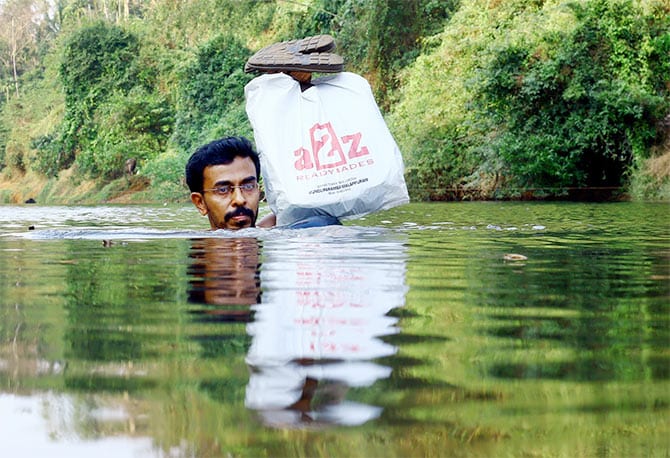 If someone asked you to swim in a river with water snakes in it to get to work, you’d probably tell them to get lost. Well for one teacher in Kerala, India, a 1.5km swim is the preferred route to school than a 24km road journey. Since 1994, Abdul Malik, donning an inflatable tube around his waist and a plastic bag with the day’s supplies has made his way to the Muslim Lower Primary School by swimming across the river. Once out of the water, he changes into his dry clothes and continues with a short walk to work.

Even through monsoon seasons, Malik swam to work. His choice of commute is down to time saving. Malik explains that a standard commute would involve traffic, bus changes and a longer distance. He also takes his students swimming and together fill bags with plastic and rubbish they find floating in the river.

However, for the past two years, Malik has had to take the longer route to school as he now has greater responsibilities since the headmaster retired.[5] 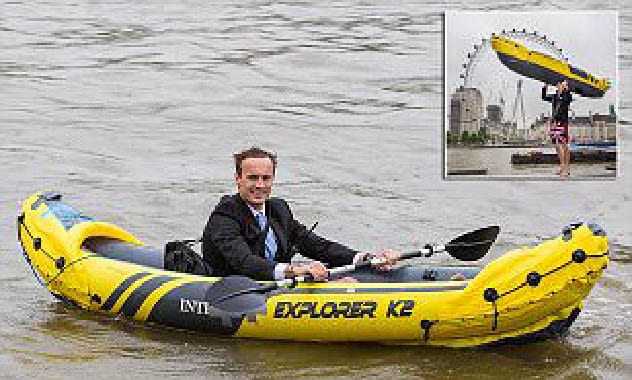 Anyone who has been on the London Underground during rush hour will have experienced the definitions of confined and uncomfortable at first hand. Opened in January 1863, the Tube network is used by roughly 2 million people on a daily basis. With the population of London rising year on year since 1988, the Tube is more cramped than every before. Although significant improvements have been made throughout the years, the capacity of the system is restrained by the original size of the underground tunnels.

One man who decided to give the Tube the boot was George Bullard. As someone who kayaked across the North Atlantic, George is no stranger to being a bit different. Growing disillusioned after his time at sea, George decided to swap his hour-long commute on the tube for a more peaceful 90 minute kayak along the River Thames. It does (unexpectedly) come with its challenges. Tides, the elements and countless larger vessels means that there is no chance of catching up on some missed sleep before work.

Regarding the London weather, George states that it is all “part of the parcel”.[6] 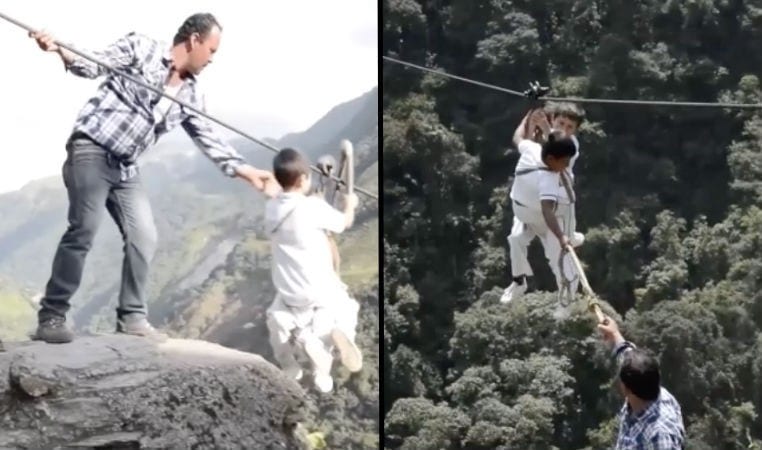 When I say zip wires, often the thoughts of James Bond or some other action hero springs to mind. For the families of Acacías, 40 miles south east of Bogota, Colombia, a 1,300 foot steel zip wire is the quickest option to connect to the opposite mountainside where the nearest town is. Children travel to school this way, speeding at up to 64km/h, 365m/1,200 feet above the Rio Negro river, controlling their speed by pressing a wooden fork against the cables. Those too young to travel themselves are carried in a jute bag for the trip.

This is not a modern system either. In 1804, German explorer Alexander von Humboldt first witnessed ropes, then made from hemp being used by the locals as a method of transport. In recent years, a hiking trail has been established which takes 2 hours. However, the zip wires remain the popular option as it is far quicker and easier. The zip wires aren’t just used for transportation. Locals use the cables to transport goods between the two sides of the valley.[7] 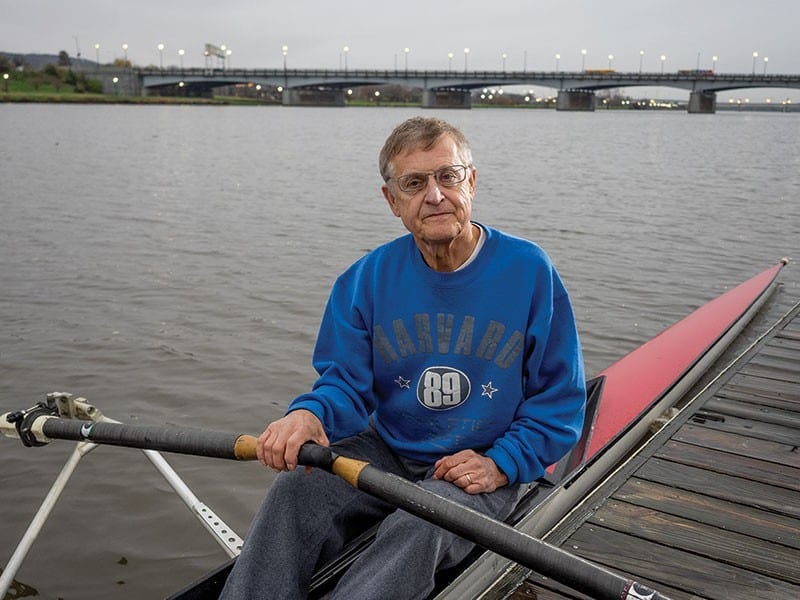 From 1997 to 2016, 74 year old Gabriel Horchler rowed to work every morning as the Head of the Law Cataloguing section of the Library of Congress. It was an idea that came to him whilst on his motorbike and stuck in heavy traffic and found himself looking at the Anacostia River. A journey sandwiched between two 15 minute cycling trips, it takes Gabriel a total of 90 minutes from door to door.

His decision to take to the bikes and rowing boat is down to the quietness, staying healthy and the wildlife he enjoys seeing on his journey. But mainly to avoid the traffic jams and other commuters. As with other entries in this list, the unusual choice of transport isn’t without its challenges. Unexpected rainstorms and changes of wind direction has resulted in Horchler capsizing three times.

In 2016, Gabriel retired from his role at the library, however he can still be seen still rowing up and down the Anacostia from time to time.[8] 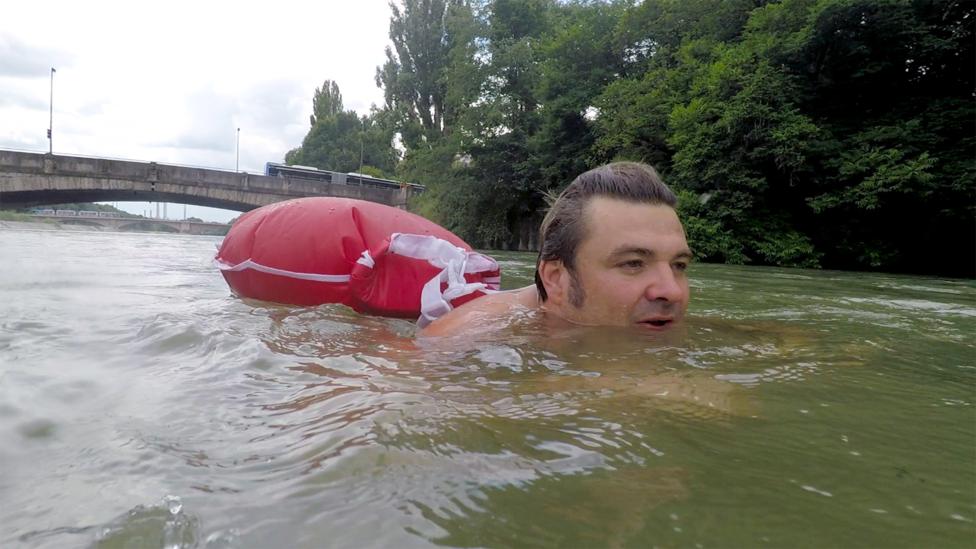 Another person who has taken up swimming as their daily commute is 42 year old Benjamin David. Fed up other commuters on Munich’s busy street, Mr David packs his belongings, including his laptop, suit and shoes, into a waterproof bag, pulls on a wetsuit and jumps into the river Isar. David works at a riverside bar, so his unusual commute takes him Directly to work.

Mr David credits the river’s current to the ease of his trip to work. The almost 2km journey takes just 12 minutes and involves more floating than swimming, helped by the inflatable waterproof bag he carries with him. David claims his journey is more relaxed and quicker than the drier option. He does however, wear rubber sandals to protect his feet from anything nasty on the riverbed.[9] 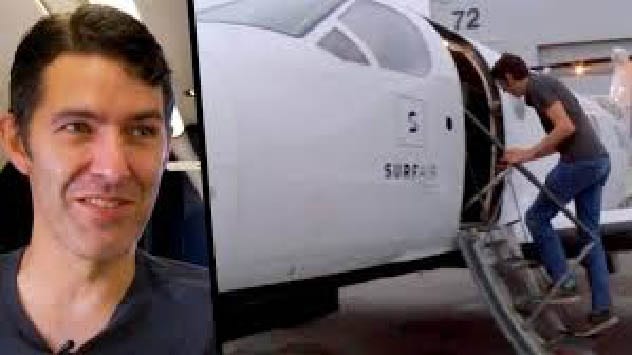 By completing a background check, von Badinski is able to bypass the usual security measure in place for the ordinary commoner. So how much does it set him back? Well each month, von Badinski pays $2,300 to Surf Air, allowing him to take as many flights on a single-engine turboprop plane as he likes.

Regarding the sizable carbon footprint attached to his method of transport, von Badinski uses a hybrid vehicle for the drive from Oakland airport to San Francisco to allay his guilt for the horrific climate sin he is committing! Von Badinski also reminds himself to check the weather in San Fransisco every day and dress appropriately before setting off as it can be very different from the climate outside his home in Los Angeles.

I wonder if he has ever considered moving closer.[10] 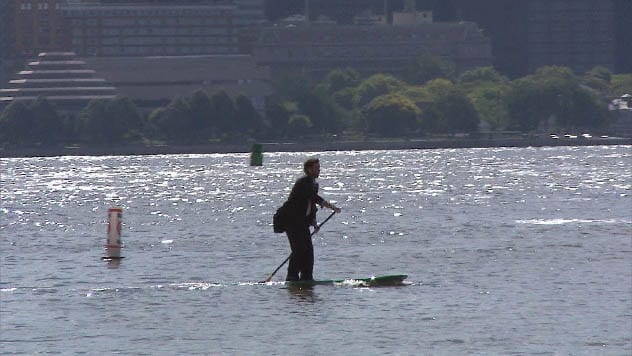 A bonus place goes to Scott Holt for paddle boarding across the Hudson river in a suit to get to his meeting. When Holt realised his train was delayed due to signal problems, and the ferry was too expensive, he did what anybody sane would do and jumped on his paddleboard. Scott went viral after pictures of his crossing appeared all over social media.

A comedian by trade, Holt had a meeting with a prospective manager which could not be missed. as it was a once off event, Scott doesn’t get a place on the list, but it was incredibly impressive non the less![11]