There’s nothing wrong with a little healthy competition. Of course, it’s much more interesting when the competition is unhealthy. People will sometimes go to extreme lengths to get back at their rivals.

Dedicated one-uppers have erected statues in clear view of their rivals, built fences around their homes, and even built towers named after their rival’s penises. At other times, revenge-seekers have chosen far less amusing methods, such as murder, poisoning, or some other weird plot. This list contains ten of the weirdest things we’ve found.

10 Egypt Builds 187-Meter Tower To Spite The US 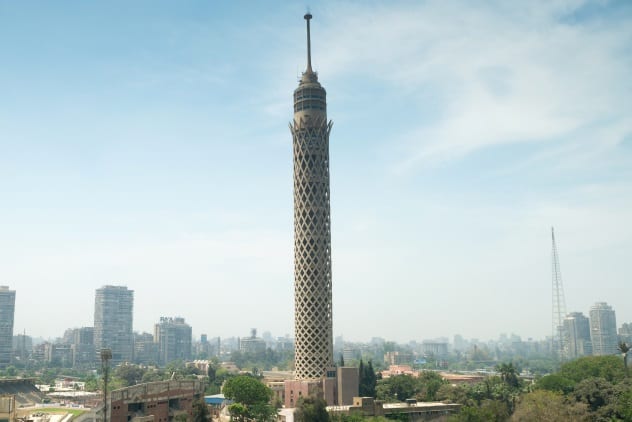 The 187-meter-tall (614 ft) Cairo Tower in Egypt’s eponymous capital is said to be “Egypt’s giant middle finger to America.” The tower was built by Egypt’s president Gamal Abdel Nasser after a political fallout with the US government. Its construction was funded with bribes the US government had paid to Egypt.

In 1952, Nasser deposed King Farouk in a coup. He soon met with Kermit Roosevelt, a CIA agent who wanted Egypt to bank with and buy weapons from the US instead of Britain. As part of the deal, Roosevelt paid a $1 million bribe and promised Nasser more money “for purchasing presidential security accoutrements.”

Nasser was unimpressed with the deal because he did not want the US interfering in Egypt’s issues. So he used the $1 million bribe to fund the Cairo tower, which was completed in 1961. Nasser probably added more money, because the tower reportedly cost $6 million. Today, the tower is also referred to as el-wa’ef rusfel (“Roosevelt’s erection”).[1]

The tower became controversial in the 1990s after some Islamic scholars condemned it because it supposedly excited Egyptian women. But honestly, who wouldn’t be excited by a giant penis by the seaside? 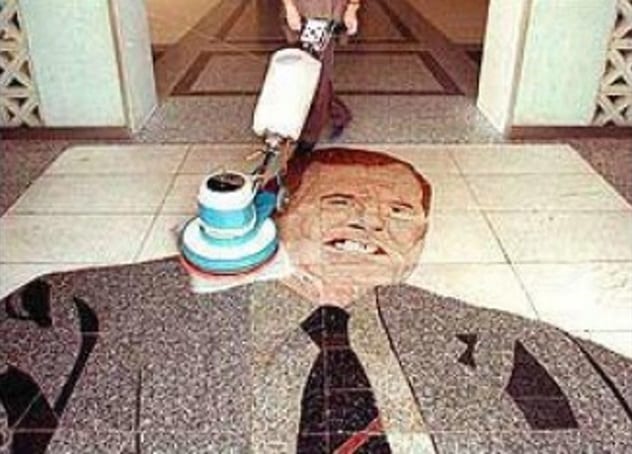 In 1991, the First Gulf War ended with the heavy defeat of the Iraqi army.

Reeling from the pain and shame of defeat, Iraqi president Saddam Hussein decided to take his pound of flesh from US president George H.W. Bush. Saddam installed a mosaic of President Bush in the foyer of the Al-Rashid hotel in Iraq.

The choice of the hotel was strategic. Al-Rashid was commonly stayed at by foreign visitors. In fact, foreign journalists lodged in the hotel during the First Gulf War. The mosaic was positioned at the entrance so that foreigners could not avoid stepping on it. Several US diplomats would later step on it when they visited the hotel.

In the US, the mosaic would be passed off as another childish prank. In the Middle East, it is a great insult. Pointing the sole of your foot at another person is considered an insult. Using their image as a doormat is the ultimate insult. US forces destroyed the mosaic when the US invaded Iraq in 2003.[2] 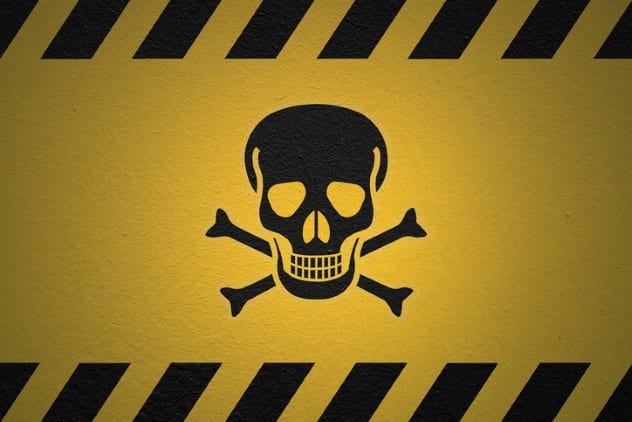 In September 2002, Chen Zhengping of Tangshan, Jiangsu Province, China, doused the snacks sold in the store of a competitor with rat poison. The incident left 38 people dead and around 200 hospitalized. The figure could have been much higher because the Chinese government censored details of the incident.

Schoolchildren and soldiers were the major casualties of poisoning. They bled from the mouth after eating the poisoned snacks. Some even collapsed right at the competitor’s store. Chen escaped after the incident but was later arrested. He said he only wanted to make people sick and never planned on killing anybody. He was sentenced to death for his actions.[3] 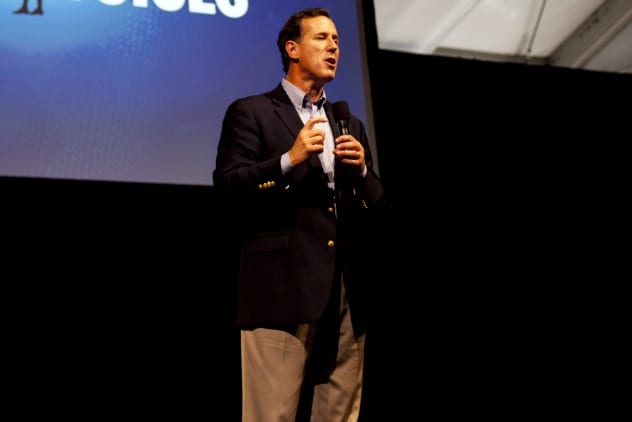 What happened next is what we remember today as the “Rick Santorum’s Google Problem.” Savage’s website and other related websites popped up whenever people searched for “Santorum.” The website even ranked higher than Santorum’s own site for his campaign to gain the Republican nomination for the 2012 presidential elections.[4]

Santorum complained to Google, which later tweaked its search engine so that Savage’s website went down in the results. However, this probably did little for Santorum because Urban Dictionary’s page for “santorum” took over as number one. As of this writing, Savage’s site is still the first result on Google when searching for “Santorum.” A Wikipedia page about the debacle is second, and the Wikipedia page about Rick Santorum the person is third. A Wiktionary page for “santorum” is fourth, and Urban Dictionary’s page is fifth. 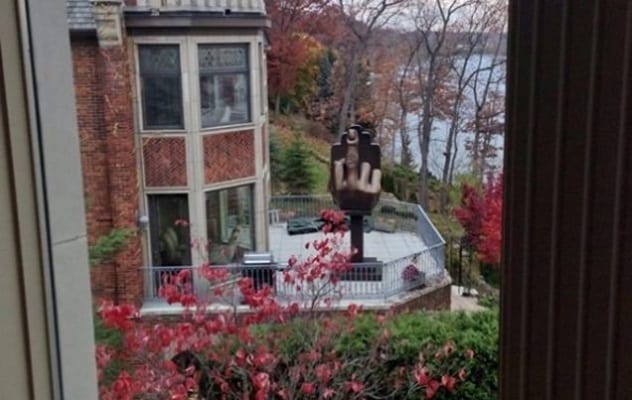 In 2013, after what was presumably a bitter divorce, Alan Markovitz decided he was not done with his ex-wife, Lea Tuohy, just yet. The Michigan strip club owner bought the home next to hers and installed a $7,500 3.5-meter-tall (11.5 ft) statue of a middle finger next to her window. He even added spotlights to make sure she had no problem seeing it at night.

Markovitz later claimed the statue was actually directed at Tuohy’s new boyfriend, with whom she had an affair at the time she and Markovitz were still married. Markovitz added that he got the idea after a realtor informed him that a home near his ex-wife’s was for sale.[5] 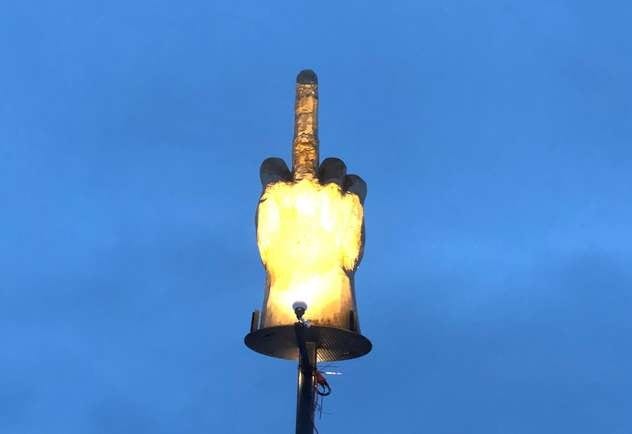 The middle finger statue is not reserved for exes. The town officials of Westford, Vermont, also got theirs in 2018. This time, it was from local resident Ted Pelkey, who was bitter after they’d repeatedly rejected his permit to build a 743-square-meter (8,000 ft2) garage on his 11-acre property. The garage would have housed his business.

Town officials claimed Pelkey’s application had “fallen short of the town’s standards.” Pelkey says officials rejected his application over some personal issues he had with them.

In response, Pelkey installed the $4,000 statue on a 5-meter (16 ft) pedestal so that town officials could get the message from a distance. Like Markovitz, he also added spotlights so that they could see it at night. The town couldn’t remove the statue because it qualified as public art.[6] 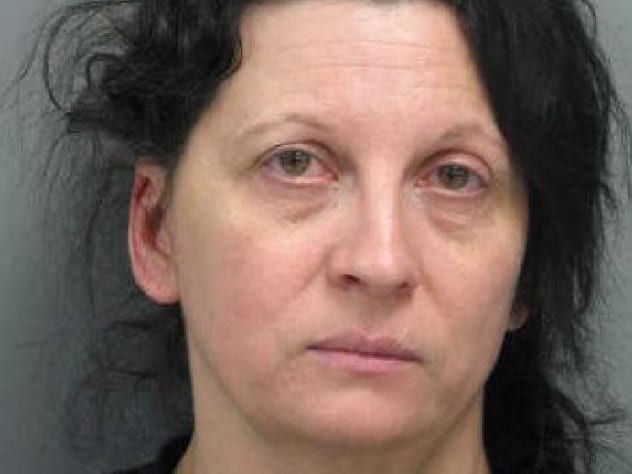 On the morning of November 12, 2012, Cari Farver of Macedonia, Iowa, sent a heartbreaking message to her mother, Nancy Raney. Farver wrote that she had broken up with her boyfriend and might check into a mental institution. Three days later, she sent a text to inform her employer that she had gotten another job in Kansas.

On New Year’s Day 2013, Farver posted on Facebook, telling her friends that her former account was hacked and that her boyfriend, Dave, had proposed to her. Meanwhile, Raney got suspicious and filed a missing persons report with the police. Four years passed before police discovered that Farver had been dead since 2012.

She was murdered by Shanna Golyar, her rival, who also wanted to be with Dave. The text messages and Facebook posts were part of an elaborate smokescreen Golyar had created to conceal the murder. Golyar sent all the messages. At one point, she even created several posts to make it appear as if she and Farver were exchanging words on Facebook.

In truth, Goylar was controlling both accounts. Killing Farver was not the only way Goylar tried to ensure that she got Dave all to herself. At another time, she lied to the police, saying that an unnamed woman who’d had a child with Dave had shot her.[7] 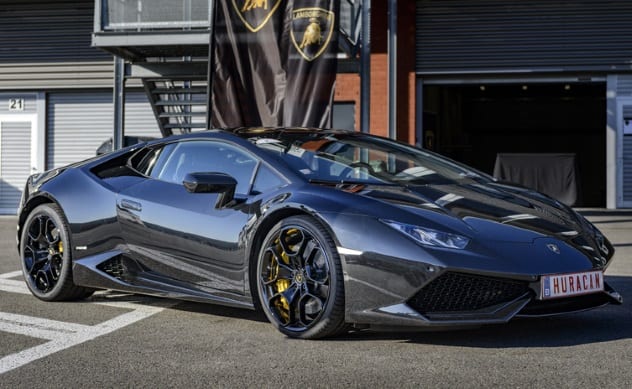 Tractor maker Ferruccio Lamborghini, who had a liking for sports cars, bought one of the modified Ferraris. However, he was displeased with it because it had a poor interior and often required servicing. He also hated the unreliable clutch, which often required replacement.

Lamborghini informed Ferrari about the clutch problem, but the arrogant Ferrari rudely told him off. The angry Lamborghini returned to his factory and modified his Ferrari sports car to his taste.

Ferruccio Lamborghini knew a thing or two about engines, clutches, and drivetrains from his tractor-making experience, so he decided to start making sports cars. He opened a factory close to Ferrari’s factory and even poached some of his workers. The rest, as they say, is history.[8] 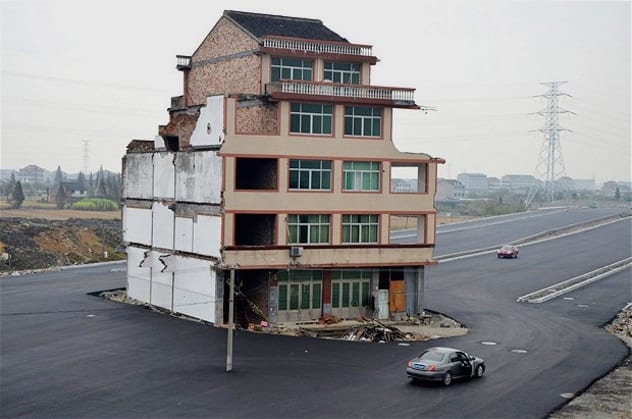 China has built lots of roads and highways within the past few decades. Private property has sometimes stood in the way. The government strategy is to pay the homeowner some compensation to move. However, some residents have refused the money because it is too small.

These people are called Dingzihu. Their houses are called nail houses and are a sign of defiance against the Chinese government. However, the determined government sometimes gets cranky and just builds its highway anyway.

In one notorious case, the government built a highway around the five-story home of 67-year-old Luo Baogen in 2012. Pictures of the house in the middle of the road went viral. Baogen eventually relented and sold his home to the government for 260,000 yuan. The house was demolished.[9] 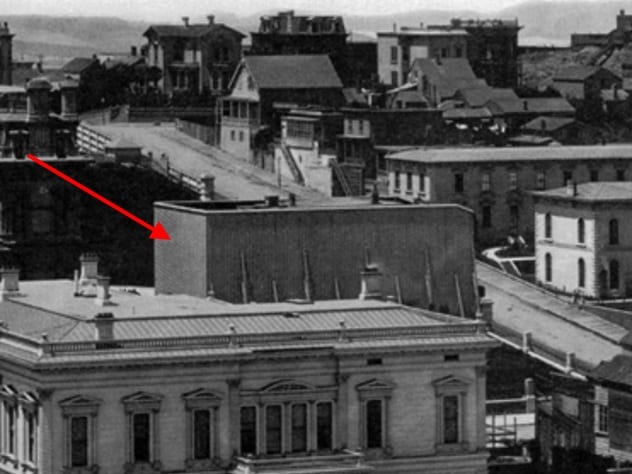 In 1855, a man named Nicholas Yung built a modest home on Nob Hill, San Francisco, California. By the 1870s, however, the hill had become the choice location for the rich because it offered a view of the main San Francisco town and several other hills.

Central Pacific Railroad executive Charles Crocker was one of the millionaires who moved to Nob Hill. He bought the area around Yung’s home and offered to buy it as well. Yung declined. Crocker wouldn’t take no for an answer and was determined to get Yung’s property even if it meant playing dirty.

At one point, he ordered the men using dynamite to level the ground for his home to direct the fragments toward Yung’s house. When that didn’t work, Crocker built a 12-meter-tall (40 ft) fence round Yung’s home. The fence became a tourist attraction and was called Crocker’s Spite Fence or Crocker’s Crime.

Crocker himself had made so much money because he bypassed the more expensive American workers for cheap Chinese labor. Anti-Chinese sentiment had sprung up due to economic depression, and many Americans blamed the Chinese for their joblessness. Denis Kearney jumped on the anti-Chinese sentiment and formed the Workingman’s Party of California (WPC). Its slogan was, “The Chinese must go.”

Crocker’s Spite Fence became the symbol of the party and evidence of the evils of capitalism. Many members joined the party because of the fence. The WPC held rallies near the fence and threatened to demolish it if Crocker did not do so first. However, the WPC never executed its threat. The fence was demolished after Yung finally sold his home to Crocker. In 1906, Crocker’s property was mostly destroyed by the great fire that followed that year’s infamous earthquake. The Grace Cathedral stands there today.[10]