Did you ever get an action figure that, at first glance, seemed like He-Man but was actually called ‘Man-man’, rode a dragon instead of Battle Cat, had a fully cross-guarded sword like William Wallace and his banana hammock was a particularly toxic lime green hue instead of the majestic brown fur loincloth your beloved hero sported so wonderfully? Kids have a very well calibrated inbuilt bullcrap-detector, but what about us over-10s? Why do so many parents buy knock off toys in lieu of the real deal? Laziness? It could be that branded toys are too expensive. Well, if money is the barrier, why not rely on other means to entertain their kids? Nobody wants a ‘Man-man’. Maybe these lovers of ‘not-quite-the-real-deal’ stuff are the target audience for the entries in this list. One or two entries, however, are undeniably awesome; intended as parodies or just inadvertently entertaining. So let’s take a short hop into the rabbit hole of this fringe genre. Caution: There is no rope ladder.

‘Süpermen Dönüyor’ is a Turkish movie released in 1979 which takes the ‘Man of Steel’ and reframes him through a very different lens. The story is very close to the original Christopher Reeve film, just set in Turkey rather than the States. They even use some of the score lifted from the US version. And the James Bond theme.

This entry isn’t a simple appeal to get some ‘silly foreigner’ laughs—place yourself in 1970s Turkey; stuck in the middle between a crumbling, dangerous Soviet Russia and the untrusting, cynical West, all whilst trying to resist the emergent Islamism being fostered in the Middle East and Central Asia. Would you put to death the man who steals a loaf of bread for his starving family? Oh, and the director’s name? Kunt Tulgar. This film, much like the era, is a veritable ‘Tayfun’ of disbelief… that’s the main character’s name, by the way.[1]

9 Batman, Spiderman and Godzilla… in a Video Game About a Ninja

And don’t forget a Terminator and a Rambo rip-off to boot! God, I loved this totally crazy, beautifully designed and utterly impossible to complete Sega Megadrive game. Along with iconic titles like ‘Altered Beast’, ‘Toejam & Earl’ and ‘Streets of Rage’, ‘Revenge of Shinobi’ gave Sega the ability to chug along as a cool alternative to Nintendo’s domination of the video gaming world in the late 80s and 90s. Despite the clear merits of having great graphics, innovative level design and a killer soundtrack, it was the bizarre choice of Batman, Godzilla, Spiderman, the Terminator and Rambo as antagonists that really cements this game’s place in the player’s memory.

The ultimate brain strain comes about when, after a solid couple of hours navigating the ingeniously tough levels, you face-off against a clear Rambo rip-off whose name is (seriously, this is no joke) ‘Rocky’. Game director Noriyoshi Ohba apparently admitted that the presence of such clearly stolen characters were testament to his “lack of creativity”. Well Mr. Ohba, anyone who designs an antagonist who morphs from Spider-Man into Batman is not lacking in creativity…sanity, maybe.[2]

This movie is a crossover special that takes place within the central character himself, a concept that is far more compelling after a healthy dose of DMT… which is, incidentally the only way one could enjoy this movie based on its own merits. A Filipino version of James Bond, named James Hika, teams up with Batman and Robin to take down an evil communist organisation that threatens nuclear Armageddon unless all nations accept them as their overlords. So far, so 60s. Is it weird that the same actor plays both James Hika and Batman? Yup. Is it weird that this feels like a slightly longer, slightly more Asian episode of Adam West’s version of Batman? You bet. Is it weird that the most humorous moment in the film is when James gets bitten on the butt by a giant centipede? Uh-huh. Is this just weird? Pass the DMT.[3]

7 A lot of Games made by Gameloft

Many of the entries in this list are lo-fi, cheap, clearly cynical attempts at cashing in on the name recognition and relative success of larger properties or, arguably, works of homage and parody. What happens when the clearly derivative property is actually really good? Zelda games are great. The Gameloft rip-off of Zelda is good. You can see the issue here.

Gameloft, a company founded by former Ubisoft bigwig Michel Guillemont, has a host of games, all pretty high quality, that bare more than a slight resemblance to pre-existing properties. From Halo to Call of Duty, you can find a damned good version made by these Gallic gamesmiths. They have a pretty decent following too; lots of detractors but just as many supporters. This seems to be a case of Icarus flying just close enough to the sun to get his wings singed, but not quite melted. Careful now Gameloft, heed the warnings…bet they’ll release a text-based adventure game starring Icarus now I’ve said that.[4]

Who thought the shark in ‘Jaws’ was kind? Can a shark be kind, or cruel? The fifth (or first unofficial) incarnation of the iconic ‘Jaws’ shark can, it seems.

The plot is basically the same as the first Jaws movie: shark threatens small coastal town, local guys and a scientist go to kill it, they save the town from economic ruin with a few lost limbs along the way. It’s so close to the original Jaws films that it uses footage from the originals, (plus footage from two other Italian Jaws clones, ripping off the rip-offs, how meta). The film was released straight to DVD with a planned Blu-ray release, packaged as a double feature with the masterfully named 1983 Spanish/Italian sci-fi crapfest ‘Exterminators of the Year 3000′, but was scrapped due to Cruel Jaws’ use of copyrighted footage. That’s the real cruelty here. Sad Jaws.[5]

Snakes On A Train Trailer

Train? Is that right? Wait, let me IMDB it. Damn it, tricked again! There’s something weird about the notion of a movie that rips off another movie that itself feels like a joke. It leaves a sour taste, leaves me feeling grubby. Moreover, Snakes on a Plane is funny, over the top and schlocky in that ‘so bad it’s good’ way that makes it an idiosyncratic, totally bizarre, self-deprecating work of genius. You’d think that these qualities would be what the stealy-stealersons over at production company ‘The Asylum’ would aim to copy.

Nope. ‘Snakes on a Train’ is just a bad, low-budget creature feature. Samuel L Jackson must be spinning in his Beverly Hills mansion.[6]

Many of us, on the more nationally fragmented side of the Atlantic, can remember the really low-grade, blocky, poorly rendered animated cartoons for kids, seemingly all made in France, that were sold to TV firms across the continent and broadcast to a generation of bemused children who just wanted to watch Scooby-Do. ‘Ratatoing’ is Brazil’s version of this trend. ‘Ratatoing’, which sounds a little like a verb to describe rat torture, is an animated series that follows on the coat tails of Pixar’s smash hit ‘Ratatouille’. The central character is a French rat that lives in Rio de Janeiro who just so happens to be an amazing chef. The uncanny animation is enough to haunt your dreams for years to come. The premise, which was enough to sustain the film, is stretched out for a whole series in this train-wreck. What’s worse is that the studio responsible for this crime against children’s entertainment seem to only pump out Pixar rip-offs. ‘Cars’, ‘Up’ and ‘Wall-E’ all get a degenerative makeover from Video Brinquedo, making ‘Chitty Chitty Bang Bang’s’ Child Catcher seem like a rank amateur in the domain of ruining kids’ lives. Now who’s up for watching some masked men engage in a quick ratatoing session? Just me, then? Ok, but it beats watching an episode of this awful series.[7]

“Salvami, l’Uomo Ragno” cried Maria Gianetta as she fled from the evil Folletto Verde. Remember that famous scene? Neither do I, and you won’t find that scene anywhere. Nor do I remember Spider-Man having a pump-action shotgun. That, you will find. You lucky devils.

This entry is an intentional parody, an Australian-made homage to 60s and 70s Italian action films like ‘The Three Fantastic Supermen’, which itself was a part of the brief spate of movies that glorified older, fringe cinematic sub-genres (Quentin Tarantino’s ‘Death Proof’ and Jason Eisner’s ‘Hobo with a Shotgun’ are two prominent examples). Being the only entry in this list that is intentionally funny, there’s no point in picking at inconsistencies or highlighting the infringements and liberties taken. This entry has been lodged for one reason; this is how big this sub-culture/fringe interest is. Check out the film on YouTube and the great comedy series, ‘Danger 5’, made by the same guys.[8]

More often than not, makers of copycat movies and other intellectual properties tend to rely on one sneaky renaming technique. Like ‘Superguy’ instead of Superman, ‘Catman’ instead of Batman. But, a veritable double tap of ‘rip-offitude’ in the title is rare. A synonym and a rhyming cognate? These guys are good. These guys, with their amazing re-titling, hit a double, loading the bases and may just win the ‘Cashing in on Name Recognition World Series’. Plus, the eponymous character is purple. They won.

With liberal (nearly total) use of stock footage and video files purchased from the internet, this movie feels more like a film by famed schlock, low-budget impresario Roger Corman than any film actually directed by Corman himself. This is the type of film that, depending on one’s mood and blood-alcohol level, you’ll either laugh yourself into a herniated heap or throw the nearest hard object (the remote control, a work boot, a loved one) square through the TV screen.[9] 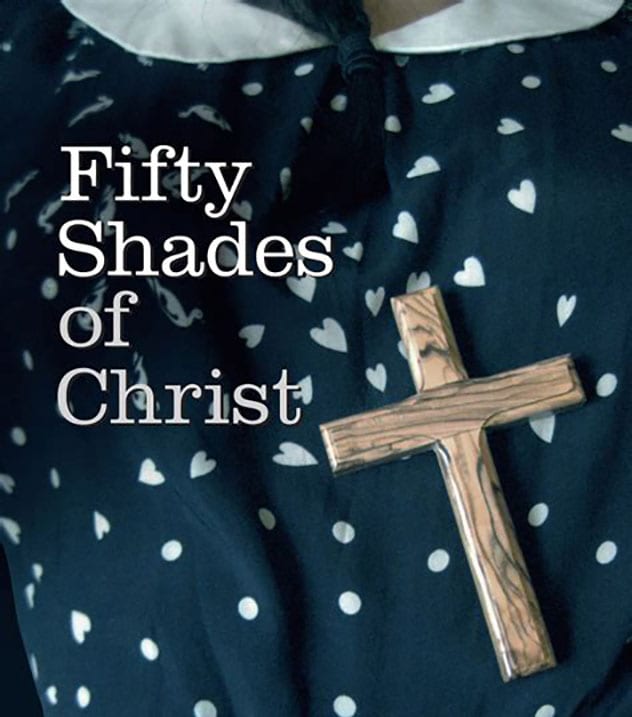 There is nothing wrong with fan fiction, genre-bending parodies and the like. Hey, more power to motivated Christian authors who want to capitalize on a franchise’s success; it can be done well. But don’t be too judgy (I’m sure it mentions something like that in the Bible), people like the original Fifty Shades franchise. Mock it, that’s great. Make something with a fun parody of the name but make your book unrelated to the original, that’s fine. But, much as we get po-faced, snarky reviews from publications like The Atlantic, illogically pitting the clearly ‘guilty pleasure’ book against Booker prize nominated tomes for comparison, we also get Christian parodies that decry the ‘sin’ of the original characters and turn them into born-again bores (with worse prose than the original books, which is a feat). Do you not believe in ‘live and let live’, or do you just have a guilty conscience?[10]