They can lift buildings clean off the ground, take on the force of a dying star, and perfect time travel to bring back half the world’s population. However, their troubles don’t end with the defeat of a purple villain or a spectacular fight against Steppenwolf.

All the awesomeness in the world can’t prevent some superheroes from struggling with more “human” issues such as depression, PTSD, and bipolar disorder. Here are 10 of your favorite heroes who battle “evil” as well as their even darker inner demons.

Iron Man 3 opens with Tony Stark narrating: “A famous man once said, ‘We create our own demons.’ ” In Stark’s previous outing in The Avengers, which is set six months before Iron Man 3, he comes uncomfortably close to death. This sets up this opening line perfectly, especially considering the issues Stark grapples with during the third Iron Man movie.

We see him changing the subject when Pepper Potts tries to warn him against the dangers he will continue to face as a superhero. He also tries to minimize his night terrors by avoiding sleep as much as possible (which, naturally, does nothing to help the situation). When asked to sign children’s pictures about the battle of New York, Stark has to leave the building to get his emotions under control.

These are sure signs of anxiety. Stark further tries to deal with them while developing new Iron Man technology to avoid certain life-or-death situations in his future. Several online blogs and forums have also discussed evidence that Stark had developed PTSD after the fight against Loki and his minions in The Avengers—hence the anxiety attacks that often overcome Stark.[1]

Some fans have praised the way the struggle with anxiety and PTSD have been portrayed by the hugely popular Robert Downey Jr. They say that it has helped to minimize the stigma around mental health issues.

Thor wasn’t exactly himself when he appeared on-screen again in Avengers: Endgame five years after he finally chopped off Thanos’s head. When Hulk and Rocket go looking for him in New Asgard, they are shocked to find that Thor has gained weight and apparently forgotten to wash his grown-out hair. He is also sporting a beard that could rival that of ZZ Top’s Billy Gibbons.[2]

However, many fans were disappointed by how the film set up Thor’s scenes “for laughs” instead of recognizing that the superhero was suffering from PTSD, depression, and alcoholism. Thor’s mental health decline had been coming for a while, even before Thanos appeared.

Thor had lost his mother, his father, his beloved hammer, and his girlfriend. After the arrival of Thanos, Thor also lost his brother, Loki, and his friend Heimdall in traumatic fashion. Not to mention that Thor felt survivor’s guilt after he failed to stop Thanos the first time around.

Some felt that Thor’s mental health struggle could have been treated with more respect. This also could have led to a lessening of stigma in the same way that the abovementioned Iron Man scenes have done.

Tom Holland’s Spider-Man is probably the most relatable Peter Parker we’ve had in years. He openly displays emotion when fading away after The Snap. In heartwarming fashion, he is also happy to see Tony Stark again when the superheroes return for the epic battle at the end of Avengers: Endgame.

Peter’s grief-stricken face when Tony dies had many fans reaching for the tissues. In short, Spider-Man is one of the most “human” superheroes in modern Marvel films.

Mysterio revels in crushing his opponents psychologically. He convinces Spider-Man that he is schizophrenic and suffers from multiple personality disorder. This leads to Spider-Man seeking help from a psychiatrist and almost losing his mental stability.[3]

Although this might have been part of Mysterio’s plan to carry out his evil schemes, many fans believe that Peter Parker really does struggle with a form of mental illness. Some believe it to be borderline personality disorder as Parker struggles to accept his responsibilities as both Spider-Man and Peter Parker. He only really “finds himself” when decked out as the superhero. Not to mention possible depression after the deaths of his parents and his uncle Ben.

Captain America is the quintessential good guy superhero. He always has a ready smile, is willing to help, and doesn’t stop fighting until evil is defeated. Not to mention that he possesses, in Ant-Man’s epic words, America’s ass. However, tragic events in Steve Rogers’s past have led him to become depressed, which is evident in some of the scenes focused on him.

One deleted scene from The Avengers shows Rogers leafing through documents that confirm all his old friends have died. The scene depicts his emotional state by leaving him in darkness and dimming the color surrounding him.

In a scene from Captain America: The Winter Soldier, Rogers declines to go out on a Saturday night because he is still grieving the loss of his friends. Later, he states that he doesn’t know what would make him happy and he wouldn’t know what to do with himself if he had to stop being Captain America.[4]

In addition, Rogers suffers from sleep impairment, guilt over Bucky’s apparent death, and a lack of willpower to save his own life when in mortal danger. This all shows the deep depression that Captain America continuously struggles with throughout several of his films.

Wanda Maximoff (aka The Scarlet Witch) and her brother, Pietro (aka Quicksilver), have a hazy background. Their origin story has been retconned many times and created several conflicting stories about their childhood. What is known, however, is that Wanda and Pietro were often left isolated and starved when they were children. This led to Pietro being cold in character and Wanda being dependent on men who couldn’t fulfill her emotional needs.

Wanda eventually ended up with Vision, an android, who seemed to provide everything she needed. However, their happiness didn’t last. In the comics, Vision and Wanda had two children who were reassimilated by Mephisto. The couple were divorced at this point, and Wanda turned to Agatha Harkness for comfort.

It seemed that all these unfortunate events, coupled with Wanda’s unstable childhood, led to her becoming unhinged and suffering a psychotic break during which she wiped out several mutants. Although the comics would define this as “craziness” or “madness,” the break was a long time in the making. It caused Wanda to break ranks and “go rogue” several times.[5]

This iconic phrase, together with “Hulk, smash,” is just about the most memorable dialogue when it comes to Bruce Banner and Hulk. The first phrase, however, reveals the most about the angry green hero. Bruce Banner is a notably shy nuclear physics genius. When angered, he turns into Hulk, who smashes everything in his path.

This transformation has led to fans believing that Banner suffers from dissociative identity disorder or multiple personality disorder. They also believe that he had been suffering from the disorder long before he transformed into Hulk. There are several Hulk personas that add weight to the theory, including Professor Hulk and the Green Scar.[6]

In the comics, Hulk realizes that anger and violence are taking a toll on his mental health. He seeks help from psychiatrist Doctor Leonard Samson and starts on a journey to improve his mental health after a face-off with the Maestro (an alternate evil version of Hulk).

In the movie Logan, Wolverine (James/Logan Howlett) suffers from alcoholism, doesn’t care about his own well-being (or anyone’s else’s), and doesn’t want to engage in conversations about mutants.

It soon becomes clear that Logan is grappling with other problems, too. While taking care of an aging Professor X, Logan struggles with PTSD and night terrors. Even before these events, Wolverine had displayed symptoms of bipolar disorder with severe mood swings and depression after witnessing his father’s murder. His rage at the murder led to the accidental death of his mother.[7] 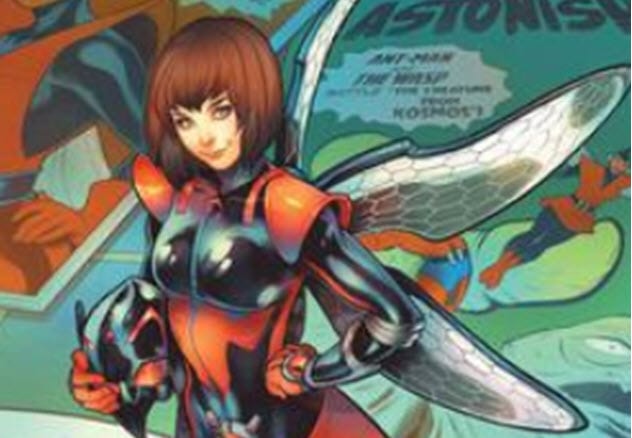 In the Unstoppable Wasp #5, Nadia van Dyne is forced to face her own mental health when she realizes that she is bipolar. It seems that she inherited the disorder from her father, Hank Pym, along with the ability to change her size. Nadia’s mentor, Janet van Dyne, lets her friends know that Hank had bipolar disorder and that Nadia’s messed-up chalkboard “looks a lot like a manic episode.”

In #4, Nadia also displayed symptoms when she couldn’t remember whether she was assembling or taking apart a walkie-talkie. She is depicted as being unable to sleep or eat until her work has been done to her satisfaction. She also lashed out at several close friends.

In the #5 issue, she quickly moves into a depressive state after she retreats to her laboratory and faces episodes of bipolar rage.[8]

Marvel hoped that introducing bipolar disorder into the comic would help to educate readers about the mental illness.

Like many other superheroes, Bruce Wayne suffered a traumatic childhood incident—in this case, seeing his parents murdered in Crime Alley. It turned him toward the fight against crime in Gotham City and made him into an unlikely superhero. Converting his grief into something constructive, Wayne trained himself to be a fighter and uses his skills to rid the streets of criminals while dressed as a bat.

It soon became apparent that Wayne is a high-functioning depressive with persistent depressive disorder. Although he lives a fulfilling life, he is still given to bouts of despair. He uses his depression as motivation to move forward while cutting everything out of his life that doesn’t contribute to his goals.

Fortunately, Batman has a group of people around him who help him to see the light. Notably, this includes Alfred Pennyworth, who acts as Batman’s confidant and occasional amateur therapist.[9] 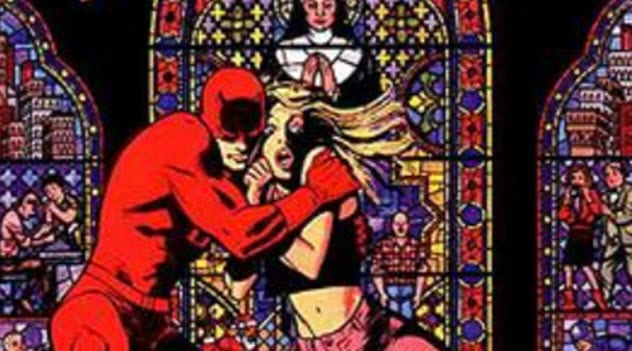 Matt Murdock (aka Daredevil) also suffers from ongoing depression. His girlfriend Elektra was murdered, and Karen Page, another love, also died. Eventually, his wife, Milla, had a mental breakdown.

Murdock has a Catholic background, and his depression is depicted as a demon that he cannot escape. In the 1986 “Born Again” story by Frank Miller, Daredevil is destroyed by Kingpin. Murdock also loses his job, his house, and the security of a sound mind. His depression threatens to overpower him.

Previously, his mother suffered from postpartum depression. It was so bad that she tried to kill Murdock when he was an infant. This confirmed that Murdock’s depression was inherited.[10]

His struggle has proven valuable to comic book and superhero lovers worldwide as those who suffer from depression have found a kinship with Daredevil. Matt Murdock is also inspirational in the way he accomplishes various feats despite the crippling disorder.