Almost everyone goes through some sort of a ‘phase’; a double denim phase, that time you got a Mohawk, growing your own chilli peppers, getting weekly colonics. Some of these passing fads stick, growing into movements, lasting trends or subcultures, replete with specific conventions, jargon and even taking on a pseudo-religious air. Here’s a list of identities, clubs, hobbies…stuff people like to do, that are still around and show no signs of going away.

Who knew we’d still be seeing goths two whole decades into the 21st century? Why won’t they die? Well, in fairness, they seem to already be dead. It is mildly ironic that the go-to trend for outcast, non-conformist types turns out to be one of the most wide-spread, long-lasting subcultures of the 20th and 21st century. But goths don’t care. They don’t care about much of anything (except running out of ‘midnight onyx’ lip gloss).

Goth started in the 80’s, from the fragmentation of English punk. Why has it endured? Perhaps it is due to how it has drawn an aesthetic from many movements and eras of the past, (unlike the similar ‘New Romantic’ movement which focused more narrowly on the Georgian era). 50s monster movies, German expressionist cinema, gothic literary figures like Edgar Allan Poe, Victorian fashion and even darker elements of European folklore and African and Caribbean voodoo are all sources of aesthetic inspiration for goths, giving the subculture a timeless air. Goth, it could be said, is not the ‘New Black’ but more the ‘Perpetual Black’.[1]

The Matrix is real, we all know that by now. I mean, 2020 has pretty much removed all conjecture on the subject—reality cannot be this crazy, this random. Hackers, a now venerable community that live beyond the digital fringe of civilisation, seem to have known this for a while.

Hacker culture is fundamentally about finding creative ways to solve difficult problems, primarily within software systems. One burning question they solved: How can you make an old fashioned dot-matrix printer play musical notes? Hackers will go into the belly of the mechanical beast and make it do whatever they damn well please. Dating from the early 20th century, hacker culture has developed alongside the growing free software movement, making this subculture perhaps the only one on this list that could truly change the world in a meaningful way. If the real world were ‘real’, that is, but given the ease that these guys and gals can manipulate our cyber reality, it seems to all be a simulation anyway.[2]

“This is the dawning of the Age of Aquarius” sang the band ‘The 5th Dimension’ in 1969. We’re still waiting, hippies.

From crystal healing and reflexology, reappraising defunct divination practices like I Ching and astrology to claiming belief in debunked myths like the existence Atlantis and ancient aliens forming everything before Christ came along, this movement is so loose it is a real miracle it’s still about. It seems to be a one-size-fits-everything-outside-science-and-organised-religion type of thing.

To be a bit fairer to this lot, there doesn’t seem to be much malice there (often… we’re looking at you, cults). A bit like Mormonism, they just don’t hold much stock in objective reality or the scientific method whilst making claims that should fall well within that sphere. Sure, crystal healers make money off people who may be very sick, but usually both parties actually believe in the power of lumps of pressurized rock. Have you ever met a new-ager that scared or offended you directly? Well, Charles Manson, I guess… then again, you probably never met him.[3]

Furries | Down the Rabbit Hole

Don’t click away! This subculture may be inextricably linked to creepiness, but it actually has a fascinating history. First off, a little housekeeping. Is furry fandom all about sex? No it isn’t…for all of them, anyways. Still here? Good, it gets better, I promise.

Furry fandom finds its origins in an unexpectedly cool place—the ‘underground comix’ scene of the late 70s. By 1983, the term ‘furry’ was being used by fans of anthropomorphic animals in Sci-fi, cartoons and comic books, who’d meet at expos and conventions, setting up online communities as early as 1990, further growing the fandom through to the twenty-first century. These guys and gals like to dress up as cutesy-looking animals and… that’s it for many. For around 37% of furries, they like to dress up and then get it on like, well, cute little furry animals. If you love cartoon animals or want to make love to cartoon animals, maybe this lifestyle is for you.[4]

You’ve seen these guys and gals, I can pretty much guarantee it. You see, gopnik culture is simply a regional flavour for, arguably, a ubiquitous and inevitable subculture which occurs anywhere that has sportswear brands, small cars that are easily modified and some form of electronic music. In Britain they go by many names, more commonly ‘chavs’. In South Africa they are a part of Zef culture. One could argue that hip-hop culture US cities and the latest manifestation of ‘Cholo/Chola’ culture in Latin America and the US can also be seen as a part of this. Some call it ‘Street Culture’, ‘Working Class Drop-outs’ or ‘Gutter Stargazers’. Essentially, all these similar subcultures involve young, uneducated, disaffected people from lower class areas that society views as adjacent to, if not immersed in, loutish, sleazy and often criminal behaviour. Nice, right?[5]

Millennia ago, we didn’t wear clothes. This is the natural state for all other members of our shared animal kingdom. Having said that, we used to die pretty young, and being uncovered whilst having to face the elements may have contributed to that (alongside sabre-toothed cats, wood splinters causing sepsis and those pesky volcanoes dotted around the landscape).

Organised naturism started out in the British Raj in 1891 with the first recognised club, The ‘Fellowship of the Naked Trust’, formed by a judge in Bombay named Charles Crawford. Since this time, philosophical papers, pamphlets, films and documentaries have helped spread the utopian, stripped back way of life all through the world. But it’s not all hippy-dippy nonsense: Croatia, a real hotbed for naturism, has a booming tourism industry in the post-Yugoslav era. Nudist tourism accounts for 15% of the market. Not too shabby… although where you’d keep your wallet is a real head scratcher.[6]

“Yeeeew! Look at that gnarly swell coming in! This is gonna be radical, dude.” What should be scary to all of us is that this piece of surfer sociolect, a sub-category of hobby-related jargon that should only be understood by a small clutch of people, will be understood by nearly all English-speakers who read it. Surf culture has made one hell of a mark for a very niche pastime.

One could claim that surf culture finds its origins in native Hawaiian culture, at least in terms of the sport itself. It was Duke Kahanamoku, an Olympic gold medallist in swimming and a native Hawaiian, who is credited with popularised the sport of surfing, first by introducing the sport in Southern California in 1912 and then to Australia in 1914 by giving demonstrations in both swimming and surfing at Sydney’s Freshwater Beach. From this enthusiastic yet typically laid-back introduction (“You wanna see me do that thing with a plank of wood from the islands? No sweat, brah!”), fashion, language, movies and people’s lives have been shaped by this sport and the subculture it spawned.[7] 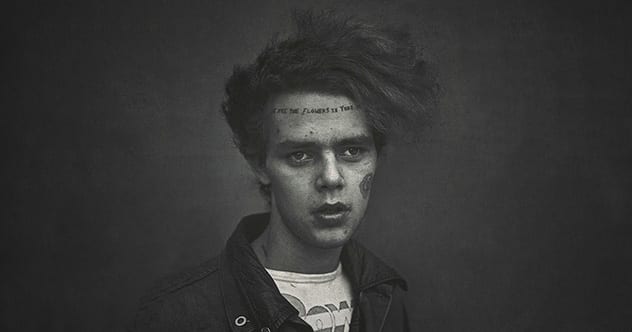 Who doesn’t love being spat on by a skinny yob with a safety pin through their nose? Punks certainly love this, and a whole load of non normative behaviours and political stances to boot. Many, many, many subcultures and musical genres have formed in the wake of both English punk and the New York scene, proving that punk is probably the most influential cultural movement of the latter half of the twentieth century.

So what is punk? Patti Smith seemed to think it was ‘freedom’. Joe Strummer said it was more about ‘attitude’ and ‘truth’. Author Chuck Klosterman seemed to partly agree with Strummer, adding that it was also defined by a ‘laziness’, a certain style over substance:

“…you didn’t even need to know how to play your instrument, assuming you knew how to plug it in. There was really no difference between Sid Vicious and anyone in London who owned a base”. Except Sid Vicious was, well, Sid bloody Vicious.

Punk, in it’ rawest essence, is about rebellion, about honesty and a very specific style that makes people looking at a punk say “hey, look at those ripped jeans and that mohawk hairdo. That person is a punk”. However this highly influential subculture is defined, punk’s enduring nature and ever evolving set of definitions shows no sign of dying and, unless the world falls into either an all consuming totalitarianism or nihilistic anarchy, will always live. Bollocks.[8]

“My most basic credo is: I never said freedom was cheap. And it ain’t. Never will be. It’s been the highest priced and most precious commodity in my life.”—Sonny Barger, author, actor and Hells Angel.

When military personnel return from war, they often find it difficult to settle back into society. This was as much of a problem in the 1940s as it is today, probably more so (Thanks, Hitler and Hirohito). Fighter pilots found it especially hard, finding the ‘normal’ life they had to lead nowhere near exhilarating enough after spending the last few years strafing fleeing SS units from the skies above Europe or fighting propeller-to-propeller with Imperial Japanese Zeroes. The only way to reclaim that freedom? Found a motorcycle group and tear up and down US highways on some kick-ass hogs. Hate the rules of the American Motorcycle Association? Form an unsanctioned, ‘outlaw’ motorcycle group.

What could go wrong? Well, all that unbridled freedom doesn’t provide you with any of the stuff you need to live. Many, but not all, outlaw motorcycle groups are now dangerous gangs, considered as influential and dangerous as any organised crime groups. Huge street battles, drug trafficking and contract murders are common fare for many groups. Still, one cannot deny the romance of leaving polite society behind, mounting a Harley and riding off to the next adventure.[9]

We’ll end on perhaps the most exciting, pulse-rate-increasing, in-your-face, tear it all down subculture on the list.

No, not the debauched, heroin-taking guys and gals from the novel/movie ‘Trainspotting’. I mean the spotters, cataloguers and general lovers of trains. You bathed in sweat yet? Are your nerves ready to burst?

There are loads of terms for a person who enjoy this hobby—’rail fan’, ‘trainspotter’, ‘anorak’, ‘gunzel’ and ‘foamer’, but the term ‘ferroequinologist’ is the preferred one (‘Ferro’ is Latin for iron, ‘equine’ is horse). It is difficult to consider a more meaningless way to spend ones time than seeing, noting and then discussing trains, but there is a real world benefit to this seemingly nerdish activity. The British Transport Police often appeal for info from avid trainspotters, and the BNSF rail company have asked American rail fans to keep them informed as to anything out of the ordinary so they can keep the railroads safe. Just for this service, we promise not to feed ferroequinologists to the furries…[10]

About The Author: C.J. Phillips is a storyteller, actor and author living in rural West Wales. He is a little obsessed with lists.