Horror films should be, well, horrific right? I mean it is right there in the name. But sometimes the division between what is frightening and what is funny is not always obvious. Movie makers go out of their way to make their audiences take notice so they strive to make the deaths in their horror films stand out from the usual stabbings, bludgeonings, and ghostly goings-on familiar to the genre. Some films take such glee in their stupendous deaths that they become horror-comedies. Or comedy-horrors.

Either way, here are ten horror movie demises so ridiculous they’re funny. And here’s the first list if you’re interested.

When people book into the Hotel Quickie they have only one thing on their mind. Yet despite their desire for quick sex they also show an admirable to make it safe sex. Unfortunately in this German horror film putting on a condom is one of the worst things you can do for your health.

Mackeroni survives the attack but others are less fortunate when their penises are bitten off. The condoms do not only attack men however, one woman commits suicide by leaping into a pool of water teeming with toothy prophylactics. 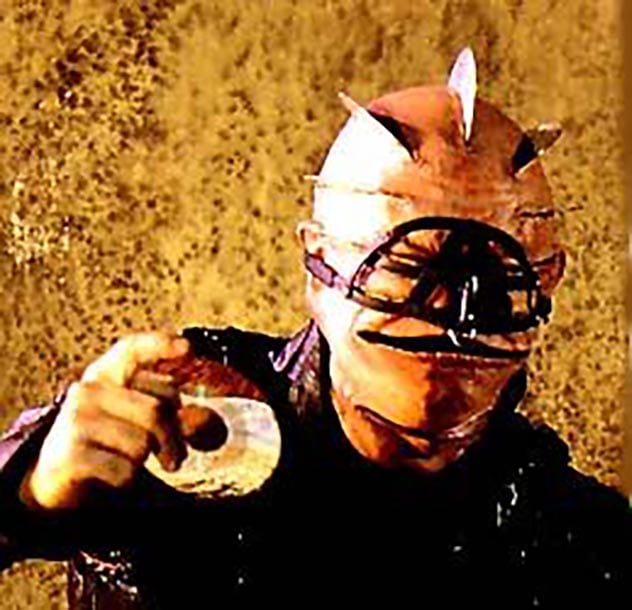 The Hellraiser films follow people who are foolish enough to release the Cenobites from Hell. Cenobites are people who have been transformed by their perverted pleasures into demons that subject others to fiendish tortures.

In Hellraiser 3 Pinhead, leader of the Cenobites, pays a nightclub a visit, causing all the creepy décor of the club to come to life. He massacres the patrons of the club. Some get off easy by dying in falls but others face a more brutal offing. One woman has her drink turn to ice and impale her through the mouth. The DJ gets the most ridiculously apt, and 1990s, death of the film.

CDs from his stack begin to levitate around his head menacingly before slicing into his skull, brain, and mouth. Unfortunately this is not the end for the DJ. Pinhead uses his hellish powers to transform the DJ into a new cenobite – named CD [LINK 2].

CD joins the diabolical rampage unleashed on the city using his new powers. These powers consist of having a CD in his belly that ejects discs. It is these that he throws to kill a poor cab driver and a police officer.

Rabbits are not the most threatening of creatures. Perhaps that is why the studio that produced this film changed its title from Rabbits to Night of the Lepus before its release. They also studiously left rabbits off of the promotional materials for the movie. But there is no avoiding the fact that the villains of this film are rabbits.

The movie begins with a rabbit being given a cocktail of hormones in an attempt to control the rabbit population on a ranch. Instead the rabbits begin to mutate into huge and unusually carnivorous monsters. The ranchers attempt to destroy the giant rabbits with dynamite but that just annoys them. The rabbits attack the farm.

In one of the greatest scenes in movie history dozens of normal sized rabbits are shown stampeding through a model of a farm before a rabbit’s paw crashes through a window and slashes a woman’s throat.

The 2010 movie Rubber has been described as the greatest film about a killer tire ever made. It focuses on the actions of Robert – the titular tyre. When Robert comes to life in the middle of the desert he begins by killing and crushing various items and creatures. Unable to crush a glass bottle he turns to his psychic powers to blow them up.

When Robert is run over by a truck he turns his powers on the driver and makes the man’s head explode. This is just the beginning of Robert’s rampage. Soon heads are popping all over the place and the police are called in to track down their man, or tyre.

Rubber offers a meta-commentary on horror films by having an audience on screen watching events as they unfold. But unlike audiences in a cinema these viewers are not safe from the machinations of the nefarious tyre.

Stephen King is the master of modern horror. His novels succeed in turning even the most mundane things into creepy threats. Films based on his books often top the box office charts. Surely then a film not only written by King, but directed by him, should be one of the best ever made? Maximum Overdrive, however, is not.

When the Earth passes through the tail of a comet all machines on the planet become sentient and malevolent. Bridges toss cars into rivers and arcade machines shock people to death. The most memorable murder of the movie however is reserved for the coach of a little league game. While buying his players soda from a vending machine it begins to launch cans at him. One hits him in the nuts while another crushes his skull.

Stephen King has disowned this film and vowed never to direct another one again.

5 Eaten by lions – The Happening

M. Night Shyamalan was once the golden child of Hollywood who reinvigorated the movie industry with his clever plot twists. Then he was declared a hack with only one trick up his sleeve and became the butt of everyone’s jokes. When you watch The Happening it becomes clear that something is dreadfully wrong – and not just in the plot of the movie.

When people begin to mysteriously commit suicide for seemingly no reason panic spreads across the globe. Some jump from roof tops, some drive their cars off the road, and some take the most convoluted routes to the afterlife they can contrive. In on scene a man is shown walking into a lion enclosure at a zoo. Apparently wanting to die he reaches out his hand towards the lions. But instead of antagonising them he just sort of stands there. Not the quickest way to die.

When the lions do attack the man he shows a superb lack of interest as they tear off his arms. The gory attack could be frightening if it was not so strangely filmed with bad CGI.

George Romero’s zombie films are masterpieces of horror that often come with a strong side of social commentary. Day of the Dead tells the story of one of the last outposts of humanity after a zombie apocalypse has destroyed the world. Whether there is any humanity left in the surviving humans is one of the central questions of the film.

The leader of the military outpost where the film is based, Captain Rhodes, becomes increasingly frustrated with the scientists he is supposed to be protecting. Eventually the zombies penetrate the underground bunker and Rhodes is chased through the tunnels by a zombie who has regained some of his motor functions and managed to grab a gun. When Rhodes opens a door and is faced with a horde of zombies he manages to spit defiance with his last breath.

Even while zombie fingers are tearing him in half and with his internal organs slipping out Rhodes manages to taunt his murderers. “Choke on ‘em!” he says, apparently forgetting zombies do not breathe.

When Wes Craven stepped out of the horror genre with the film Deadly Friend he hoped to make a sci-fi film full of complex character studies. Unfortunately the audiences first shown the movie wanted the bloody gore of Craven’s earlier works and the studio forced reshoots to bring more blood to the screen.

Deadly Friend tells the story of a young genius who creates a robot with real intelligence, and an overprotective nature. When the genius’ love interest is left brain dead he does the obvious thing of implanting his robot’s mind into her body. The new cyborg then goes on a killing spree.

An elderly neighbour who had taken the genius’ basketball earlier in the film comes face to face with the cyborg who gets her own back. The cyborg takes the basketball and obliterates the old lady’s head by throwing the ball at her. This leaves the old woman’s body stumbling about her living room until it collapses shaking on the ground.

Jaws was the film that made everyone afraid of the sea. It also proved that an exploding shark can be an extreme moment of triumph. Yet its sequel, Jaws 4 (Jaws: The Revenge), has one of the most absurd shark explosions ever captured on film.

When a great white shark begins following a family around the world and attacking its members it is left to matriarch Ellen Brody to stop it. She takes a boat out and plans to shock the shark to death with electricity. But when the shocks make the shark jump out of the water she drives the boat into it. Being impaled would probably have killed the fish anyway but for some reason that is never explained the shark explodes violently. The scene is also not helped by it looking as if it was filmed using tiny models in someone’s bathtub.

Michael Caine who stars in the film took the panning of this movie in good spirits. He has said “I have never seen it, but by all accounts it is terrible. However, I have seen the house that it built, and it is terrific.”

A Scene From Troll 2

Troll 2 has gained the reputation of being one of the very worst films ever made. Its production was troubled by an inexperienced cast, a crew that spoke very little English, and a bizarre special effects. The plot of the film revolves around vegetarians goblins who want to eat people – so they do the logical thing by transforming them into plants.

When the Goblin queen captures a girl and boy she gives them broth to drink. While the girl dissolves into green goo the boy, Arnold, is left staring helplessly as the goblins eat her remains. Arnold’s delivery of “Oh my God!” has since become a meme. Arnold’s fate is more drawn out when he is turned into a tree.

When a friend comes to rescue Arnold he pulls the bark covering his face off and Arnold pleads to be rescued. Unable to free Arnold from the dirt he is planted in Arnold commands him to “Grab the pot and drag me out quick!” Alas he is too slow and the goblin queen returns and turns a chainsaw on the unfortunate tree-boy, but she promises he won’t feel a thing. “Just a little tickle.” This seems to be true as when she begins to slice him up he just starts giggling.