Fossils are the traces left by organisms – if they happen to die in just the right time and just the right place. If the conditions are correct the organic structures are replaced by minerals that can last hundreds of millions of years. Fossils are our best way of understanding ancient life but often scientists have to make do with mere fragments of bone that can be hard to interpret.

In exceptional cases a whole animal is preserved and sometimes it is tells us a great deal about how the organism lived. Here are ten fossils that capture a snapshot of the primordial world.

10 A Snake Hunts a Dinosaur 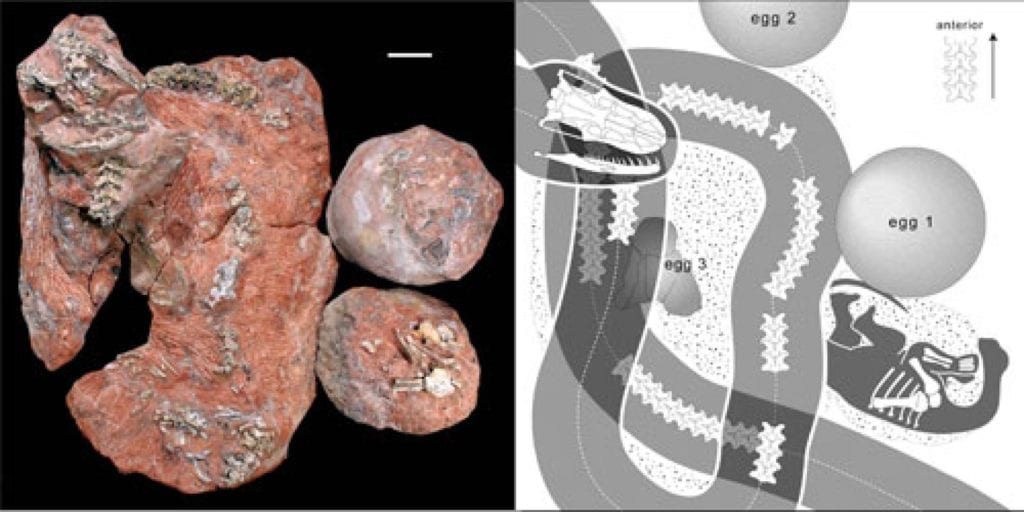 In popular imagination dinosaurs were the undisputed masters of their world. Yet the dinosaurs shared their planet with creatures that would, if they got the chance, take a bite out of those terrible lizards. In one case it seems that a snake decided to raid a dinosaur nest for its meal.

Sanajeh indicus was a species of snake that lived around 67-million years ago. When the remains of this 3.5m long snake were discovered it was found beside a clutch of dinosaur eggs. Sometimes it happens that dead animals will be washed together by a flash flood and be preserved next to each other by chance. In this case though the coils of the snake show it died suddenly inside the nest. Most telling of all were the remains of newly hatched sauropod dinosaur. While sauropod dinosaurs grew up to be vast creatures this individual was still tiny, and vulnerable to snake attack.

Other fossils found nearby show other Sanajeh snakes wrapped around other eggs so this was not a one off example of snakes snacking on baby dinosaurs.[1] 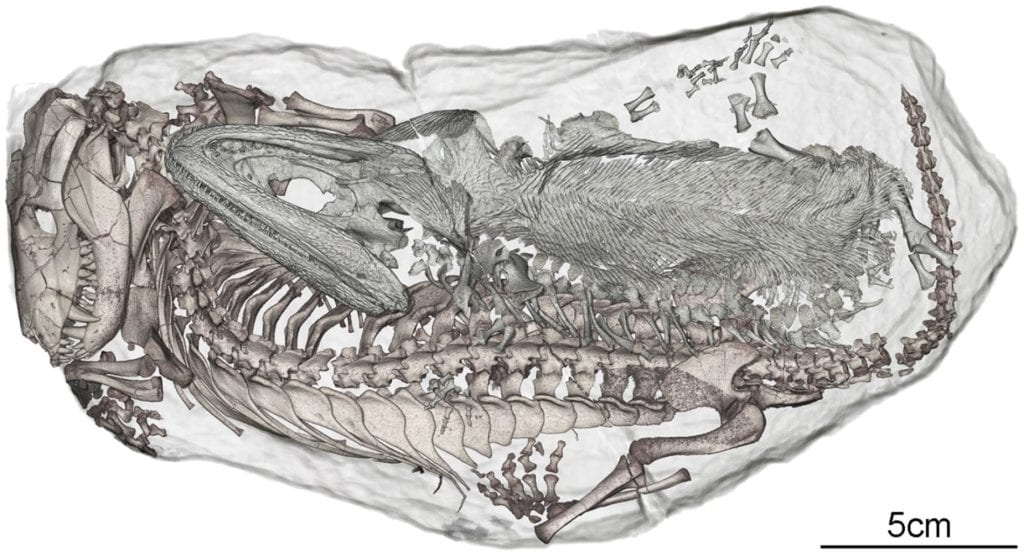 250-million years after it was filled with mud the fossil of a small burrow was discovered by a palaeontologist. Even as a fossil just of a burrow from that long ago it would be interesting but when it was examined it was found to have not just one occupant, but two.

The first animal spotted inside the burrow was a proto-mammal called Thrinaxodon that is thought to have created the hole. But right next to it was an amphibian called Broomistega. Since Broomistega is precisely the sort of animal that the carnivorous Thrinaxodon would have hunted the two make for unlikely bunk mates.

Scientists who examined the specimen considered various scenarios to explain how the two ended up together. Key to understanding what happened were the injuries on the amphibian. Two bite marks on the top of the head showed it had been attacked, but the bite marks do not match the Thrinaxodon. Researchers believe that Thrinaxodon was probably asleep, or in a state of torpor, when an injured Broomistega dragged itself into the burrow for safety or to escape the sun.

Unfortunately both the burrow’s inhabitants were caught in a muddy slurry when a flash flood buried them alive.[2] 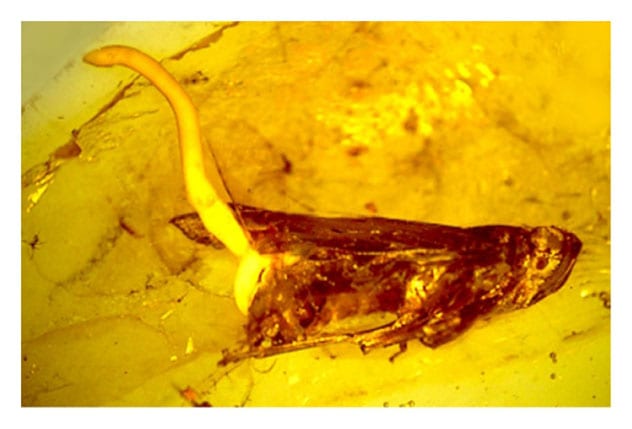 Parasites are amazing, if unnerving, creatures. Instead of the hassle of finding their own food they are perfectly adapted to steal from other creatures. Sometimes they move inside of their hosts to get both access to nutrients and security. You might think that it is unlikely then that we would have any fossil evidence of these subtle creatures but amber is teeming with traces of parasitism.

Sometimes when you kill an insect you may witness a horrifying event. While you have rid yourself of one creepy-crawly another suddenly emerges. When a parasitic nematode senses that its host is dying it will often struggle free. A bizarrely long worm can unfold itself from a dying insect – and this can actually be seen in ancient amber.

When a little planthopper bug found itself struggling in thick tree sap its life was pretty much over. What the planthooper didn’t know was that more than one life was at stake. As the planthooper died a worm that had been filling almost its entire body cavity began to escape. Unfortunately for the parasite it was no more able to escape the sap than its host. Both were preserved for 35-million years.[3]

The fossil record is full of track marks left by creatures as they wandered around in the mud. Sometimes these are large footprints of dinosaurs that recorded stampedes and sometimes they are the tiny paths worms leave as they wriggle about. Sometimes the tracks record the last moments of an animal’s life and are known as Mortichnia – Death Marches.

For one horseshoe crab we know exactly how it died because we have a 9.7m track of its last steps and the remains of the animal itself. Around 150-million years ago this young horseshoe stumbled into a lake with low oxygen levels. It fell on its back but managed to right itself and carry on its walk. It struggled of for several minutes before it was finally suffocated.

In the low oxygen water the horseshoe crab was quickly buried in mud that preserved the footprints it left in its attempts to escape the lake.[4] 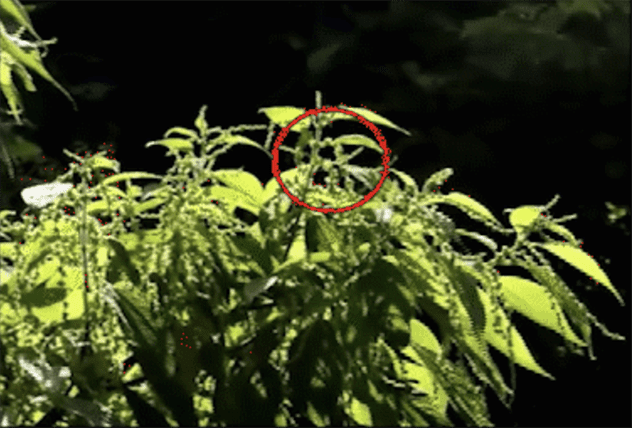 The situations that fossils preserve are often ones that persist for hours of days. Fossilised remains that are caught in amber can capture moments that only occur for seconds. Or in the case of one pollen sneeze by a plant a moment that lasted just one tenth of a second.

Usually when we think of pollen and sneezes we are imagining the allergic reaction pollen can cause us. But some plants when they release their pollen do it in short and sudden burst to make sure it spreads. In 20-million year old amber researchers discovered an extinct plant they named Ekrixanthera, meaning “explosive anther,” in the act of shooting off its load of pollen.

The plants had evolved to release their pollen into the air during short dry periods in the tropical forests where they lived. The drying of the plants puts their reproductive organs under tension that causes them to explode and release their pollen. It was this explosive sexual moment that was caught in the amber.[5] 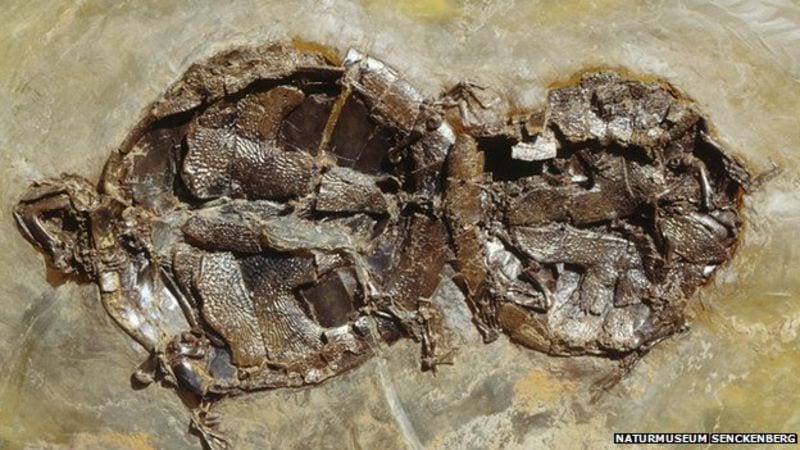 It is not just relatively passive plant sex that has been caught in fossils. For two unlucky turtles the moment of their orgasm was more than just a “little death” – it was the real thing. It seems the turtles were pretty extreme creatures. They chose to breed while swimming in a volcanic lake.

Several turtles in male-female pairs were found in sediment from 47-million years ago. They appear to have been caught in the act of love based on the way they were preserved. The pairs were found with their rear ends together and their tales in the position used by modern turtles. Before studies had identified the male and female individuals in the pairs some had speculated that the turtles might have died in some form of combat.

The lake where the turtles lived was likely saturated with toxic gases released by volcanic activity. If the mating pairs descended from the oxygen-rich upper layers they would have been poisoned by the waters below because some turtles have skin that allows gases to be exchanged with the water they are swimming in.[6] 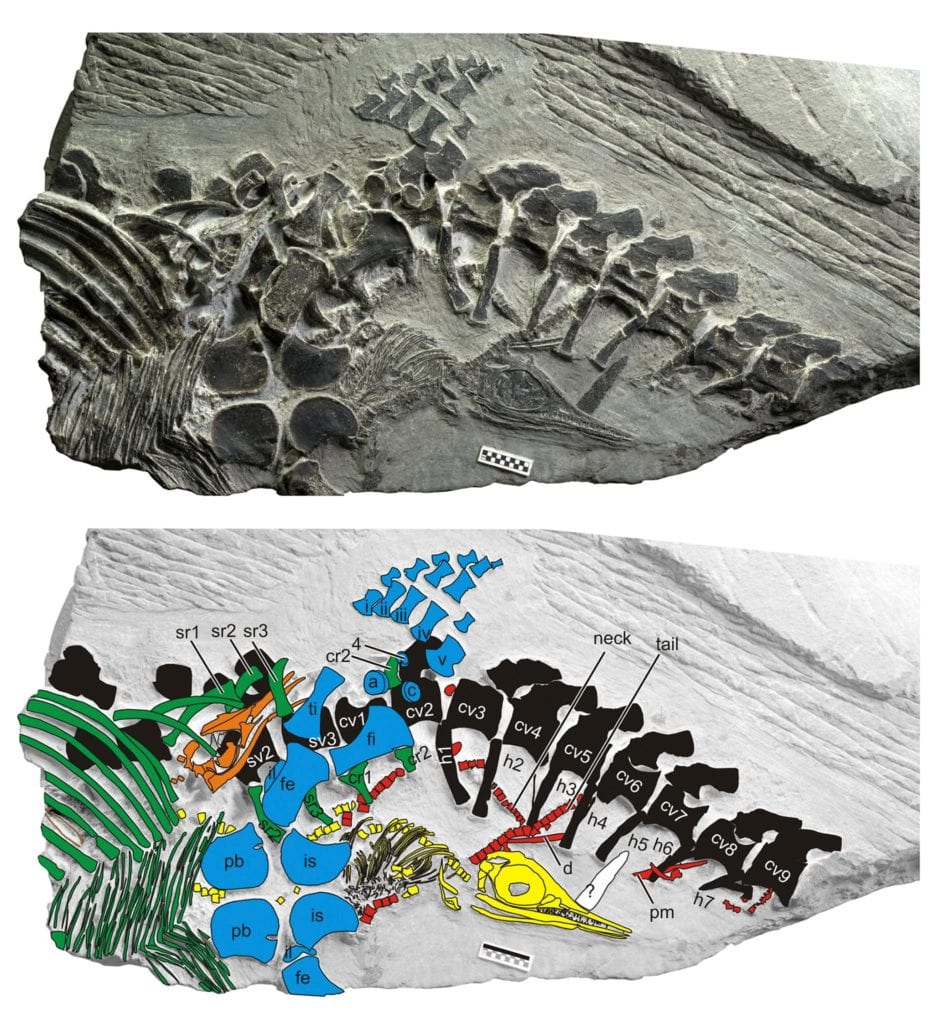 After sex comes the moment of birth. This can be a dangerous moment for creatures and so there are plenty of fossils which record unfortunate mothers who died in the act of giving birth. Sometimes these fossils can reveal a great deal about the lives of these creatures from their birth to their death.

Ichthyosaurs were sea reptiles that were major predators in ancient seas from around 250 to 90-million years ago. Many fossils have been found of various ichthyosaur mothers with their young inside them and just after birth. Most of these show the young leaving their mother tail-first which suggests they were born at sea. One early ichthyosaur called Chaohusaurus that lived 250-million years ago was found giving birth to young who emerged head first.

Since head first birth is only found in land animals this suggests that the first ichthyosaurs crawled onto land to give birth. This would be an intermediate step as ichthyosaurs evolved to be creatures that lived fully at sea.[7] 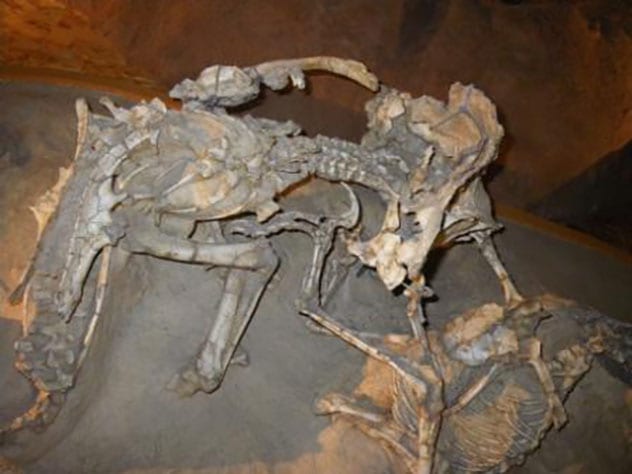 Velociraptors were not quite the threat they appear to be in Jurassic Park. For a start they were roughly the size of a turkey so unlikely to have hunted down humans, had any been around. But they were still superb killing machines with large claws on their feet. For one Protoceratops in ancient Mongolia its meeting with a velociraptor was deadly – for everyone involved.

The skeletons of both the Velociraptor and Protoceratops still locked in battle were discovered 74-million years later. The Velociraptor has its vicious claw jammed into the throat of its prey in what would probably have been a lethal attack. But the fight was not going all the predator’s way. The Protoceratops appears to have bitten the arm of its attacker with such force that it shattered the Velociraptor’s bones.

The two animals are preserved in 3D and not flat as if they collapsed to the ground after killing each other. The most likely scenario is that in the throws of their final battle the dinosaurs caused a sand dune to collapse on top of them. This held them in place over millions of years and preserved them in the midst of their struggle.[8] 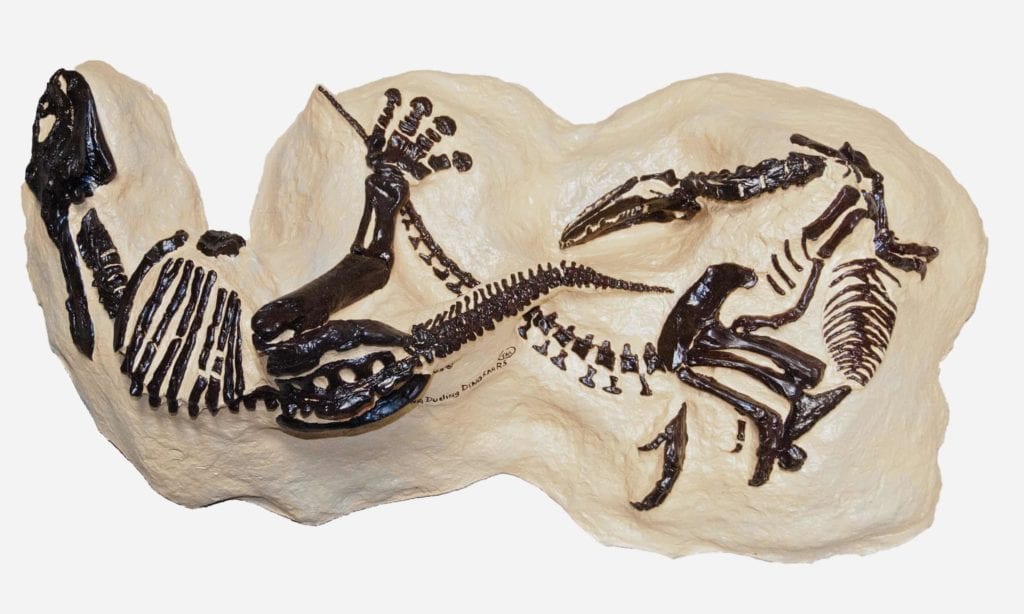 If you asked people to name famous dinosaurs then two names that would probably come out top are T. rex and Triceratops. To find one would be the highlight of most palaeontologists’ lives. To find both would be extraordinary. To find both locked together in combat is almost inconceivable, but that is what seems to have happened on a Montana Ranch.

While out looking for fossils on the ranch the pelvis of the Triceratops was found but was almost left there as it was in an inaccessible location. Only the fact that it seemed to be next to a leg bone, suggesting a more complete skeleton, drew the diggers back. When they excavated the Triceratops they spotted a clawed foot nearby. A foot belonging to a therapod carnivorous dinosaur.

Once removed from the site and cleaned up it was clear that both animals had been fighting each other. The Triceratops had the teeth of the predator still stuck in its teeth. The predator, which may be a juvenile T. rex, had its skull split open as if it had been kicked hard by its prey.[9]

1 The Moment the Dinosaurs Died 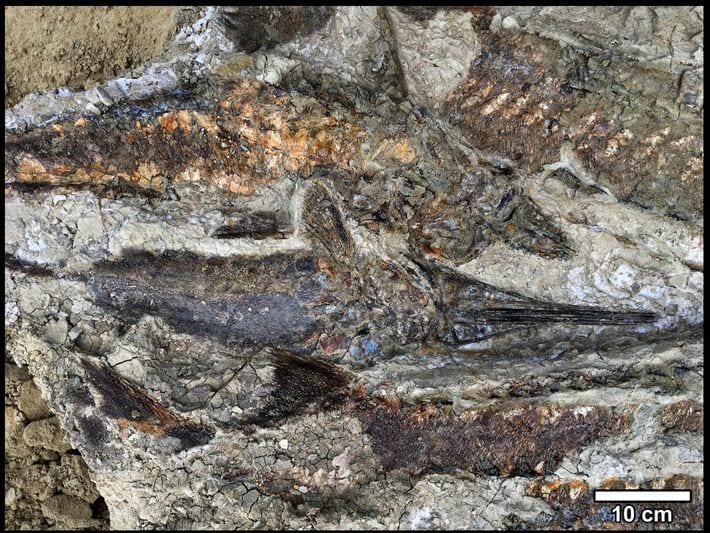 The mass extinction which wiped the dinosaurs from the Earth has long been mysterious. It was only with the painstaking bringing together of evidence from across the globe that a consensus has been reached that the dinosaurs were killed when an asteroid struck the Earth. Much of this evidence is complex and technical but new research may have captured direct fossil evidence of the very day the world ended for the dinosaurs.

In North Dakota at the Hell Creek formation a whole ecosystem has been discovered with signs of how it was destroyed. When the asteroid struck the Earth it sent up huge plumes of molten rock and dust into the atmosphere. The particles thrown into the sky turned to tiny pieces of glass called tektites that rained back down. At the Hell Creek site these tektites have been found embedded in amber, and even in the holes they made as they struck mud.

Earthquakes and tsunamis crossed the planet. At this site masses of fish flung onto the land by massive waves have been discovered. The gills of the fish still contain the debris thrown up by the asteroid impact.

More work needs to be done at Hell Creek but it seems like the destruction of the dinosaurs is suddenly a lot clearer.[10]