Unbeknownst to most people the Board Game industry has been thriving and booming for the past twenty plus years. Thousands of new games are released every year from hundreds of companies. Many people only know the mass market staples found at big box stores, and while these still have their place there are countless new options at hobby, book, and online stores.

While most of these are family-friendly and non-controversial, there are exceptions. The following are some of the most bizarre, wild, or plain offensive games to have ever been released. Many of these are still available to purchase today, while some are so rare many collectors have never even seen an actual copy. 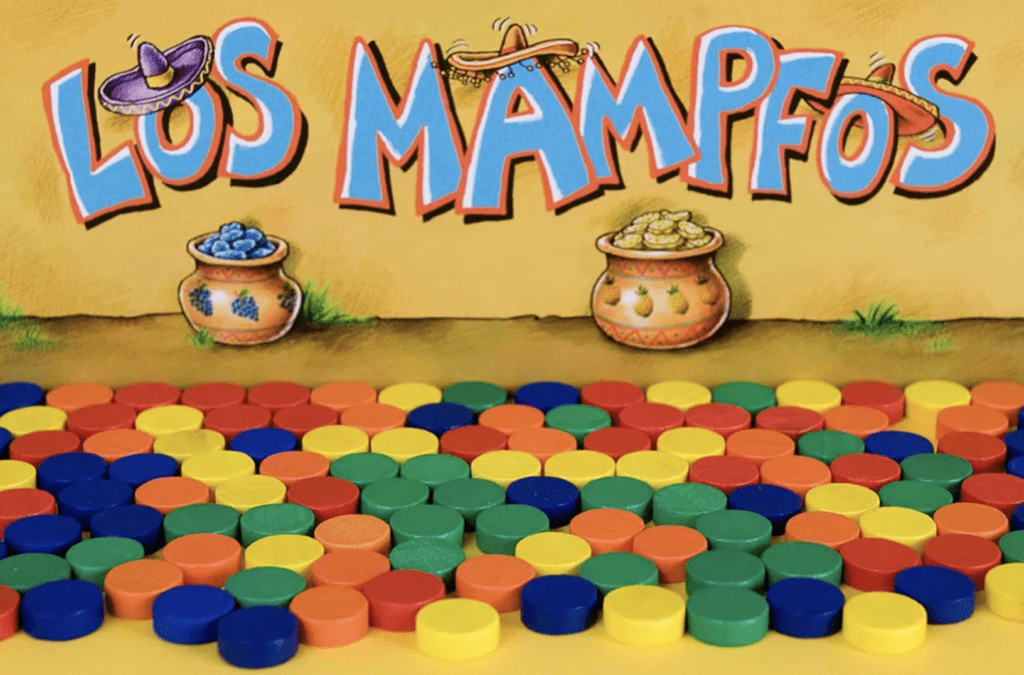 This is perhaps the most well-known game on this list, however that does not make it any less bizarre. In 2006 the French publisher Gigamic released Los Mampfos, designed by the award-winning German game designer Rüdiger Dorn and Maya Dorn. In this game three large wooden donkeys are placed on a circular track, using cards the donkeys move around and are “fed” small wooden disks in 5 colors. When scoring happens players try to guess which colors the donkey ate the most of, the tail is then lifted, and the donkey releases the disks. Players then collect the poo of the color they guessed. This game went on to be nominated for several awards including the coveted Spiel des Jahres Kinderspiel, The German Children’s game of the year.[1] 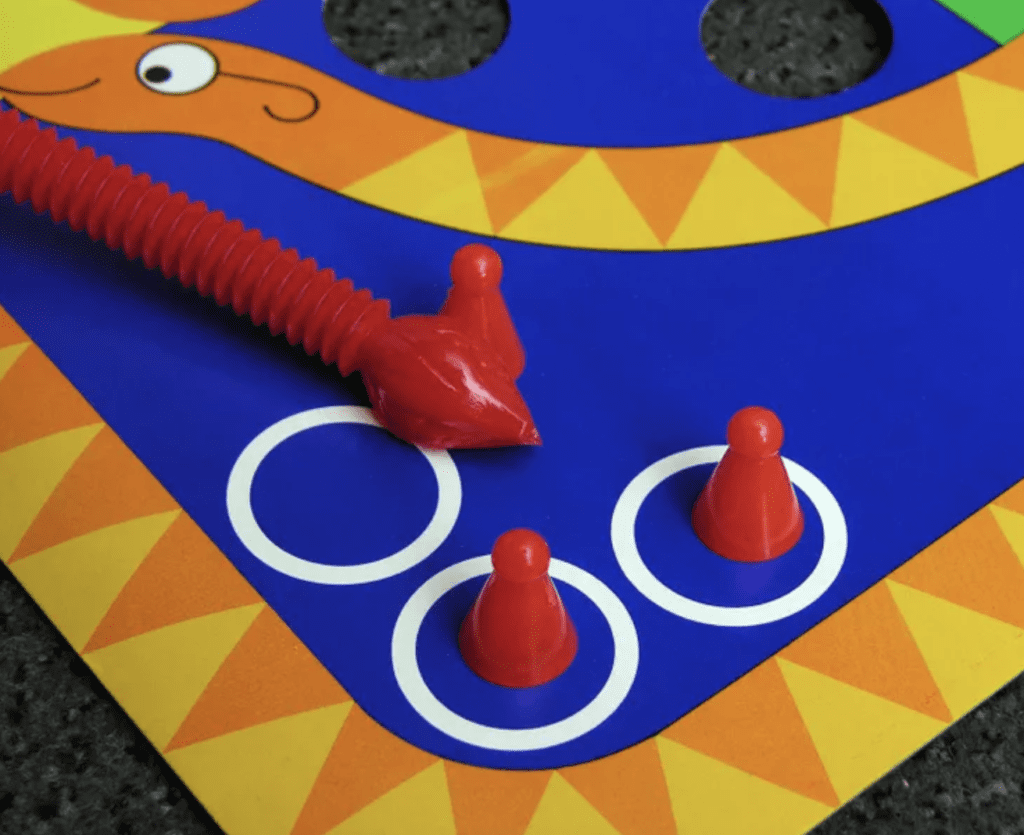 Back in 1975 the Canadian company Action Games and Toys released this wacky dexterity game. The designer is uncredited, but whoever created this no doubt was a fun individual. When playing this game, you may not use your hands, instead you wear a pair of plastic glasses with a long flexible snake attached at your nose. The board is raised and has several holes in it. Each player has three cones which the must push into the holes. As you can imagine the flexible snake makes this exceptionally difficult. The first person to complete this task is the winner. While this is not intended to be a drinking game it seems that it would fit that criteria perfectly. Do not pass up this crazy game if you happen upon one in second-hand store.[2] 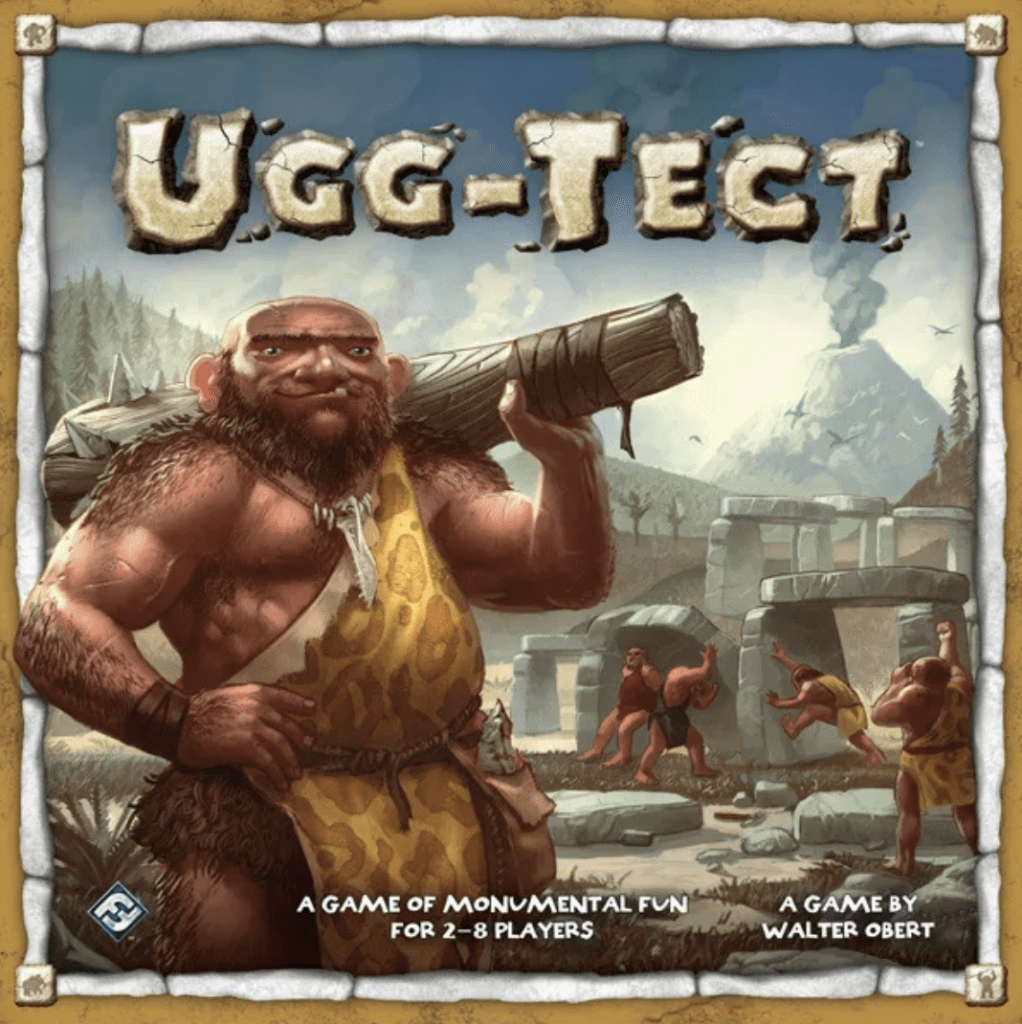 This is another less obscure game, released in 2009 from several different publishers, including Fantasy Flight, one of the largest game companies in the world. Designed by well-known Italian designer Walter Obert. This game features 2 inflatable clubs, which are used to “communicate” with your teammate. In this game you are playing as a caveman, and you may only speak in primitive sounds. One player is the architect they examine a simple structure built with colored blocks of different shapes. The rest of your team attempts to build this with your non-verbal instructions. Raise your hands, stomp your feet and yell at your team in gibberish to instruct them how to build this. Using the inflatable club, whack them on the head, once to indicate they did something correct and twice to tell them they are wrong. A loud and boisterous this one is a lot of fun to play.[3] 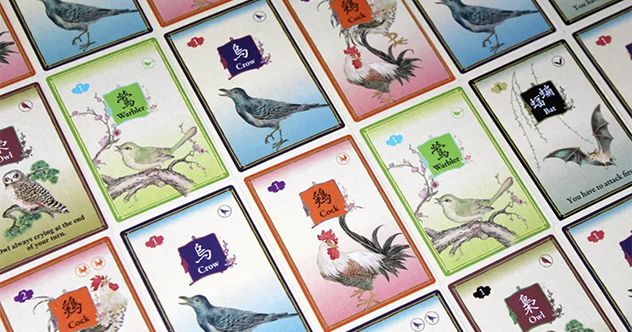 The most recent game on our list is this title from 2014. A Japanese game from designer Roy Nambu. The original title of this game translates as “I would kill all the crows in the world to sleep with you in the morning”. This refers to a song sang in the red-light district of Japan in the 1800’s. In the game players are happily enjoying the company of geisha’s in the red-light district, and they do not wish to leave. Players are eliminated one at a time and the player who manages to stay the longest is the winner. The crows are how one gets found out. If a crow lands at your window and calls out, you are caught and must leave. By playing cards you must kill the crows arriving at your windowsill or move them for your opponents to deal with. This is a ruthless and mean game, all in the name of staying in your lover’s arms just a bit longer.[4] 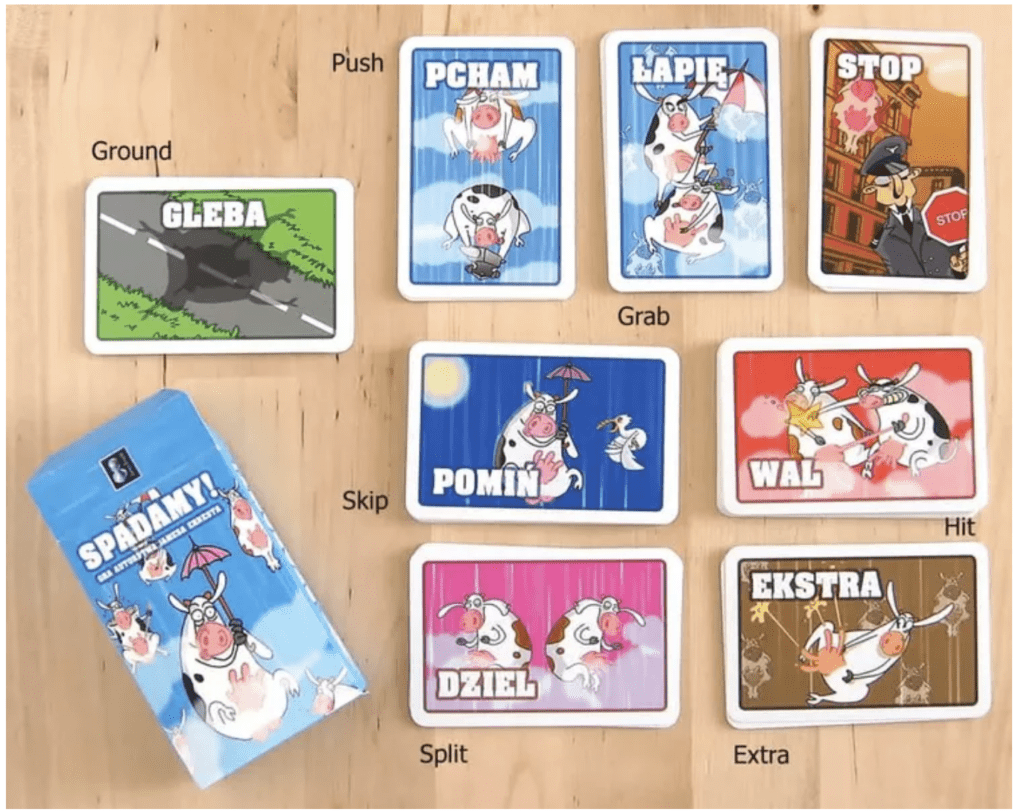 This game first appeared in 1998 where it was well known among hobby gamers. Cheapass games was a staple company in the late 90’s and designer James Earnest has always been a prolific name in the industry. The premise of Falling is simple, everyone is falling to their eventual death, the goal of the game is not to live, but to hit the ground last. One person is the dealer and not playing the game for the current round. The dealer passes cards out in real time to all players, controlling the speed of the game. Just like if you were falling, there are no turns in the game. Cards do a variety of things to speed up and slow down the game. It is a frantic game that can be played in a minute or so. It is not as unusual as many of the games on this list, but it still deserves a place for the morbid theme.[5]

5 Kittens in a Blender 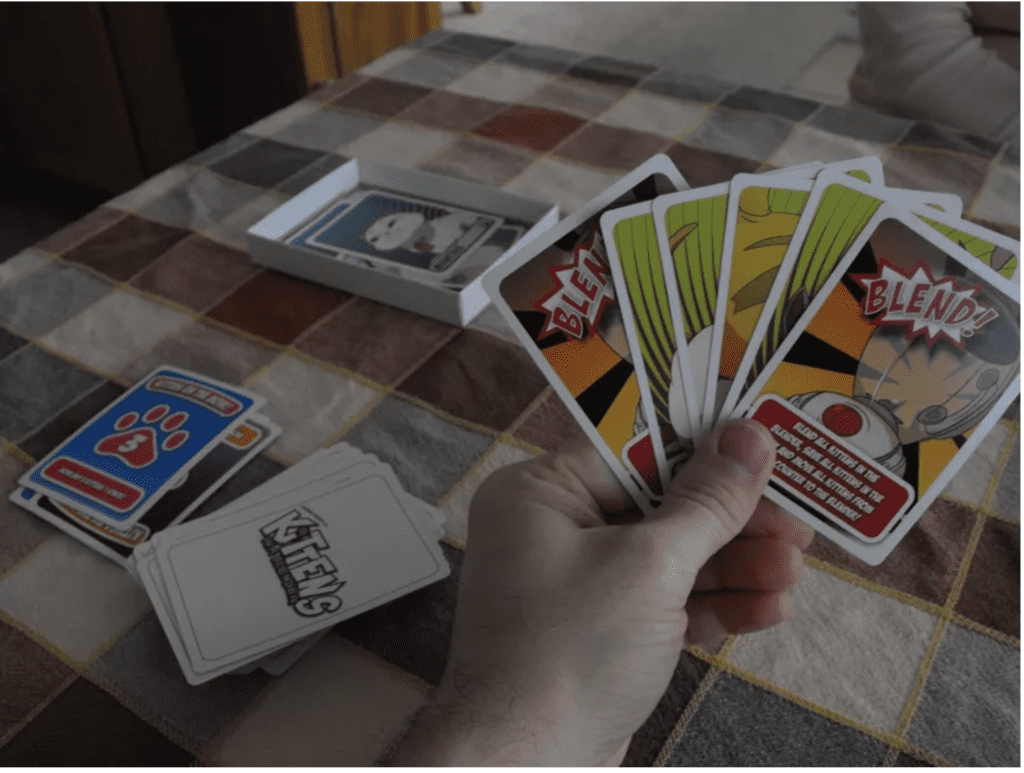 The title says it all and puts a disturbing picture in your mind. This twisted game was released in 2011 from a small company know as Closet Nerd games. It was designed and published by the Knudson brothers. The premise of this card game is simple, save your curious kittens from suffering a terrible fate in the randomly churning blender. You score points for saving as many kittens as you can, but also lose points for kitten smoothie you create. Lighthearted artwork saves this game from being too dark, and a portion of the sales were donated to a no-kill shelter. So, play it with your crazy friends, but maybe do not introduce this one to Grandma.[6] 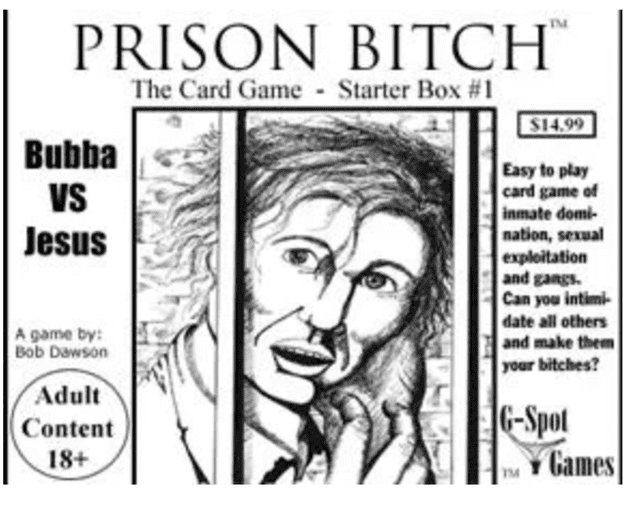 Yep, you already know where this one is going. The struggle of existence in a male prison. This is, of course meant to be a humorous, satirical game. This was a self-published effort, back in 2003, not many copies were produced or sold, as the game was banned from the Origins game fair that same year. This is again a card game, where you are fighting for superiority and reputation among the other prisoners. Recruit bitches and hire thugs to attack the others and defeat the other players by discrediting them and reducing their rep to zero. A fun romp through the life of a prisoner, no word if the designers had any real-life experience or technical advisors.[7]

3 Serial Killer: The Board Game 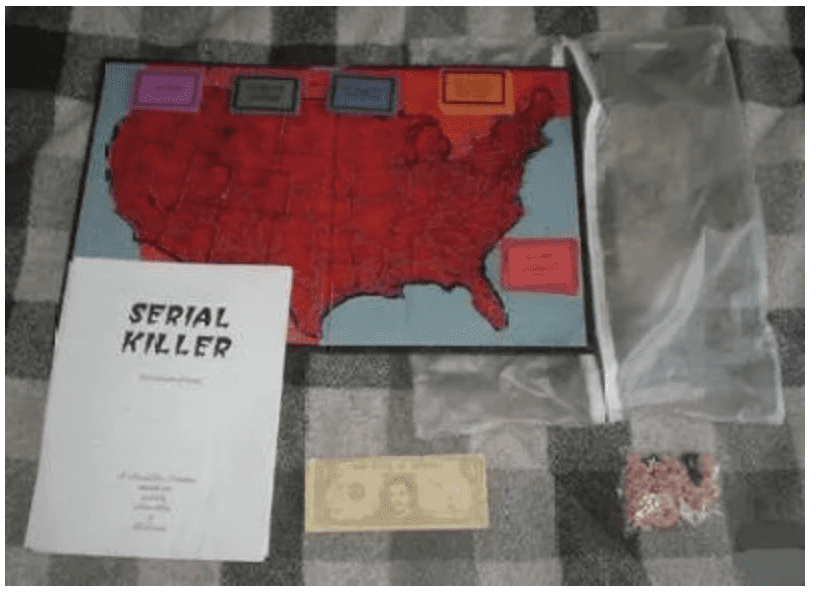 Banned in Canada, now it is getting serious. This obscure game from 1991, is nearly impossible to find. It is packaged in a body bag and contains a plethora of little body tokens. Simply travel around the map of the US and kill everyone you can. The goal of the game? When you finally get caught, try to make sure it is in a state without the death penalty. Perhaps the age of this one and the fact that is a board game makes this more taboo. Either way it is a grim theme to play a game about, however still tame compared to some video games.[8] 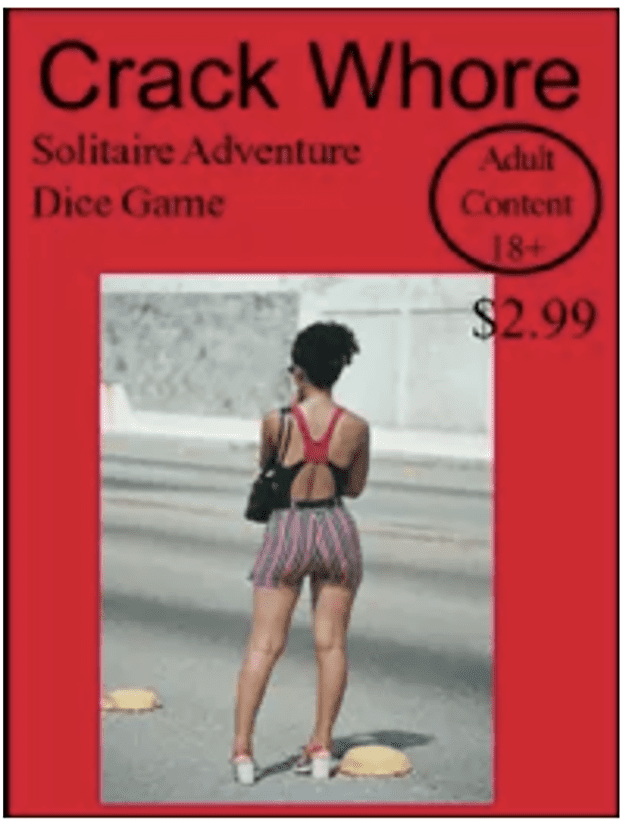 Ah, a nice relaxing solitaire dice game. For everyone who has dreamed of being a prostitute and trying to escape life on the street, thanks to this entry from 2003 you can simulate this. Unfortunately, to escape the life you need to earn money, so to escape the streets you must first work the streets. Set aside your morals and ethics and start saving up. You will have to deal with Pimps of course, they probably will want a cut. Do not do too many drugs and watch out for the serial killers that like to prey on street workers. Oh yeah, those pesky diseases could also hamper your work, hopefully you can stay clean. Something tells me this would be a successful App game.[9] 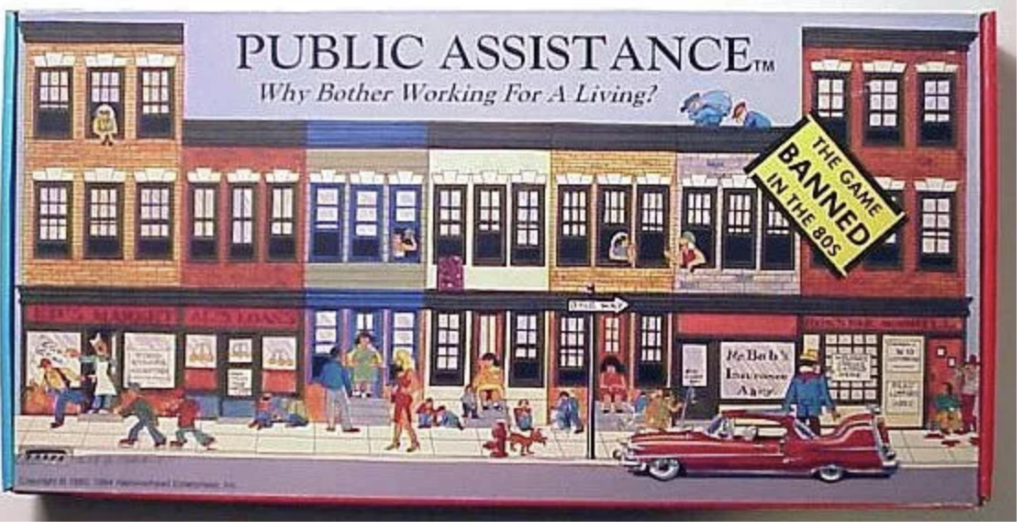 We go back to 1980 for our final entry, this is a game of earning money, though not necessarily working for it. In fact, the tagline is “Why bother working for a living” This is game is very politically incorrect mockery of the welfare system. As you roll dice and move around the track you collect your welfare payments and try to avoid the working mans burden. The burden of course being bills and taxes. This was released more as a pollical statement than a game, so there are no real decisions to be made. This game was banned in some places as well, but you should be able to seek out a copy if you want to experience it for yourself, I hear it is quite entertaining at a party.[10]