It’s no surprise that strange video games have hit the market in the past, but some of them are just downright bizarre. From the insane graphics to the unbelievable concepts, there are some weird games that are complicated to describe.

They span the time frame of video game creation—from the earliest days to modern times. A plumber who powers up with mushrooms while trying to save a princess is nothing compared to these odd ones.

Kids have all sorts of fears that they hope will never become a reality. This game starts off with one of those possible fears—being flushed down the toilet. Toilet Kids is a poo-filled humorous game that starts out with a kid waking up in the middle of the night to take a dump.

While he sits on the commode, the kid’s nightmare becomes a reality. He falls into the toilet, and the shoot ’em up game instantly begins at this point.

The kid begins flying around on some sort of a duck-shaped toilet shooting at poop-related objects. He must fight off attacks of monkeys, spiders, flies, and other animals that are flinging turds his way.

The game features four stages with different themes and bosses that must be defeated. Toilet Kids, released in 1992 exclusively for PC Engine, is full of pixelated keisters, turds, and toilet humor that makes up one weird game.[1]

Sneak ‘n Peek is simply a computerized version of hide-and-seek. Released in 1982, this Atari game could be played by two players or one player against the computer. One player would cover his eyes while the other found a hiding spot. Once the second person was hidden, the first had a limited amount of time to find the concealed player. When that person was found, the roles would be reversed.

The game is played in an old home with a yard and three rooms. There aren’t many hiding spots, and some of them are a bit strange. Sneak ‘n Peek can be played with fixed hiding places or variable hiding spots that will be moved each time someone enters the room. There are also two levels of difficulty to test.[2]

It’s probably more enjoyable to just go outside and play the real version of this game.

Some video games are absurd but hilarious to watch. Muscle March is one of those games. You play as one of a group of seven bodybuilders—five men, one woman, and a polar bear (yes, a polar bear)—chasing down various thieves who have stolen their protein powder. It’s already funny just thinking about it, right?

Muscle March was released on WiiWare, making it an interactive game to be used with the Wii remote and nunchuk. Your bodybuilder lines up behind three others as they chase the thief through the city.

The thief will bust through walls, and it is the player’s responsibility to make the same pose through the wall as the thief in order to continue pursuit through that hole. The other players in front of you will slowly drop out, leaving just you chasing the protein-stealing bandit.[3]

The gameplay will speed up at this point for added difficulty. If you successfully copy the thief’s holes, you will have the opportunity to tackle the bandit and recover the coveted protein! 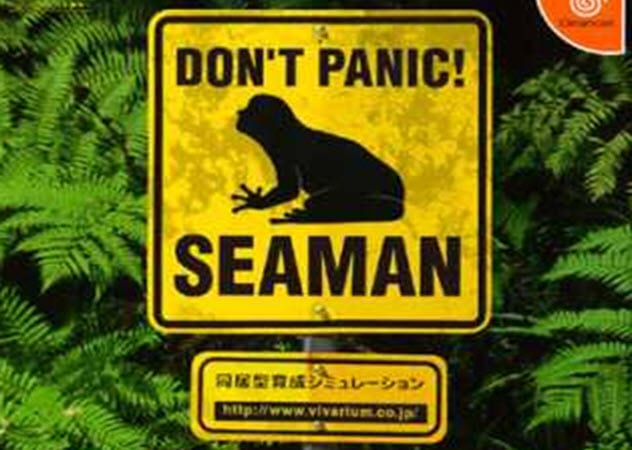 The virtual pet toy fad was popular in the ’90s and featured handheld games such as Giga Pets and Tamagotchi. There was a much less popular game about virtual pet raising that also hit the market toward the end of the fad.

Seaman was released on Sega Dreamcast in 1999, and a Playstation 2 version was released in 2001 in Japan only. The goal of the game is to keep Seaman, an anthropomorphic fish with a human face, alive by interacting with its environment in different ways.

The creepy fish eventually starts talking, which is voiced by Leonard Nimoy in the English version. Players have to properly take care of Seaman’s tank, grow larvae in a different tank, and feed Seaman to keep him alive.[4]

The game also required players to use Dreamcast’s microphone peripheral to answer questions asked by Seaman. After a short time of playing, though, Seaman will become bored and tell the user to “go away.” The creator of the game has hinted at a sequel, but no return has hit the market. 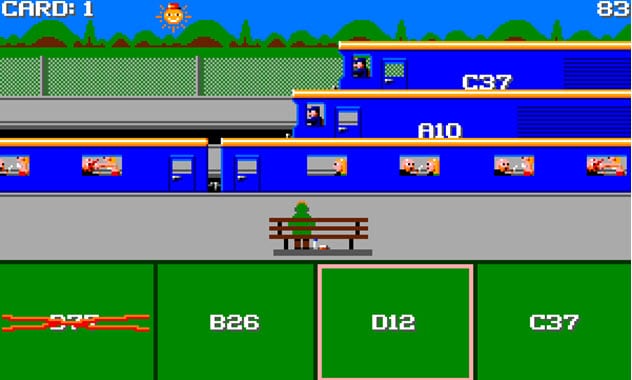 Trainspotting is known as the activity of watching trains and writing down the railway engine’s numbers. It is a hobby that has been enjoyed by people in the United Kingdom dating back to World War II. The hobby is best enjoyed in person, but you also have the option of engaging in it without leaving the comfort of your home.

Sensible Train-Spotting was a simulation game released in 1995 for the Amiga console. A man with a thermos sits on a bench as several trains pass. You must spot the numbers on the trains as they roll by and match them to the numbers you already have.[5]

That’s it—it’s that simple. The difficulty does increase as you progress through the game, but do you ever really win at a game like this?

Sega released video games for the Genesis and arcades under the name of Michael Jackson’s Moonwalker. Looking back, it was made up of some fairly strange and creepy concepts. In the game, Michael has to rescue children that were kidnapped by Mr. Big. He uses Bubbles the chimp, moonwalking, and dancing to take down the bad guys.

It gets creepier: When Michael touches the children, it charges up his health. There is even a button to perform the famous crotch grab, although it serves no actual purpose in the game.

When he dances, it makes his enemies break out in a rhythmic dance routine before they die. The game is rather controversial, but you do get to jam out to some of his top hits while playing.[6] 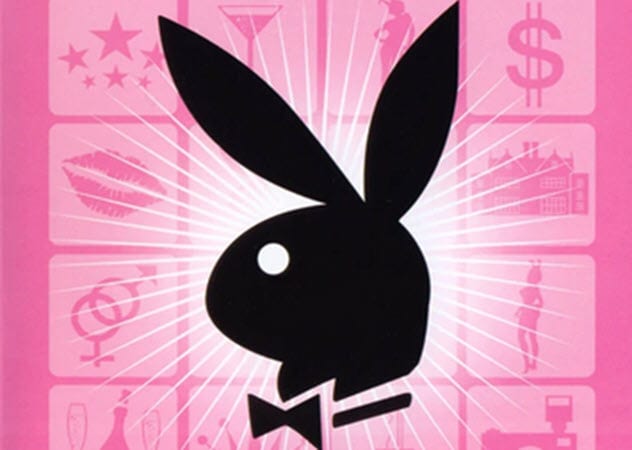 Well, you get to play him in Playboy: The Mansion . . . sort of. This game from 2005 blends social simulation with role-playing and empire building, which is similar to The Sims. The goal of the game is to build the Playboy mansion and magazine into a powerful brand.

You hire and fire journalists and photographers along with lining up photo shoots and interviews for the magazine. The quality of each component of the magazine is based on how well each person likes Hef.[7]

Photo shoots and interviews are also only as good as the relationships those people have with Hef. The whole game really depends on how well everyone likes Hef. It’s a strange model for a game, especially coming from a company like Playboy. 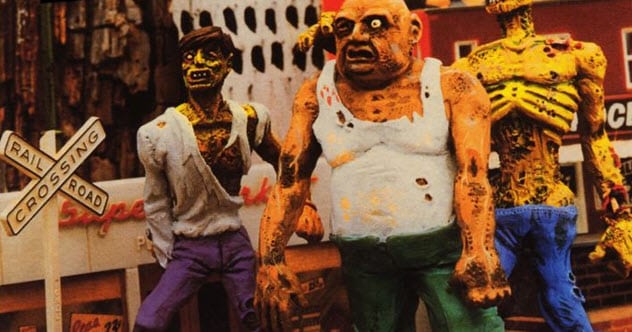 In 1999, a mysterious meteorite that crashes into the Nevada desert turns out to be Darc Seed, an evil alien with horrible powers. That’s how Samurai Zombie Nation for NES starts out, but that is only the beginning.

Darc Seed shoots magnetic rays that turn the people of America into zombies and bring the Statue of Liberty to life for his own benefit. He also gained possession of his most deadly weapon, the legendary samurai sword Shura. The great head of the samurai, Namakubi, heard about the sword falling into the wrong hands, and he sets out for the United States to defeat Darc Seed.

Namakubi has a massive head, which is why he is known as the “great head of the samurai.” He is able to shoot projectiles from his eyes and acid spit from his mouth. He also eats zombie corpses for extra points and health.[8]

This oddly satisfying game is played over four stages with two difficulty levels. Give this strange game a try if you think you possess the strength and knowledge to reclaim the magical sword and free the Americans from evil. 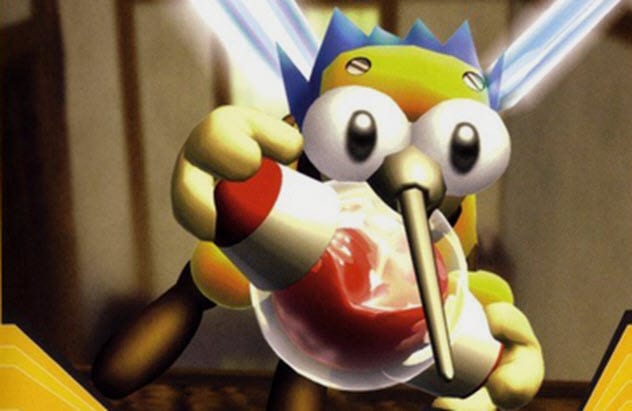 Ever wonder what it would be like to be a mosquito . . . well, wonder no more! Mister Mosquito puts you in the position of an adorable mosquito that must feed and store food and blood for the upcoming winter. To accomplish these tasks, you must terrorize the Yamada family who is trying to enjoy their traditional summer break at their vacation home.[9]

The game is shown from a third-person perspective as you work to suck blood from the family. You have to be careful trying to extract the blood, though, because the family members can swat you dead.

The mosquito changes colors and size and looks cartoonishly cute, but it’s a strange concept for a game. Try not to let this game suck the blood out of you! 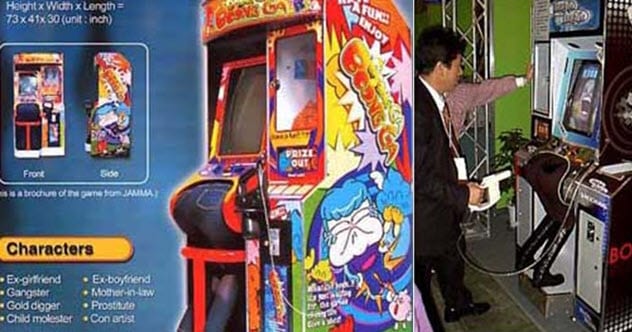 We’ve discussed some fairly strange games, but this is by far the craziest on the list. Boong Ga Boong Ga (aka Spank ‘Em), is an arcade game with a basic goal of punishing characters by spanking them. The game features a large screen, a fist with two fingers, and a butt with legs covered with clothes. The game was intended to make the player laugh and relieve some stress.

There are eight different players that you can punish, including the ex-girlfriend, gangster, gold digger, child molester, ex-boyfriend, mother-in-law, prostitute, and con artist. These characters can be punished by a traditional spanking or by using kancho, which is a prank where you poke a distracted person in the butt.

After the game is finished, a card is dispensed explaining the player’s sexual behavior. Small prizes can also be won if the score is high enough.[10]