The world is filled with police and paramilitary vehicles that are unbelievably fast, incredibly durable, or just straight-up weird. Among the vehicles listed are world record-holders, amphibious conveyances, and other assorted automobiles that you have to see to believe. However, as weird as some of them are, they could be the future of law enforcement and public security.

To solve the problems that our law enforcement agencies face on a daily basis, the originators of the following vehicles have come up with some innovative ideas (although some might be rather odd). This list will take you throughout the world because this much peculiarity can’t be found in just one country, let alone one continent. 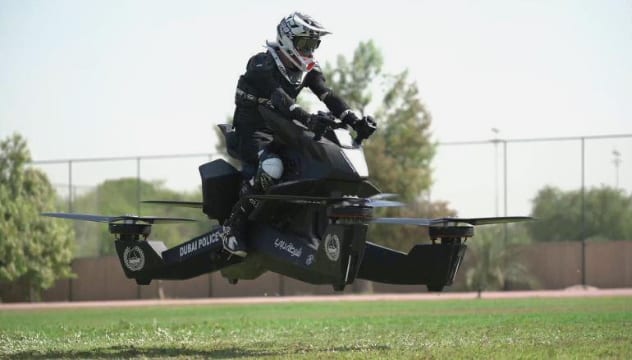 Dubai is home to some of the most exotic police vehicles in the world, but none quite exotic as police-operated hoverbikes. That’s right, by 2020, Dubai police are expected to be patrolling the streets with these eVTOLs (electric vertical takeoff and landing vehicles) produced by Hoversurf, a one-of-a-kind business whose goal is to solve the transportation problems faced by the world.

Hoversurf’s eVTOL can hover 5 meters (16 ft) off the ground and travel at a top speed of 100 kilometers per hour (60 mph).[1] These vehicles can fly for ten to 25 minutes with a pilot and for up to 40 minutes in “drone mode,” with no driver. Hoversurf also produces a hovercraft capable of carrying cargo and, in the law enforcement field, potentially convicts or other detainees. As advanced as this may all seem, Dubai isn’t the only one looking toward the future. Uber is working with NASA, the US Army, and aircraft companies to establish a flying vehicle network. 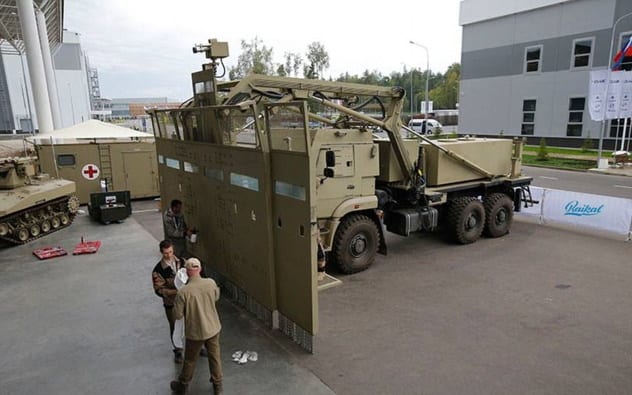 Kalashnikov has created a vehicle that is capable of dispersing crowds and protecting officers at the same time. The Shchit, or “Shield,” is quite literally a wall on wheels, featuring a 7-meter (24 ft) retractable wall capable of protecting 38 officers. In this case, “retractable” means that the wall has the ability to reduce its width to fit down narrow streets. Not only is the wall retractable, but it also has a water cannon, small holes for riot police to fire projectiles through, and a camera on the top that allows for vision from the driver cabin and potentially remote piloting.[2]

Kalashnikov’s plans don’t stop there. According to their CEO: “In addition to the ‘Shield’ complex, we are also working to introduce new design solutions for wheeled armored vehicles on the market both for the domestic market and for export supplies.” There isn’t a set date as to when we can expect to see this hit the streets, but when it does, it will be a sight to see. 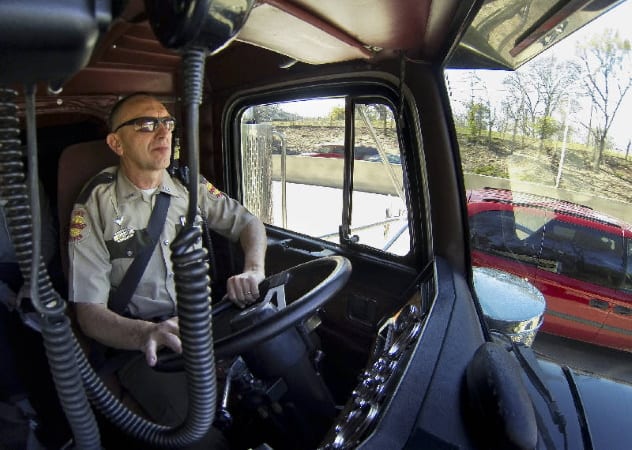 The highways of Tennessee are rampant with drunk drivers, people texting while driving, and unbuckled seat belts. To catch offenders in the act, the Tennessee Highway Patrol has employed the unorthodox method of using officers in unmarked semitrucks.

The force tasked with driving these unmarked vehicles consists of 97 officers who have a commercial driver’s license, which allows them to operate the 18-wheelers on the open road.[3] Don’t worry, though: You won’t be pulled over by a semi, as the officers only radio the offender’s vehicle description in for another policeman in a patrol vehicle to take care of. So, next time you’re tempted to break the law, be sure to check your mirrors for any officers in trucks. 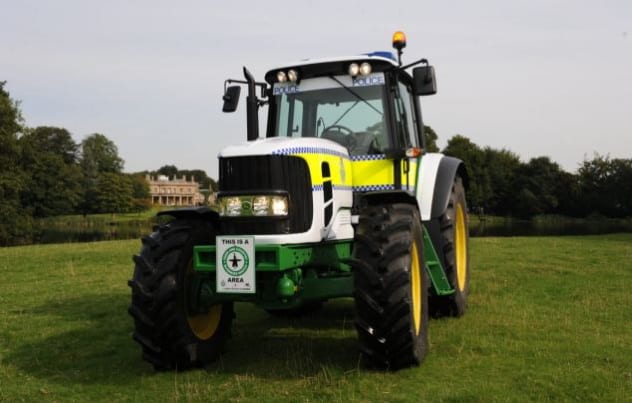 Across the pond, the UK is taking things a little slower, or rather a lot slower. With a top speed of 40 kilometers per hour (25 mph), please welcome a John Deere tractor. Specifically, it’s a John Deere 6630 that weighs 5 tons and costs around £50,000, hardly a pursuit vehicle. With its top speed in mind, its day-to-day functions would be rather passive, but should the need arise during severe flooding, it could be rather useful.

The main use of the tractor was for the Lincolnshire Police to show the initiative they were taking to put a stop to agricultural crime back in 2010.[4] When a tractor is stolen, the impact on the livelihood of the owner is immense. The hope was that the police tractor would encourage farmers to tag their tractors to prevent loss of property. 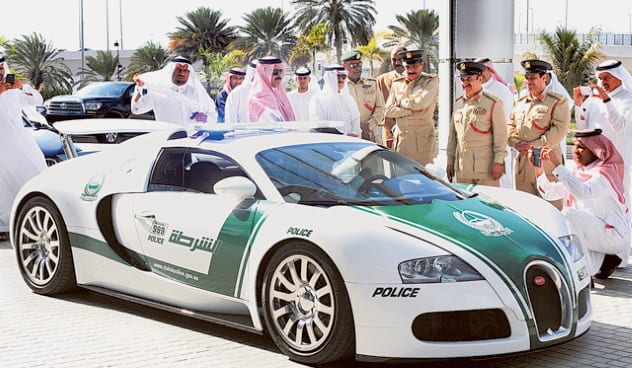 For the opposite end of the speed spectrum, we go back to Dubai to check out the world’s fastest police vehicle, their Bugatti Veyron. With a top speed of 407 kilometers per hour (253 mph) and a price tag of $1.7 million, this is definitely the flagship of the Dubai police force. As verified by Guinness World Records, Dubai now possesses the world’s fastest police vehicle in service. The previous record-holder was an Italian police force who set it with their Lamborghini Gallardo at 370 kilometers per hour (230 mph).

The Veyron isn’t the only supercar to join the ranks of the force; it’s merely one of the 14 exotic cars that Dubai is using to break down the wall between the police and the public.[5] Even though it has the capability to hit amazing speeds, it isn’t used as a pursuit vehicle. In fact, all it does is “patrol” tourist areas as a marketing tool. 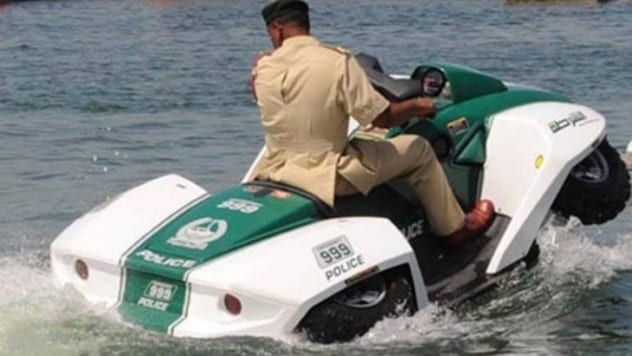 If hoverbikes and the world’s fastest police vehicle weren’t enough for you, then look no further than Dubai’s very own amphibious ATV. Produced by Gibbs, the Quadski can transform into its aquatic configuration in just five seconds and can reach a top speed of 72 kilometers per hour (45 mph), or 38.9 knots, on both land and water.[6] Under the hood, you can expect to find a BMW engine that has dual cooling and is capable of producing 140 horsepower.

For the base model, you can expect to pay $40,000, which is a rather modest price considering that Dubai has a Bugatti in its ranks. A two-seat version, the Quadski XL, is also available. Even though the Quadski can be outrun by other boats, the Dubai police have their own fleet of boats that can reach 144 kilometers per hour (90 mph) to back it up. 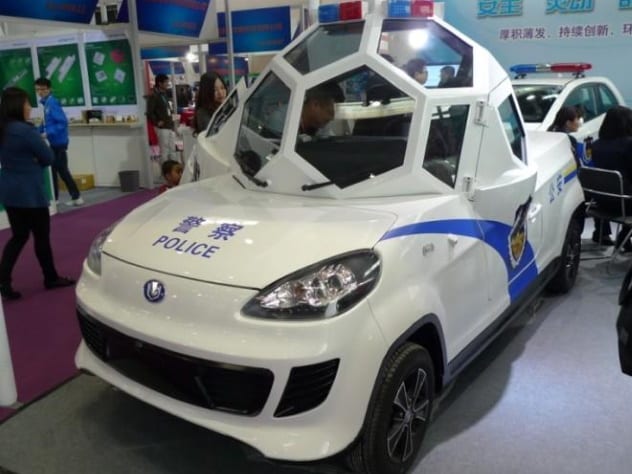 The Armored Spherical Cabin Electric Patrol Vehicle, manufactured by Zhijing Qingyuan, isn’t built for its looks but rather its protection capabilities. With Level-A armor (a standard set by the Chinese ministry of public security), this patrol car can withstand most pistol bullets. In addition to the bulletproof ride, it also allows for a 360-degree view of the surrounding environment. The peculiar patrol car also took a page out of Alfa Romeo’s book by using scissor doors.

Not only is the vehicle capable of withstanding gunfire to an extent, but it is also environmentally friendly, as it runs on an electric motor. It is capable of reaching 80 kilometers per hour (50 mph). As of a month after its unveiling in October 2014, no police forces had bought any of these odd-looking vehicles, though several were showing interest. 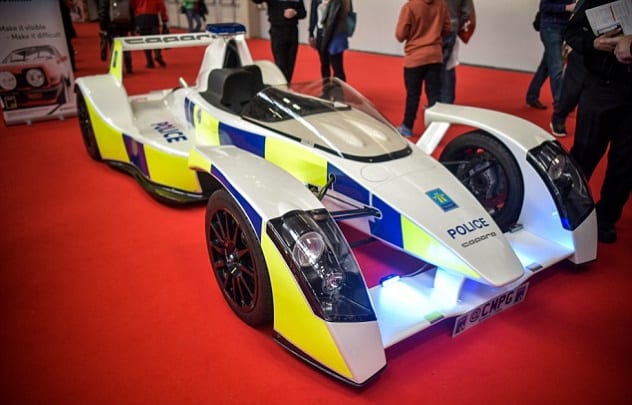 Unlike the tractor from earlier, this British police vehicle is capable of hitting speeds well over 40 kilometers per hour (25 mph). In 2015, a police Caparo T1 was unveiled in Birmingham. Weighing less than 500 kilograms (1,100 lb) this car looks like a Formula 1 racer and can go nearly as fast, with a top speed of more than 320 kilometers per hour (200 mph).[8]

Although it is more than capable of reaching high speeds, there were no plans to actually use it in day-to-day law enforcement operations, except in the most extreme crimes such as being a big meanie on Facebook or Twitter. Generally, it was to be showcased around the UK. 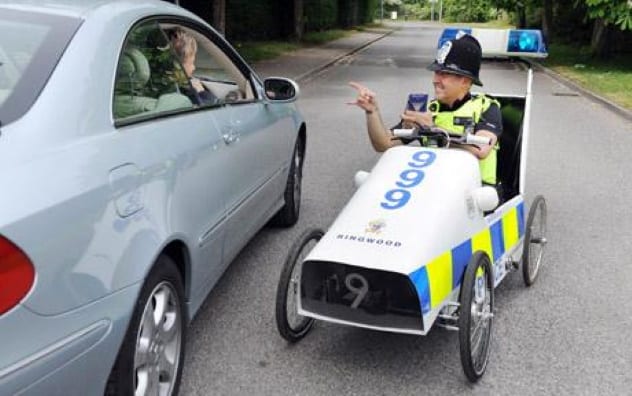 When you think of a police car, you probably think of a vehicle powered by a monster V8. The Hampshire Constabulary went in the opposite direction in 2010. In fact, they eliminated the whole engine aspect from their patrol car by using pedals rather than cylinders. With a max speed of 32 kilometers per hour (20 mph), this man-powered patrol car was built by an officer and students at Ringwood Comprehensive School and took an impressive 40 hours to complete.[9]

The pedal car’s purpose was to combat antisocial behavior by breaking down barriers between the police and the youth of the UK. Admittedly, even if Fred Flintstone was in this car, just about anything could outrun it, but it’s not about actually apprehending anyone. It’s about keeping the youth focused on productive things rather than antisocial behavior. Because of the pedal car’s blistering top speed, it was entered in that year’s British Pedal Car Grand Prix. 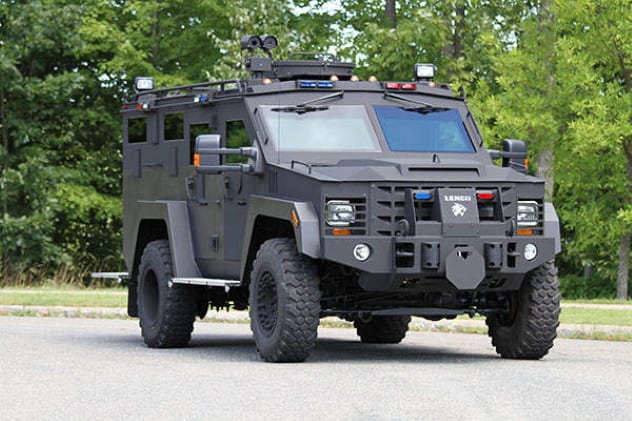 Every year, police officers in the US die during shoot-outs, arrests, and ambushes. Normal police cruisers just aren’t cutting it. That’s where the 8-ton Lenco BearCat G3 comes in, with a maximum capacity of ten officers and the ability to withstand .50-caliber bullets.[10] Taking its chassis from a Ford F-550, the BearCat can reach speeds of 130 kilometers per hour (80 mph), act as a battering ram, and, should the need arise, survive a chemical weapons attack. It also features a winch.

The BearCat isn’t all talk. In Tyler, Texas, in October 2010, a gunman unloaded his AK-47’s magazine at the police force’s brand-new BearCat, and not a single officer was harmed. The BearCat is an essential tool that is being deployed across all 50 states. Not only is it good on paper, but it also provides a psychological edge in a shoot-out or a pursuit simply due to its size. This monster SWAT vehicle crushes the tractor in weight and dominates the spherical pistol-proof car in its ability to withstand gunfire. The facts prove that the BearCat is indispensable for every SWAT team in the United States.