Have you ever considered how weird it is that humans have created a multi-billion dollar industry out of finely sliced, deep fried potatoes that often don’t taste like potato? The potato chip, and many other mass produced foodstuffs, can be whatever you want them to be nowadays; anyone who prefers ‘plain’, ‘vanilla’, ‘original’ or ‘ready salted’ as their flavour of choice are often seen as the single most boring person in the world. But when you have flavour options like those included in this list, maybe being boring isn’t such a bad thing after all…

One of the annoying things about sipping on this frothy Italian coffee is you’ll often get a milky moustache flecked with cocoa when you place your cup back on the saucer. Now, thanks to the geniuses at Frito-Lay’s, you never have to look like a milky-faced idiot ever again! You can just eat your cappuccino. In potato form.

Or, at least, you could have done, had the American public lost their minds and voted to make it Frito-Lay’s newest regular flavour. This gross-sounding flavour was one of 4 prospective new tastes the company offered for a public vote (along with mango salsa, cheddar bacon mac ‘n’ cheese and—the eventual winner—wasabi ginger). The cappuccino chips were universally hated, garnering terrible reviews from food writers and coffee aficionados alike (even though the milk-froth-art on the packet was expertly poured by a barista from fancy Chicago coffee shop Wormhole).[1]

You may have heard of using a sugary soda in making beef jerky, so why not a soda that tastes of beef jerky?Teriyaki beef, so from Japan, apparently. Made in America.

Described as ‘surprisingly sweet’ (Jesus wept, that makes it worse), this soda is clearly a novelty item aimed at the type of person who loves pranking their friends. But, given the popularity of a hot beef-flavoured beverage called ‘Bovril’ amongst older soccer fans on the cold terraces of football stadiums in England, maybe the guys and gals at Beefdrinker could explore that market? Could we see them as the shirt sponsors for Manchester United some day? Probably not, Chevrolet could probably outbid them. For now.[2]

For those who aren’t content to let their drunken relatives ruin Christmas, novelty confectioners Archie Mcphee make a line of oddly-flavoured candy canes. One flavour guaranteed to make for an interesting culinary experience at the Xmas table? Clams—muddy shellfish flavour. That’ll do it.

But that was way back in 2018, surely they’ve released more sane flavours since this crime against the festive season? A quick peruse of their website will soon disabuse you of this notion. Ketchup, shiitake mushroom and, for the health conscious, kale-flavoured candy canes are now available for purchase. Here’s hoping a Listverse readers aren’t so malevolent as to buy these for 2021s ‘Secret Santa’…[3]

Vegemite (and its northern hemisphere cousin Marmite, which is essentially the same thing—both are made from yeast extract) really splits opinion—for some, it is a dark, salty, gooey savoury treat to spread on toast or in a sandwich. Others think it tastes like a shoe. An old, dirty shoe. How could such a product become even more contentious, given this well-established split in public opinion? Shove the stuff inside a beloved chocolate bar, of course.

Cadbury chocolate is perhaps the best-loved chocolate brand in the world (sorry Hershey fans, the rest of the world isn’t all that fussed, whereas Cadbury has fans all over the world). Fans of Vegemite AND Cadbury must have lost their shit when, back in 2015, the two brands combined to release the limited edition Cadbury Dairy Milk with a Vegemite caramel centre. Haters of the tangy savoury spread would have been equally up in arms. How could their favourite chocolate bar sully itself? Marketing-wise, this was wise marketing; the company reported a big increase in brand engagement over the limited period. People were once again discussing Cadbury, even if it was to damn them to the fiery pits of hell for ruining their tasty treats.[4] 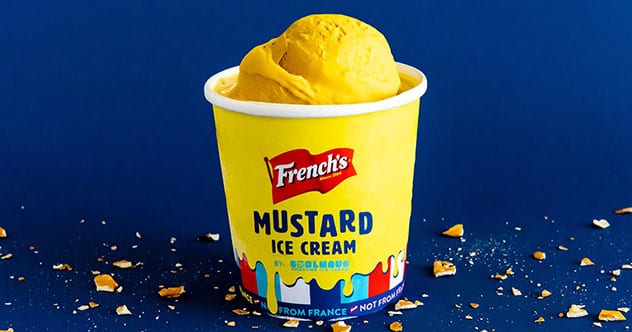 Heston Blumenthal is one of the world’s foremost chefs. He is famous for pushing the boundaries of gastronomic invention with his innovative dishes served at his 3-Michelin-Starred restaurant, The Fat Duck in Bray, England. Now, eating snail porridge or parsnip cereal is par for the course in such a fancy restaurant. But mass-produced in a popular supermarket chain? You better believe it.

Created to accompany savoury dishes like soups or alongside charcuterie, Heston Blumenthal’s creation aims to bring some fine-dining flair to the home cooking scene. Or capitalise on the pretentious love of big names and novelty.

Although, hot dog vendors could use this as inspiration in finally breaking into the frozen dessert market that’s so jealously guarded by those dastardly ice cream truckers.[5]

Could there be a plainer option that ‘salted’ in the potato chip world? Turns out there is. Cucumber-flavour. China’s other potato chip flavour offerings are a mixed bag. Flavours like ‘Beef Noodle’ and ‘Roasted Chicken Wing’ sound pretty good. ‘Grilled Squid’ and ‘Blueberry'(!), not so much. But at least these are actual flavours, as in, additions to the chip that’ll taste of something. Apart from a mild grassy note above the potato, one cannot imagine that a cucumber potato chip would taste of anything, really.

Next up for Lay’s China: Natural Spring Water Flavoured chips.[6] 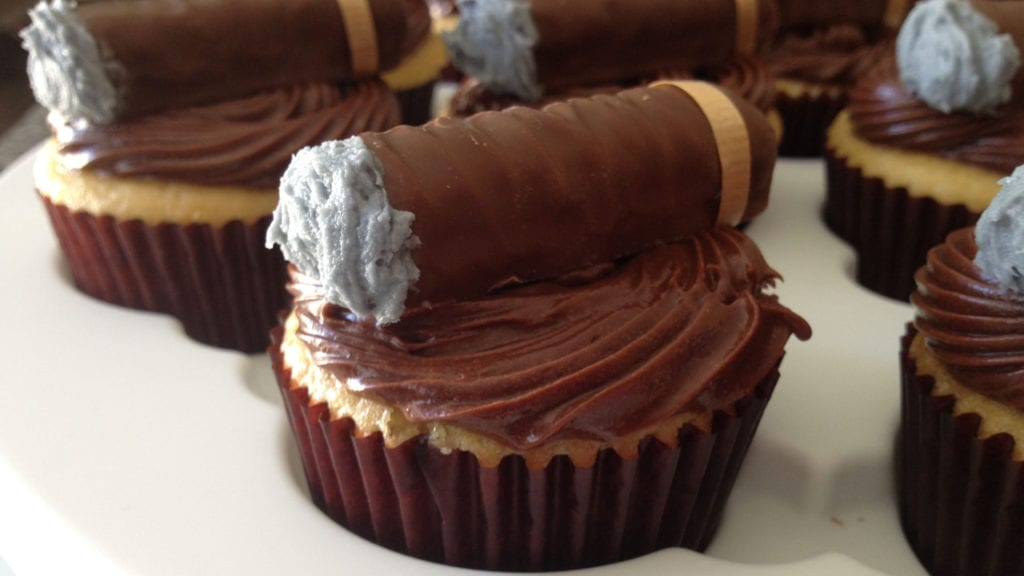 This entry is tinged with a touch of sadness. New York bakery ‘Prohibition’ was a site for foodie pilgrimage for 8 years, drawing in lovers of cupcakes, growing in popularity, winning awards and even releasing a cookbook. Having grown a loyal following even before they opened the bakery, selling their range of innovatively flavoured desserts at the Hester Street Fair, patrons would queue around the block to purchase their special and limited edition baked goods. One reoccurring favourite, however, sounds gross.

The ‘Scotch and Cigar’ cupcake was only available in store and limited to one per customer. It was also age-restricted—the frosting was made with Laphroaig scotch whiskey (which is a ‘peaty’ malt that tastes a little bit like hot mud—an acquired taste, to say the least). But the boozy frosting wasn’t the weird thing here. The cake itself was flavoured with molasses, black pepper and infused with actual tobacco. If you’ve ever sipped a pint of beer that someone has ‘accidently’ dropped a cigarette butt in, this won’t appeal to you.

This sole gross-sounding cupcake aside, the rest of the products they offered sounded delicious. Sadly, the bakery has since closed forever. Co-owner Leslie Feinberg stated that “…the dessert scene was moving in a direction that I wasn’t interested in”. Fair enough, but like many other recently-shuttered small independent businesses in the Big Apple, it’s sad to see them go.[7]

What better way to cool off on a hot day than chugging an ice cold soda from a beautifully sculpted glass bottle? A soda that tastes of curry powder.

Ramune have been making carbonated beverages for the Japanese public since 1884, when a Scottish pharmacist named Alexander Cameron Sim introduced the people of Kobe to lemonade (‘ramune’ is the Japanese pronunciation of ‘lemonade’).

They’ve had some pretty wild flavours over the years—’cream stew’, ‘kimchi’ and ‘chilli oil’ being some of the grossest. But no other flavour sounds more opposed to the original idea of a fresh, thirst-quenching lemonade than ‘curry soda’.[8]

2 Just A Normal Beer From Iceland

Started in 2012, Brugghus Steðja has a decent range of delightful-sounding beers, made with pure Icelandic water that is sourced from their very own family-owned spring (some of the best, purest water on the planet, apparently). Then you have the whale testicle beer—oh, so whale balls aren’t gross enough for you? What about whale balls smoked in sheep crap? That’s what the brewery uses in brewing one of their most popular ales…. as you could probably guess, animal rights activists were outraged by this.

Despite the backlash seemingly not effecting the brewery’s sales, the fact that smoked whale testicles are banned in most EU countries certainly did. How could one of their most popular beers find its way abroad, raking in some of those sweet euros for the small brewery? Well, in a stroke of genius (madness?) they decided to use sheep shit-smoked rams balls in their ‘Steðji Hrútur’ export beer instead. Much better.[9] 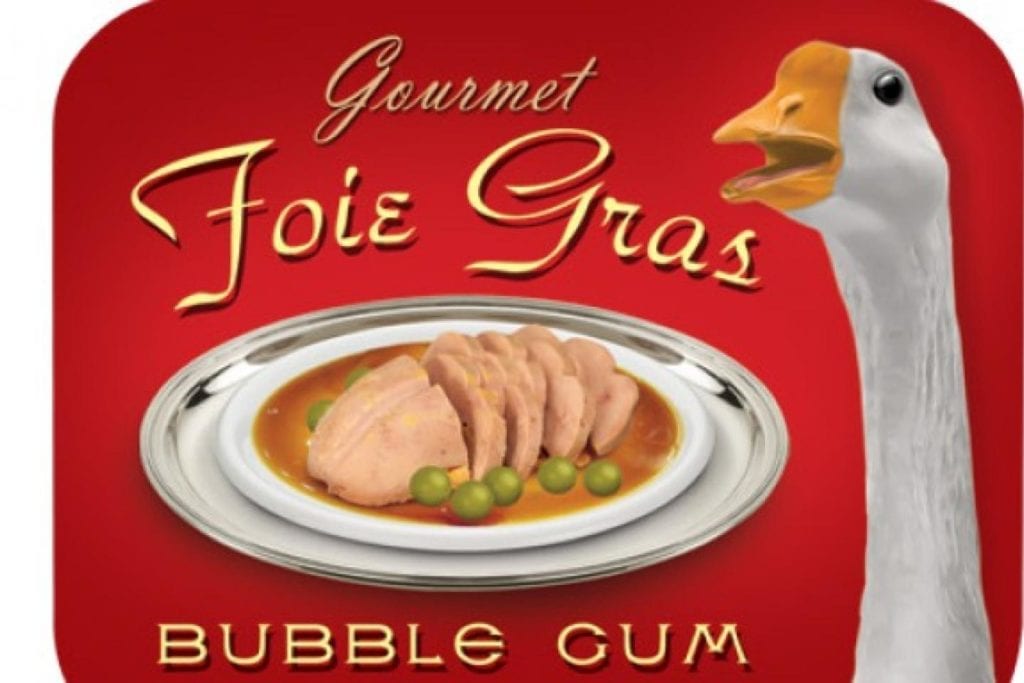 Nobody feels fancy when chewing gum. In fact, people are often looked down upon for such behaviour. Now, thanks to those geniuses of novelty foodstuffs at Archie Mcphee (they’ve done it again!) you can now be the fanciest person in the room and chew gum. In fact, you’ll be fancy because of the gum! What flavour could they possibly be? Champagne? Black truffle? Afternoon Tea?

Wrong. These are foie gras flavoured, you peasant.

French delicacy foie gras is made by force-feeding ducks (historically speaking, it would be geese, but ducks are more common now) until they get an engorged, fatty liver. The liver is then consumed like a pate.

If the idea of force-fed duck/goose liver-flavoured gumballs weirds you out, don’t worry—you’re normal. Still, if you want to be a real aristocrat, why not give these a go? Either that, or you could get some veal-flavoured vape liquid…[10]