New York City wasn’t always the gleaming skyscraper hub that it is now. In 1624, the Dutch settled along the Hudson River and stayed for two years before establishing the colony of New Amsterdam on Manhattan Island. The British took over control of the area in 1664 and renamed it New York City. New York City was the capital of the U.S. from 1785 to 1790 and has a rich and interesting history. One that provided ample reasons to take photographs, some of which are vintage artifacts today.

Today, New York is a huge tourist attraction for people worldwide who want to take in Times Square, gaze at the famous buildings, watch a Broadway show, or take a trip to see the Statue of Liberty. Looking at the old photographs now, it is fascinating to see how the city has grown to be the mammoth attraction it is in modern times, with a population of over 8.5 million—especially considering that around 20,500 years ago, it was nothing but a 1000-feet thick sheet of ice. 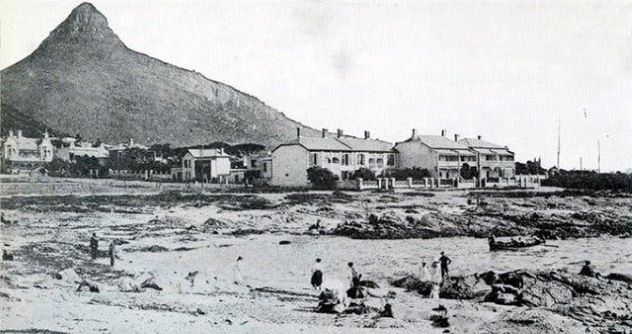 Cape Town, also known as the Mother City, is located in the Western Cape province of South Africa. The city lies at the foot of Table Mountain and boasts the second-most residents in the country.

Three Anchor Bay is a very popular, upmarket suburb of Cape Town, renowned for the beach of the same name where famous Afrikaans poet, Ingrid Jonker, drowned herself in 1965. The suburb sports many high-rise apartment buildings overlooking the sea and a raised promenade that is a firm favorite of joggers. Visible through gaps between the buildings is Lion’s Head, a mountain that lies between Table Mountain and Signal Hill.

However, back in 1905, Three Anchor Bay only had a few houses, and there wasn’t a promenade in sight. Instead, there was an expanse of sandy beach where bathers could lounge in the sun, and Lion’s Head was in full view.[1] 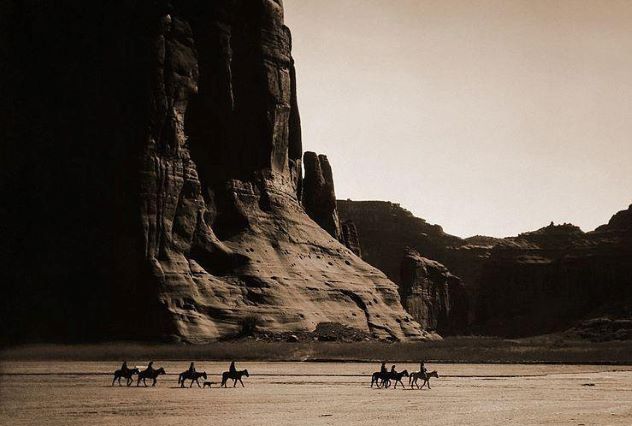 The Ancient Puebloans settled in Canyon de Chelly, Arizona, making use of the natural water sources, rich soil, and abundant animal life to sustain their families. Life was good here until the mid-1300s when the Puebloans left the area searching for better farmlands. Following their departure, their Hopi descendants started planting corn fields and fruit orchards in the canyons. The Hopi also didn’t stay, and the canyons then became home to the Navajo people. The Navajo Nation and the National Park Service share resources in modern times and continue to work together to preserve Canyon de Chelly.

In this striking photograph taken in 1904, Navajo riders can be seen crossing the desert with Canyon de Chelly towering above them. The image was captured by Edward S. Curtis and is one of his best-known photographs.[2] 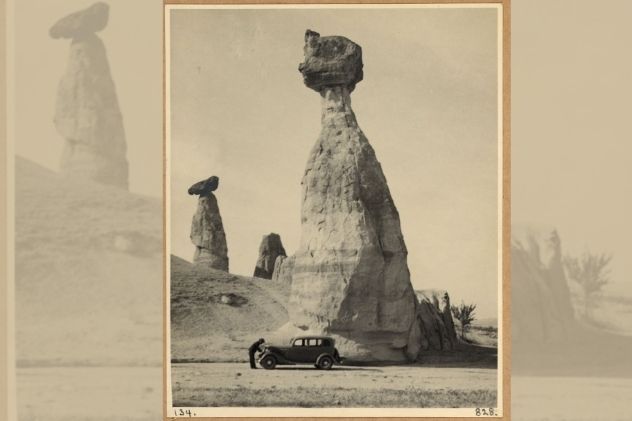 Cappadocia is the place of “fairy chimneys,” which are remarkable rock formations that change color every day at sunset. The rocks were formed after ancient volcanic eruptions covered the area in thick ash, which later became solid soft rock called “tuff.” Over time, erosion shaped the rocks to form pointy shapes, some as tall as 130 feet.

During Roman times, Christians who suffered persecution fled to Cappadocia and soon realized that it was relatively easy to dig into the soft rock. Soon houses, caves, storehouses, and even churches sprung up. They also built underground cities reaching almost ten stories deep and with enough room to hide 10,000 people at a time.

In 1935, John D. Whiting and G. Eric Matson traveled to Cappadocia at the request of the National Geographic Society, during which they captured a series of 134 photographs, including this one with their stationary car in front of one of the fairy chimneys.[3] 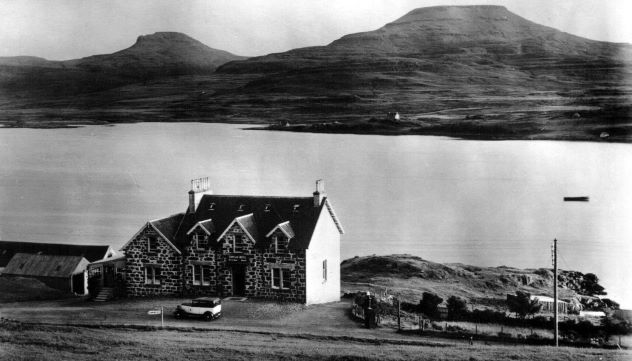 Magical is the word that comes to mind when looking at photographs of the Isle of Skye. Skye is the largest of the Inner Hebrides islands, and much of the landscape consists of moorland. Here you will find Dunvegan Castle, picturesque fishing villages, the famous Fairy Pools, and if luck is on your side, you might even catch a glimpse of the Northern Lights.

Skye has been occupied since prehistoric times, and its long history has provided many reasons for photography, other than the magnificent landscapes, that is. In this photograph (date unknown) is a house in the village of Dunvegan overlooking a sea loch.[4] 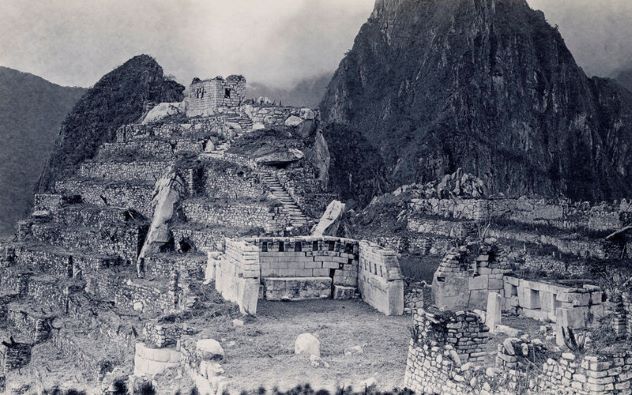 The ruins of Machu Picchu have a deeply mysterious atmosphere that can mesmerize you even if you’re just looking at them in a photograph. It is believed that German adventurer Augusto Berns may have visited the ancient Inca citadel in 1867, but it wasn’t truly “discovered” until 1911 when Yale professor Hiram Bingham was led to the site by Melchor Arteaga, who was a local Quechua-speaking resident. At the time, Bingham was in search of Vilcabamba (the lost city of the Incas).

Machu Picchu was excavated between 1911 and 1915 and then in 1934 and again between 1940 and 1941. The general consensus is that the site was constructed and occupied from the mid-fifteenth to the mid-sixteenth century and was likely a palace complex of the ruler, Pachacuti Inca Yupanqui.

Bingham captured a series of photos during his time at the site, providing an interesting glimpse at the excavation process and what Machu Picchu looked like over one hundred years ago.[5] 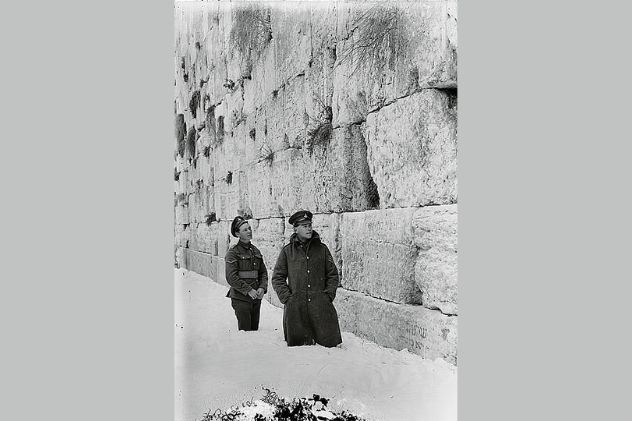 Jerusalem is home to the Wailing Wall, also known as the Western Wall, which is the most religious site in the world for the Jewish people. Thousands of people make the journey each year to visit the site and recite prayers which are often written down and placed within the cracks of the wall.

King Herod built the wall in 20 BC, and when the Romans destroyed the adjoining Second Temple in AD 70, its support wall (the Wailing Wall) was spared.

In this photograph, taken in 1921, a section of the massive wall can be seen, with two British soldiers standing knee-deep in the snow before it.[6] 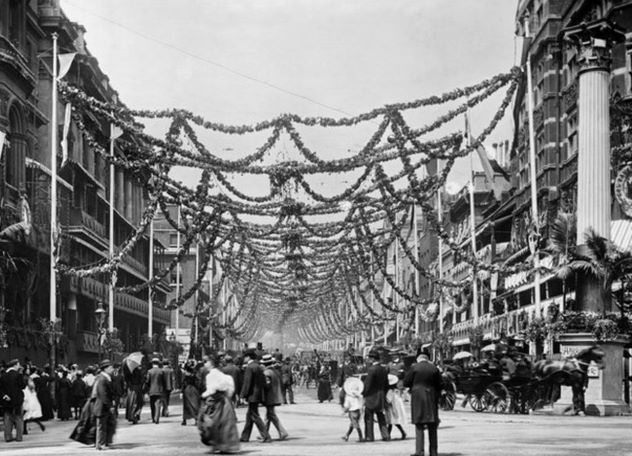 In the 17th century, St. James’s was a residential location for the British aristocracy. St. James’s is located in the City of Westminster, London, and forms part of the West End. The central district’s name is derived from the dedication of a 12th-century leper hospital, and the site of this hospital has been converted to St. James’s Palace.

The palace was built by order of Henry VIII in the 1530s and is the most senior royal palace in the U.K. It was one of the most important palaces of the early Georgian monarchy but was eventually displaced by Buckingham Palace around the early 19th century.

In 1897, Queen Victoria celebrated her diamond jubilee. The celebrations began with a Thanksgiving service at Windsor Castle. When she returned to London the following day, she found Union Jacks decorating balconies as far as the eye could see as well as a sea of flowers and smiling faces.

St. James’s Street, the main street in St. James’s, was decorated with garlands and lights and temporary structures set up in front of houses, shops, and offices as part of the festivities. A photo of the very festive-looking St. James’s Street was captured by York & Son and is now part of an exhibition of pictures at Birmingham Library.[7] 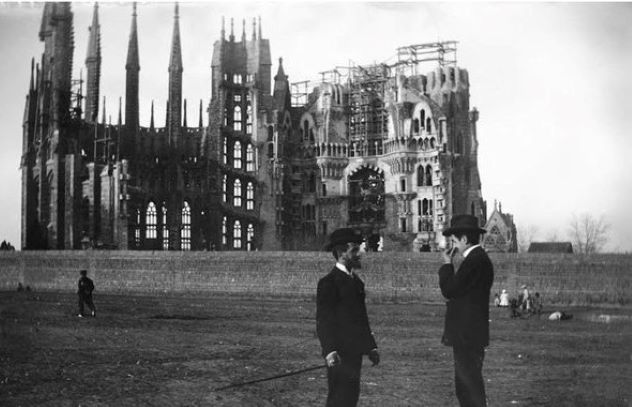 It’s been almost 140 years since the design of The Sagrada Familia saw the light. The original architect Francisco de Paula del Villar was replaced by Antoni Gaudí, who changed the vision del Villar had. Gaudí worked on the project until his death in 1926, after which Domènec Sugranyes took over.

As decades passed, work on the minor basilica continued with construction halting in March 2020 due to the Covid-19 pandemic. In April 2021, construction continued with the focus on an 18-meter shaft of reinforced concrete that tops the Sagrada Familia. It is hoped that the building will finally be completed in 2026, which will also be 100 years after Gaudí’s death.

This photograph of the structure was taken in 1905, 23 years after construction started.[8] 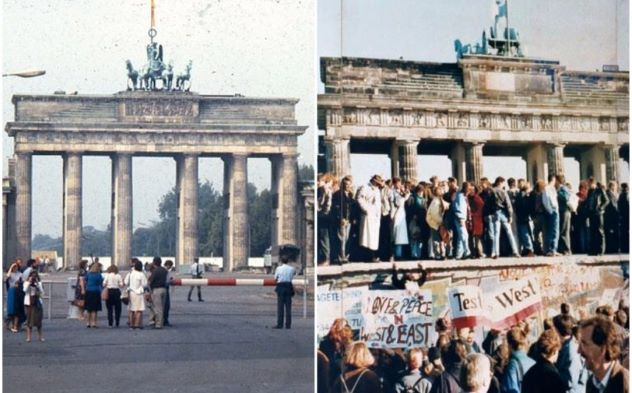 The Brandenburg Gate is one of the most famous landmarks of Germany. It was built during the 18th century on the order of King Frederick William II, and it stands on the site of a former city gate that used to mark the start of the road from Berlin to Brandenburg an der Havel.

The Gate saw many major historical events take place, and while it was seen as a symbol of war for a long time, it is also upheld as a symbol of unity and peace in Europe. It was also the site where U.S. President Ronald Reagan made a rousing speech and where 4000 demonstrators gathered to prevent supporters of the anti-Islam group Pegida from marching to the Gate.

Every year around one million people flock to the Gate for a massive New Year’s Eve party.

This photo (left) of the Gate was taken in 1928 with the Quadriga statue that includes the Roman goddess of victory, Victoria, clearly visible on top of it.[9] 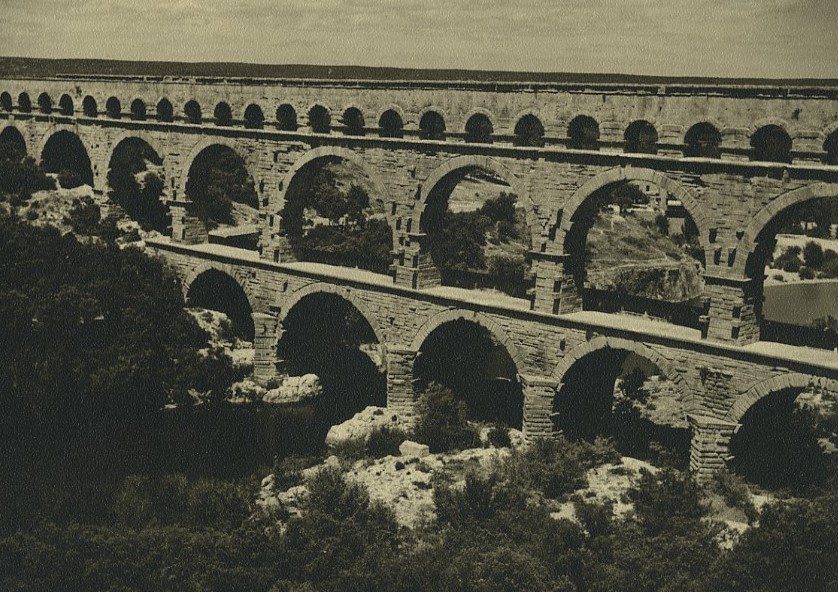 The Pont du Gard aqueduct is a masterpiece of technical and artistic proportions. The Romans built it in the first century AD for the purpose of carrying water over 50 kilometers to Nemausus (Nîmes today). The structure took five years and 1,000 laborers to build and weighs around 50,000 tons. It crosses the river Gardon and is the highest of all the aqueduct bridges built by the Romans.

Its secondary use was as a toll bridge with the levies collected from travelers used for the upkeep of the structure.

Today it is one of the most-visited monuments in France, and it has been since the 18th century. This photograph of the magnificent aqueduct was taken by an unnamed visitor in 1947.[10]