Australians are well-known for their sense of humor. We like to poke fun at everyone. We laugh at each other, we laugh at ourselves, and we love to poke fun at bureaucracy. So it’s no surprise that some of our quirkiest tourist attractions actually started out as a bit of a joke.

From teddy bears and garden gnomes planted in fun, which have turned into thriving colonies, to a submarine in an inland park, our Aussie sense of humor shines through in some of our funniest tourist attractions.

10 Submarine In An Inland Park 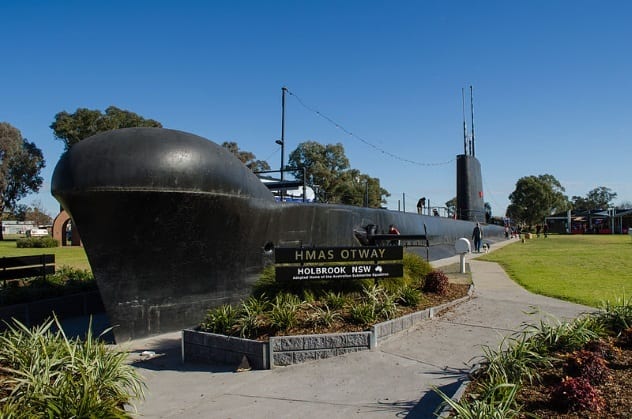 A rural Australian park is the last place you would expect to find a submarine. Yet the HMAS Otway is a major tourist attraction in the New South Wales town of Holbrook. The town was renamed in 1915 after their resident war hero, Lieutenant Norman Holbrook, who was the first submariner to receive the Victoria Cross (VC) during World War I.

Like residents of many rural towns bypassed by the highway during the 1990s, Holbrook residents were looking for a unique tourist attraction to bring passing visitors to their town. When the mayor suggested acquiring a submarine, the townspeople initially thought he was joking. However, the idea of establishing a memorial to submariners in honor of their own VC recipient soon caught on.

After much community fundraising and a generous bequest from the Holbrook family, the upper parts of the outer casings and the fins of the decommissioned HMAS Otway were purchased.

The submarine was moved to Germanton Park in Holbrook, where it has become a popular tourist attraction. The complex has a submarine museum including a mock interior where visitors can gain an insight into what life was like on a submarine.[1] 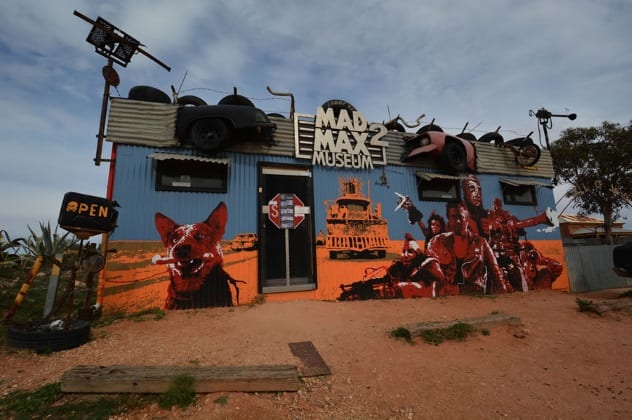 We all have our favorite movies. Some us can even become a little over-passionate, collecting memorabilia and watching reruns. However, one man’s passion saw him move halfway around the world to open a museum in the most unlikely place.

Scenes from the earlier Mad Max movies were shot in the remote New South Wales outback near the sparsely populated town of Silverton. (The 2016 Australian census showed that the town had a population of just 50.) Yet it was to Silverton that an Englishman named Adrian Bennett came in 2009 to fuel his obsession with the movie Mad Max 2.

He spent his time collecting actual props, relics, and memorabilia from his favorite movie. The collection has grown into a full-scale museum, where Mad Max fans can not only view his collection but also learn more about the filming of the movie on the location in which it was set.[2]

8 Utes In The Paddock 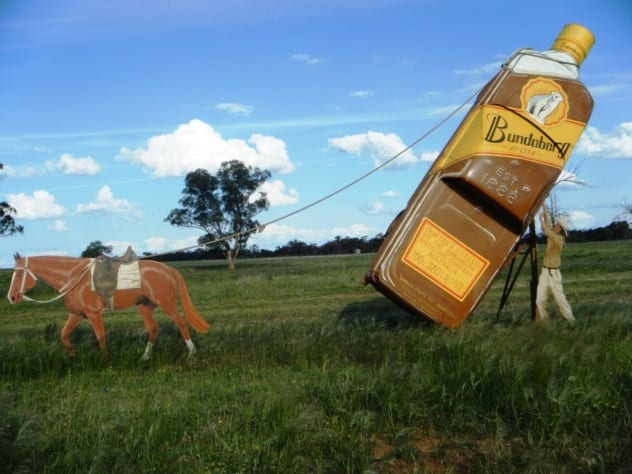 A number of years ago, a local landholder decided to turn a rusty old Ute into an artwork. Artists were then invited to repurpose rusty car bodies into art forms, which attract many tourists to the district each year. Twenty cars are upended or suspended at precarious angles to depict the life and characters of the Australian bush.

Here, you will see Australian identities such as Clancy of the Overflow and Dame Edna Everage sitting on a traditional Australian “dunny.” Aussie icons represented include a larger-than-life bottle of Bundaberg Rum and a mammoth jar of vegemite.

The display was originally installed on a remote property 30 kilometers (19 mi) from Condobolin but has since been moved to the outskirts of the town, where it is more accessible to tourists.[3]

7 The Principality Of Hutt River 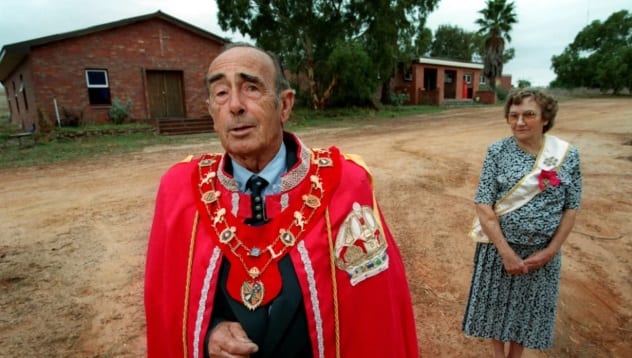 Every town has its eccentric residents, but one West Australian farmer’s persistence in seceding from the Commonwealth of Australia has become a quirky tourist attraction. A bureaucratic row over agricultural taxes in 1970 saw the farmer take things into his own hands. Leonard Casley (pictured above) simply established his own country, the Principality Of Hutt River, on his 75-square-kilometer (29 mi2) property near the town of Geraldton.

The Australian government has never recognized the sovereignty of the principality, but “Prince Leonard” still maintained his own postage stamps and currency until his death in 2019. Queen Elizabeth II, however, obviously enjoyed the joke, sending Leonard a letter of congratulation on the principality’s 46th anniversary. Prince Leonard abdicated in 2017 in favor of his son, Graeme, who continues to rule over the micronation.

The town of Nain has been established as the main administrative center of the principality. Here, tourists who want an extra passport stamp can collect one from the Principality of Hutt River while they view the historic displays.[4] 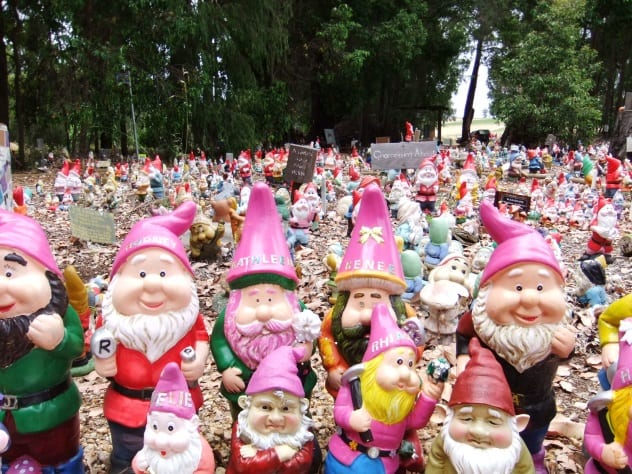 A cheeky community protest over proposed council roadworks has snowballed into a quirky tourist attraction for the West Australian town of Wellington Mill.

When the council announced controversial plans to construct a roundabout in 1995, a couple of cheeky residents “claimed the plot” by placing a couple of garden gnomes on the proposed site as a bit of a joke. The joke soon spread, and the gnomes quickly multiplied. Today, there are an estimated 5,000 gnomes residing in “Gnomesville,” which has become an unlikely tourist attraction.

Here, you will find gnomes enjoying just about every recreational activity, from fishing to music to sporting matches. Visitors are invited to add their own gnome to the growing collection, as long it is marked with where it came from.[5] 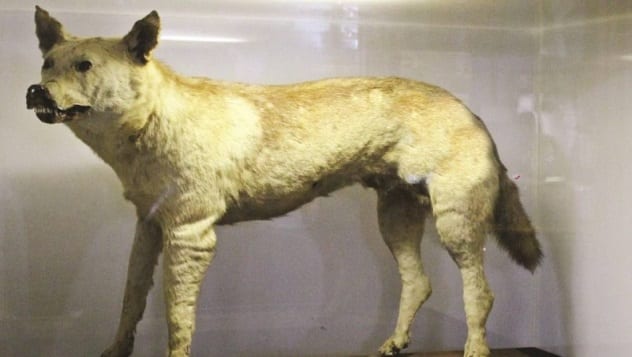 A stuffed tiger in a glass case, believed to be responsible for a livestock killing spree, is an unlikely tourist attraction in the small South Australian town of Tantanoola.

During the 1890s, an unknown creature was terrorizing livestock in the small rural town. Tales of sheep being eaten whole and a creature leaving footprints 10 centimeters (4 in) in diameter were widely circulated in the national media. Locals became fearful that the unknown predator might begin to prey on humans. The creature was dubbed the “Tantanoola Tiger” following reported sightings of a striped feline in bushes surrounding the village.

A large reward was posted for its capture, and unsuccessful shooting parties set out to hunt and kill the creature. Casts of the pawprints suggested it was a wild dog, not a tiger.

Eventually, in 1895, the large creature was shot and killed. There was much speculation about the animal’s exact species. It appeared to be a dog, but not of any known breed. It wasn’t a dingo, and it looked remarkably like a wolf. It was later determined to be an Arabian wolf. No one knows how it came to be in Tantanoola.

A taxidermist was called in to stuff the infamous creature, which was enclosed in a glass case and paraded around for viewing at the price of a few shillings. The famous “tiger” even became the mascot for the local football team early in the 20th century. Today, it is a somewhat morbid tourist attraction in the Tantanoola Tiger Hotel near Mount Gambier.[6] 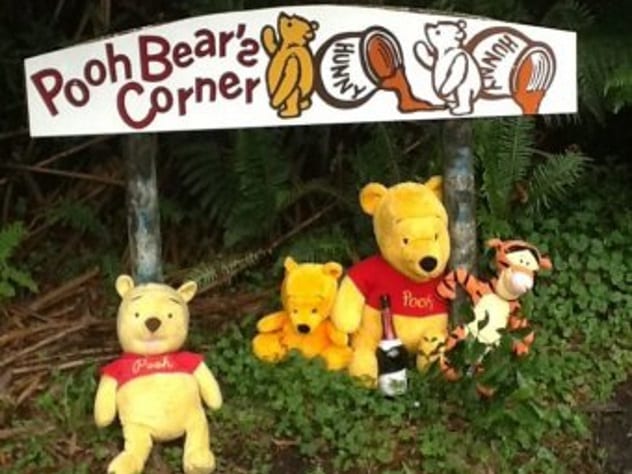 A bend in the long, winding highway linking inland New South Wales with the South Coast is perhaps the last place you would expect to find a children’s tourist attraction.

Like many of Australia’s quirkier attractions, Pooh Bear’s Corner was established through one individual’s imagination and eventually took off. A local family from Crookwell spotted a disused cave halfway down Clyde Mountain on their frequent trips to the coast in the early 1970s. The parents concocted the story that the cave was, in fact, home to A.A. Milne’s Winnie-the-Pooh for the amusement of their children.

They soon began leaving stuffed bears and handwritten signs at the spot on their journey down the mountain. The idea soon caught on, and others began leaving bears at the site, which became known as Pooh Bear’s Corner. Eventually, the local council caught onto the idea, erecting a permanent sign at the attraction.

Children and kids at heart still look out for the teddy bears congregating in Pooh’s cave on their way down Clyde Mountain today.[7] 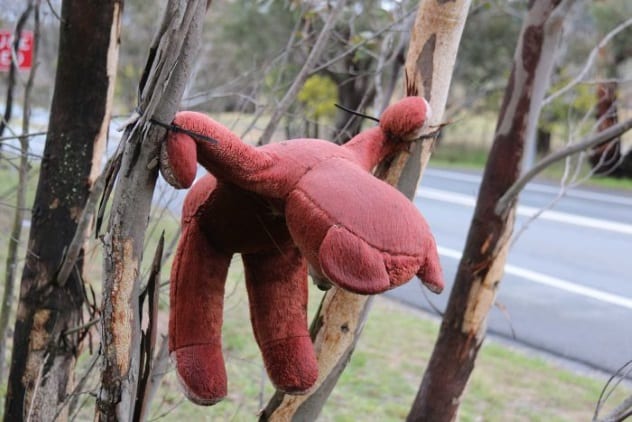 Along the highway from the rural town of Bungendore to Queanbeyan, just outside Canberra, teddy bears once again provide a unique tourist attraction. For several kilometers along the roadside, tourists can stop to see the proliferation of teddy bears hanging from trees. Some are relatively new, others are looking somewhat sand- and weather-worn.

The first teddy bears appeared in the late 1980s. Since then, their numbers appear to be growing at a significantly higher rate than the native koalas that inhabit the area. Visitors to the colony regularly make their own additions to the Bungendore teddy bear colony.

How the teddy bear colony began is somewhat of a mystery. Theories suggest the first bears arrived to protest the removal of trees, threatening the local koala habitat. Another theory is that the first bears were a memorial shrine to a young person tragically killed in a motorcycle accident.

The true origins of the teddy bear colony may be lost in time. However, like many quirky Australian tourist attractions, the trend caught on and has continued to grow to amuse passing motorists.[8] 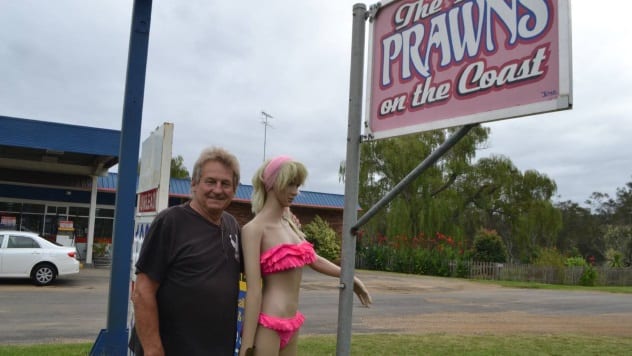 Driving along the Princes Highway between the Southern NSW coastal towns of Moruya and Tuross, motorists probably never gave the tiny fuel stop at Coila a second glance. At least, that was the case until 2013, when the new owner came up with an eye-catching idea to encourage passing drivers to stop and maybe buy some local prawns.

The “Coila Prawn Girl” has become somewhat of a local icon. The bikini-clad mannequin is tied to a roadside advertising sign and has been successful in encouraging motorists to stop. The mannequin has also made the news for being the victim of a couple of abductions over the past couple of years.

Tourists frequently stop to pose for a photo with the bizarre attraction. The eccentric owner has recently added a pink Cessna plane nose-diving into the tarmac as an added incentive for an unusual photo stop.[9] 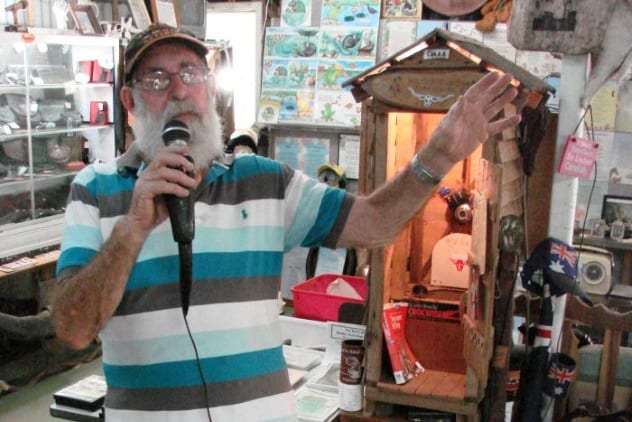 The mere name of the Northern Territory outback town of Humpty-Doo raises a bit of a giggle with visitors. One local larrikin has taken the humor to a new level.

Waldo Bayley, the local gift shop owner, also writes Australian bush poetry, funny little pieces that poke fun at everyone and everything. Not content with simply reciting his ditties to visitors to the shop, he devised an hilarious way to deliver his prose.

Within the shop, he has set up a traditional “bush dunny,” the small, wooden outhouse which once housed the lavatory in the backyard of every Australian home. Waldo actually sits on the dunny to deliver his poetry from the depths of the “thunderbox.” Once again, something that started out as a bit of a joke has turned into a tourist attraction which draws tourists to enjoy a little Aussie humor.[10]

Lesley Connor is a retired newspaper editor who provides travel articles to online publications and through her travel blog.