Whether you’re slowly ascending that three-hundred-foot chain lift hill or blasting out of the station faster than a sports car on the Autobahn, roller coasters are quite potent in drawing out thrill-seekers and daredevils to get that quick hit of adrenaline. Usually, the hallmark of any amusement park would be the tallest and fastest roller coaster in the area. Or perhaps theme parks market the number of times their coaster goes upside down or the amount of time a ride subjects its riders to high levels of G-forces.

Sometimes, though, the key to marketing a roller coaster is to engineer something truly weird, to the point where you question if what you’re looking at is a genuine ride or a click-bait poster’s Photoshop passion project. So here is a list of ten roller coasters from around the world that have no problem making a statement. Albeit a strange, questionable, very unintelligible statement.

The Shuttle-Loop roller coaster model is a classic choice for any new park to get in a looping coaster on a budget. Usually built by manufacturers such as Schwarzkopf or Arrow, these coasters either launch guests through a loop and a slope, or often, the ride will pull the train on a backward lift hill to gain the coaster’s momentum. They’re the very definition of “short but sweet.”

Cobra, in Switzerland’s Conny-Land, is a far stranger Shuttle-Loop, though. Instead of burning off that extra momentum on a 60-degree angle slope, this ride takes its riders upside-down at a diagonal before going through the loop again. This one-of-a-kind element is known as the Scorpion Tail (which, arguably, isn’t very snake-like). Built by Russian manufacturer Pax Company, Cobra was opened to the public in 2010. In 2020, the coaster introduced a new car where other than the front and back row, the four riders face each other, two sitting in forward-facing seats and two in rear-facing seats.[1]

At first glance, Der Schwur des Kärnan looks like an impressive and almost normal-looking ride. Reaching a height of 239-feet tall with a top speed of 78 mph, Kärnan, as it is often referred to, is located in Germany’s Hansa Park and was built in 2015 by German manufacturer Gerstlauer.

Kärnan’s weirdness, however, is secretly tucked into the structure surrounding its lift hill. The ride takes its riders up that 200-foot-plus chain lift at a 90-degree angle… before dropping its riders backward once it reaches the top, only to start climbing up the hill a second time. For real this time. To top that off, the ride has a secret, hidden barrel roll, right after the last (or, I suppose second-to-last) break run, right as soon as the ride re-enters the fortress structure—a sure surprise for anyone caught off guard by thinking the ride’s over![2]

We head over to the U.S. for this ride, specifically Silver Dollar City in Branson, Missouri. Time Traveler is a particularly special roller coaster, in as much as it has spinning cars. And a Linear Synchronous Motor launch. And a 90-degree drop out of the station. And it goes upside-down three times. You see, Time Traveler is aptly named because when you get off of the ride, you’ll be so dizzy, you might not know what decade you’re in.

Time Traveler was built in 2018 by Mack Rides and was the only Extreme Spinning Coaster model in the world until September 2021, when another roller coaster model of this type was built in Belgium, known as the Ride to Happiness. All being said, though, Time Traveler has been given rave reviews by its American fans for the bizarre spinning sensation and the dizzying forces that it enacts.[3]

We’re staying in the U.S. for this next coaster, located in the Indiana Beach amusement park. It’s easy to see why this wooden roller coaster, built by Custom Coasters International, fits this list. Instead of normal roller coaster trains, this wooden coaster features full-on enclosed mine carts. Guests are trapped in trains, facing each other, as they chaotically weave in and out of an artificial mountain built on top of a pier over Lake Schafer.

Another fun bit of Lost Coaster’s history, however, is that it replaced a normal dark ride known as Superstition Mountain. The park manager, in 2002, decided to gut the mountain and try and squeeze in a roller coaster, and while more sane individuals may opt for a kiddie coaster, the visionary, Tom Spackman Jr., was wild enough to envision a compact, enclosed wooden ride. And so, the Lost Coaster of Superstition Mountain careens its captives to this day as the only wooden roller coaster of its type.[4]

The last weird detail in Orphan Rock’s short-lived history is that it was entirely built and designed by Scenic World staff itself; the park wherein Orphan Rocker is located, when most roller coasters are built by established manufacturers. In fact, the reason it was never opened to the public is probably because of this, when tests proved that the ride was too rough or inconsistent for the public. Though it was never really opened, work was done on this roller coaster until 2004, though the park finally gave up the ghost and started demolition in 2017.[5]

Built at Gold Reef City in South Africa in 2001, this roller coaster looks like your standard Dive Coaster model, a roller coaster type that holds you in place for a few seconds before plummeting you down a 90-degree drop. However, what’s unique about Tower of Terror is that the drop takes place in an actual, authentic gold mine shaft. The structure was actually removed and relocated from an old gold mine around five kilometers away before being used as the support for this daunting ride.

Not only that, but instead of using a normal chain lift hill, the mine shaft also houses a single piece of track that goes up on an elevator. To finish off the weirdness, this ride doesn’t even drop straight down; it twists a little during its 90-degree drop to level out at a slight angle, putting its riders through at least 6 G-Forces—so claimed by the park! As a point of reference, Millennium Force at Cedar Point pulls in around 4.5 Gs[6] 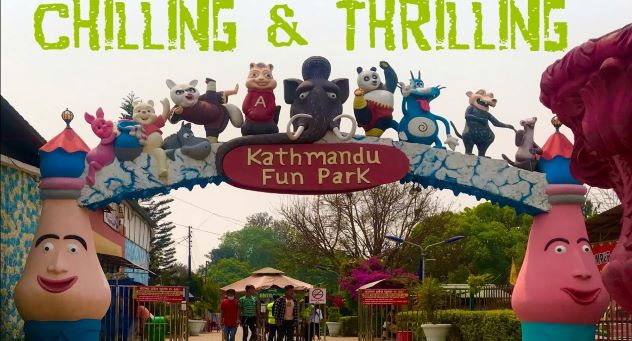 We head over to Nepal for the next roller coaster on this list and also revisit the concept of the Shuttle-Loop! Built in Kathmandu Funpark, sometime around 2004, little is known about this roller coaster, for the park it was located in doesn’t have an official website or as much as a Facebook page. But, it is known that this ride was one of three rides built by Parkash Amusements.

This blue roller coaster is more than your average Shuttle-Loop, however. While it does take riders up a lift hill, drops them, makes them go through a loop, then burns off the extra speed on another slope, this ride doesn’t have an electric, automatic lift hill. The ride operator has to pull the car up themselves, it is claimed, by a lever next to the ride. Sadly, this mystery coaster was closed in the 2010s, though it does have a twin in India, known as Loop Roller Coaster. However, it seems that this ride has its own automatic lift hill.[7]

Here it is; probably the most used click-bait roller coaster of all time, or at least as much as I could find combing through the annals of YouTube. Also known as 搶救地心, Gravity Max is located in Taiwan’s Discovery World, and it was built by Dutch manufacturer Vekoma in 2002. If you take out the lift hill, Gravity Max is almost your standard corkscrew model, taking riders through one inversion at 56 mph.

The strangeness factor of Gravity Max, however, lies in its 114-foot lift hill. The ride takes its passengers on a piece of track that goes up an elevator, similar to Tower of Terror. And then it flips said track downward at a 90-degree angle, holding its horrified riders there before eventually dropping them through the rest of the track. Gravity Max is definitely the most likely roller coaster to trick its riders into thinking that they’re about to fly off the track, and Vekoma has only ever made one roller coaster with this type of lift hill.[8]

Wiener Prater, in Austria, is an interesting amusement park because it isn’t owned by one combined manager and is instead run by different showmen bringing their own rides to the location. Roller Ball, run by operators Kern and Waldmann, is one such roller coaster and is definitely Austria’s weirdest one.

The Roller Ball model hangs its guests on the side of the ride, flipping them back and forth as it winds down a serpentine track, neatly fitting in a small, vertical piece of land. Roller Ball is actually one of three different rides of the same exact ride type, built by Ride Engineers Switzerland; the other two being Wilde Hilde in Schwaben Park and Nid de Marsupilamis in Parc Spirou Provence. Roller Ball itself, however, is the newest model, having been built in 2020. [9]

And this happens three times on Sequoia Magic Loop. This ride, built at Italy’s Gardaland in 2005 by U.S. manufacturer S&S Sansei, is certainly the most eye-catching ride on this list, if not the most nauseating. While it is a hard category to get hard numbers for, there is definitely an argument for the claim that Magic Loop hangs its riders completely upside down more than any other roller coaster on Earth.[10]