In case you haven’t heard, the universe is old. So old, it just kind of popped up about 13.77 billion years ago, for some reason. Throughout that lengthy period, it’s had a lot of time to stretch its feet and evolve into what we see today.

Though it’s stupendous that we can even see that far, which is luckily possible because light has a speed limit of 186,000 miles per second. So we can observe things as they were when their light left its source, many billions of years earlier. And that light reveals some surprising, incredibly ancient (or aged) things.

Related: Top 10 Long-Term Space Exploration Problems We Have Yet To Solve

10 A Mindbendingly Gigantic and Old Quasar

The quasar—unexcitingly known as J0313-1806—is an astronomical hall of famer for its mass and age. It’s 13.03 billion light-years away, and even at this early stage, it’s a doozy.

Though the universe was less than 5% of its current age at this point, the quasar-powering black hole already held 1.6 billion Sun-masses. That’s an absolutely insane quantity, and with stats like these, it’s easy to see why quasars often outshine the entire galaxies that surround them.

The blandly named quasar in question is (was) indeed active, spewing super-hot gasses at one-fifth the speed of light. It’s also altering its environment, as astronomers have detected intense star formation in the host galaxy.

But the black hole is too massive, too early, to have been fed by stars or formed by a collapsing star cluster. Instead, if it skipped these middlemen and started from big blobs of cold hydrogen gas that collapsed directly into a black hole, it still would have been born gnarly: a baby black hole with 10,000 stars’ worth of mass.[1]

9 A Galaxy That Seemingly Skipped Billions of Years of Evolution

Every so often, a galactic observation bungles conventional cosmological models. One such bungler is a galaxy known as ALMA J081740.86+135138.2. It’s more than 12 billion light-years away and therefore very old, to understate things. But it’s too much of a whopper and too orderly for such universal infancy.

Around this time, less than 2 billion years after the Big Bang, about 90% of early galaxies were “train wrecks,” or chaotic clumps of gas and dust. But our dear ALMA J081740.86+135138.2 already sported a nice rotating disk and matched our Milky Way in size, at 100,000 light-years across. Plus, at 70 to 80 billion solar masses, it’s pretty beefy for a faintly shining antique galaxy.

Since the universe was only 1/10th its current age, the surprisingly hefty specimen is an unexpected find in such early cosmological days. Typically, it takes billions of years for galaxies to whip themselves up then calm down so that the gas can cool and coalesce into Milky Way-like structures.

But it’s possible to skip this whole billions-of-years-long process if the cold gas flows along dark matter filaments, as on a cosmic highway, to prematurely create beautifully spiraling galaxies.[2]

8 The Early Universe Wasn’t So Empty

About 300,000 years after the Big Bang, everything was filled with an opaque fog of neutral hydrogen that blocked light and made the young universe invisible. It was only unveiled when the first cosmic bodies burst forth to shine and ionize (electrify) the hydrogen, lifting the “fog.”

Luckily, scientists can peep more than 13 billion years into the deep past to see how it happened. An improved gravity lensing technique revealed the cosmos when it was between 500 million and 1 billion years old. Though the researchers didn’t find their primary target, the first stars ever born, known as Population III stars.

But they did find a surprising amount of galaxies already brewing. Up to 100 times fainter than any previously detected, with lower masses than anything Hubble has spied so far. This suggests that the first stars formed even earlier than anyone thought.

And that, a mere 500 million years after the Big Bang, an unexpectedly rich collection of galaxies was already ionizing the opaque intergalactic murkiness of neutral (non-ionized) hydrogen.[3]

Nearby galaxy is a “fossil” from the early universe

You don’t have to go rummaging through deep space to find the universe’s oldest galaxies because they’re within astronomical “walking distance.”

Some of the faintest dwarf galaxies surrounding the Milky Way, including Segue-1, Bootes I, Tucana II, and Ursa Major I, are more than 13 billion years old. This places these satellite galaxies at the beginning of the universe, making them some of the first galaxies ever—among the ones that dispelled the ever-reaching darkness of the “cosmic dark ages.”

These findings support the “Lambda-cold-dark-matter model,” which states that dark matter particles (whatever they are) drive cosmic evolution. And they began doing it more than 13 billion years ago, when congregations of dark matter, by their gravitational influence, persuaded particles of matter to accumulate and form all the structures we see now.[4]

Discovery of a Strange Planet Around a White Dwarf

Barring any unforeseen catastrophe, the Sun will die in about five billion years. When it does, it’ll puff out, shed its outer layers, then settle down as a white dwarf.

A white dwarf like the dead star SDSS J122859.93+104032.9 is located about 410 light-years away. It was originally about twice as massive as the Sun. But when it died, it puffed up and lost its outer layers, shrinking and becoming only 70 percent as massive as the Sun. It’s also surrounded by a cosmic graveyard. It’s encircled by a debris field made from the shattered bodies of the planets it once warmed.

In its death throes, the star obliterated its solar system. But astronomers picked something surprising out of the jumbled carnage. A planetary fragment, a heavy metal (physically and figuratively) body that survived the death of its planetary family.

The fragment was detected by a stream of gas emanating from its body. Its size is iffy, possibly just a kilometer across. Or it could rival the solar system’s largest asteroids, at several hundred kilometers. It’s deep within a gravitational well that exerts believe has a pull 100,000 stronger than the Earth’s. So to have held up, the fragment could be the ultra-dense, metallic remnant of a planetary core.[5]

DLA0817g, aka the Wolfe Disk, is an anomaly. A rotating disk galaxy, spinning at 170 miles per second, upset galactic formation theories by existing when the universe was only 1.5 billion years old.

Astronomers thought galaxies like these required much longer to form their clean, stable disks. And by much longer, we mean about 6 billion years, or approaching half the universe’s current age. But like all fortuitous finds, DLA0817g nonchalantly discards man-made theories. It’s unlike typical galaxies formed around this time, which are messy, banged-up things caused by big-time collisions.

But that’s not the case here, suggesting a different mechanism. If DLA0817g were sucking up streams of cool gas, like a gigantic vacuum cleaner, that would allow it to hold its form. And to continue pumping out stars at a rate ten times faster than in our Milky Way.[6]

Quasars: Monsters From The Early Universe – Answers With Joe

Astronomers peered deep into space-time and found a bunch of quasars at the edge of the universe, more than 13 billion light-years away. That’s such an incredibly distant, unimaginable epoch that its inhabitants existed in a dust-free environment. Because there hadn’t been enough time for stars to spew out the plumes of molecules that coagulated into cosmic dust.

Of the 21 quasars detected in the baby universe, J0005-0006 and its buddy J0303-0019 are the first ones ever observed without any dust around them. They belong to the most-distant population of quasars detected, which were already popping up in surprising abundance less than a billion years after the Big Bang.

These 21 ancient quasars from the infant universe are powered by supermassive black holes that hold the contents of 100 million suns. Due to their dust-free complexion, astronomers believe these to be first-generation quasars. Yet these things are so stupidly energetic and modern astronomy so precise that researchers can see them literally across the entire universe.[7]

3 A Star Nearly As Old As Existence Itself 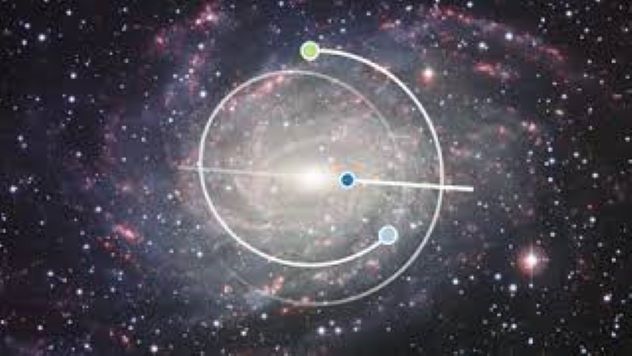 A newly discovered star, 2MASS J18082002–5104378 B, is unbelievably ancient: 13.5 billion years old. That’s almost as old as the universe itself. And it will continue to burn for trillions of years over a ridiculous span that dwarfs the current age of the universe. And here’s a huge surprise: it wasn’t found out at the far reaches of space, but close to home in the Milky Way.

In another surprise, it’s located in the “thin disk” of our galaxy, in the same neighborhood that houses the Sun. But unlike good ol’ Sol, this star with the terribly unwieldy name is so old it could be just a single generation removed from the first-ever stars, which graced the void with light.

These first stars were devoid of metals. Metals were created later on, as their sub-atomic components were smashed together in the fury of stellar cores or during supernovae. So instead of metals, these ancient stellar geriatrics were full of hydrogen, helium, and lithium.[8]

NGC 1277 is unique. It’s an old soul, a relic that shows what galaxies were like during the universe’s early eons. Like many old-timers, it’s aversed to change and has “remained essentially unchanged for the past 10 billion years.”

It’s one of over 1,000 galaxies floating about the Perseus cluster, about 240 million light-years away—even though these “1-in-1,000” relics are generally found much, much farther away. It almost exclusively contains elderly old stars born 10 billion years ago. These once shined bright and blue(r) but are now aging and red, enjoying a period of galactic quiescence. And even though NGC 1277 contains twice as many stars as our Milky Way, it’s only a quarter of the size.

NGC 1277 has a grim future. This menagerie of elderly stellar bodies is zooming through space at two million miles per hour. That’s probably too fast to allow it to combine with other galaxies or siphon star-building gas to keep itself spry.[9]

The prevalence of amino acid building blocks is a major factor in universal habitability. A prospect that just improved via the recent discovery that glycine, a simple yet super-important life-forming amino acid, is even easier to form than previously believed.

It was thought that energy was needed to form glycine and its ilk. Energy supplied by, say, ultraviolet radiation. But researchers now say UV is no longer a necessary ingredient in the recipe; glycine can form through the rad-sounding “dark chemistry.”

In the interstellar clouds, tiny, ice-covered dust particles smash into each other like cosmic bumper cars. They fragment and reassemble into interesting compounds. The most tantalizing aspect of the research is the realization that glycine, and other amino acids, may form in space clouds before the clouds condense into celestial bodies.

So these amino acids can be ready before the formation of their solar system. And then distributed throughout the universe by comets and such, potentially laying the groundwork to birth all sorts of ETs.[10]