“The citizens of Afghanistan, man and woman, have equal rights and duties before the law.”

Modest by Western standards, the above guarantee represented a “momentous change” when enshrined in the 2004 Afghanistan constitution. Never had Afghan law acknowledged the equality of men and women. Yet, before this, women’s rights had already begun to improve the post-Taliban rule, with the establishment of the Ministry of Women’s Affairs in 2001.

Fast forward to 2022, and the Taliban are again in power following a disastrous withdrawal of U.S. troops. Despite promising respect for women’s rights and international boundaries, many remain skeptical. The U.S. emphasized that the Taliban will be judged on their actions, not their words.

Sadly, in recent months, women’s rights have already come under attack. Here are ten ordinary activities that women in Afghanistan can no longer do—safely, without effort, or at all.

“I don’t think that women should be allowed to play cricket because it is not necessary that women should play cricket…[T]hey may face a situation where their face and body will not be covered. Islam does not allow women to be seen like this.”. These were the words of Ahmadullah Wasiq, deputy head of the Taliban’s cultural commission. In response, the Afghanistan Cricket Board initially suspended its girls’ program. Many sportswomen decided to go into hiding following the Taliban takeover.

However, a glimmer of hope appeared after officials later claimed that Wasiq’s words had been mistranslated. According to the Board Chairman, there is currently no official ban on women’s sports, including cricket. Nevertheless, female athletes no longer feel safe and face an uncertain future in Afghanistan. “Our only hope right now is to survive. Our future, as athletes, is unknown,” said 21-year-old Homaira Barakzai, captain of the national handball team.[1] 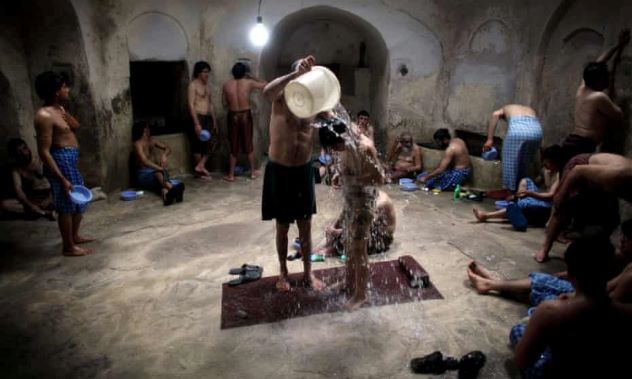 Well, women in Afghanistan have been banned from washing: in public at least. On January 3, Sardar Mohammad Heydari, from a local branch of the Taliban’s Ministry for the Propagation of Virtue and the Prevention of Vice, announced that women would be banned from public bathhouses in Balkh and Herat provinces. Women were also forbidden from using public bathhouses (hammams) during the Taliban’s previous rule from 1996–2001. Several bathhouses have already closed following the announcement.

This announcement could worsen the already dire humanitarian situation. In Herat, only 39% of neighborhoods have adequate access to water and sanitation. Tamana Siddiqi, a women’s rights activist, condemned the move stating that “People are dealing with growing economic pains…not everyone can afford a hot bath inside their house.” According to the Committee on Economic, Social and Cultural Rights, the “right to an adequate standard of living” in the UN Covenant on Economic, Social and Cultural Rights (which Afghanistan has ratified) includes the right to water.[2]

As under previous Taliban rule, women’s freedom of movement has been restricted. On December 27, the Taliban issued a directive requiring women traveling more than 72 kilometers (45 miles) to be accompanied by close male family members. The directive also requires drivers to refuse rides to women not wearing Islamic head or face coverings. The law purportedly prevents women from coming to any harm or “disturbance.”. However, many doubt that this law will achieve its aim, with one Afghan woman referring to an incident in 2015 when four women were kidnapped from their families at gunpoint.

In addition, the new law appears to breach the 2004 constitution, Article 39 of which states that “Every Afghan shall have the right to travel and settle in any part of the country….” In its 2020 “Freedom in the World” Afghanistan report, Freedom House awarded zero points for “freedom of movement” in Afghanistan, meaning it considers there to be no freedom in this respect.[3]

7 Choose What to Wear

As already noted, one of the primary concerns of the Taliban is women’s attire. In September 2021, the Taliban’s education minister announced that female students would be required to wear the hijab or head coverings as part of a compulsory dress code. It is currently unclear whether the niqab face covering will be mandatory, and there have been no national policies issued. However, in recent weeks posters have reportedly been put up around the capital of Kabul that “encourage” women to dress appropriately.

One of the most egregious Taliban restrictions against women is the one about seeking shelter. According to Human Rights Watch, about 87% of Afghan women and girls experience abuse in their lifetimes. This is despite the 2009 Law on the Elimination of Violence Against Women, signed by then-president Hamid Karzai. As recently as January 2021, a new Kabul-based campaign titled “Talk for Harmony” partnered with many professionals to provide services to domestic abuse victims.

Regretfully, such efforts were seemingly in vain. Since returning to power, most of the thirty domestic abuse shelters in Afghanistan have closed their doors at the Taliban’s request. Those still operating clandestinely are not taking new women. Such shelters are lifelines for women like Zari, an orphan beaten by her uncle’s widows and forced to work long hours. As a teenager, Zari attempted to commit suicide. The U.S. State Department estimates that around 2,000 women and girls have used the shelters each year.[5]

During their earlier rule, television, photography, and even the internet were banned by the Taliban, who asserted that Islam forbade pictures of living things. Those caught flouting these rules had their TV set smashed, and ownership of a video player could lead to public lashing. Post-Taliban control, women took to TV, launching careers as journalists and actresses. Leena Alam, one of Afghanistan’s best-known actresses, is a prime example of this resurgence.

Yet, since returning to power, the Taliban have again set their sights on the media. While not banning television outright, they have issued a new directive including eight “guidelines,” one of which bans screening of dramas and soap operas featuring female actors. The guidelines also ask female journalists to wear the hijab when reporting the news. Afghanistan’s once-thriving media scene is now a shell of its former self, with over 250 newspapers, radio, and TV stations having closed.[6]

The Taliban are notoriously opposed to educating women and girls. This was evident in the shooting of schoolgirl and activist Malala Yousafzai by the Pakistani Taliban in 2012. Therefore, it comes as no surprise that the Afghan Taliban are curtailing women’s education. Banned from attending school and university under previous Taliban rule, girls’ attendance at secondary school rose from just 6% in 2003 to 39% in 2017. Yet, with the return of the Taliban, many fear this work will be undone.

Upon return, the Taliban banned girls in grades six to twelve from attending school. This was claimed to be a temporary measure until a new education policy was announced. As of December 2021, girls remain barred from secondary in all but a handful of provinces. This is despite the return of school for boys. The Taliban also announced restrictions on higher education, with the Higher Education Minister confirming that universities will be segregated and veils made mandatory for all female students.[7]

Established in 2001, the Ministry of Women’s Affairs was founded with the mandate to “implement government’s social and political policy to secure legal rights of women in the country.” Despite a lack of influence and resources, the ministry reminded the government of its obligations under international human rights law to secure gender equality. In a further nod to women’s rights, the Afghan government also ratified the Convention on the Elimination of All Forms of Discrimination against Women in 2003.

However, almost immediately after the Taliban came to power, the ministry was shut down and replaced by the ministry for the “propagation of virtue and the prevention of vice.” This ministry is responsible for enforcing Islamic law and is known for severe punishment of minor infractions. Adding further insult to injury, employees of the Ministry of Women’s Affairs had to leave their building and make way for the new Taliban ministry, now situated there.[8]

Not content with curtailing women’s education, the Taliban has also sought to prevent women from working. According to a report of the United Nations Development Programme (UNDP), women made up 20% of the Afghan workforce in 2020, with a growing number of them running small businesses. Despite promising to safeguard women’s rights, many female employees have been told to stay home by the Taliban. In addition, women working in the public sector have been told to stay home “until procedures are in place to ensure their safety.” They are also required to be accompanied by a male family member in public.
h
The UNDP warns that restricting female employment may result in an immediate economic loss of between US$600million and US$1billion. Prior to the Taliban announcement, 27% of those employed by the Kabul city government were female. Now, however, these women are essentially barred from working. One of the only jobs women can do for the Kabul government is clean female bathrooms, which is deemed a “woman’s job.” Human rights organizations have condemned the move.[9]

In 2020, there were 108 media outlets in Kabul alone, comprising 4,940 employees. This included 1,080 female employees, 700 of whom were journalists. However, after the Taliban’s return, only 76 of the 510 women employed by the eight biggest media outlets remain. Officially, there is no ban on female journalism, the only restriction being to wear the hijab at work. But behind the scenes, fear and harassment reign.

In the provinces, female journalists have been forced to stop working after all private media outlets collapsed. Those who remained defiant and continued to work were harassed or worse. Nahid Bashardost, a report for Pajhwok, was beaten by the Taliban while reporting at Kabul airport. Meanwhile, other female journalists told of how the Taliban stationed guards outside their offices, preventing them from going out to report stories. Reporters Without Borders warned that “women journalists are in the process of disappearing from the capital.”[10]