While many know the infamous murders of children like James Bulger and JonBenet Ramsey, there are many more children who have suffered horrific deaths that have not received nearly the same media attention. This list serves to bring attention to those children so that their memories are not forgotten.

While most 10-year-old girls spend their birthdays blowing out candles and playing princess with their friends, that was not the case for Victoria Martens. Instead of Victoria opening up presents surrounded by friends and family, police officers in Albuquerque, New Mexico, would open up a smoldering blanket filled with Victoria’s dismembered remains.

When what little that remained of Victoria was autopsied, it was found that the little girl had been forcefully injected with methamphetamines before being raped, choked, and finally, stabbed. Her attackers then dismembered her, wrapped her in a blanket, and set the blanket on fire. As if that wasn’t devastating enough, it was discovered that Victoria had contracted an STD before her death, as her mother would let men rape her while her mother watched.

Shortly after her murder, Victoria’s mother, her mother’s boyfriend, and his cousin were arrested and charged with Victoria’s horrific murder. Tragically, the woman who gave Victoria her first birthday ten years earlier would also be the one to give the girl her last.[1]

Imagine being beaten to death because your older sister stole a bagel on Thanksgiving. That is what happened to 6-year-old Shaun Tara and his 3-year-old sister Delylah in November 2015. The two children and their unidentified 9-year-old sister were horrifically beaten, starved, and tortured in the years they spent living with their adult aunt, Tami Huntsman, and her teenage boyfriend, Gonzalo Curiel.

Huntsman herself admitted confining the children to a wet cement shower until all three contracted hypothermia. On the stand, Huntsman also admitted she intended to kill Shaun and Delylah in order to punish their older sister for stealing food that Huntsman didn’t believe the 9-year-old deserved to have. She also spoke in great detail of the intentional abuse she and Curiel inflicted on the children to satisfy their “sadistic” desires.

In a last act of complete disregard for human life, Huntsman and Curiel stuffed Shaun and Delylah’s bodies in a storage container in Redding, California, on December 14, 2015. In 2018, Huntsman pled guilty to premeditated murder and torture. Curiel was charged as an adult and was convicted and sentenced to life with the possibility of parole after 25 years.[2]

Arlington woman to be executed

Davontae Williams was an intellectually disabled child born to Marcela Williams in 1995. Within four years, Davonte and his infant sister would be taken from the house of his mother and her partner Lisa Coleman after Davontae was found with injuries to his head, back, mouth, and genitals. Within a year, Marcella was able to regain custody of her children when she swore to the court that she would not allow Coleman back into the home.

However, Coleman soon moved back into the home, and life for Davontae quickly deteriorated. Coleman would not allow the children to attend school, and on July 26, 2004, 911 operators in Arlington, Texas, received a 911 call reporting a child that was not breathing. When first responders arrived, they discovered that Davontae had been dead for hours before Coleman and Williams called 911. In addition to rigor mortis, responders also noted that Davontae, at nine years old, weighed only 35 pounds and was clad in a diaper.

Further, Davontae’s fragile body had over 250 visible injuries, including infected sores on his wrists and ankles from being bound and a tear where the ear attaches to the head from when he had been dragged by his ear. Both Coleman and Williams were charged with capital murder, which Coleman was found guilty of and sentenced to death. Coleman was executed by lethal injection on September 16, 2014. Williams pleaded to a lesser charge of murder and was sentenced to life in prison without the possibility of parole.[3] 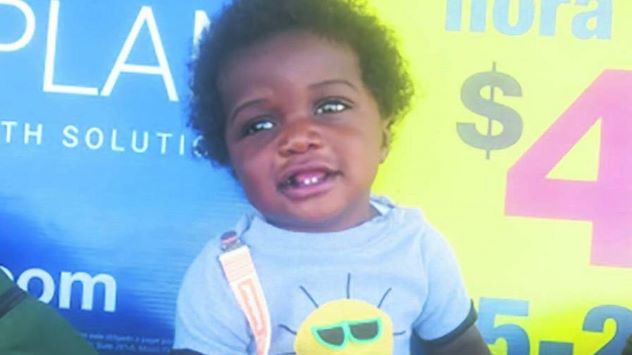 While there is no question that the social services system in America is overwhelmed with complaints, and not every complaint can be investigated promptly and thoroughly, one struggles to forgive the social workers involved in the case of Rashid Bryant. His caregivers had no less than 20 complaints of child neglect and abuse filed against them in the short 22 months Rashid was alive.

Even before his death, Rashid’s parents had broken his femur, broke ribs, and caused multiple cracks to his delicate skull. Horrifically enough, Rashid’s mother, Jabora Davis, would brag about the injuries she inflicted on the toddler, texting her sister that she had “beaten his ass.” Sadly, even though the abuse against Rashid was well documented, Rashid died at 22 months old on November 6, 2020, with his mother waiting over 83 minutes to call 911 after Rashid fell unconscious and began to foam at the mouth. As of March 2022, Rashid’s parents have pleaded not guilty to all charges and are awaiting trial in Florida. [4]

A woman was walking her dog in June of 2015 on Deer Island near Boston, Massachusetts, when she and her canine companion came across a disturbing discovery: a trash bag filled with human remains. Forensic tests would determine that the body was that of a 2-year-old girl whom the police dubbed “Deer Island Jane Doe.” Baby Doe would remain unidentified until September 2015, when she was finally identified as Bella Neveah Amoroso Bond, a toddler from Dorchester, Massachusetts.

Bella was identified after a neighbor noticed that Bella’s mother, Rachelle Dee Bond, had removed all toys and signs of Bella’s existence from her apartment. Rachelle and her boyfriend, Michael McCarthy, were eventually arrested for Bella’s murder. Rachelle told police that McCarthy had killed Bella one night when she refused to go to bed, and afterward, both she and McCarthy put Bella’s body into the refrigerator until they decided what to do with her body. They then decided to put it in a trash bag and dump it on Deer Island, where it was later found.

Rachelle eventually pled guilty to accessory after the fact, and McCarthy was sentenced to life in prison for second-degree murder. Perhaps the most devastating part of the case, however, was the fact that when asked about Bella, Bella’s maternal grandmother told police she had no idea her daughter had ever given birth to a baby daughter.[5]

While everyone is familiar with the infamous case of Munchausen-by-proxy perpetrator Dee Dee Blanchard, very few know the tragic story of Munchausen-by-proxy victim Olivia Gant. Olivia was born to Kelly Turner in 2010, and while she was born a healthy baby, her health quickly deteriorated. It reached the point that her mother requested that the Make-A-Wish foundation provide Olivia with her final wish, as she was facing imminent death from a multitude of maladies.

The Make-A-Wish Foundation immediately jumped into action to give Olivia one last adventure before she died, and the community rallied in support of the little girl and her loving mother. When Olivia passed away in 2017, the community provided endless support for Kelly Turner, who stated that Olivia had died of several different terminal illnesses. End of story, right? Except it wasn’t.

Police began to get suspicious about the circumstances of Olivia’s death. After her body was exhumed and showed no signs of any medical condition whatsoever, Kelly Turner was arrested and charged with first-degree murder. It turns out that Kelly Turner had been making her own daughter sick and had willingly let her die a long, agonizing death. Kelly pled guilty to lesser charges, and as of 2019, she faced a sentence of 16 years.[6]

Keyontae Holzendorf was only eight years old when he was found dead in a seedy motel room in Houston, Texas. Keyontae was bound and gagged, handcuffed, and brutally beaten to death by the one person who was supposed to protect him: his own mother, Kayla Holzendorf.

Kayla, along with her boyfriend Dominique Lewis, bound Keyontae’s limbs and stuffed a gag in his mouth before beating him so severely that he choked on the blood from his broken teeth. His body was covered in intentionally inflicted injuries, including large pieces of skin missing from his thighs. Harris County District Attorney Kim Ogg said of Keyontae’s death, “The way this little boy died is almost unthinkable and absolutely horrifying.” As of February 2022, Kayla and Dominique are being charged with capital murder. [7]

In a disgusting attempt to use racism to deflect guilt for the murder of her 9-year-old son Alejandro, a Florida mother blamed “two black men” for abducting her autistic son, Alejandro, in May of 2020. Patricia Ripley, who described herself as a white-Hispanic woman, called the police to report that her son had been kidnapped by two black men. Police immediately jumped into action, but when Patricia’s story began to develop glaring holes, police grew suspicious and began to investigate Patricia herself.

Less than 48 hours after Patricia reported her son missing, she was arrested and admitted to lying about the kidnapping. Sadly, Patricia admitted to drowning Alejandro in a canal, telling police that he was “going to be in a better place.” Tragically, Alejandro’s body was recovered in the water of a golf course clad in a Captain America t-shirt. As of this writing, Patricia Ripley is still awaiting trial.[8]

“I just killed my son.” “What do you mean you just killed your son?” “I’m hearing voices.” Those were the chilling words a 911 operator heard on an ordinary Thursday afternoon in March 2021. Matthew Ponomarenko of Parma, Ohio, had just ruthlessly beaten his 5-year-old son with a baseball bat in the living room of the family’s home. His son, Jax, had autism and was described by his family as a vibrant spirit who lit up a room.

However, records would show that Child Protective Services had visited the Ponomarenko home multiple times since 2017, with Ponomarenko pleading guilty to child endangerment that same year. Sadly, even with this conviction and a stint in a behavioral health facility, Jax was left alone with his father and suffered a terrible death.[9]

Perhaps the most disturbing murder on this list is that of 19-month-old Paul Booth, who was brutally murdered by his stepfather, David Dearlove. Paul was found semi-conscious on his bedroom floor shortly after Dearlove put him to bed one fateful night in 1968. Paul was taken to the hospital, where he soon passed away.

Dearlove, who was 21 at the time, said that he had no idea what happened to Paul, as he had only “shaken him a little bit,” which Dearlove said he did every night before throwing Paul onto his pillow. The truth, however, was much more sinister. After almost 50 years of denying his part in Paul’s death, Dearlove was finally charged with Paul’s murder in 2015.

The charges stemmed from Paul’s brother Peter, who was only three at the time of his brother’s death. Peter went to the police to tell them the horrifying events that led to his brother’s death all those years ago. He said that when he was three years old, he watched his stepfather take Paul by his legs and swing him like a bat into the brick fireplace. Dearlove then laid Paul in his bed, where three-year-old Peter attempted to give his baby brother CPR. Peter was threatened never to tell anyone what he saw. However, Peter did tell people what he saw, and after 50 years, Paul Booth received justice when Dearlove was convicted and sentenced to life in prison.[10]