Football (or soccer, to you Americans) was first invented in 1863—that’s nearly 160 years of the beautiful game. In that time, we’ve seen the good, the amazing, the ugly, and the downright weird. Many football-holics may believe they’ve seen everything there is to see, only for an event on or off the pitch to capture a sense of awe and amazement—or just a sense of disbelief.

This list compiles 10 of the moments in the world of football where fans have had no option but to say “huh?” and rub their eyes in amazement. These are the 10 weirdest things to have happened in the history of the beautiful game.

It is not uncommon for fans to berate the referee after a few poor decisions, but it is a little less common for fans’ protestations of “Is the ref drunk?” to hold any weight, let alone be potentially true. This was the case in a 2008 Belarusian Premier Division match between Vitebsk and Naftan. The referee in question was Sergei Shmolik (who, coincidentally, was voted as Belarus’s best ref in 2007). According to reports, he spent most of the time hurled over, staggering around the pitch and refusing even to watch the events of the match unfold.

Claiming his actions were due to a “bad back,” Shmolik was unceremoniously suspended by the Belarus FA after being dragged off the pitch by the linesmen. He was found to have very high levels of alcohol in his system, and suffice to say, he has never refereed a professional game again. Turns out there is a time and a place not to act like a drunk uncle.[1]

The Unique History of the First World Cup – 1930 World Cup

At the 1930 World Cup in Uruguay, a semi-final match between Argentina and the USA descended into chaos. The U.S. coaches were frustrated at the “rough house tactics” of the Argentinians, who were kicking and hacking down the Americans all over the pitch. After a particularly bad incident, the coaches had had enough, venting their anger. Now, under any other circumstance, this may not have been too bad or shocking. After all, the early World Cups were synonymous with angry players, coach remonstrations, and badly-behaving fans.

But the issue wasn’t with the angry coach. As part of his job, Jack Coll, a trainer, raced to the downed player, throwing his medical bag to the ground in his rush. However, in this instance, the act of throwing the bag to the ground cracked open a bottle of chloroform and bizarrely knocked the trainer out. He, not th einjured player, had to carted off on a stretcher. And it was not only him who was knocked out—the U.S. proceeded to lose the game 6-1.[2]

When a beach ball scored against Liverpool

In one of the most bizarre goals in history, Sunderland striker Darren Bent could hardly believe his luck when a tame effort from 18 meters (20 yards) out somehow found its way into the back of Liverpool keeper Pepe Reina’s net in 2009.

The striker, signed from the Spurs for $22 million in the summer, turned on the edge of the box and unleashed an average shot that should have been comfortably collected by Reina. Only—it wasn’t. Unbeknownst to Bent, fans behind the goal had thrown a Liverpool-branded beach ball onto the pitch. Bent’s strike would have ended up in the mid-left of the goal, but the massive deflection it took from hitting the beach ball meant it cannoned off to the right and past a dumbfounded Reina.

Both teams, and both sets of fans, were dumbstruck. It wasn’t until the referee shrugged and pointed to the center circle was the goal actually cheered by the traveling Sunderland fans. A complete moment of madness.[3]

Perhaps the most infamous incident in the flamboyant Frenchman’s storied career, the Kung-Fu kick then-Manchester United player Erik Cantona launched at Crystal Palace fan Matthew Simmons remains one of the weirdest events in Premier League history. Accounts of the event are contested, with Cantona claiming he had been racially abused. At the same time, Simmons protested that he had only shouted, “It’s an early bath for you, Cantona!”

Either way, something inside Cantona snapped, and he launched himself over the advertising hoardings to aim an amazing two-footed WWE-style dropkick to Simmons’s chest. After a lengthy investigation, he was banned for eight months and forced to serve 120 hours of community service. A moment of insanity that represented nothing less than what we’d expect from “Erik the Red.”[4]

It is every football fan’s dream to stroll out in a big stadium, side by side with some of their idols. For Karl Power, this is exactly what happened in April 2001. Power, an unemployed metalworker from Manchester, managed to evade security at Bayern Munich’s Olympic Stadium to walk out into the floodlights with the Manchester United team. He even posed with the team in the pre-match photo!

Gary Neville, the Manchester United right-back, eventually noticed and had him removed. But Power had managed to do what every football fan wants to do—brush shoulders with some of the best players in the world. Absolutely amazing.[5]

Now, this isn’t something that we would expect to see again. Greek owner of POAK Salonika, Ivan Savvidis, took the concept of “power trip” to a whole new level when he protested a goal that was ruled out for offside in 2018.

He stormed the pitch to confront the linesman and referee but was spotted carrying a gun on his hip. The opposing team, AEK Athens, left the pitch in fear of their lives, and the entire league was suspended in the wake of his actions. He was barred from attending matches for three years, and POAK was docked three points. If only offside wasn’t a thing…[6]

Villa manager Steve Bruce found his new job in 2018 particularly hard. This wasn’t just due to poor results on the pitch, but also due to the actions of fans off it. A poor start to the season left many supporters disgruntled. One, in particular, decided it was best to take their actions out on the manager.

Bruce was clattered by a cabbage—yes, a cabbage—while standing in his dugout. The perpetrator was never found or prosecuted, and Bruce’s dignity was significantly tarnished. He left Villa at the end of the season. Ouch, all around.[7] 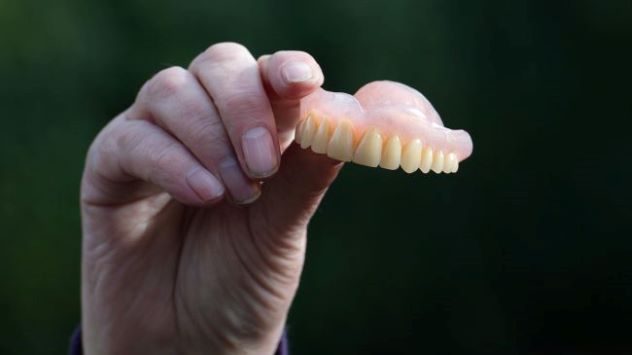 This entry comes from Norway—all the way back in 1957—from a match between Norager and Ebeltoft. Norager was leading 4-3 with a few minutes to go; the team was clinging on desperately despite the attacking onslaught from Ebeltoft. They were clinging on and still clinging on long after full time was meant to have been called. When the referee, Henning Erikstrup, went to blow the whistle to end the match five minutes earlier, he lost his false teeth.

Play continued while he tried to pick up his teeth, and Ebeltoft did indeed equalize before he managed to find them and blow the whistle. However, Erikstrup—who did not see the goal as he was too busy trying to find his chompers—was forced to rule it out because it technically should not have counted. Madness.[8]

In a 2019 English Championship match between Leeds United and Aston Villa, Leeds took the lead after Mateusz Klich scored a controversial goal. While Villa players were expecting Leeds to kick the ball out after one of their players was injured on the pitch, Klich did not stop and ran from the halfway line to score.

The repercussions of this came instantly, with Villa players and staff rushing onto the pitch to confront the player and the referee. The Leeds manager, Marcelo Bielsa, clearly empathized with the complaints as he forced his team to let Villa score the goal that drew the scoreboard. A rare piece of sportsmanship, yet an act of compassion that did not sit well with the home fans.[9]

Perhaps the weirdest moment in football history goes to the biggest fraud in football history. In 1996, Southampton and Graeme Souness made the worst signing of all time when they signed Ali Dia, a “Senegalese international” allegedly recommended to the Saints by former Ballon d’Or winner George Weah. Or at least that’s what they thought. “Weah” turned out to be Dia’s roommate from his university days.

Believing they were about to sign a massive hidden gem, Southampton landed him in 1996 and even got him to play one game. Bear in mind, again, that Dia had never played a match of professional football in his life. He “pranced” about on the pitch like a horse for 10 minutes, in the words of Souness, and was substituted early in the second half. A success story for Dia and a moment of red-faced embarrassment for Southampton.[10]