We all know about the Titanic. Most of us remember the Lusitania. Some of us sang about the Edmund Fitzgerald. But those are just a few of the thousands of similar shipwrecks and sinkings throughout maritime history that litter the seafloor, and every shipwreck is the end of a story. But even when Davy Jones claims a vessel for his locker, its story still makes it to port. Here are 10 of those stories.

Here are ten notable ships from history that were tragically wrecked, sank, or otherwise lost.

The Vergulde Draeck (Gilt Dragon) was a trading ship owned by the Dutch East India Company, constructed in 1653. She had been in operation for only three years when tragedy struck off the coast of Western Australia. During a freight haul from the Cape of Good Hope to Batavia, Indonesia (now known as Jakarta), a submerged coral reef split the hull and forced the crew to abandon her. An estimated 185,000 guilders (silver coins) and other cargo—the equivalent of €2,412,500 today – were lost in the wreckage.

Only 75 of the crew of 193 survived and made it to shore. The ship’s lifeboat and some provisions were also salvaged, so seven of the 75 survivors returned to sea to sail to Batavia for aid. They made it to their destination after 41 days. Rescue ships were then sent to recover the remaining survivors and cargo, but they all failed to find any trace of the wreck or the survivors’ camp. As a result, the Dutch East India Company ceased sending rescue expeditions after three years of failure, and the wreckage would not be discovered until 1963.

The Fremantle Maritime Museum in Australia now houses some of the artifacts pulled from the wreckage, but not all of the silver has been found.[1]

The SS Vaitarna was a British steamship that operated in coastal India in the 1880s, transporting passengers between the coastal cities of Mandvi and Mumbai (then Bombay). She was known informally as the Vijli or the Haji Kasam ni Vijli, after the ship’s owner and captain Haji Kasam. “Vijli” was the Indian word for electricity, after the then-novel electric lights that lit the deck.

During a routine passenger voyage, the Vaitarna left the port of Dwarka with approximately 700 passengers on board. The ship’s normal route would take her to the port of Porbandar next, but rough seas and a warning from the port authority left her unable to reach port. She instead sailed on to its next stop in Mumbai but never made it. No trace of the ship—debris, survivor, or casualty—was ever discovered.

The disaster became a cultural flashpoint in the region, being retold and mythologized in stories and folk songs, and is today known as the “Titanic of Gujarat” despite predating the sinking of the Titanic.[2]

The Boyd was a British brigantine that operated during the late 18th century, sailing between London and the West Indies. Most of the ships on this list are better-known today for the circumstances of their sinking than for their active service hauling freight, but the Boyd holds the dubious honor of having her name better remembered as a disaster than as a ship.

The Boyd met her final, gruesome fate in New Zealand in an incident now remembered as the Boyd Massacre. While anchored at a harbor in Whangaroa, she was waylaid by Māori warriors. The attackers killed and cannibalized nearly the entire crew and looted the cargo of the Boyd. During the altercation, the ship’s supply of gunpowder was accidentally ignited, killing ten of the assailants in the initial explosion and setting fire to the ship.[3] 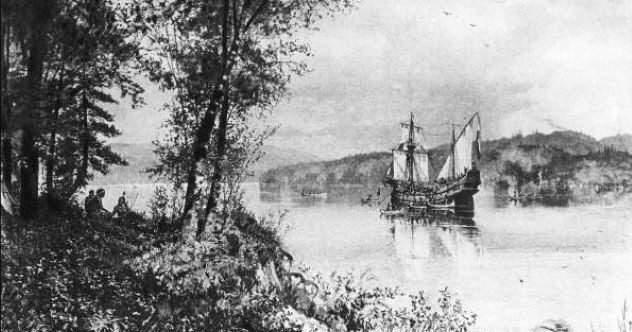 The Tryall was another British cargo ship that departed on her maiden voyage from Plymouth to Bantam in 1621. She stopped at the Cape of Good Hope for supplies. This is where the captain learned that all East India Company ships had recently been ordered to sail south of 35° when traversing the East Indies. This route had been proven safer and would cut up to six months of travel time off the previously established route/ However, the Tryall’s captain was unfamiliar with this route. He attempted to recruit a mate at the Cape of Good Hope who knew the route better but failed to find anyone.

The Tryall attempted the route but ended up too far east and struck rocks. The crew was forced to abandon the ship, and a longboat of 36 survivors made it to the Montebello Islands. They stayed there for a week before setting back out to sea, eventually making it their original destination in Bantam. That boat of survivors is now recognized as the first Europeans to make landfall in Australia.[41] 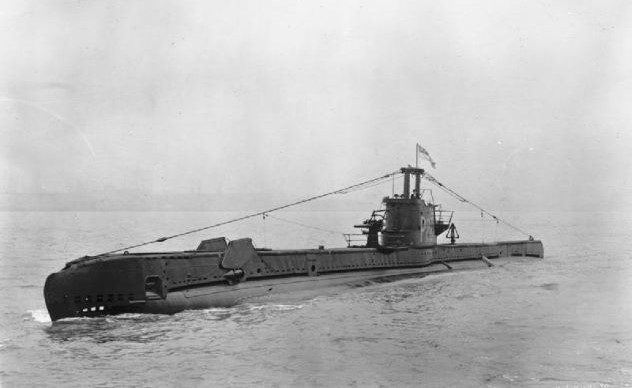 The HMS Sickle was a World War II Royal Navy submarine, active primarily in the Gulf of Genoa and the Aegean Sea. After launching into active service in 1942, the Sickle was engaged in a number of military movements and was confirmed to have sunk a total of ten Axis ships, including three minesweepers and a German submarine.

The Sickle left the harbor at Malta on May 31, 1944. On June 4, she was engaged in combat at the surface, and one crew member was washed overboard by a wave and captured by Axis forces. The Sickle survived the encounter, but the captured sailor would ultimately become the Sickle’s sole survivor, as the skirmish was the last confirmed sighting of the Sickle. The Sickle’s last signal, on June 12, 1944, stated that she had spotted an enemy convoy near Steno Pass. The convoy is recorded as having dropped two depth charges but is not believed to have sunk the Sickle with them.

Over the next few weeks, a few Greek fishing boats were sunk by or sighted a submarine matching the Sickle’s description, but the Sickle never returned to harbor. Today the Sickle is believed to have hit an undersea mine and sunk with no survivors, but no evidence of the wreck was ever found.[5]

The Santo Antonio was a Portuguese ship personally owned by King John III of Portugal. She sank in a storm off the coast of Cornwall in 1527, killing 41 of its crew of 86. The wreck of the Santo Antonio was remembered chiefly due to the value of her lost cargo—primarily a load of copper and silver ingots worth about £18,000 at the time (approximately £100 million in early 21st-century values).

The salvage of the cargo quickly became the subject of an international dispute between Portugal and England. While King John III and King Henry VIII of England both agreed that the cargo should be returned to Portugal, this ran contrary to established English manorial rights at the time. Three prominent Cornwall landowners improved their status significantly in the years that followed the wreck and are assumed to have profited from salvaged treasure. Still, because of the difficulties of salvaging a sunken ship’s cargo, it could never be proven how much of the original treasure remained on the seafloor.[6] 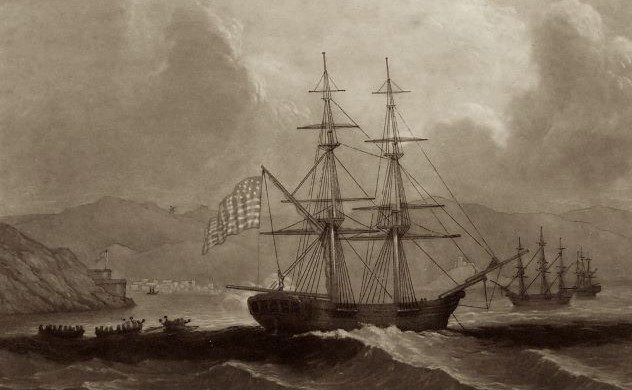 The Nancy was built in Wilmington, Delaware, in 1775, originally as a British cargo transport. When America declared independence, the Nancy was newly chartered as an American ship to transport gunpowder and weapons for the American Revolution. As a result, the Nancy holds the distinction of being the first ship to raise an American flag in a foreign port, a claim supported by the fact that she was recorded as destroyed on June 29, 1776—after the Second Continental Congress resolved to declare independence but before the official declaration on July 4 of that year.

The Nancy ran aground in fog while fleeing a pair of British warships in the summer of 1776. Its crew salvaged as much of the cargo as they could, then set a fuse to ignite the ship’s gunpowder in order to scuttle the ship and keep it out of British hands. The crew removed the American flag and brought it with them as they abandoned the ship. The British mistook this as a gesture of surrender and were in the process of boarding the Nancy at the time of its explosion.[7] 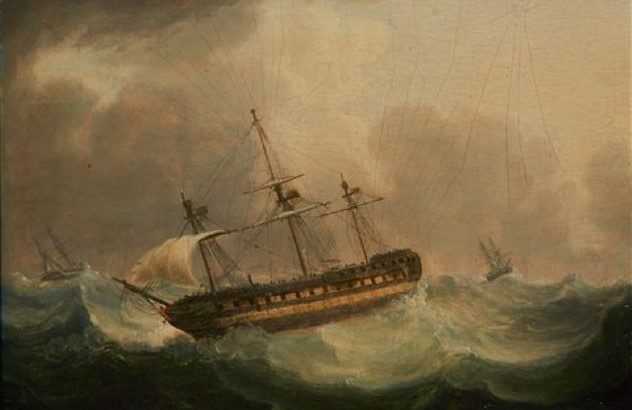 The HMS Harrier was a British Cruizer-class sloop that served in the British Navy in the early 1800s. She launched in 1804 and was lost in 1809, having participated in numerous naval battles at the time.

The Harrier is the only ship on this list whose final fate is still unknown to this day. Its last known position was about 1,000 nautical miles from the island of Rodrigues in the Indian Ocean. It had been traveling in the company of the HMS Racehorse but lagged behind and eventually fell out of the Racehorse’s view. She was presumed sunk with no survivors, but no wreckage has ever been recovered, and no explanation for what could have sunk her has been uncovered.[8]

The U-3514 was launched in October of 1944 and commissioned that December, but by this point, the war was nearly over. She was harbored at Bergen, Norway, in reserve to await a call to action that never came. Only five months later, in May 1945, the Axis surrendered the U-3514 to the Allies, who harbored her in Lisahally, Ireland.

The Wreck of the Whydah Gally

The Whydah Gally was originally commissioned in 1715 as a heavily armed passenger/cargo ship to transport goods in the African slave trade. However, she had yet to complete the triangle of her maiden voyage when she was pursued and captured by the pirate Black Sam Bellamy, thus beginning the Whydah’s far better-known career as a pirate ship.

Bellamy tormented the Atlantic coast of America, capturing smaller vessels and assembling a pirate fleet before ultimately running aground and capsizing off the coast of Chatham, Massachusetts. Only nine of the crew were recovered alive—six of whom were tried and convicted of piracy.

The Whydah’s wreckage was discovered in 1984 and has been in a state of perpetual recovery ever since. The recovery of the ship’s bell, stamped with “THE WHYDAH GALLY 1716,” positively identified the wreck and made it the only fully authenticated sunken pirate ship ever to be rediscovered. Today, artifacts from the wreck site, including the bell and a chest of silver coins, form the cornerstone of the Whydah Pirate Museum in West Yarmouth, Massachusetts.[10]