We often hear about famous paintings and other works of art that turned out to be fake. By some estimates, as much as 20% of the art in museums is actually fake. But it also happens the other way around, and a painting that was thought to be a replica or copy turns out to be authentic.

Here are ten famous examples of fakes that turned out to be real.

Rembrandt is considered by some to be the king of selfies, or self-portraits, having painted nearly 100 over his lifetime. Now it turns out that a self-portrait owned by the National Trust in the United Kingdom, long thought to be a copy, is actually the real thing. Like other works considered to be fake, it had been left in storage for a long time until it caught the interest of an expert. In this case, it was Rembrandt expert Ernst van de Wetering who saw the painting in person in 2013.

After months of testing, analysis, and restoration, experts at the renowned Hamilton Kerr Institute have determined that the work was indeed painted by the Dutch master. Experts removed several layers of yellow varnish, which revealed the original colors and details that are in line with Rembrandt’s painting style. Close analysis also confirmed the signature to have been made at the same time as the painting, a point that had been in doubt before.[1]

9 Rembrandt’s Portrait of a Young Woman

Another Rembrandt was authenticated during conservation work. The Allentown Art Museum in Pennsylvania has owned the Portrait of a Young Woman since 1961, when it was bequeathed to the museum. Originally thought to be a work by Rembrandt, it was declared a copy in the 1970s, believed to be painted by one of Rembrandt’s assistants. After recent conservation work, it turns out those experts were wrong, and the painting was an original Rembrandt after all.

In 2018, the painting was sent to NYU for conservation and cleaning. During that process, a thick layer of varnish was removed, revealing the original, delicate brushwork and color consistent with the Dutch master’s work. Conservators also used X-ray and new imaging technology to confirm that the painting was a genuine Rembrandt. Outside experts also agreed with NYU that the painting is real. a href=”https://www.npr.org/2020/02/19/807488140/the-rembrandt-that-was-fake-then-real-again” rel=”noopener noreferrer” target=”_blank”>[2]

For nearly 100 years, a Van Gogh collected dust in an attic. Purchased by a Norwegian collector in the early 1900s, it was hidden away when the collector was told that the painting was a fake. The current owners had the painting reviewed by the Van Gogh Museum in 1991 after their purchase and were told then that it was a fake. However, using new technology, the Van Gogh Museum reversed its opinion in 2013.

Experts were able to match the pigments in the paint, as well as the canvas used, to other works by Van Gogh during the same period. The numbering on the back of the canvas also matched an inventory list of Van Gogh’s paintings. And last but not least, Vincent Van Gogh had written to his brother, Theo, about this exact painting. Taken together, the evidence was conclusive that Sunset at Montmajour is a genuine Van Gogh. It was painted in 1888, when Van Gogh lived in Arles, France, during the same period when he created famous works such as Sunflowers.[3]

7 Botticelli’s Madonna of the Pomegranate

Conservators used several techniques to confirm the authenticity of the painting, including stripping back a thick layer of varnish and dirt, X-rays, and infrared tests. They also noted that the painting was of the right period and painted on a common material from that time. After consulting with experts at the Victoria and Albert Museum and the National Gallery, the conclusion was that the painting did, in fact, come from Botticelli’s Florence workshop.

Whether the work was painted by Botticelli himself, however, will never be known, as Botticelli employed several assistants to help him with his work, which was in high demand during his lifetime.[4]

6 Monet’s A Haystack in the Evening Sun

The Getty Museum discuss another…

Using new technology, researchers at a university in Finland have been able to confirm the authenticity of a Monet painting. The painting, A Haystack in the Evening Sun, has been owned by Finland’s Gösta Serlachius Fine Arts Foundation for more than 60 years. Although the foundation suspected it was a Monet, they couldn’t prove it because the painting lacked a signature. Until the technology caught up.

Researchers at the university used a special device to identify the painting’s elemental composition. They also uncovered Monet’s signature and the date of the painting, 1891, which had been buried beneath a layer of paint. It’s unclear why Monet decided to paint over his signature. But the signature is proof that he painted the work, which now fits into a broader series of “Haystack” paintings. It also makes this painting the first Monet to be held by a public collection in Finland.[5]

In 2013, the Metropolitan Museum of Art in New York sold off a painting, Portrait of a Yong Girl, Possibly Clara Serena Rubens, to raise funds to buy more works of art. They believed the painting to be by a follower of Rubens and not the Flemish master himself. It turns out they may have been wrong about that.

Several prominent Rubens scholars have since confirmed that it’s a real Rubens. This included the director of the Rubenshuis, a museum in Antwerp dedicated to the works of Rubens and his contemporaries, as well as Ruben’s former house and studio. The Rubenshuis is also showing the painting as part of a special exhibit.

However, not all experts are convinced, including the Metropolitan Museum of Art and David Jaffe, a Rubens expert and former curator at the National Gallery.[6] 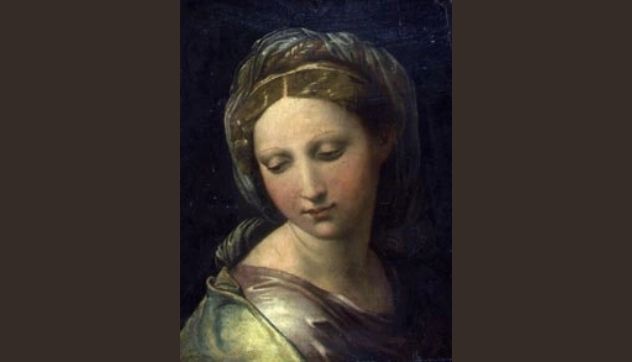 For more than 40 years, Raphael’s Young Woman sat in the basement of an Italian palace, thought to be painted by an unknown artist after the great Renaissance painter’s death and practically worthless. Then in 2010, art expert Mario Scalini started sorting through the palace’s extensive art collection and came across the painting, set in a very elaborate and ornate frame.

After a closer inspection, Scalini suspected the painting might have been painted by Raphael himself and sent it off to a research institute in Pisa. There, experts used infrared and ultraviolet technology to “see” through the different layers of paint. They confirmed that the painting was a genuine Raphael.[7]

Art expert Philip Mould was always convinced that an early The Hay Wain painting that he owned had been painted by John Constable. Unable to prove it, however, he sold the painting in 2000 for £35,000.

In 2017, Mould co-hosted BBC’s Fake or Fortune? show, which had the painting analyzed by experts in Los Angeles. Using advanced technology, the experts were able to prove that the painting was a genuine Constable. It was painted around the same time, offering a different view of Willy Lott’s cottage as his famous The Hay Wain, which had been voted one of the most popular paintings in the UK. Experts were also able to trace the provenance of the painting to a sale by the famous painter’s son.

While Mould missed out on a large windfall, he was more than happy to be finally vindicated in his belief.[8]

Philip Mould and BBC’s Fake or Fortune? show helped authentic another set of paintings. This time, it was three paintings by famed British landscape artist JMW Turner: The Beacon Light, Off Margate, and Margate Jetty.

In 1951, Gwendoline and Margaret Davies left several paintings by Turner to the National Museum Wales. A few years later, these three paintings were declared to be fakes and removed from display.

The paintings were reexamined in the 1960s, 1970s, and 1980s, with the same conclusion. It wasn’t until the BBC show conducted a new investigation, using technologies developed recently, that the result changed. This time, with the use of modern technology, experts were able to conclude that these paintings were, in fact, by Turner himself. This conclusion was also validated by a more in-depth look at the provenance and history of the paintings, as well as further consultations with Turner experts.[9]

Rodin’s Bust of Napoleon | A Masterpiece Hiding in Plain Sight

For years, a bust of Napoleon sat in the corner of a borough council meeting room in New Jersey. It wasn’t until 2014, when they hired a college art history student, Mallory Mortillaro, to archive their artwork, that they discovered that the bust had been made by none other than renowned French sculptor Auguste Rodin.

Mortillaro noticed a faint signature on the bust but didn’t have much luck otherwise confirming whether it was real or not. So she contacted the Comité Auguste Rodin in Paris, a group that could determine its authenticity.

Jerome Le Blay, head of the committee and a Rodin expert, was able to confirm that the bust was real after he traveled to New Jersey to view it. They even had a photograph of Rodin with the bust, but the bust had seemingly disappeared until recently. It turns out it had been in a corner in New Jersey all along.[10]