At first glance, all asteroids look the same and don’t get much attention unless one destroys modern life in a movie. In reality, these ancient space mountains still surprise astronomers with their origins, bizarre behavior, and effects on the planets. In recent years, science has identified unique traits, devastating weather, and amazing individual rocks not even the experts could have predicted. 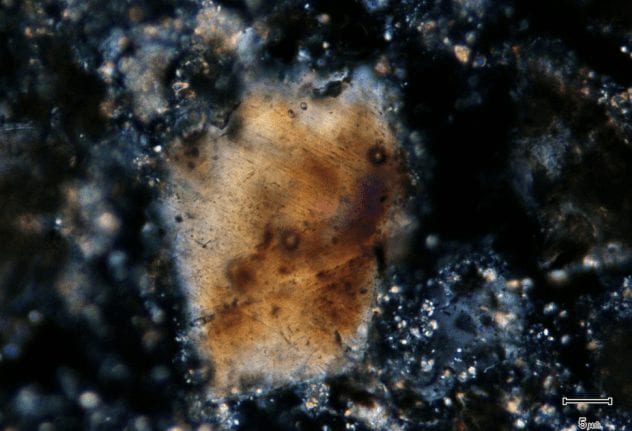 In 2016, researchers were looking to study cosmic impacts on other worlds. To do this, they chose the Chicxulub crater in Mexico’s Yucatan Peninsula. Said to be the footprint of the asteroid that bumped dinosaurs off the face of the Earth, the crater had one trait that made it useful to study impacts on other planets.

So-called “peak rings” are tall hills circling the center inside of major craters. They exist across the solar system but in only one place on Earth: the epic crash that left an impression 180 kilometers (110 mi) wide across the Yucatan Peninsula. The 65-million-year-old scar was a rare opportunity to study the origin of these structures and revealed how asteroids are capable of violent and dramatic landscaping.[1]

The force of the collision almost pierced Earth’s crust and caused the soil to behave like a thick fluid. Within minutes, deeply buried granite shot up like a water drop following an object dropped in liquid. The rising center reached the height of about 15 kilometers (9 mi) before collapsing downward and outward into a ring of peaks. 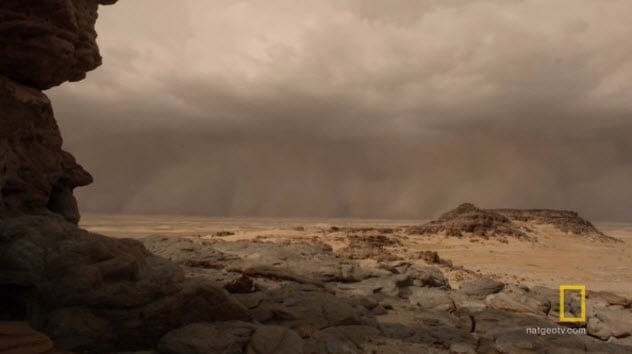 Asteroid impacts can whip up extreme weather and not just on Earth. In this case, they spawned frightening tornadoes on ancient Mars. Scientists first became aware of this when they studied NASA images and found strange streaks.

The streaks scoured the surface near large craters and were only visible in thermal infrared during Martian nights. A simulated environment was created in a laboratory to find out what caused these unusual surface lines.

Turns out, an asteroid would hit the red planet once in a while. After the asteroid vaporized itself and tons of material from the surface, air was forced from the crater at supersonic speed. Traveling at more than 800 kilometers per hour (500 mph), these plumes surfed just above the surface.[2]

Wherever the flow encountered any raised geography, it created funnels with the strength of an F8 tornado. These scattered storms were responsible for the unusual streaks, leaving trails as they stripped the ground bare. This type of wind phenomenon on Mars is unique to asteroid arrivals and won’t occur again until the next one hits. 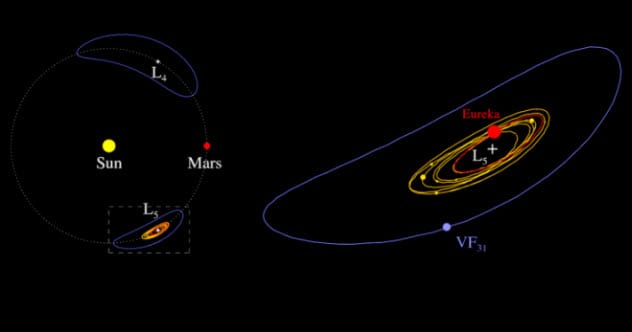 Mars has several companion asteroids that share its orbit. Called Trojans, they come in so-called families that drift around other planets as well, notably a group of 6,000 near Jupiter.

Mars Trojans are unique. So far, nine have been discovered and are the only ones in a stable planetary orbit. They also group together in a way that’s repeated nowhere else in the solar system.[3] Eight keep the same distance from Mars and form the “Eureka family,” named for the asteroid at the nucleus of the cluster.

In 2016, scientists wanted to determine if a common link existed between them and used a spectograph to study three, one being Eureka. By studying the colors that sunlight reflects across the asteroids’ surfaces, their chemical composition could be determined.

The color spectrum turned out to be identical, which is rare enough among asteroids. But even more uniquely, they consisted mostly of olivine. This mineral is evidence that the group is likely ancient remains of the inner mantle of a mini-planet destroyed eons ago. 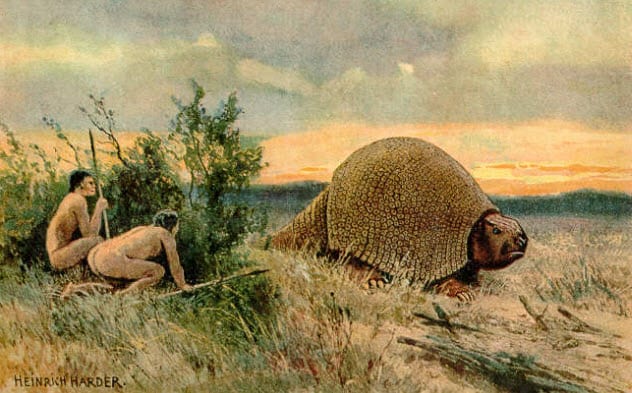 When researchers found an abnormal amount of platinum at sites belonging to the Clovis culture, they realized that a long-standing mystery was possibly solved. Around 12,800 years ago, the Clovis Paleoindians suddenly vanished along with over 35 species of Ice Age animals, including the mammoth and saber-toothed tiger.

Scholars aren’t exactly sure why this happened. The unnaturally high deposit of platinum suggested that an impact could be behind it. The scarce metal showed up at 11 archaeological sites linked with the Clovis culture in California, Arizona, New Mexico, Ohio, Virginia, North Carolina, and South Carolina.

Earlier, in 2013, another team found platinum-enriched ice in Greenland dating back to the “Young-Dryas” period. During this era, temperatures mysteriously plummeted and lasted for 1,400 years. It also began around the same time that the Clovis culture disappeared.[4]

While rare on Earth, platinum is abundant in comets and asteroids. All research points to an extinction event that hit North America. Most likely, fragments from a comet or asteroid caused disaster, such as the climate suddenly cooling, on a continental or even global scale. 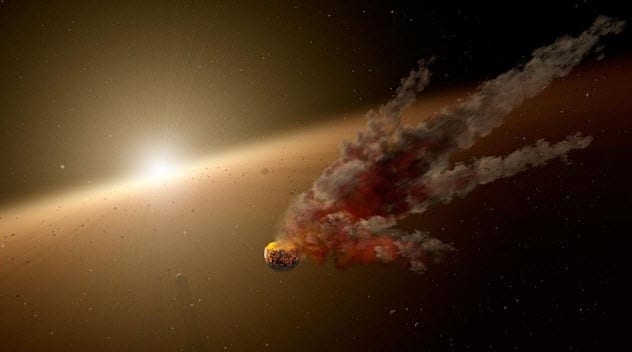 Earth gets bombarded with around 100 tons of extraterrestrial objects on a daily basis. Luckily, most are microscopic and burn up in the planet’s atmosphere. Those that reach the surface are mostly rocky meteorites called chondrites. Depending on which ancient collision event they were born from, they are classed H, L, or LL. At the moment, the vast majority are types H and L.

To find out what kind of space “rains” occurred on Earth in the distant past, researchers traveled to Russia. Near St. Petersburg exists an area with a rich buildup of such materials dating back to antiquity. Hundreds of samples were taken and chemically tested to determine their type.[5]

Surprisingly, they found a barrage of L-chondrites starting around 466 million years ago. This particular shower is currently still going strong. It began with what must have been an impressive impact involving an asteroid somewhere in the solar system. The resulting fallout on Earth was so thick that it dominated the geological record for a million years, to the point of covering up all other impacts. 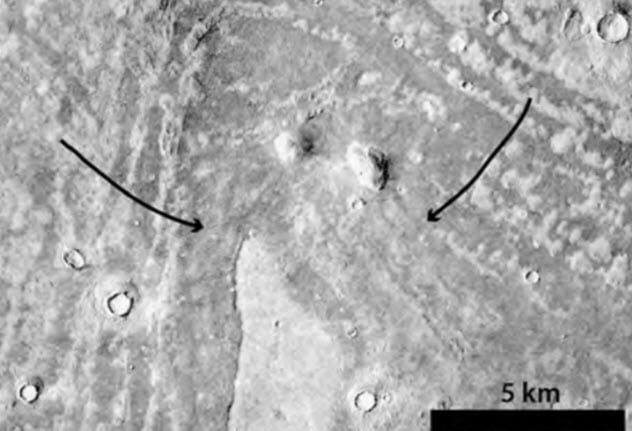 A theory suggesting Mars once had water recently received dramatic backup—signs that tsunamis raged across the red surface. Where there are tidal waves, there are oceans, and one probably existed on the northern plains of Mars.

Some three billion years ago, an asteroid hit the area and scooped out the Lomonosov crater, measuring 70 kilometers (43 mi) in diameter. After studying the formations of the landscape, it was determined that a pair of giant tsunamis was forced from the crater at 60 meters per second (197 ft/sec).

The first was 300 meters (985 ft) high and reached land within a few hours. The size, speed, and power of the waves would have been monumental. Tsunamis leave their mark on shorelines, and researchers found these typical deposits at what would have been a Martian beach.[6]

Nearby was another distinctive ground pattern called a thumbprint terrain, which occurs when one set of tsunamis bounce back from the shore and smash into a second set. There’s no other way to explain the evidence other than assuming Mars had a northern ocean that got hit by an asteroid, which then sparked devastating tsunamis. 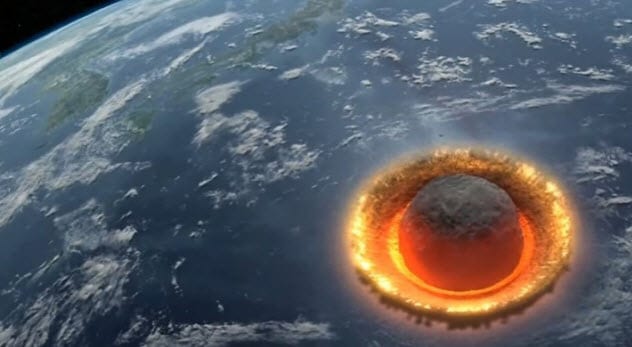 One rock stimulated the Earth to erupt for as long as a million years. Measuring 15 kilometers (9 mi), it hit Canada 1.85 billion years ago in the Sudbury basin. The resulting damage left the second-biggest crater found thus far with a diameter of roughly 150–260 kilometers (93–161 mi).

Since most craters eventually end up being destroyed by geological processes, it’s difficult to study the link between space impactors and volcanism. However, the Sudbury event left behind a remarkably preserved site that is perfect for this kind of research.

During 2013–2014, scientists climbed into the crater and extracted over a hundred samples from the 1.5-kilometer-thick (0.93 mi) rock layers within. The samples consisted of melted surface material as well as volcanic fragments shaped like crab claws. The peculiar formations resulted when gas inside the superheated rock caused them to explode violently.[7]

The rocks were different enough to show that continual, volatile eruptions produced them. The process lasted an incredibly long time, from hundreds of thousands of years to a million years at most. 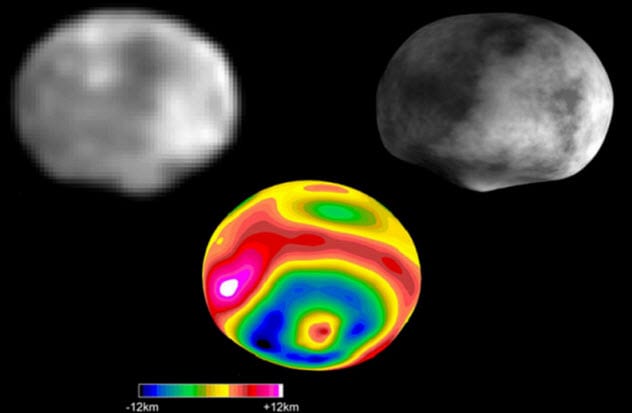 The second-largest asteroid in the solar system, Vesta, is special. Apart from being an asteroid, it’s also the last remaining protoplanet from the solar system’s beginnings. Vesta is approximately 525 kilometers (326 mi) wide, but its inner structure doesn’t match that of other asteroids.

Instead, like Earth and Mars, it has a core of iron and nickel and a rocky surface. At one point, a violent impact carved a crater near the southern pole and ejected the Vestoids.[8] One such Vestoid, called 1999 AT10, is unlike any known asteroid. It did not come from the outer crust of its parent but from deep within.

This makes it a priceless find. To even begin to understand how the planets formed around 4.5 billion years ago, the exact thickness of Vesta’s crust needs to be calculated. In turn, this will allow scientists to identify which materials existed at the birth of the solar system and blended to form the protoplanet.

Since 1999 AT10 came from inside of Vesta, this suggests that the maximum crust breadth is equal to the depth of the crater, which is about 25 kilometers (16 mi) deep. 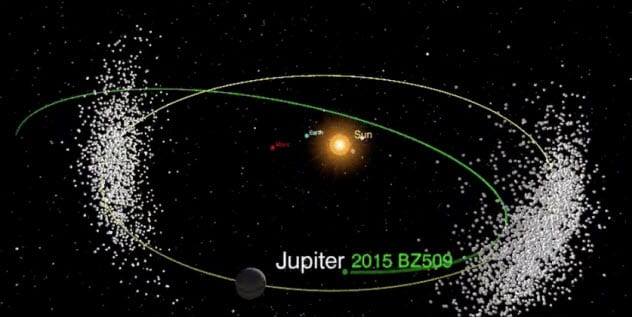 In 2015, astronomers found a bizarre boulder among Jupiter’s Trojans. Nicknamed “BZ,” it shares Jupiter’s orbit but moves in the opposite direction of every planet, the Sun, and 99.99 percent of solar asteroids. This is called retrograde motion. But while rare, it’s not unique.

Even so, BZ does something spectacular. Since reversed paths spell an almost inevitable collision, other retrograde asteroids avoid planets. But not BZ. With every orbital lap, it comes dangerously close to Jupiter. No other planet in the solar system owns an asteroid that behaves in this manner.

Remarkably, the plucky asteroid has remained safe for thousands of laps and researchers estimate that it will continue to play its lethal game for at least another million years. Jupiter may represent the greatest threat to BZ. But for now, the gas giant’s gravity also keeps BZ safe.[9]

Every time the pair orbits the Sun, the asteroid passes inside and then outside of Jupiter. Each turn’s gravitational tug cancels out the other, and this keeps the asteroid out of harm’s way. 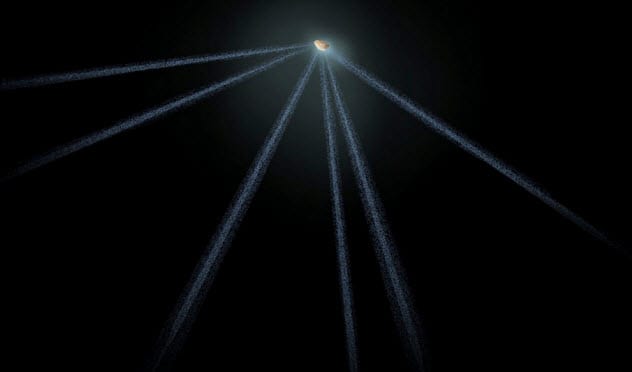 Comets are famous for their fiery tails, but one asteroid outshines them all. In 2013, the Hubble telescope revealed an unknown phenomenon in the solar system’s asteroid belt—a space rock with tails.

For asteroids to develop comet-like dust trails is unheard of, and incredibly, this one flaunted six glowing tails. Dubbed P/2013 P5, its existence shocked scientists. They were also amazed by the way the beams shifted. When found, the tails were radiating from one side of the asteroid. But within 13 days, they ended up on the complete opposite side.

It would appear that the tails didn’t sprout all at once but in bursts. For this reason, it’s likely that a collision didn’t bring on this change. Rather, it probably occurred because P/2013 P5 started to tumble out of control after experiencing radiation pressure.

This destabilized the asteroid so much that its gravity could no longer hold onto material from the nucleus and surface. The 425-meter-wide (1,400 ft) rock is believed to be a 200-million-year-old fragment of a long-destroyed larger object. So far, P/2013 P5 has lost up to 1,000 tons of dust.[10]

10 Discoveries That Shed Light On Mysteries Of Our Solar System