Artistic genius can be a flighty thing. No sooner have you started on a project than another brilliant idea enters your head and you turn to that. Leonardo da Vinci was famed for his creations in his day but he was also infamous among his patrons for his inability to deliver on promised artworks. One of his proposed artworks was the largest equestrian statue in the world, yet it never got beyond a clay model. Some artists however did begin to make sculptures but, for whatever reason, have left them unfinished.

Here are ten of the most amazing, if aborted, sculptures ever half-made. 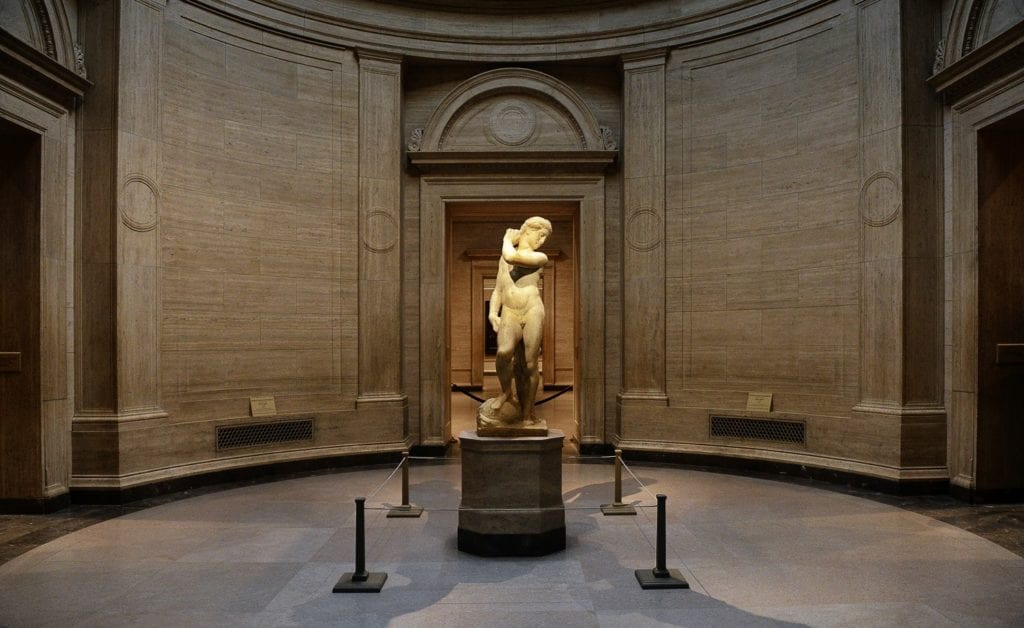 Michelangelo was a younger contemporary of Leonardo and both were rivals vying to create the most impressive works of their time. When Leonardo mocked Michelangelo he in turn called Leonardo fought back saying “horse-modeller that you are, who, unable to cast a statue in bronze, were forced to give up the attempt in shame.” But Michelangelo, as we shall see, another artist who left artworks unfinished.

Italy in the time of Michelangelo was fragmented into many warring states. After a siege the pope placed a brutal governor over the city of Florence who commanded Michelangelo to make a statue. When a new duke took over the city the sculpture was abandoned and Michelangelo left the scene. He left the work so unfinished that even the subject of the statue is debated.

Is the figure pulling an arrow from its quiver, as Apollo would, or is it getting a sling to kill Goliath, as David would? Either way it is a gorgeous piece of art.[1] 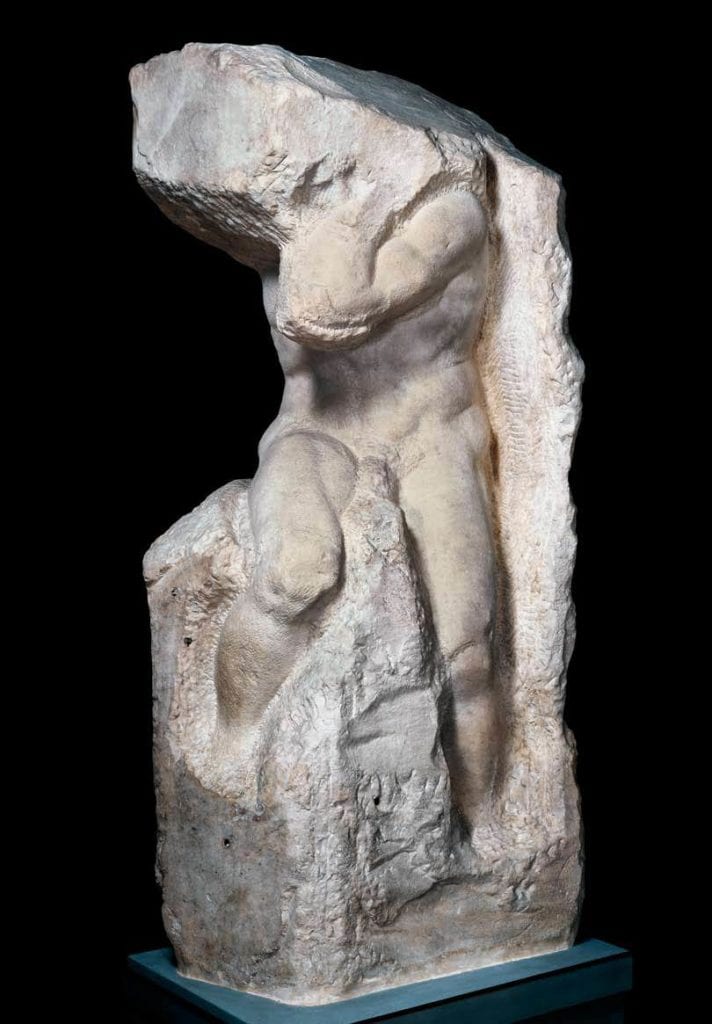 Michelangelo was famous for his ‘non-finito’ style. Vasari, who wrote one of the first books of art history, said that “the works he envisioned were of such a nature that he found it impossible to express such grandiose and awesome conceptions with his hands, and he often abandoned his works, or rather ruined many of them… for fear that he might seem less than perfect.”

When Pope Julius II, known as the Fearsome Pope, turned his attention to art he planned big things. Among other achievements he brought to fruition was the Sistine Chapel paintings of Michelangelo. When Julius wanted a tomb he called on Michelangelo again. The pope wanted a mausoleum worthy of a great man – and he commissioned Michelangelo to surround his tomb with sculptures.

Among these were to be a series of figures known as the prisoners. The Awakening Slave, the Bearded Slave, the Young Slave, and the Atlas Slave were meant to adorn Julius’ tomb but were never completed. Today they stand as human forms attempting to struggle free of their marble but are prized by historians of art for the clues they reveal about Michelangelo’s technique.[2] 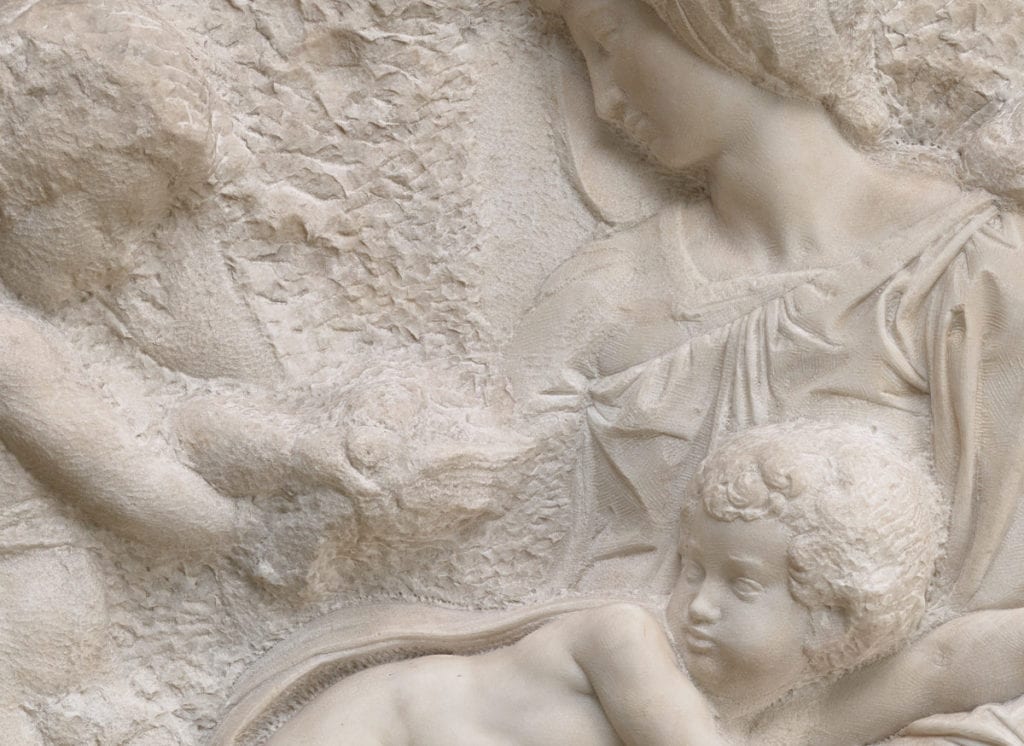 There is only one marble sculpture by Michelangelo in the UK and it is one of the prized possessions of the Royal Academy. The ‘Virgin and Child with the Infant St John’ is yet another unfinished work by Michelangelo though it remains a beautiful work of art.

Also known as the Taddei Tondo (a tondo being round work or art) it shows the rapid and hard blows that Michelangelo used to create his sculptures. On the reverse of the work there is a thin crack that may have been caused by Michelangelo’s hammer blows, and there is a missing section that may be another mark of his quick work.

The Taddei Tondo has recently been in the news because of discussion of whether it should be sold by the Royal Academy to secures its finances. Some have valued the sculpture at £100 million.[3] 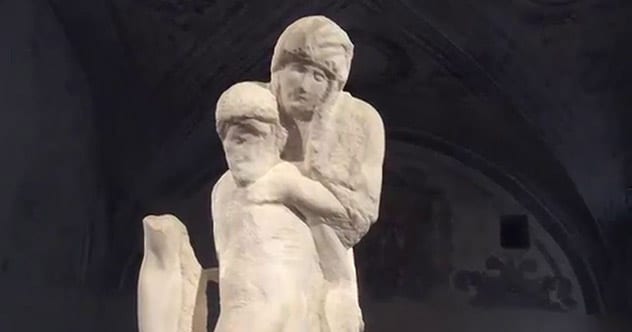 Michelangelo’s Pieta in the Vatican is one of the most famous sculptures in the world. Showing the Virgin Mary with Jesus’ body after the crucifixion it is a hugely moving work of art. But it is not the only time Michelangelo sculpted the scene. His last work of art, left uncompleted at his death, shows the two figures in a completely different pose.

The sculpture as it stands today is not the first version he had tried to make from the block of marble he used. Becoming dissatisfied with the results Michelangelo hacked away all his previous work except Jesus’ right arm.

Michelangelo once said “I value highly the work done by a great master even though he may have spent little time over it. Works are not to be judged by the amount of useless labour spent on them but by the worth and skill and mastery of their author.” So perhaps he would not be sad that so many of his works remained unfinished at his death.[4] 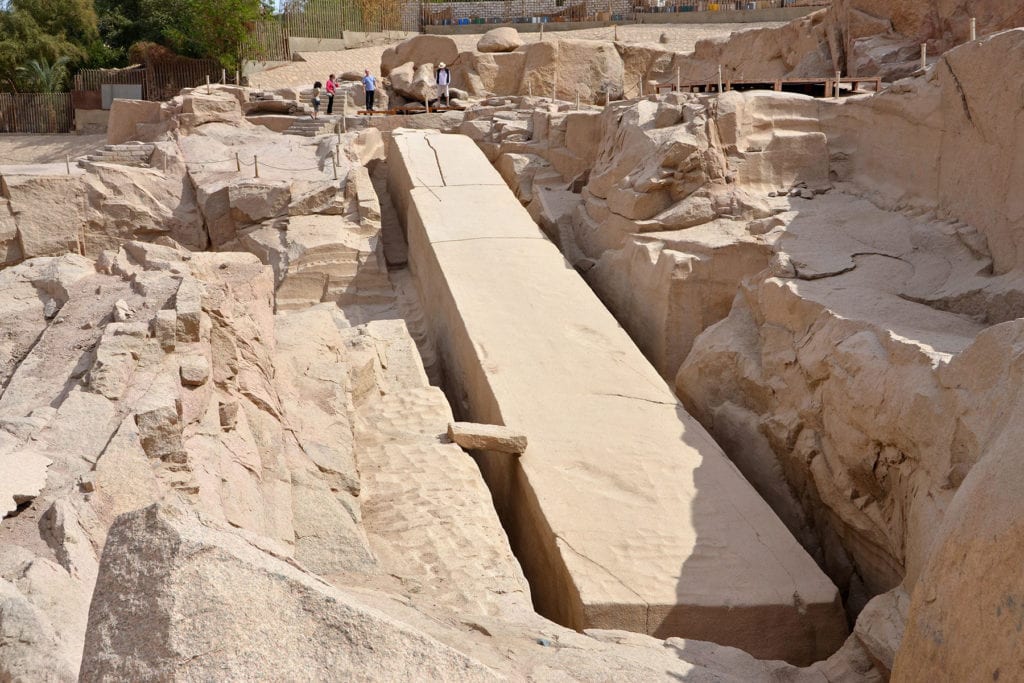 The ancient Egyptians loved to erect monumental works of art. Among the largest were the free-standing obelisks that scraped the sky long before modern cities began erecting skyscrapers. The largest obelisk ever discovered measured around 42m (140 feet) tall. It would have been a third larger than any other obelisk. Unfortunately for the Egyptians who were making it the obelisk fractured while it was being cut from the rock.

The obelisk was commissioned by the controversial female Pharaoh Hatshepsut around 3,500 years ago. It was as the obelisk was being cut from the bedrock that the cracks began to appear. What was a terrible outcome for the Egyptians was fortunate for archaeologists as it reveals how they were made.

Hollows carved into the rock show the points where the craftsmen hammered dry wooden wedges into them. The wedges were then soaked in water that caused them to expand. The pressure of the wood on the stone forced it to crack. These cracks were useful, the ones that destroyed the obelisk were less useful.[5] 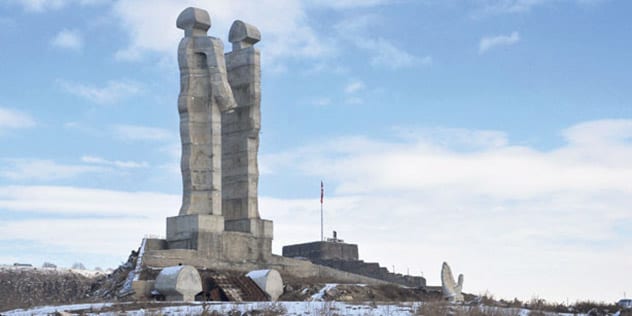 Any mention of the history between Turkey and Armenia is bound to cause trouble. There seems to be abundant evidence that Turkish Ottoman forces between 1914 and 1923 forced Armenians out of their territory. Disputed figures put the death toll at around 1.5 million. The Turkish government strongly denies any wrongdoing but many refer to this period as the Armenian Genocide.

It is against this background that Naif Alibeyoglu, mayor of a Turkish town, decided to build a monument that would help to heal the wounds of those events. The Monument to Humanity shows two figures facing each other and would have stood 100 feet tall.

Opposition was immediate and some thought having one figure bowing its head to the other showed that Turkey was in some way responsible. Building of the statue was never completed. Laying in the dust at the base of the monument is a large hand, called ‘The Hand of Friendship,’ that it seems will now never be put in place.[6] The monumental statues of Easter Island are famous around the world. The enigmatic Moai, also known as Easter Island Head (though they have bodies), come in a variety of sizes. The largest one standing is known as Paro and is 10m, or 33 feet, tall. Yet there was one that would have dwarfed it. If it had ever left the quarry.

El Gigante was over twice as tall as Paro at 72 feet tall. The builders of the Moai were perhaps a bit too ambitious when they started making El Gigante. It weighs in at around 170 tons which the Easter Islanders would have struggled to move. They lacked wheels and metal so would have had to use sledges and logs to move and erect the statue.

Today El Gigante lays where it always has, in the quarry were it was being carved. Never finished and never moved it remains facing up at the sky. This is actually a more dignified ending that most Moai faced. Some time in the 18th century the Moai were all pushed over so that their faces were in the dirt.[7] David Govedare erected a statue of galloping horses to celebrate 100 years of Washington being a state. The multiple life-sized horses each weigh over 1000-lbs and as they stand are one of the most viewed pieces of art in the state. But they are not the complete sculpture as the artist envisioned it.

According to the original plan the horses were supposed to be running out of a basket. The horses were supposed to be a gift from the Grandfather Spirit who would declare “Creatures of this planet, behold, a Great Basket! I send this basket, bearing the gift of life, to all corners of the universe. Now, take these ponies; I am cutting them loose. They will inspire a spirit of free will. They will be a companion for work and play on this planet.”

Unfortunately funds ran out long before the intricate basket could be completed. The basket would have been decorated by local artists to show scenes of people and nature. The artist has not yet given up. Recently he hoped to raise $1 million to complete his sculpture.[8] Ancient Greek statues, like ancient Greek culture, had a fondness for naked young men. Kouroi were statues that can be found throughout the Greek world. Over the centuries the development of Greek art can be followed in the changes of style shown in these kouroi. Most of them are life-size but some of them could be far larger.

One Kouros found at Apollonas on the island of Naxos would have stood 10m tall – if it had stood at all. It was begun in the 8th century BC but never left the quarry. This monumental statue also departs from the normal form of kouroi by showing an older man with a beard. Some archaeologists think this sculpture would have been a god, possibly Apollo or Dionysus.

Why the statue was abandoned by its creators is unknown. Some think that the cracks in it were the reason it was left there. Others think that they realised it would be too heavy to move to its final site.[9] Crazy Horse was a war leader of the Oglala, one of the Lakota bands and part of the Sioux Alliance, in the 19th century. Respected by his own people and his enemies he was one of the most famous Native Americans of his time. In the 1930s Henry Standing Bear began to plan a monument to Crazy Horse that would rival the presidential faces on Mount Rushmore. He wrote to Polish sculptor Korczak Ziolkowski
“My fellow chiefs and I would like the white man to know that the red man has great heroes, too.”

Work on the statue started with a blast of dynamite in 1948. In the intervening years millions of tons of rock have been removed from the site are the sculpture emerges from the mountain. Ziolkowski continued to direct work on Crazy Horse until he died at the site in 1982. Work continues at the moment but no one can say for sure when the monument will be complete.

When the statue is completed it will stand 172m, 563 feet, tall making it the second largest statue in the world. All of the faces on mount Rushmore would fit onto Crazy Horse’s head.[10]