The Ancient Greeks are credited with inventing sports stadiums for their Olympic and Panhellenic athletic contests. The word stadium itself is of Latin origin, however, and the most famous stadium in the world is, without doubt, the Coliseum in Rome. Intended for gladiatorial shows, the Flavian Amphitheatre (as the Romans called it) held over 50,000 spectators and remains a marvel of ancient architecture.

In the 21st century, football (soccer to those of you across the pond) has become the world’s most popular sport, and there are thousands of football stadiums all around the world. Not all of them can be said to match the Coliseum for its architectural grace and beauty, however. So here are ten bizarre and fascinating football stadiums which have taken the ancient concept of the sports arena in new and surprising directions.

Bursaspor is a Turkish football club that won its first-ever Süper Lig title in 2010. They were only the second non-Istanbul club to win the league in Turkey, so this represented a huge achievement. To celebrate this victory, the club commissioned a new stadium. Their former ground, the Bursa Atatürk, had a relatively small capacity of only 25,000 spectators, so it seemed appropriate for the newly crowned Turkish champions to upgrade.

Sports teams often look for ideas in their club identity, and since Bursaspor’s nickname is the Green Crocodiles, this was used as the very literal inspiration for a new stadium. Called the Timsah Arena (Timsah means crocodile in Turkish), Bursaspor’s home since 2016 is exactly what its name suggests—a crocodile. With an exterior built from green glass and overlapping membranes, this 45,000-seat stadium was met with both amazement and ridicule when it was finished. Complete with a gaping mouth, eyes, teeth, and scales, the Timsah Arena is certainly memorable. Unfortunately, Bursaspor hasn’t won a league title since that famous 2010 victory.[1]

Far from a masterpiece of modern architecture, the Cierny Balog appears at first glance to be an inconsequential little ground. Situated in the picturesque, pine-clad hills of the Slovakian countryside, it is home to a tiny club called TJ Tatran Cierny Balog. However, if you chose to attend a match, you would be in for a genuinely unique surprise.

That is because the Cierny Hron railway line runs directly between the pitch and the ground’s main stand. And it gets better: trains pass through the stadium even during matches! Fans are known to applaud the trains as they pass through, especially because most of them are actually steam trains from the early 20th century. This has become a regular distraction for the players, who cannot hear each other over the sound of the steam train’s noisy engine. Unsurprisingly, the TJ Tatran Cierny Balog Stadium is believed to be the only sports stadium in the world with an active train track running through it.[2]

Singapore is not known for its sporting prowess. Indeed, with a population of nearly six million and only 733 square kilometers (283 square miles) of land area, Singapore has the third-highest population density of any country in the world. That leaves little room for sporting venues, especially ones as large as football fields. Nonetheless, this obstacle hasn’t stopped the Singaporeans from trying.

In 2007, the “Float @ Marina Bay” was unveiled. As the name suggests, this stadium features a one-of-a-kind floating football pitch. Situated on the Marina Reservoir, thereby making clever use of Singapore’s harbor, the pitch has a 27,000-seat grandstand looking on from the mainland. Although it was originally intended as a temporary fixture, the Float became so popular that it has now been retained as a permanent stadium and will be updated in the near future. Designed by the Singaporean Defence Science and Technology Agency to hold the weight of up to 9,000 people, the Float @ Marina Bay is a testament to the power and potential of creative thinking in architecture.[3]

Although this one is not technically a stadium as it lacks proper seating for spectators, the sheer madness of this football field in Romania makes it worth mentioning. Not far from the Ukrainian border is a small town called Cacica, with an active salt mine that holds nearly 250 million tons of sodium chloride in reserve. It was first used over 5,000 years ago and has been home to monks and miners ever since.

The Cacica salt mine has several notable features, among them a ballroom, a museum, and two chapels for both Orthodox and Catholic workers. Its most unusual installation, however, is a football field nearly 54 meters (150 feet) below ground. Complete with goals, pitch markings, and standing room for spectators, this is probably the only football field in the world that would survive a nuclear blast. The high salinity content of the air apparently makes exercise difficult. But for anybody who wants to give it a try, the pitch costs a little over $20 an hour to rent (100 Romanian lei).[4]

Our next stadium takes us from the salt mines of Romania to the rainforests of the Amazon. Located on the outskirts of Curitiba—a city in the south of Brazil—is a small football stadium years ahead of its time. Officially called the Estádio Janguito Malucelli but colloquially known as the Ecoestádio for its environmentally sustainable construction, this ground is home to the minor club J. Malucelli Futebol and holds only 6,000 spectators.

The Ecoestádio was built in 2007 without a single drop of concrete. Rather than constructing a large stand, the club chose to situate its field next to a gentle slope, providing a perfect natural stand for spectators. Almost every part of the stadium’s infrastructure is wooden, even down to its grass-covered seats. This wood was taken from reforested areas, and the iron used for metal fittings was recycled from old railway sleepers.) Unfortunately, the Ecoestádio has now fallen into a state of disrepair. This is a tragedy for the fans of J. Malucelli Futebol, who were once very proud of their groundbreaking home field.[5]

The Taiwanese National Stadium in Kaohsiung takes sustainability down a wholly different path. Rather than being built from reforested wood and recycled iron, this colossal stadium is covered in solar panels, which provide sufficient power not only for the stadium’s needs but also for the local area. It was designed by the award-winning Japanese architect Toyo Ito and opened in 2009 for the World Games. Since then, it has been used by the Taiwanese National Football Team.

Ito’s design is intended to resemble a sleeping dragon, and the solar panels on the stadium’s roof are supposed to look like its shimmering scales. This was not purely aesthetic, however. With help from the Taiwanese Weather Bureau, the stadium was positioned with one end open to the prevailing summer wind, thus keeping fans cool without artificial air-conditioning. Furthermore, the roof was carefully designed to shelter spectators from the summer heat. The stadium also has facilities for reusing rainwater. The Kaohsiung National Stadium is a marvel of sustainable architecture and will hopefully serve as an example for future projects worldwide.[6]

We now move from the high-tech to the Medieval. Trogir is a Croatian island city on the Adriatic Coast that was founded by the Greeks and conquered by the Romans. During the Middle Ages, the Venetians arrived and built countless churches, cathedrals, and castles. This Venetian “old town” became a UNESCO World Heritage Site in 1997.

NK Trogir is a local football club founded in 1912, and they somehow ended up with a stadium right in the middle of the old town. Behind one goal stands the 15th-century St. Marko’s Tower and behind the other is the 14th-century Kamerlengo Fortress which was used as a shooting location for Game of Thrones.

Known as Batarija, this tiny football field has a capacity of only 160 spectators. However, those lucky few will find themselves sitting just a few feet away from the warm water of the Adriatic. The person who laid this pitch deserves huge credit for finding arguably the most beautiful—and historic—location of any football field in the world.[7] 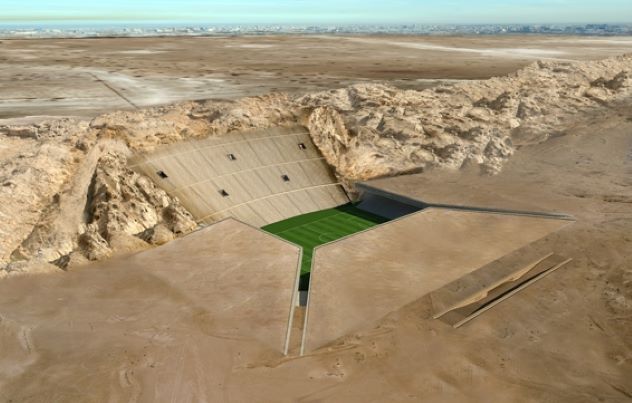 This stadium has not yet been constructed, and while there are plenty of mind-boggling concept stadiums (for example, Chelsea FC’s proposed power station stadium), this one is the best of the lot. Designed by MZ Architects and intended to be built in Abu Dhabi, the Rock Stadium would perhaps be the world’s most impressive football field—if it is ever completed.

Inspired by the ruins of Petra, ancient Greek auditoria, and monolithic Egyptian architecture, the Rock Stadium’s main stand will be literally carved into the face of a mountain. The pitch itself will be sunk below the desert floor to keep it cool, and the roofs of the three supplementary stands will be almost flush with the sand, therefore creating something which looks like a natural rock formation. This design, which has already won several awards, was made in cooperation with geologists, topographers, and cave experts. Football fans can only cross their fingers and wait, however, as there has not been a project update for several years.[8]

Home to a member of European footballing royalty, the Munich Allianz Arena was opened in 2005 to replace the old Olympiastadion. Some have called it an eyesore, and others have acclaimed it as the first truly modern football stadium. Well, with an exterior clad entirely with inflated air-foil panels, this 75,000-seat stadium certainly looks like a UFO has landed in the green hills of Bavaria.

The most famous tenant of the Allianz Arena is Bayern Munich. However, until 2017, they shared the stadium with their city rivals, 1860 Munich. This is where the brilliance of the Allianz Arena shines—literally. Its facade of inflated panels can light up in a variety of colors. So when Bayern Munich is playing, the stadium lights up red, but when 1860 Munich is playing, it lights up blue. When the German National Team plays at the Allianz, the stadium lights up in the colors of the German flag. Allianz Arena, the inspiration for American football’s MetLife Stadium, is so bright that it can be seen from 80 kilometers (50 miles) away in the Austrian Alps.[9]

My visit to Odi stadium

It is hard to decide if South Africa’s Mmabatho Stadium is bizarre or brilliant. Though it is neither as quirky nor ingenious as some of the other stadiums on this list, the Mmabatho is quite unlike anything else. Built by an Israeli firm in Mafikeng in 1981 and allegedly designed by architects from the USSR, the Mmabatho holds 60,000 spectators. It is no longer used for professional football matches, however, both because of its dangerous state of decay and a host of complex South African political tensions.

As for the Mmabatho’s architecture, only pictures can fully convey just how strange it is. The oblique, clashing angles of the concrete stands defy belief. It is hard to figure out how fans get to their seats, never mind how the whole thing is even standing. Curiously, the Mmabatho is an almost identical knockoff of another South African sports field, the Odi Stadium, which is now closed and on the verge of collapse. These twin stadiums are regarded as white elephants, and they represent a particularly unusual part of South African history.[10]