There is a lot to learn about the sweet science if you want to be a part of the fistic world. If you are serious about the art of pugilism, a boxing trainer is highly recommended as you learn the basics and improve your technique as time flies. This is a list comprising of some of those moves you may hear about as you get into boxing, or you already know them by heart as I’m sure is the case with consummate boxing fans. 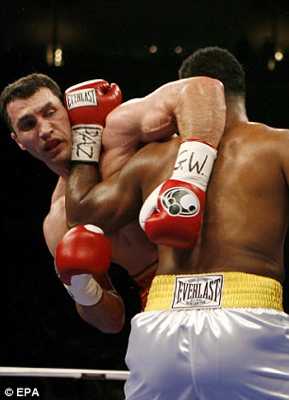 As the name suggests, the “Jab and Grab” is self explanatory. Like many other boxing moves, this can be considered to be a mixture of offense and defense as you lead in with a jab and quickly proceed to grab your opponent so as to neutralize any further attacks coming at you. The rapid closure of distance is essential as you don’t give the opponent any room to free their arms. And the right power and conviction of the jab is a necessity as well, as you would definitely want to score a hit before clinching on to your opponents, or the whole move becomes redundant. The Klitschko brothers use this maneuver a lot and Andre Ward is another recent exponent of such move. 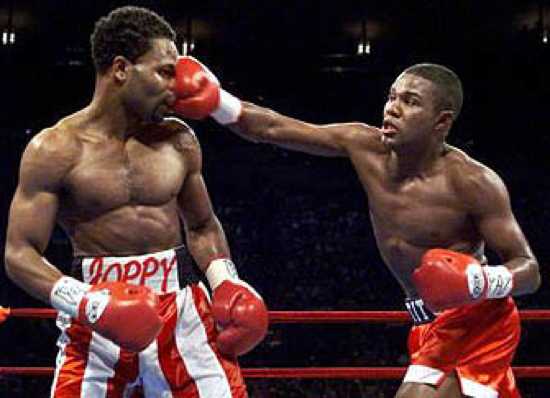 Not to be confused with a jab, a straight is a power shot. You deliver it by crossing over your dominant hand to deliver the blow, and hence it’s also called the “cross.” For orthodox fighters who have a left foot forward stance, the left hand is best used for jabbing, with the right hand for a straight shot. It’s vice-versa for southpaw fighters, who have a right foot forward stance. While generally orthodox fighters and southpaw fighters are right handed and left handed respectively, it is not always the case. This is the only one of the four basic boxing punches exclusively featured on this list, jab, hook and uppercut being the other three. This is due to the fact that it is extremely slick, and is almost always a part of any boxing combos imaginable, starting from the elementary one-two, to a variety of counters. Floyd Mayweather, as famed as he is for his defensive prowess, will use his fast straights repeatedly to immobilize his opponents to win his matches. 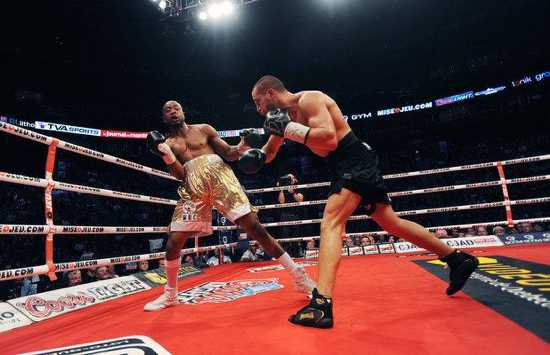 The “Bolo Punch” is essentially a long swinging uppercut, but that’s not the trick. Because of the fact that such long drawing action will be obviously spotted by your opponent, the move capitalizes on distraction. The back hand is dropped or swirled around to give your opponent the impression that a heavy hook or straight is coming up, while you use your lead hand to land a powerful blow. You must really sell your supposed upcoming punch to distract your opponent, and this may leave you open. But boxing maestros such as Sugar Ray Leonard and Kid Gavilan were able to pull it off elegantly. In recent memory, Roy Jones Jr. was a great exponent of this audacious deception move. 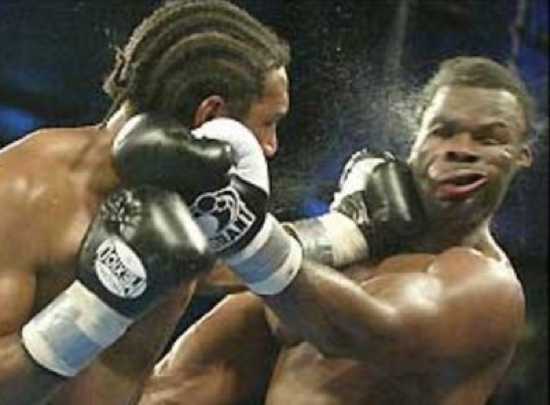 The “Haymaker” works exactly like a hook, with just a bigger extension of your hooking arm. It is preferred because of its enormous power potential. You cock back your hand for extra extension, and deliver the haymaker in wide semi-circular looping fashion, just like you would deliver a hook, but with more force, putting all your weight behind it. Because you are putting so much effort into one punch, it can leave you open and unbalanced, so the wild haymaker is better used as a finishing move when the opponent is already weakened and unable to counter. There are, however, question marks as to what is a good haymaker, and it seems that a wildly flung over exerted hooks are relegated to the haymaker category, which would mark poor technique. 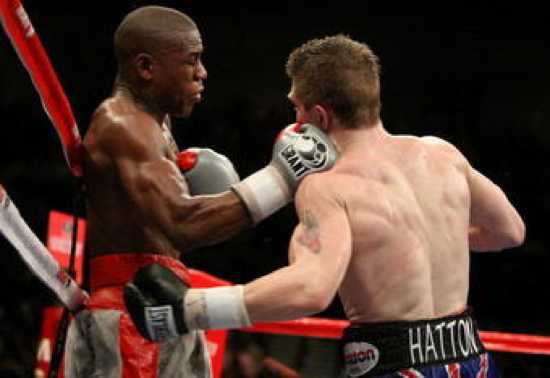 The “Check Hook” is another variation of the hook. This move is more dependent on the particular situation of the fight as the only way to make it work is if your opponent lunges in or charges forward. Basically, you pivot your left foot as the opposition comes in (provided you are right handed) and turn and hook at the same time. This makes them miss you momentarily as you are turned sideways, and at the same time the pivotal force added to the hook drops them. You attract them like a matador would attract a bull, and then move out of the way, landing a shot in the process. If done correctly, your opponent should be fast on the floor. Mayweather used the check hook to knock-out the then undefeated Ricky Hatton, in what many consider the purest example of the move. 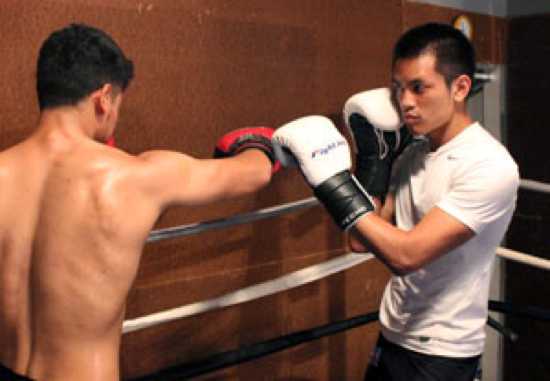 I have featured one basic offensive move, the straight, so it’s only fair that one basic defensive move be also featured amongst all these other tricks. When you think of boxing defense, dodging or blocking comes to mind first. Dodging by slipping, weaving or just retracting, and blocking using the arms, gloves or shoulders. Parrying is somewhat left out of the average boxing fan’s imagination, which is why it’s important to stress how useful and cool the move can be. It’s only standard defense procedure like I said, and what happens is that you deflect your opponent’s punches using the opposite hand or elbow to the one they are using. You can parry a punch inside or outside, just helping to direct their punch elsewhere aside than at your direction. The parry doesn’t absorb the punch’s power, thereby causing minimal damage to your hands, but also it leaves your opponent unbalanced if done correctly, giving you more space and time to counter as their hands are momentarily out of the way. It is truly a beautiful defensive move. Jack Johnson was known as a parry expert, and in more recent times Larry Holmes had a very unique elbow parry, where he would rotate his elbow upwards to deflect punches. 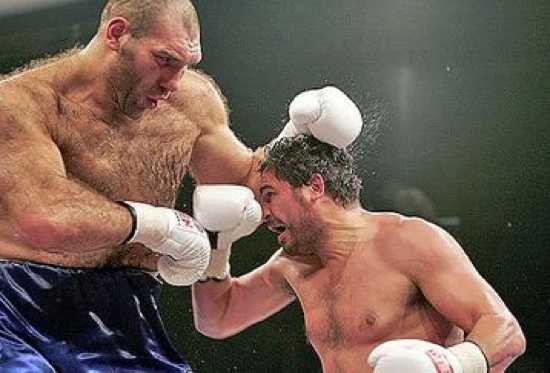 Feints cause no damage whatsoever to the opponent, rather it’s a distraction ruse. It allows your opponent to think you are about to do one thing – in motion for a certain punch – only to find you switching it up with another punch aimed at a different spot. It can also be used to predict your opponent’s reactions as to how they act to your feint, whether they choose to block, parry, or slide underneath. By understanding their defensive patterns better, it gives you the chance to stay one step ahead as the aggressor. One of the most spectacular feints is the body drop. Your move your upper body in a quick bend, dropping your left knee and moving your left hand forward. From there on, it can be doubled up with other feint combinations, such as the drawback feint where you raise your dominant arm to emulate a straight cross. Boxers with blinding hand speed are most well equipped for feint moves, because their opponents have to be eternally alert for incoming rapid punches. Manny Pacquiao and Amir Khan are able to slip in a feint or two between their usual flurries of punches, just so they can go for an ever better shot than originally planned. 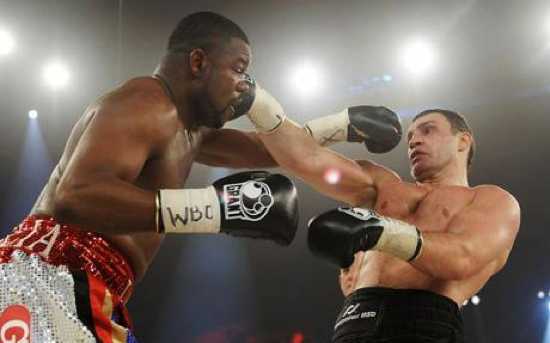 The “Pull Counter” is a move which requires a tremendous amount of skill, and maybe also natural gifts, as it is one straight out of the books of matrix. It is also one of the simplest in terms of technique. You slightly lean in towards your opponent, setting the trap, and then draw your head back rapidly to evade the thrown punch and then counter it with a straight. It looks flattering in slow mo and is heavily reliant upon the fighter’s reflexes. It is always in the arsenal of elusive fighters, big and small. Consider Muhammad Ali and Naseem Hamed, both having their fare share of fun with this move, while using it to devastating effectiveness at the same time. 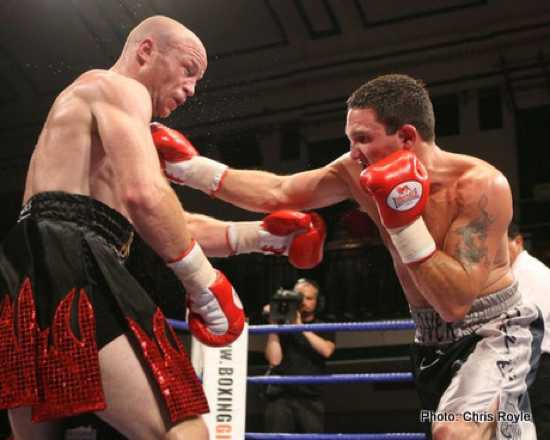 This move is a delight to watch as one marvels at how comfortable the fighters are in their action and how many times they must have practiced it in the gym to perfect it. Basically, the fighter uses the head to push against the body of the opponent, while able to land left and right hooks without looking up. It is not head butting, but rather using the tucked head as a shield of sorts where the opponent has to punch lower to land anything at all, something which you don’t train for normally. Only the uppercut might be a solid counter move in this case or the opponent could get low himself which is likely to result in the clash of heads and lead to a more physical roughhouse fight. So it’s definitely irksome for a fighter to face somebody who is an expert at the low head stance. Tim Bradley and Lamont Peterson are two boxers today very adapt at feeling the way through a match using their heads, literally. 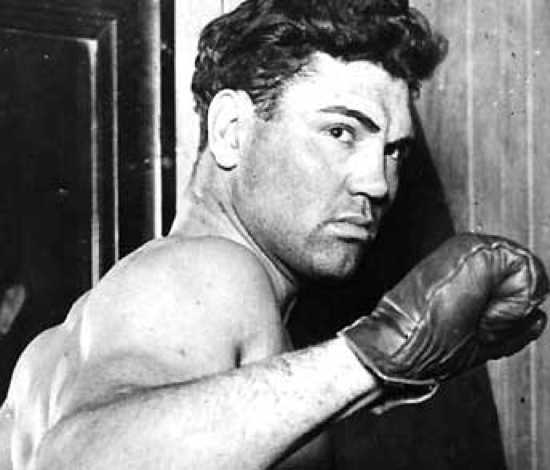 For purists, these two moves are separate, but it is their combinatorial effect which renders it as a true art form. The eponymous “Dempsey Roll” is named after its inventor Jack Dempsey, who used the defensive technique called bob and weave, but with vastly more emphasis, crouching his head and lowering his shoulders before getting back up again and repeating it in a figure eight motion. Now Floyd Patterson is accredited with developing the “Gazelle Punch” where he would leap up from a down bend position to deliver a punch. You can see clearly how the two maneuvers fit, and both Dempsey and Patterson would complete each other’s part unknowingly though each deserving half of the move’s accolades. So in reality, what this shows is that Dempsey Roll and Gazelle Punch were always paired together, with the fighter inching in closer in a well orchestrated defensive tactic, and then using that same momentum to deliver a tough upwards blow. This could either be a hook, straight or an uppercut. Mike Tyson was a master at this move already familiar with his trainer Cus D’Amato’s preached bobbing and weaving. But I have even seen small fighters such as Nonito Donaire do this as well, which again goes to show how size doesn’t really matter if you have got the techniques right.