Julia Child is known by most for being a pioneering chef, television personality, and cookbook author. She starred in eight television cooking series and published a total of 11 cookbooks. A classically trained chef, Child was passionate about food and brought French cuisine to an American audience and the world via her long-running television series and best-selling cookbook. She was a lover of all things buttery and creamy and became a cultural icon. Yet, she was also a trailblazing woman with a surprising past.

Related: Top 10 Fascinating Facts About Being A Chef

Julia Child was tall… really tall. At some 1.8 meters (6 feet 2 inches), it should come as no real surprise that she was a basketball star in school. She was the captain of the basketball team at the affluent Katharine Branson School for Girls in California. She was also a member of the tennis team, golf team, swim team, and president of the school’s hiking club.

After graduating with a degree in history from Smith College in Massachusetts, she wanted to play a role in the war effort in WWII. “Everybody that I knew was in the Army or the Navy or down in Washington, so that’s where I went,” Child recalls.

However, her efforts to enlist were rejected by both the Navy’s Women Accepted for Volunteer Emergency Service and the Army’s Women’s Army Corps because of her exceptional height. Julia’s two siblings were also over six feet tall. Her mother was able to boast that she “gave birth to 18 feet of children.”[1]

9 My Name Is Child, Julia Child

Julia and Paul Child’s Real Spy Adventures with the OSS

After moving to Washington, D.C., in 1942, Child was employed by the Secret Intelligence branch of the Office of Strategic Services (OSS), a forerunner to the CIA. She started out as a typist before being moved up to become a research assistant.

While she may not have been an actual spy per se, she had top security clearances and handled some highly classified papers during her tenure with OSS. She received an Emblem of Meritorious Civilian Service award when she was posted in China.

Child herself did not reveal too much about her time at the OSS; however, the CIA declassified some information about her service in 1981. Talking about his book A Covert Affair: Julia Child and Paul Child in the OSS, author Jennet Conant explains that “Julia was never actually a spy, but she very much hoped to become one when she joined the agency.”

Her work with OSS not only gave her the opportunity to travel abroad but also resulted in her meeting her future husband, Paul Child, who was also working for the agency. Two years after getting married, the couple moved to France, where Julia was to embark on a new career.[2]

During her time as a research assistant in the OSS, Child was involved in a project to develop shark repellent during WWII. In part, this was to try to prevent sharks from attacking downed airmen at sea. It was also hoped that the repellent would help to keep sharks away from waterborne explosives intended for German U-boats.

It was, in reality, also a morale booster of sorts, as wartime newspaper stories of shark attacks had sailors and airmen alarmed by the thought of conducting dangerous missions over shark-infested waters.

“I must say we had lots of fun,” Julia told fellow OSS Officer Betty McIntosh during an interview for Betty’s book on OSS women, Sisterhood of Spies. She explained how “we designed rescue kits and other agent paraphernalia. I understand the shark repellent we developed is being used today for downed space equipment—strapped around it so the sharks won’t attack when it lands in the ocean.”[3]

In 1951, Child graduated from the world-renowned Cordon Bleu cooking school in Paris. She was determined to adapt classic French recipes, making them less intimidating for the average American home cook. Ten years later, Child, along with co-writers and fellow chefs Louisette Bertholle and Simone Beck, published Mastering the Art of French Cooking. The book became a bestseller, going on to sell over 1.5 million copies, cementing Child’s place in culinary history.

The cookbook remains a firm favorite among cooks, even today. This is even though a whopping 13 pages are devoted to how to make a basic omelet and that it features many recipes that call for “thinning out” sauces with full cream.

The release of the movie Julie & Julia in 2009 saw the cookbook top The New York Times bestseller chart, an amazing 48 years after it was first published. “I found the recipes, actually, much easier than I thought they were going to be, but the amount of butter was a bit overwhelming,” one recent purchaser commented. “I have this glow, and it’s from too much hot butter. I expected to break out the next day,” she added.[4]

6 Big Star on the Small Screen

The success of Mastering was parlayed by Child into the first-ever televised cooking show hosted by a woman. The French Chef, which debuted on Feb 11, 1963, and ran for ten years, with a total of 201 episodes. It was an unlikely success story, as television executives did not think the tall, middle-aged, distinctive-voiced Child would appeal to the audience. They were proved wrong, and the show even won two Emmy awards and was a firm family favorite. Julia Child became a household name and television icon. Her iconic persona was even immortalized by Dan Ackroyd on Saturday Night Live.

Julia Child returned to television in 2022 with the launch of HBO Max’s comedy series Julia. The show has been described as “less biopic than utopian workplace ‘dramedy’ about Childs’ cooking show ‘The French Chef’ and the birth of public television as we know it.”

“Her joy for cooking was also a metaphor for her joy for life,” explains HBO Max show-runner Chris Keyser.[5]

5 Butter, Butter and Even More Butter

Butter was a popular ingredient on The Art Of French Cooking show. Child herself was quoted as saying, “if you’re afraid of butter, use cream.” According to PBS, Child’s show Baking with Julia, which aired from 1997 to 1999, used an astounding 342 kilograms (753 pounds) of butter.

Child’s editor Judith Jones explained that “in this country, we sort of have a love-hate relationship with food—we love it, but we’re also afraid of this whole fear-of-fat mania.”

Julia herself was fond of saying, “Oh, butter never hurts you.” And she died of kidney failure in Montecito, California, in 2004 at the ripe old age of 91. Lashings of butter can’t be all bad, then.[6] 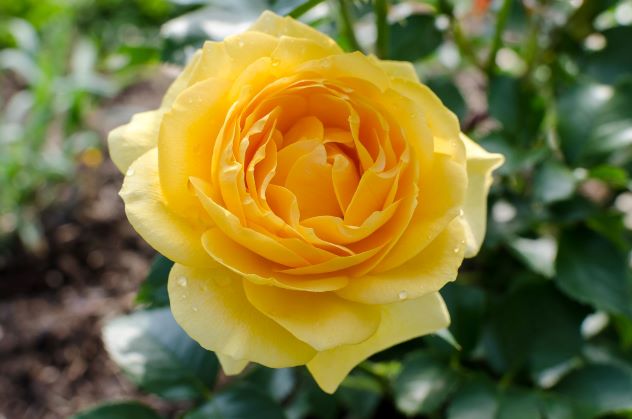 The Julia Child rose is appropriately butter-colored, but it’s described as having a scent that is reminiscent of “strong sweet licorice and spice.”

“We’d been after Julia for quite a few years to name a rose after her, but she always said I’m not worthy of that, in typical Julia style,” explains Tom Carruth, rose breeder and curator of the rose garden at the Huntington Library, Art Collections, and Botanical Gardens in San Marino, California.

Bred by Carruth in 1994, the Julia Child rose won the most prestigious rose award in the United States in 2006, the All America Rose Selection. “Just before our wonderful American icon left us, she selected this exceptional rose to bear her name. Julia loved the even butter gold color and the licorice candy fragrance,” according to Weeks Roses, the growers that originally introduced the rose.[7] 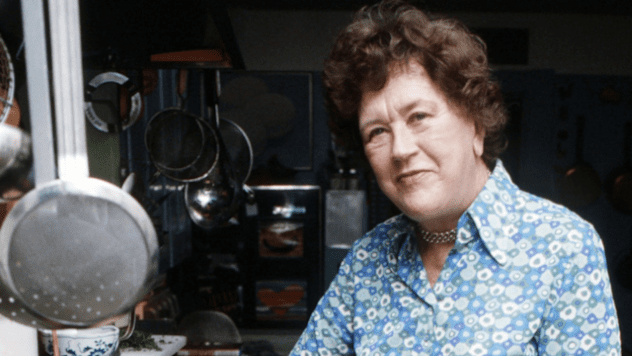 In the mid-1960s, Child had a cancerous breast removed. “In those days, there was no choice,” she told The Los Angeles Times in 1987. “They just lopped it off. When I woke up, there I was, single-breasted,” she explained.

In that era, a radical mastectomy was the only option available to her, and even then, survival rates were very low. At that time, breast cancer was barely mentioned. There was no follow-up chemotherapy treatment, and breast reconstruction surgery was not even an option at the time. “They just sewed me up, and I went home,” she recalled.

Less than two weeks after the operation, she was back to work and back on television. “I did not want to be whiny,” Child explained with her trademark bluntness [8]

2 A Different Kind of CIA

Other recognition for her achievements included an honorary doctorate from Harvard University, received in 1993. The document described her as “a Harvard friend and neighbor who has filled the air with common sense and uncommon scents. Long may her souffles rise.” In 2001, she received the coveted Legion of Honor from the French government, while in 2003, President George W. Bush awarded her the Presidential Medal of Freedom.[9]

There are a lot of quotes rightly or wrongly attributed to Julia Child, commenting on everything from butter to love and romance. But what did she actually say? Here are a handful of my favorite quotes from Julia Child, verified by WGBH. Of course, if you’re a fervent vegan or fruitarian, you might want to look away now…

“Always remember: If you’re alone in the kitchen and you drop the lamb, you can always just pick it up. Who’s going to know?”

“People who love to eat are always the best people.”

“Drama is very important in life: You have to come on with a bang. You never want to go out with a whimper. Everything can have drama if it’s done right. Even a pancake.”

“The only time to eat diet food is while you’re waiting for the steak to cook.”