Canada… once described by Winston Churchill as being a place where “there are no limits to the majestic future which lies before the mighty expanse of Canada with its virile, aspiring, cultured, and generous-hearted people.”

Yet renowned Canadian journalist and social activist, the late June Callwood, caustically observed that “the beaver, which has come to represent Canada as the eagle does the United States and the lion Britain, is a flat-tailed, slow-witted, toothy rodent known to bite off its own testicles or to stand under its own falling trees.”

In Jan 2021, a Brantford, Ontario, man took the “recycle, reuse, repurpose” mantra to a new level when a traffic stop revealed that he had used diaper boxes to create fake license plates for his vehicle.

Brant County Ontario Provincial Police (OPP) posted pics on social media, showing a cardboard Pampers diaper box cut into the approximate size of a license plate. A fake license plate was printed on a sheet of paper and attached to it.

The post went on to explain that although creative, the arts and crafts project was not overly successful, stating that “the driver realized his error and that it was time to ‘change’ things up.” It’s not known whether any charges were filed after the crafty incident.[1]

9 Break, Enter, and a Clean Getaway 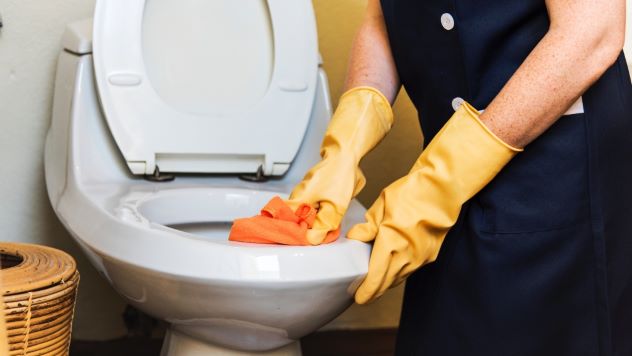 The Royal Canadian Mounted Police (RCMP) reminded Nova Scotians to lock their doors after investigating a report of suspicious activity in the town of Upper Tantallon, Halifax, in Oct 2018. RCMP officers responded to a call from a concerned homeowner, who had in turn been contacted by a neighbor, informing him that there were two shady women in his house while he was away from home.

The concerned neighbor had observed the two women moving about the home, armed with a vacuum cleaner and a mop. The officers determined that the house had been left unlocked so that the neighbor could walk the homeowner’s dog. However, the two women arrived, cleaned the house, and made a clean getaway without even knowing they had cleaned at the wrong address. Luckily they cleaned it up rather than cleaned it out!

“Although the house was cleaned for free, RCMP would like to take this opportunity to remind homeowners to ensure their doors are locked at all times,” the Mounties wrote in a press release, adding that they commended the neighbor for being observant and contacting the homeowner when he saw that something was amiss. I’d certainly love to have these “home invaders” come over to my house.[2] 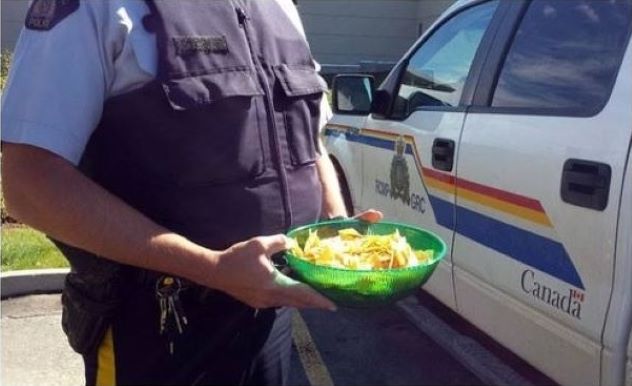 In 2015, the RCMP got wind of a large underage frosh/freshman/university party being held in Lumsden, Saskatchewan. In response, the Mounties publicly posted a cheeky RSVP to the event on Facebook. They explained that officers would be attending and promised that they would bring snacks, as well as a choice of possible charges for any misbehaving party-goers, including underage drinking or supplying alcohol to minors.

Being true to their word, several officers arrived at the party, bringing chips and salsa and mingling with party attendees. They also set up a check-point stop at the party entrance to make sure no one was drinking and driving. At the end of the evening, not a single fine or charge was made. Sgt. John Armstrong of the Lumsden RCMP later commented that” it was well-received, and they sort of all swarmed to us. We handed out the chips and salsa, and they loved it. They couldn’t believe that we had come through on our promise.”[3]

Being a Zamboni driver for a day!

Also in 2015, an ice hockey game played in Sainte-Anne-des-Chênes, Manitoba, had to be canceled prematurely when the heavy Zamboni ice cleaning machine damaged the rink in between periods. As it turned out, the Zamboni driver was found to be drunk.

The driver was ultimately charged with driving while impaired and resisting arrest after allegedly crashing into the boards surrounding the ice rink. “On his first lap, he struck the gate where the Zamboni drives onto the ice, broke the boards, and also broke pieces off the actual Zamboni,” said Martin Kintscher, the team manager of the bantam Seine River Snipers.

The RCMP was called, and the driver was taken into custody. “As far as I understand, he refused the breathalyzer, but I don’t know anything of what happened after that,” Kintscher said. Kintscher said he has seen rookie Zamboni drivers make mistakes on the ice as they learned their trade, but this event was unlike anything he’d ever encountered. He explained to the boys on his team that the Zamboni driver “had issues.”[4]

In 2015 (a bumper year for odd news out of Canada, by the look of things), three men from Montreal, Quebec, were convicted and sentenced to up to eight years in prison for their part in a 2012 heist of some 2.7 million kilos (5.95 million pounds) of maple syrup. The massive quantity of the sweet, sticky condiment was reported missing after a routine inventory check of the warehouse facility in which it was being stored. Barrels of syrup were found to have been drained and replaced with water.

The multi-jurisdictional effort to solve the crime involved multiple law enforcement agencies, including the RCMP, the Canada Border Services Agency, and U.S. Immigration and Customs Enforcement. Officers interviewed over 300 people in the maple syrup industry in Quebec, Ontario, New Brunswick, and the northern United States. Promising leads eventually lead to the recovery of approximately two-thirds of the missing syrup. They also seized several vehicles suspected of being used in the trafficking of the sweet, sticky spoils, as well as equipment such as scales and electronic lifting gear.

The street value of the swiped syrup was estimated to be some CAN$ 18 million. Or, as it was explained, the stolen amount would have provided a one-tablespoon topping for a whopping 183 million pancakes.[5]

5 A Most Canadian Car Theft

Is your keyless car easy to steal? – Which? investigates

Two doctorate students have apparently proven that Canadians are, in fact, more polite than their southern counterparts. Comparing the top ten percent of words used in millions of geotagged tweets, they determined Canadians are more polite than Americans, even on Twitter. It turns out they are also very courteous when they “steal” cars.

In December 2018, a woman in Hammonds Plains, Nova Scotia, returned from shopping to where she’d parked, only to find that her vehicle had been stolen. She told responding RCMP officers that she’d parked next to an identical white Hyundai Santa Fe.

It turned out that the driver of the other SUV had simply gotten into hers and driven away. RCMP Corporal Dal Hutchinson explained that neither vehicle was left running in the parking lot and that some push-button start vehicles can be started without the keyless fob actually being in the vehicle.

The “thief” eventually realized his mistake and returned the SUV to its rightful owner, but not before he’d already filled it up with gas. And of course, since this is Canada, the woman reimbursed him for the fuel cost.[6]

The “Festival of Snow” is a popular, family-orientated event that takes place in a Montreal park over four weekends every winter. According to its official website, the festival has the expressed aim of “discovering and celebrating the joys of winter.”

In January 2019, the event had to be canceled for the first time in over a decade because of a snowstorm. Environment Canada had predicted that the temperature would drop to somewhere around -15°C (5°F) but would feel more like -29°C (-20°F), given the wind-chill factor.

You know it has to be a doozy of a storm when it’s too cold and snowy for even Canadians to venture out in the conditions—especially to celebrate winter. Festival organizers said they made their decision because of “glacial cold, wind gusts, and dangerous roads.” Brr![7]

3 A Hockey Game Breaks Out

Drivers in Canada play hockey while stuck on highway

It was the late comedian Rodney Dangerfield who said, “I went to a fight the other night, and a hockey game broke out.” In this case, it was a massive highway pile-up that got proceedings underway.

In January 2019, on Highway 40 near L’Assomption, Quebec, some 45 kilometers (28 miles) from Montreal, an estimated 40–50 cars (some reports put the number of vehicles as high as 75) were involved in the huge crash in wintery conditions. Several people suffered minor injuries due to the accident, which also caused the highway to be closed for several hours while the lanes were cleared.

While waiting for emergency crews to re-open the road, a group of people made the most of the snow and ice-covered highway with an impromptu game of street hockey. Of course, this is Canada, and it was winter, so needless to say, plenty of folks had skates, sticks, and pucks in the cars, ready to go. While video footage of the impromptu game went viral, the final score is unknown.[8] 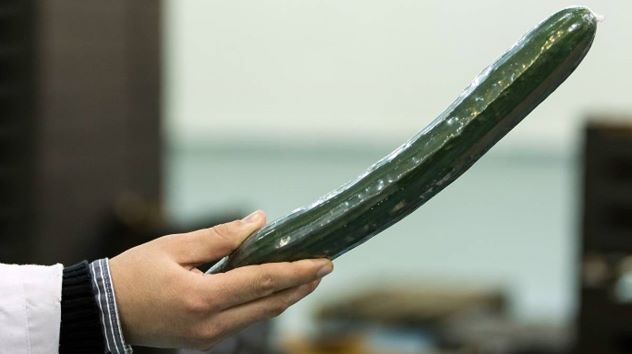 In May 2017, 49-year-old Fredrick Davis was caught doing an indecent act in a Toronto library while holding a cucumber in one hand and his own… uh… cucumber in the other. Police later explained that Davis first committed the dodgy vegetable felony in the Agincourt Library in April but got away at the time. However, when Davis showed up again the following month with another cucumber in hand, an eagle-eyed staff member at the library was quick to call the police.

When asked if Davis had threatened anyone at the library, Constable David Hopkinson was quick to reply that “I don’t think he had any free hands to make any threats.” Davis was ultimately charged with one count of committing an indecent act.

In June 2013, a man in Dartmouth, Nova Scotia, was accused of producing his own “special sauce” at a McDonald’s restaurant. Halifax Regional Police officer Constable Pierre Bourdages gave some truly excellent advice to any members of the public who find themselves witnessing such an indecency occurring, explaining that “we strongly suggest for people not to take the matter into their own hands.”[9]

The 2012 NHL lockout saw hockey fans swapping out scoring goals for hitting a home run if they could, with a surge in sales of sex toys, sex guides, and lingerie. Some retailers estimated their sales rose over 15% during the first two months of the lockout.

“We’d be gearing up [for NHL hockey] now, but there’s nothing, so I guess we need to find some better ways to spend our time,” explained Vinay Morker, the owner of Hush Lingerie and More in Edmonton. However, the jump in sales may have simply been part of the global trend, where sex toys and accessory sales have continued to rise. Stefan Dallakian, the owner of Paris Intimates, theorized that “at a time when unemployment is high, and bank account balances are low, people are passing the time by getting busy.”[10]