Marriage is a beautiful thing. But, sometimes, things just don’t work out. For ordinary people, a divorce is usually a private affair, but to celebrities, a painful breakup can become trending news in minutes. If you’ve been asking who has the record for the shortest marriages in history, you’re in for a wild ride.

Let’s take a look at the ten shortest marriages in history that might make you think twice before walking down the aisle.

This top-ten list kicks off on a sour note, although no divorce or breakup is ever really sweet. When Evelyn Lozada married Chad “Ochocinco” Johnson, she pictured a beautiful life in the limelight. They even had a VH-1 reality show in the works where they planned to star together as lovers.

Sadly, the two entered into an argument on one fateful night, after which Johnson allegedly “head-butted” his wife. Lozada, who was hospitalized after the incident, filed for divorce three days later. Her main reason for leaving was the valid argument that she couldn’t tolerate domestic violence. She hoped that her courage would encourage other women to break their silence.

As with all public scandals, the controversy surrounding the domestic incident led to VH-1 pulling out of the planned show. The ripple effects worsened when Ocho was subsequently dropped by his NFL team, the Miami Dolphins.

Sometimes, you can also meet the love of your life at a bar. That’s exactly what happened to Charlie’s Angels star Drew Barrymore when she met Jeremy Thomas.

Barrymore met Thomas, an LA bar owner, in 1994. Six weeks later, the smitten bartender popped the question. While most romantic fellas plan a proposal for weeks, Thomas went to his knees and asked Barrymore to marry her in an alley at 2 am. Of course, Barrymore said yes and went ahead to organize a quickie ceremony three hours later!

The two formalized their whirlwind romance by 5:30 am the same day after paying the officiant $20 more than the usual going rate. Sadly, things started falling apart after the wedding, and while they had planned to go honeymooning in Hawaii, Barrymore left for the islands alone.

Thomas only found out she was in Hawaii after she called him later! Barrymore would later cite “irreconcilable differences”—not her film but their incompatibility—as the major reason behind the divorce.

What would force someone to end a marriage held in Las Vegas? A wild trip to find marijuana on the wedding night is one reason that tanked Sinead O’Connor’s marriage to Barry Herridge.

Sinead O’Connor is an Irish singer-songwriter, and when she decided to tie the knot with Herridge, they did it the Vegas way—suddenly. According to O’Connor, the problems with their marriage started three hours after the ceremony. They embarked on a “journey” to find marijuana since Sinead didn’t drink, but the experience rubbed the new groom the wrong way.

As a career psychotherapist, Herridge worked with people battling substance abuse. Perhaps, the drug hunt was a little contrary to his values. Sinead later shared that Herridge’s friends were against their union even before the wedding. The two were from different worlds, an ingredient for disaster. Sinead shared that she decided to end her marriage because she loved him too much. She needed to “set him free.”

Celebrities are known to make hobbies of relationships and marriages, and every so often, the biggest stars are part of the dialogue. Eddie Murphy has five baby mamas in the entertainment industry, and when he married Tracey Edmonds, many wondered how long it would last. As it turns out, 14 days was the new record.

Gladly, the marriage didn’t end badly since nobody actually signed the marriage certificates first. Eddie Murphy and Tracey Edmonds exchanged vows in the Bora Bora region of French Polynesia. The beautiful wedding on a private island is an industry staple, but as it turns out, they needed to finalize things in a formal wedding in the U.S.

After a tumultuous two-week honeymoon, the two jointly decided to forego the ceremony that would make their marriage legal. In a statement, the couple said that the ceremony in Bora Bora was a testament to their friendship, deep love, and respect. They chose to remain friends, and maybe, this is beneficial to them both, given how long marriages last in Hollywood.

Lovebirds usually get married after short stints of dating, but sometimes, things can take longer. Pamela Anderson and Jon Peters first dated in the 1980s but married 35 years later. While most facts about their doomed marriage are surrounded by controversy, we know that their not-quite-official marriage lasted 12 days.

Jon Peters is a celebrated film producer, and his marriage to Baywatch superstar Pamela Anderson was a great twist in their long relationship. But, in what turned out to be a controversial war of words, both stars went their separate ways before signing their marriage certificates. Sharing why the almost-marriage didn’t work for him, the A Star Is Born producer claimed that he needs “a simple life and not an international love affair.”

Before things turned south, Anderson had shared that Peters had always been there for her and “I’m ready now, and he’s ready too.” But that’s just the thing about marriages’ you can prepare all you want, but you can’t control how things eventually turn out.

Dennis Rodman was stunning as a defensive/rebound basketball player, and as one of the greats, anything he does is worth reporting. Rodman graces this list because of his marriage to Carmen Electra, which lasted nine days.

But, before they decided to marry, Electra and Rodman had a great relationship. The electric relationship between Electra and Rodman started when they met in Los Angeles in 1998. The two enjoyed the bliss of random dates and endless calls as Rodman wooed a smitten Electra. By November 1998, the two took a trip to Las Vegas that ended at the famous Chapel of the Flowers.

At the chapel, the two got married in an event that made headlines globally. Sadly, nine days later, Rodman filed for an annulment, citing that he had not been of sound mind. Perhaps, their short marriage comes with a stern lesson—don’t get a quickie marriage in Vegas.

Woman divorces husband after a week because his penis was too big!

Couples get hitched after dating, and sometimes, religious spouses save the best stuff for the wedding night. In Nigeria, a couple divorced after the woman discovered that her husband’s… member was too big.

While bigger is usually better, Aisha Dannupawa discovered that her husband’s appendage was too gigantic for her to handle. Speaking to the Islamic court in Zamfara, Aisha claimed that intimacy with her partner was too painful of an experience. For the disconcerted woman, even the herbs she had solicited from her mother couldn’t help her cope.

Of course, when asked whether he had any opposition to the divorce request, the gifted groom had nothing to say. He didn’t deny the claims, and we all probably know why—he was suffering from success. Marriage should be a place where everyone is comfortable, and if she didn’t feel at home, there was no reason to keep going.

Nicolas Cage is one of the most famous actors of modern times. So, naturally, we need to know why and who he’s dating at all times. While he’s kept most of his relationships under the wraps, his marriage to Erika Koike blew the shutters wide open. The low-profile marriage (in Las Vegas, of all places) was a culmination of a great relationship between the star and a make-up artist.

Opening up about the marriage, Nicolas Cage revealed that there were several reasons behind his decision to annul the event after four days. The National Treasure actor shared that both of them had been intoxicated before the wedding. He also added that he was unaware of Koike’s relations with another party.

Still, Cage revealed that he was “upset” with the outcome of the event, which was also his fourth marriage.

We all have the idea that weddings should be all about pomp and flair. Britney Spears is a pretty famous person who once did the unthinkable: She showed up to a wedding in blue jeans, a bare midriff, and a baseball cap. Of course, she’s not here because she was arrested by the fashion police—she’s on the list because she asked for an annulment just 55 hours later!

Spears and Alexander exchanged vows in a little white wedding chapel in the best nightlife city… Las Vegas, of course! And this is one story that the tabloids gobbled up like Thanksgiving dinner. Sharing his side of the story, Alexander revealed that Spears flew him out to Vegas, and when he landed, he was hoping for a good time. As it turns out, things were better than good—they were Vegas crazy.

In an ironic twist, what happened in Vegas didn’t stay in Vegas… at least not once the couple shared the news with her family. After Spears phoned home to say that she was now married, her mother and managers were shocked. The wedding had no prenup, and Spears asked Alexander to sign the annulment papers after intense pressure.

Britney Spears would later describe the short marriage to Jason Alexander as a time when she was “being silly, being rebellious.” 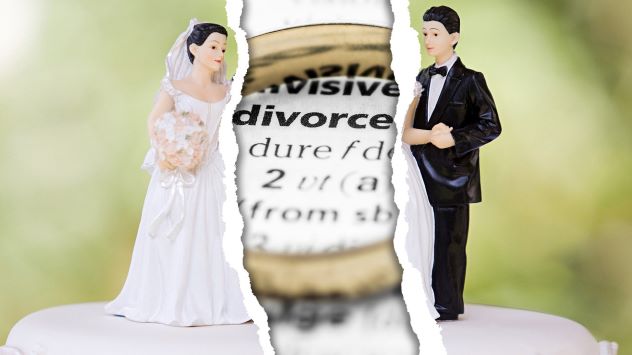 The pair that takes the crown for the shortest marriage in history is, shockingly, not a celebrity couple. In a story that shook the internet, a Kuwaiti couple divorced less than three minutes after tying the knot.

Marriage is meant to last a lifetime, and in those that work, respect is key. For this Kuwaiti couple, the first three minutes of the marriage showed that they were incompatible. According to reports on the event, the couple had been married in front of a judge, and after they left, something unfortunate happened. The bride tripped and fell on the cold hard floor.

Any new groom would have rushed to rescue his princess, but in this scenario, the knight in shining armor called her “stupid.” A single ridiculous and cruel moment after the wedding bells is not something a bride welcomes. Right after, the bride rushed back to demand a divorce. While we’re definitely stunned by this short marriage, you can imagine how the judge reacted to the fast and furious bridal take-back.