The world has gone absolutely crazy for superheroes. There are tons of superhero movies in production and an endless supply of comic books as a ground zero source of inspiration. The comic industry has tried to capitalize on the success of heroes such as Batman, Spiderman, and Wonder Woman, but the results are not always so super.

Our list below will cover ten heroes whose powers are seemingly pointless. With so many attempts at creating new heroes, they can’t all be winners. Jazz, Squirrel Girl (seriously?), and the Almighty Dollar are just a few of the incredibly silly heroes that have been created over the years. Some of them even have catchphrases that are worse than their names and powers. Maybe these comic book editors are the real supervillains. So hunker down in your own “Fortress of Solitude” and get ready to marvel at some of the most pointless powers ever put in print.

Related: 10 Superhero Actors Who Have Their Own Tragic Backstories

Who Is Hindsight Lad?

Hindsight Lad! Just saying his name brings a smile to my face. Marvel Comics created this hero. His name is very appropriate, and his powers are very pointless. Hindsight Lad has the incredible power of (you guessed it) hindsight. After various missions with his superhero pals, Hindsight Lad analyzes and understands how events could have played out differently. I guess his hindsight is 20/20?

Clearly, Marvel was scraping the bottom of the barrel when they came up with this one. To be honest, Hindsight Lad seems more like an annoying friend than a superhero. What’s next? Back-seat driver guy? The Grammar Corrector? Some of the other heroes on this list have even more pointless powers.

Cypher has one thing that many heroes on this list do not: a cool name. With such a great name, it is too bad that his power is seemingly pretty useless. Cypher is one of the X-Men, like Wolverine, Storm, and Cyclops, but his power lies in linguistics. His mutation is that he can understand every language. While that may have seemed cool (or at least useful) at the time, now that we all walk around with Google translate in our pockets, he seems totally useless.

It seemed that Marvel came to the same conclusion in 1988 when he was killed off in a comic book. It turned out his story was not over because he came back to life in 2009. I think that a mutant power to understand different languages would barely qualify you as an X-Men, but I guess Professor X had to get his enrollment numbers up. Cypher’s very specific and rarely useful power makes him one of the most pointless heroes of all time.

Squirrel Girl, Gwenpool, and the Power of Comics

Yep, seriously, there is a comic book hero named Squirrel Girl. I am convinced that they only made this character because the name rhymes. There is certainly no other rhyme or reason to this character. Squirrel Girl is kind of like Aquaman, except her powers work above the ocean, and she can only communicate with one kind of animal: squirrels.

If you are in a squirrel or acorn-related emergency, this is the hero you want coming to your rescue. Otherwise, she is pretty worthless as far as heroes go. Squirrel Girl also takes on some of the powers of a squirrel. She can chew through wood, has a tail (for balance, I guess?), and has sharp claws. Squirrel Girl is a member of the Great Lakes Avengers, alongside another pointless hero on our list. Some of these heroes are crazy ideas, no doubt, but the creator of Squirrel Girl must have been totally nuts. 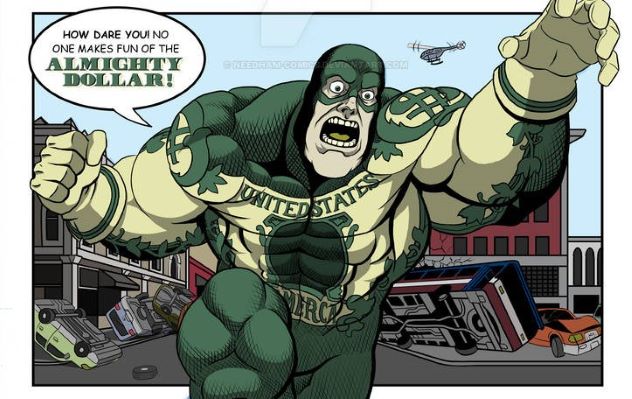 Almighty Dollar can shoot pennies out of his wrist. Not only are his powers underwhelming and his secret identity not very secretive, but Almighty Dollar also has a cringeworthy catchphrase. When he’s hunting down his enemies (tax evaders?), he says he can “throw money at my problems.” As you may have guessed, this character did not stick around for long, and customers didn’t want to throw any pennies, much less dollars, at these comics.

Many of the most recognized heroes from comic books are from the two biggest publishers, Marvel and DC. The next hero on our list was a creation of a much smaller company, Image Comics, as a part of their “Youngblood” series. At least, apparently. Badrock looks suspiciously familiar. This is because he is basically a copy of a much more famous hero, Marvel’s Thing. This means that his powers include super strength and resistance to damage.

However, this was not the only aspect of Badrock that Image Comics ripped off. Initially, Badrock had a better (or at least more logical) name of Bedrock. The creators of the Flintstones cartoons (Hanna-Barbera) contacted Image Comics, and they quickly changed the name to Badrock. Badrock’s catchphrase? “Yabba dabba doom.” Yikes. I think it is fair to say that the character of Badrock was yabba dabba doomed from the start.

Comic books and comic book heroes thrive on their unique qualities and creativity. Badrock had neither and simply made for a pointless hero.

Who is Marvel’s Phone Ranger

A.G. Bell was just an ordinary telephone repairman. Yes, kids, that used to be a real job. He would travel from house to house, repairing home telephones. Until one day, his life totally changed! A.G. Bell was helping a customer fix their phone when he realized that the phone contained a message from an alien race. A.G. Bell created a super suit and a new persona using this alien technology. This is the origin story of the Phone Ranger, another Marvel hero on our list.

The Phone Ranger’s suit enabled him to connect to any telecommunications device. This allowed him to respond quickly to emergency calls. Unfortunately, his lack of useful powers led to an early death. While the Phone Ranger may have seemed like a cool idea at the time, looking back, it seems ludicrous. His special power was connecting with phones. Don’t phones do that anyway? While his origin story was much better than most on our list, the Phone Ranger’s powers were seemingly pointless and even laughable.

The next hero on our list is one with regional roots. He is the hero of the state of Arkansas. Or he was designed to be, at least. Buford Hollis was a truck driver before he became the hero Razorback. Razorback has multiple powers, all of them with questionable utility. First, he has the “power” to drive, pilot, or operate any vehicle. He always names his vehicle “Big Pig.” While this is impressive, is it really a power?

His other power relates to the large hog head he wears as a head covering. It is electrically charged. Razorback is a clear attempt to pander to the state of Arkansas but was unsuccessful. Despite the best efforts of Marvel writers, including featuring Razorback in comics with Spiderman, She-Hulk, and other famous heroes, Razorback never achieved any of the same popularity. Maybe that is because he is a glorified cab driver with a silly hat. 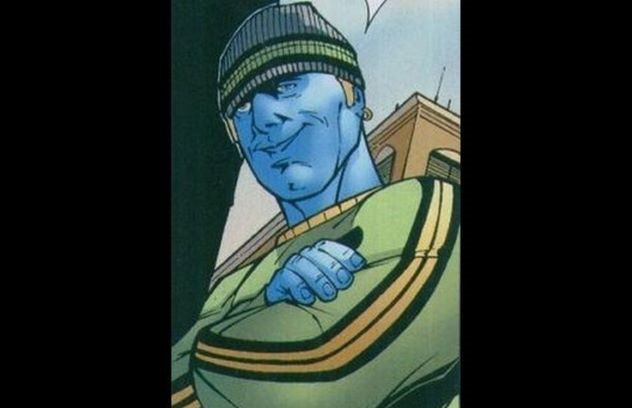 Jazz, or John Arthur Zander, is another Marvel hero with pointless powers. Jazz’s father was a genetic mutant who did not feel pain. Because he was not visibly a mutant, he could live in normal society. However, Jazz was not so lucky. He was born with blue skin. Maybe this was not so much of a “superpower” and was more of just a skin condition.

Jazz had a tough story arc throughout Marvel comics. First, he left home at 16, trying to become a famous rapper. He must not have been that great of a rapper because he was unsuccessful and eventually started dealing drugs instead. Finally, in one of the most pathetic deaths of a hero in comic history, Jazz was killed by another mutant, Johnny Dee, who created a voodoo doll of Jazz. Despite being branded as a mutant, Jazz had no useful powers and just suffered because of his blue skin.

The next hero comes to us from another planet. Hepzibah is a Mephitisoid species, which means she is a humanoid with skunk characteristics. In fact, Hepzibah is not even her real name. Her real name cannot be pronounced because it is a series of smells. Hepzibah is a nickname by another comic book character, Corsair. Her powers are as strange as her name and origin.

She is acrobatic and has superhuman night vision and smell. Most uniquely, she can emit pheromones. Hepzibah has been embraced by the furry community for her animal characteristics, but overall, her powers are pretty useless. She definitely has an unforgettable look with a huge skunk tail. In recent comics, she has become more like a cat and less like a skunk. Her ears and tail may have changed over the years, but her powers remain mostly useless.

Who is Marvel’s Mr. Immortal? The Only Known “Homo Supreme” Being.

The last hero on our list has a pretty dark origin story. As a young man, Craig Hollis was tricked into starting a fire by the villain Deathurge. The fire ended up killing both of Hollis’s parents. This obviously left Hollis feeling depressed. His depression led to suicide attempts. When Hollis realized he could not kill himself, Mr. Immortal was born.

He began to try and fight crime on his own. Eventually, he formed the Great Lakes Avengers along with Squirrel Girl. Mr. Immortal, as you might guess, cannot die. When he does, he is quickly resurrected, often with fits of rage. While this is certainly an amazing power, it is not very useful compared to flying, super speed, or superhuman strength. Mr. Immortal’s origin story is a sad one, and so is his superpower.