Every year the number of released movies and TV series based on graphic novels is only increasing, and the major studios have begun to show more and more interest in unusual and peculiar works. Graphic novels perfectly combine the best qualities of books and comics. This symbiosis allows them to become unique creations: Sin City, V for Vendetta, and Happy! These are the most famous examples later adapted into films.

Each of the following ten graphic novels is distinct in its own way, from horror to thriller, from comedy to drama, and from a sense of hopelessness to utter madness. These works are far from popular; in fact, you probably haven’t heard of most of them. However, a movie adaptation or TV series format would allow viewers to see previously unknown stories and experiences, opening up this genre to a broader audience.

10 Through the Woods (Emily Carroll)

Through the Woods by Emily Carroll | Spook Review.

In Through the Woods, five short stories are subtly linked together. Each one is centered on a horror, which we don’t see but surrounds us. It is a horror that hides from us in every possible way. The forest is what binds the stories together, serving as the conduit of horror and suspense. Different characters fill the narrative, including three sisters who stay in a small cabin in the middle of the forest while their father is out hunting, a young woman who is forced into marriage, or the grim tale of some creepy beast. The main feature of these stories is scary things that suddenly happen when you don’t expect them, which scares us the most.

The format of the different stories subtly connected would be perfect for a TV mini-series, each episode filled with its atmosphere, its own pace of narration, but somewhere more mysterious and more sinister.[1]

It’s rare to find good horror movies these days. A Harrow County adaptation could fix that situation, and here’s why.

The focus of this novel is a teenage girl, Emmy, who discovers a terrible truth about her home county of Harrow. At one point, the young girl’s life changes dramatically. She is suddenly immersed in the horrors of her hometown, creepy places full of horrible monsters, like a Civil War cemetery filled with a pack of burning skeletons. Emmy constantly struggles with her horrible imagination and crazy reality, so it’s common for her to stumble into an ordinary box in the dark and see an almost dead boy on the floor. An everyday object can suddenly turn out to be something creepy and insane.

The whole work is created in the best traditions of Southern Gothic. It connects the reader with the features of magical realism, where the line between good and evil is blurred, and what you just thought was just an ordinary thing is ready to kill you. A touch of the ordinary that turns into madness. Its 32-issue run would work well for a streaming service’s series.[2]

Earth has been destroyed by humankind, and a small group of survivors tries to find a new planet for their home. On their way to their goal, they will have to figure out how to do it without dying because space is full of dangers and surprises. Fortunately, the humans have a ship filled with sophisticated technology and unique artificial intelligence that suddenly gained awareness. Unfortunately, the long voyage is also a great challenge to psychological health, complex moral experiences, and nervous breakdowns. Perhaps that is what will be more dangerous than space.

This is a classic space science thriller, done in the best traditions of the genre, but it has some unique features. This mainly includes its high level of realism when it comes to violence because this work sometimes feels like it has entered the horror genre. This synergy could only really be revealed in a movie, something like Passengers—only in a darker style.[3]

Blythe, an ordinary flight attendant of a fictional airline, is oddly afraid of heights. So when she finds herself in the middle of a struggle to control the next Aztec technological innovation, she discovers that she is a “hyperpract,” one of the rare people suited to use the new gadgets. With it, she can enter a reality where images matter more than tangible objects. In particular, she can move an airplane to another area without using fuel.

During the narrative, it may feel like an action movie, but after a few pages, it feels more like a love story. Then, further into the story, it reads more like a thriller.

A crazy piece of work that borders on insanity and ordinariness. This is exactly the kind of thing modern audiences need, especially those who are tired of the banality of the plot and the stereotypical characters currently found in film and TV series.[4]

This is a noir-style story that revolves around Josephine, a model femme fatale. Men lose their minds around her. Horrible sectarians think she should be given over to their divine beings. One of the protagonist’s biggest problems is her amnesia, which constantly interferes with her life and creates frantic forgetfulness and a bunch of unnecessary problems for her. The graphic novel spans many years, but the main plot takes place in the present day. As the reader learns, Jo’s life is full of men interested in her, but later they all pay the price for getting involved with her.

The amazing blend of horror and crime is lacking in current movies, so an adaptation of this graphic novel would do a great job of correcting this oversight.[5]

The Pro centers on a woman of easy virtue who suddenly gains superpowers and joins the local superhero team. This amazing woman lady kicks bad guys’ a**es in the morning, picks up her son from daycare in the afternoon, and sells herself at night. But in a twist, the local superheroes are not good guys. They will certainly save you if something happens, but if you hurt them, they will destroy you, they don’t care about morality because—duh—they have superpowers.

With plenty of profanity, violence, lust, and gray morality, this is a crazy parody of the superhero genre. Kind of like The Boys, only a little weirder and a lot more depraved.[6] 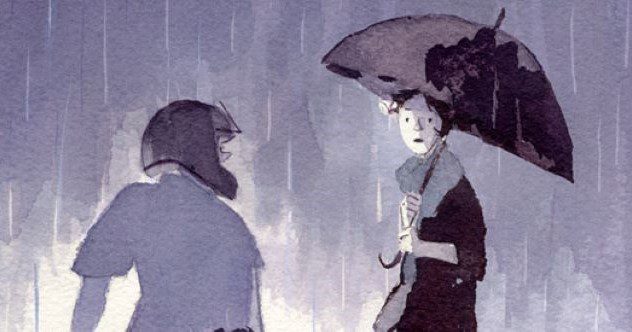 Piero and Nicola are best friends. But both guys are fixated on the mysterious girl Lucia, who lives in the same apartment complex. A love triangle is the starting point that binds these characters. The story jumps in time to reveal that Piero and Lucia are now separated not only by time but also by 5,000 kilometers. Their separate lives, fraught with terrible circumstances, merge once again briefly. In the aftermath, the thousands of miles that separate them only put oil on the fire.

Admiration and disappointment, love and hate—things that permeate this story from beginning to end in a chaotic order, shattering love stereotypes along the way. An unconventional look at love and romantic attitudes is something we are lacking in cinema right now because love in real life is often not as portrayed in films.[7]

Grant Morrison’s THE INVISIBLES (what is it?)

The Invisibles is about an anarchical group of people who fight against creatures from other universes who have taken over half the world. Jack Frost is the new reincarnation of Buddha, Lord Fanny is a transgender girl, King Mob is the most important guy on the team, and a few other extraordinary personalities round out the group. These guys have to figure out a way to succeed in beating the intruders. On the way to their goal, they will have to travel through time, learn magic, kill, and, oh yeah, smoke pot.

Anarchy and freedom or order and slavery? Such questions will have to be answered by each character, but will they be able to choose the right answer? Only time will tell.

Absurd satire on society seasoned with extravagant characters and crazy scenarios, such plots would fit perfectly into the plethora of production options in the media industry today.[8]

This novel tells three related stories set in a small Canadian town. The first story focuses on a boy who now lives with his uncle due to the death of his mother. The second story is about two brothers playing hockey and the difficult relationship between them, and the third story is about a perpetually disgruntled nurse who takes care of sick people.

The main feature of this graphic novel is the image of ordinary life covered by the heaviness of life and oppressive feelings of depression. Trapped in this town as if in a cage, the characters are deeply unhappy/ Trying to change their lives, they look for meaning in hockey, in God, in comic books, but every time, something terrible happens, forcing them to sink into a new wave of apathy.

This work would make a great strong psychological thriller. You don’t see this kind of genre enough nowadays, but I think that’s worth fixing.[9]

1 On a Sunbeam (Tillie Walden)

This graphic novel tells the story of a girl named Mia. The story is introduced in parallel in two-time lines, the past and the present. In the present, Mia becomes part of the crew of the spaceship “Aktis,” where her job is to find ruined architectural objects in the deep parts of space and restore them. She is aided in this complicated task by Jules, a chatty and obsessive girl. Because of the great distances between objects in outer space, the characters become very close to each other, which risks growing into something more than a friendship. Parallel to this, the narration of the past events is introduced. Mia attends an elite school, where she learns everything she needs to in life through her first love, mean classmates, and local sports competitions.

This is a hidden gem of a space adventure with a bit of an unconventional love story thrown in. Race, gender, and religion are unimportant things in space; only whether you’re a good person matters. Such topics are now more relevant than ever, and sometimes, it is easier to talk about them in the form of art.[10]