Nero is one of the most controversial emperors in Roman history. His rule was marked by violence, extravagance, and tyranny. He was definitely a cruel, heartless emperor, and very few would question this claim.

However, many people don’t know that he also had some positive qualities as a person and ruler that have been overshadowed by his violence and enraged nature. Nero did many positive things for Rome during his early reign. He was quite a good leader and won the love of the Roman people. Later, he became a really cruel man… but that’s another story.

Related: 10 Facts That Show Why Caligula Was Rome’s Craziest Emperor

Is Nero Innocent Of Burning Down Rome? | Blowing Up History

Believe it or not, during the fire in Rome, Nero was a very generous leader and helped rebuild Rome after the devastation.

In AD 64, a great fire destroyed much of Rome, leaving hundreds of thousands of people living on the streets and countless Roman citizens dead. Nero was no stranger to this tragedy. He was outside Rome and returned immediately to take charge of the situation.

Despite his reputation as a tyrant, Nero was quite kind to the Romans, who lost everything. He often went out of his way to help those in need, even providing food to the people. And after the fire, he improved the infrastructure of Rome and made many reforms that enhanced the urban design of the “eternal city.”[1] 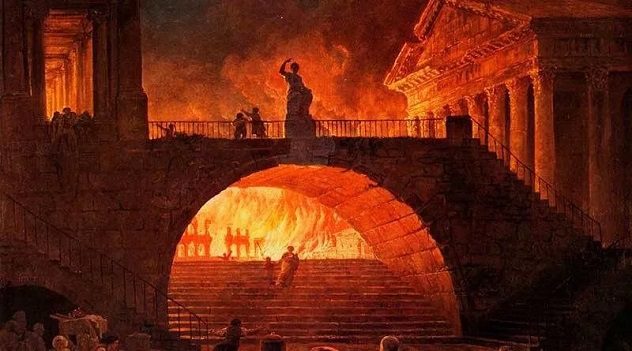 Nero is one of the most infamous rulers in history, thanks in part to the legend that he “fiddled while Rome burned.” But, it later turned out that he was not even in the city—and that it was probably an attempt of the Senate to discredit him.

One thing that has never been in question is that after the fire that devastated Rome, Nero took the opportunity to set some new urban rules for Rome. He decreed that all buildings must be constructed of brick or stone, with tiled roofs to prevent future fires.

He also created wide streets and open spaces to help improve circulation and prevent congestion. Thanks to Nero’s urban planning, Rome emerged from the ashes as a safer and more efficient city that has never experienced a fire of the same proportions in its history.[2]

How They Did It – Paying Taxes in Ancient Rome

Nero completed a significant tax reform during his reign. He inherited a government that was deeply in debt. He realized that the best way to raise revenue was to encourage economic growth and also please the people who would love him even more by having a significant reduction in their taxes—although this would earn him the hatred of the Senate.

To this end, he lowered taxes on businesses and individuals, making it easier for people to earn a living. He also implemented a series of public works projects that created jobs and boosted the economy.

However, after the fire, he changed the Roman economic policies to rebuild the city, increasing taxes again to deal with the disaster Rome had to face.[3]

7 He Built the Biggest Roman Palace at the Time: The Golden House or Domus Aurea

After the fire, Nero built many new public buildings and monuments. But the most impressive was the Golden House, a lavish palace that was one of the most luxurious buildings ever built in Rome.

In fact, he was an ambitious builder who left a lasting legacy in Rome. The palace, or Domus Aurea, was a massive complex constructed in what would have been the remains of a neighborhood consumed by fire and burned to ashes.

However, the construction of this palace was seen as a bad joke as he took advantage of such a huge tragedy to build the palace. It quickly became one of the most talked-about buildings in Rome. Some contemporaries praised Nero for his vision and engineering prowess. In contrast, others denounced him as a megalomaniac who had squandered public resources on an extravagant personal project that was far from being the priority.[4]

How Nero’s Acting Ambitions Turned Romans Against Him

Nero was also a great patron of the arts. He encouraged artistic expression and supported many artists during his reign. He even composed music and poetry himself and, shockingly, performed in front of the people and senators! Although he forced his audience to listen to him, some recognized that he had some musical and poetic talent.

During his reign, he commissioned artworks by some of the most famous artists of the day, including a statue of himself, the Colossus of Nero.

Nero may have been a cruel ruler, but he was also an artist… And even at the time of his death, his last words were: “What an artist perishes in me!”[5]

What was a chariot race like at the Circus Maximus in Rome? The largest stadium ever built.

Nero was a big fan of athletics and did everything he could to support and encourage athletic events. He even was a charioteer himself and once won a chariot race at the Olympic Games… Of course, he cheated, and nobody dared to beat him.

In any case, he was a good athlete, and very few rulers can claim to have won the Olympic Games. In addition to participating, he enjoyed watching sports. So he promoted sports and their role in Roman society, resulting in the people filling the arenas to see the chariot races that flourished during the time of Nero.[6]

4 Nero Allowed Slaves to Complain Against Their Master

What It Was Like to Be a Roman Slave

In ancient Rome, slavery was a fact of life. Slaves were used for everything from manual labor to providing entertainment, and they had few rights. However, under the rule of Emperor Nero, slaves were allowed to file complaints against their masters when it was normal for slaves to be treated like animals.

This may seem small, but it was a significant step forward for the rights of slaves. Before Nero, slaves had no legal recourse if they were severely mistreated by their owners. By allowing them to lodge complaints, Nero helped to protect them from abuse and gave them a voice in Roman society.

This helped to elevate the status of slaves in Roman society and sowed the seeds for future reform.[7]

3 Millions of People Loved Him… Even After His Death!

Nero was a popular ruler of Rome despite the fact that he was not liked by the Senate. Millions of people loved him because he was very generous to the Roman people and a great entertainer.

Nero was indeed known for his generosity. He would often give money to the poor and help those in need. However, the Senate hated him, and they believed that he was too wasteful—and they were right.

Nero constantly demanded more money from the Senate, forcing them to kowtow to his every whim. As a result, the Senate saw Nero as a danger to their power and position and a threat to the stability of Rome itself, while in public eyes, he was a hero.[8]

As an artist, Nero had a great appreciation for Greek culture. He enhanced the culture by inviting Greek scholars to Rome and commissioning copies of Greek statues. Nero also built his Domus Aurea, incorporating several aspects of both Roman and Greek architecture.

By mixing the best of both cultures, Nero created a truly unique and spectacular setting.

There is no doubt that Greek culture had a profound influence on Nero’s life and reign. As emperor, Nero made sure that Greece remained an important part of the Roman Empire and the influence of Greek art and culture in Rome grew even further.[9]

1 His Diplomatic Abilities Ended the War Against the Parthian Empire

Nero also had a keen political mind, and he was often able to broker peace agreements with Rome’s enemies. One of his most famous peace deals was with the Parthians over the control of Armenia.

Nero oversaw a period of great peace and prosperity, in part due to his successful negotiations with the Parthian Empire (located in Iran, Afghanistan, and Turkey today). The Parthians were a major threat to Roman territory in the East, and Nero realized that it was in Rome’s best interest to reach a peaceful resolution.

He dispatched envoys to the Parthian court, where they successfully negotiated a peace treaty. This treaty allowed Rome to focus its resources on other areas, such as expanding its territories in Britannia.

As a result, Nero’s reign was a crucial period in Roman history, during which the empire achieved new heights of power and stability.[10]

10 Archaeological Discoveries That Were Made By Pure Chance