Archaeology reads like a book. Some chapters are mysterious, and others are littered with bodies from past calamities. But some stories are downright ironic. Discover the famous archaeologist who might have been a tomb raider, a bloody battlefield with one body, and how the first bird farmers didn’t start with the chicken but instead a deadly creature.

Here is a list of ten ancient discoveries… with a twist.

When shoppers load bread into their shopping carts, they know it’s a product of agriculture. Somewhere, a farmer grew wheat on a farm, and after some grinding, baking, and packaging, the bread landed on the shelf. In 2018, archaeologists discovered that the humble loaf wasn’t the product of agriculture. It was the other way around.

While excavating in Jordan, researchers found a flatbread made by hunter-gatherers. This nibble was 14,400 years old. The age was significant because agriculture wouldn’t come into practice for another 4,000 years. Interestingly, the flatbread’s ingredients included the wild ancestors of domesticated cereals like oat, barley, and einkorn. Researchers believe this early form of bread, which was also prepared from a grounded, sieved, and kneaded dough, eventually encouraged people to farm cereals.[1]

Paintings and movies depict medieval warhorses as large and robust animals. But according to a large study, the reality was different. Instead of rippling with bulging muscles and towering over a giraffe, the average warhorse was significantly… well, reduced.

The study analyzed the biggest data bank of English horse remains. The bones came from 171 archaeological sites and belonged to animals that had lived between AD 300 and 1650. Many of the horses were under 14.2 hands high (4.8 feet or 1.4 meters), which technically made them ponies.[2]

8 Not All Ancients Loved Gold 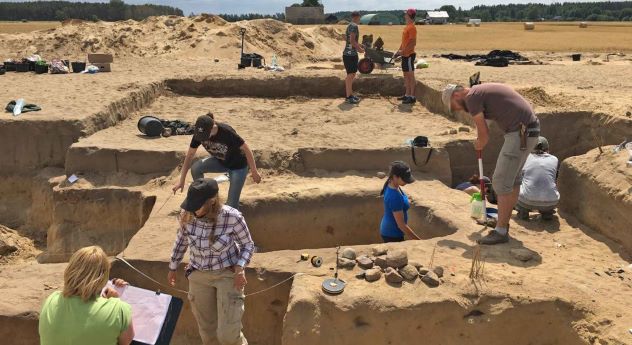 The love affair between humans and gold is ancient. The precious metal is so widely revered in modern times and throughout history that it’s hard to imagine any civilization that doesn’t value gold. But according to archaeologists, this happened to a group of people who, ironically, produced some of the finest gold artifacts 4,000 years ago.

These communities were herders who roamed the lands between the Caspian and Black Seas. Despite being nomadic, they were expert goldsmiths during a time when most other societies hadn’t yet mastered the art.

But in 2021, when archaeologists studied 4,500 artifacts from the Caucasus, it showed that the civilization had a change of heart because gold had disappeared from their art and graves. Neighboring cultures continued to fill their own tombs with the precious metal, so it’s unlikely that the region’s gold was depleted. For some reason, the herders decided to reject this valuable commodity—for a whopping 700 years between 1500 and 800 BC.[3]

It wasn’t uncommon for some hunter-gather communities to express their frustrations violently. One particular group of fisher-gatherers in ancient Chile was no exception. When researchers looked at their skeletons, it became clear that people from this coastal area had punched the occasional face and also stabbed each other (but rarely fatally).

But around 1000 BC, changing weather patterns made seafood scarcer, and some people broke away to try farming. In the past, when hunter-gatherers upgraded to agriculture, most societies became more stable as food pressure reduced.
https://www.nationalgeographic.com/culture/article/neolithic-agricultural-revolution
But in Chile, things went the wrong way. Its first farmers tried to cultivate crops in the driest desert on Earth, the Atacama Desert, and probably due to scarce fertile land and dwindling resources, violence exploded. For centuries, they killed each other with knives, maces, and hunting weapons.[4]

In 1922, Howard Carter found the tomb of Tutankhamun—and instant fame. What made this burial so special was the fact that the site was untouched. For once, researchers had beaten looters to the prize. This was a surprising turn of events, as tombs were often looted soon after the person was buried, sometimes even just days.

Then rumors began that Carter had pocketed some of the treasure. As ironic as it would be to have a famous archaeologist loot the most remarkable royal tomb in Egyptian history, there was no proof. At least none that came to light during Carter’s lifetime. But recently, a letter surfaced that might prove his guilt.

Carter gave an amulet to Sir Alan Gardiner and assured him that the artifact wasn’t from the boy-king’s tomb. But when the amulet was assessed, experts told Gardiner in no uncertain terms that it had been stolen from the famous grave. In 1934, Gardiner wrote to Carter, lamenting the embarrassing position he now found himself in. However, he also assured the celebrity archaeologist that he never told anyone where he got the amulet.[5]

5 A Tsunami in the Desert

Chile has an unfortunate history of being manhandled by strong earthquakes. This is no accident. The South American country is located inside the notorious Ring of Fire, a region marked by scary seismic activity. Chile also has a long coastline, heightening the danger of strikes by quake-related tsunamis. Thus, in order to assess future risk, a comprehensive study looked at how often such disasters had struck Chile in the past.

The researchers discovered something remarkable. About 3,800 years ago, a monster earthquake struck the area. The 9.5-magnitude event also triggered a tsunami that crashed into the shoreline with waves measuring up to 66 feet (20 meters) tall. Ironically, this deluge hit the driest desert in the world, the Atacama Desert.[6]

Scientists Finally Discover the Origin of The Black Death

Europe was a grim place to call home during the 1300s. During this time, the world’s most infamous plague, the Black Death, is said to have killed nearly 50 percent of the region’s population. With such a high tally, modern perception is that bodies piled up wherever there were people.

In 2022, the Max Planck Institute completed a study that proved the notion wrong. Yes, the plague decimated certain cities, towns, and villages. But pollen showed that the devastation wasn’t the universal event across Europe that history buffs believed it to be.

The study gathered pollen from medieval-era farming crops and wild plants. Where crop pollen was abundant, agriculture flourished. Where wild pollen was low, people had cleared the land for farming. Since both agriculture and land-clearing depended on healthy people, the pollen could identify the areas that escaped the full horror of the Black Death. These lucky regions included Ireland, Iberia, and large swathes of Central and Eastern Europe.[7]

3 The First Bird Farm Was Deadly

Chicken farming became a thing about 9,000 years ago. But chickens weren’t the first to lend their drumsticks to domestication. Thousands of years earlier, humans chose another bird. Did they choose something as manageable and harmless as chickens? Nope. They tried to raise the world’s deadliest bird.

Cassowaries are large, dinosaur-like creatures. Armed with an anger problem and deadly claws, these birds can eviscerate and even kill humans. But recently, archaeologists found that our ancestors gave cassowary farming the good old college try. Although this line of farming went nowhere (eventually), fossilized eggshells from 18,000 years ago showed strong evidence that people from New Guinea stole cassowary eggs. Some appeared to have been cooked over a fire, but others showed signs of hatching, indicating that the chicks were possibly raised for meat.[8]

Were vanished Battle of Waterloo soldiers’ bones sold as fertiliser?

When Napoleon clashed with the Duke of Wellington at Waterloo, the two armies fought for eight horrifying hours. On that day, June 18, 1815, almost 50,000 soldiers met with an unfortunate end. The body count cemented the battle as one of the worst of the century, and written accounts also described how the dead were buried in mass graves on the battlefield.

But when archaeologists arrived, they found the opposite of what they expected. Instead of countless bodies, only one complete skeleton was ever found. How could such a deadly battle leave one guy? Where were all the mass graves, said to hold thousands of soldiers each?

In 2022, research suggested a possible explanation. During the 1800s, bone-meal companies in Europe used animal and human bones to make fertilizer. Thieves had no qualms about digging up bodies to sell to these companies, and mass graves, like the ones at Waterloo, were probably scavenged until they were empty.[9]

What Neanderthal DNA Is Doing To Your Genome

The first Neanderthal bones were discovered in 1856. As more remains were found and scientists did the math, it became clear that modern humans and Neanderthals had lived together in Europe for thousands of years. Then Neanderthals went extinct, and we forgot all about them for 40,000 years.

Artifacts proved that Neanderthals were highly intelligent, inventive, and cared for the vulnerable members of their society. But their genetics provided the most stunning insights. Not only were they 99.7% identical to humans, but the two groups also interbred.

Many people alive today carry between 1% and 4% Neanderthal DNA. Ironically, with a world population of more than eight million, there is currently more Neanderthal DNA in circulation than when the Neanderthals were alive.[10]