10 Things You Didn’t Know about the U.S. Coast Guard

Founded in 1790, The United States Coast Guard is the only military service part of the Department of Homeland Security. The U.S. Coast Guard is a branch of the United States Armed Forces whose primary responsibility is to maintain the security and safety of the U.S. people through the enforcement of maritime law.

Despite being one of the country’s oldest military organizations, many people still don’t know about the history and responsibilities of this military branch. Let’s dive right into ten things you didn’t know about the U.S. Coast Guard.

10 The U.S. Coast Guard Is Part of the Military

The U.S. Coast Guard is considered an arm of the military because, during conflict or war, the president has the power to transfer U.S. Coast Guard assets to the Navy. Additionally, the U.S.C.G. seniority ranks are similar to that of the Navy. The most senior Coast Guard officer is the four-star admiral Coast Guard commandant.

Over time, the U.S.C.G. has held various capacities, which include maritime law enforcement, search and rescue, environmental protection, aids to navigation, military readiness, and port protection.

9 The Coast Guard Has a Different Mission from the U.S. Navy

Sometimes people confuse the Navy for the Coast Guard because, at a glance, their mission feels similar. The truth is that the U.S. Coast Guard and the Navy have different capacities and responsibilities and, consequently, differing missions. The Coast Guard is an arm of the military tasked with maritime law enforcement. On the other hand, the Navy’s mission is to train, maintain, and equip a force that fights to maintain U.S. waters’ freedom and economic liberty. The Navy is an arm of the Department of Defense.

There’s also a significant difference between the U.S. Navy and Coast Guard duty stations. The Navy has bases worldwide and deploys members depending on their specialty. For example, if you’re a Navy aviator, you could be based in San Diego but operate an aircraft that can go anywhere should the situation demand. The Coast Guard’s duty stations have air stations and other bases to coordinate their asset activities. They also have stations along the U.S. coastline to ensure timely responses to rescue missions and other maritime emergencies.

8 The U.S. Coast Guard Deploys Its Members to Accomplish Its Mission

The U.S. Coast Guard can deploy members to serve in different missions. Time away can range from a few weeks to several months, depending on the demands and operations of the task. The deployment history of the U.S. Coast Guard dates as far back as 1790, having participated in major U.S. conflicts, including World War II, the Vietnam War, and Operation Iraqi Freedom. Overall, the U.S.C.G. has actively participated in 17 wars and conflict missions.

Still, under deployment, it’s essential to note that the Coast Guard is the oldest marine enforcement force in the U.S. and formed earlier than the U.S. Navy. It also predates several federal and military forces.

Being an excellent swimmer to join the Coast Guard may be common knowledge, but it’s surprising to learn that half of the people who try out the Coast Guard swimming test fail. Many underestimate the skill required to become a Coast Guard rescue swimmer.

For the Coast Guard rescue team swimming test, an instructor will ask participants to dive into a pool from a 5-foot (1.5-meter) height and swim for 328 feet (100 meters) in about five minutes. These recruits aren’t allowed to use swimming goggles or touch the side or bottom of the pool. Additionally, they’ll need to pass a five-minute treading water test without using a life jacket.

If they fail these tests, they’ll need to supplement their regular training classes with additional swimming lessons. Passing the swimming test is a mandatory requirement for graduating from basic U.S. Coast Guard training. Not surprisingly, it’s an automatic disqualification for recruitment if someone is afraid of swimming, touching, or being near water.

6 The Coast Guard Has Two Flags 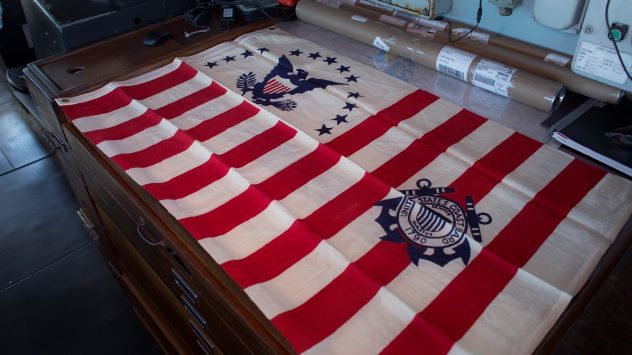 What It Takes To Survive Coast Guard Boot Camp

The U.S. Coast Guard is one of the most difficult military arms to join. It recruits fewer members than other military branches and has strict qualifying requirements. For starters, you have to pass the essential physical fitness and citizenship prerequisites. Next, your academic qualifications have to be above average.

To qualify for the U.S. Coast Guard, you need a college degree or high school diploma and a minimum of 54 points on the Armed Services Vocational Aptitude Battery test. They prioritize recruits who perform better than the minimum aptitude test grade because they compete better with their fellows. They accept G.E.Ds under rare circumstances.

Additionally, participants have to go through thorough security clearance and credit checks. The Coast Guard has the lowest medical and criminal history waivers in the military, which speaks to their strict requirements. Additionally, it’s the only military branch where a shellfish allergy disqualifies you from joining—no exception.

4 The Coast Guard Has a Proud History of Journalism

Alex P. Haley, born in 1921 and the eldest of four children, was the U.S. Coast Guard’s first chief journalist. Haley began his career with the U.S. Coast Guard as a mess attendant at 18. Haley started to learn the art of letter writing while serving on board the M.E.N.D.O.T.A. and M.U.R.Z.I.M. during World War II. During this time, he would send at least forty letters weekly to friends and family and receive just as many.

Soon after, members onboard and sailors started noticing his letter-writing skills. They would pay him to write letters to their lovers. Besides letter writing, Haley also learned story writing and would compile stories about sailors. After World War II, Haley pursued his writing interest and later requested a transfer to a journalist rating. Even though the Coast Guard did not have a journalist rating at the time, it recognized Haley’s skills and made him the first U.S. Coast Guard Journalist.

Until his retirement in 1959, Alex Haley served as a permanent assistant to the Coast Guard Public Relations Officer. In 1977, Alex Haley’s world bestseller Roots received a Pulitzer Prize for Fiction. He was also recognized for his Autobiography of Malcolm X—a compilation of his conversations with him.

During his journalism career, Alex Haley became a senior editor at Reader’s Digest and wrote many popular interviews for them and Playboy magazine, including those of Martin Luther King, Jr., George Lincoln Rockwell, and Miles Davis.

Until the establishment of the Navy Department in 1798, the Coast Guard was the only armed force afloat. The Coast Guard’s history started in 1790 after President George Washington signed an act authorizing the construction of vessels to prevent smuggling and to enforce trade laws and federal tariffs. In the late nineteenth and early twentieth century, these vessels were referred to as a “system of cutters” or “revenue cutters.” Later, they adopted their official name and became the Revenue Cutter Service.

They continued to use this name until 1915, when they were renamed the Coast Guard after Congress merged their service with the U.S. Life-Saving Service. The Life-Saving Service consisted of several stations distributed on the coastline. They were operated by crew members willing to risk their lives to save those working and traveling by sea.

The U.S. Coast Guard’s responsibility remains one of the most critical military functions in protecting and maintaining the nation’s ports, coastline, and marine life.

2 The Coast Guard Is Surprisingly Small

The U.S. Coast Guard is the second smallest military force after the Space Force. Currently, the Coast Guard has about 42,000 full-time service members, approximately 8,000 reservists, 8,000 civilians, and 31,000 auxiliary volunteers. Compared to about 200,000 active service Marine Corps and 550,000 Army Servicemen, the Coast Guard is a smaller military arm.

However, the U.S. Coast Guard is the world’s largest and most powerful coast guard, rivaling the size and capabilities of other countries’ navy forces.

1 The Coast Guard Does More Than Enforce Maritime Laws

Even though maritime law enforcement is the U. S Coast Guard’s primary duty, it’s only one of the several duties that fall under their jurisdiction. Other responsibilities that fall into the Coast Guard’s purview include search and rescue and drug interdiction. Search and rescue means that the Coast Guard is responsible for preventing or minimizing the loss of lives and property at sea. This is one of their oldest missions, as explained by their late nineteenth and early twentieth-century distribution of “rescue” houses along the coastline.

The Coast Guard works closely with federal agencies and other partners to disrupt, dismantle and prevent illegal drug organizations from crossing the U.S. coastline. It conducts its drug interdiction mandate within the transit zone, a coastline of about six million square miles.

Other less-known duties of the U.S. Coast Guard include enforcing international conventions on the repatriation of migrants and dealing with human smuggling. Developing and enforcing laws that maintain the marine ecosystem, prevent illegal ocean dumping, and stop the discharge of hazardous substances at sea and oil spillages are just a few things the Coast Guard deals with daily.