While there have been plenty of novels featuring dogs, many offering warm stories of the unique man-animal connection, there is one genre that has taken a different twist on canine characters. Horror novels have long included man’s best friend, and the furry buddies often become such an integral part of the story that the book would not be nearly as good without them.

Obviously, there are tales where the dog is presented as the bad guy, but more often than not, they are tools used by evil men or sometimes just tragic victims. One of the most infamous dog villains is Cujo, the star of an early book by Stephen King. Cujo is a rabid Saint Bernard that kills its owner and then terrorizes a trapped woman and her child. While Cujo can be considered the villain, in truth, he is simply a poor, sick animal who was treated poorly and got rabies.

However, some of the best horror-fantasy suspense novels do not try to make a villain out of a dog. Instead, the canine characters are strong, noble, and supportive, even if their ends are not always happy ones.

THE STAND – By Stephen King REVIEW

Stephen King does not always make dogs the bad guys. In fact, some of his very best books feature heroic animals who save the day… and sometimes the hero. Kojak in The Stand is one of those dogs. Kojak, whose name was once Big Steve, appears to be the last remaining dog in the virus-ravaged world. He is intensely loyal to his new owner, Glen Batemen, who found him after most of the human population was wiped out.

Kojak follows Glen and other survivors halfway across the country to Boulder, having to battle deprivation and violent wolves along the way. It is Kojak who saves the life of the main character, Stu Redmon. After falling down a washed-out road, Stu breaks his leg and seems destined to die alone in the wilderness. But faithful Kojak returns and keeps the wounded man fed and warm until rescue arrives. In the end, after a female dog is discovered, Kojak’s future looks much brighter.[1]

Kojak would have been proud of the canine companion from King’s latest book, Fairy Tale. Radar, an old German Shepherd, is not magical, all-knowing, or the most remarkable shepherd ever. She is, however, a loyal friend and a loving companion, a dog worth fighting for, and a dog worth saving.

Protagonist Charlie Reade inherits the dog when her elderly owner dies. Charlie had come to care for the old man and loves Radar. Radar’s age and encroaching cancer mean her time is short, and Charlie will do anything to extend it. He will even travel to a strange world populated by people right out of fairy tales, both good and bad, to get Radar to a device that can turn back the years. And once he does, his canine companion proves her worth by helping the teen save the people of this alternate land. Because, as Charlie has always known, Radar is simply a very good dog.[2]

Although Radar the dog enjoys a happily-ever-after in Fairy Tale, the beloved canine character in The Knife of Never Letting Go by Patrick Ness is not as lucky. On a strange new planet settled by humans, protagonist Todd Hewitt lives in a town filled with the audible thoughts of everyone and everything. So when he gets a dog named Manchee, who “speaks” through his thoughts, the boy is not thrilled.

But Manchee is a kind-hearted, loyal canine who will lay down his life for his human if need be. By the time Todd realizes that and understands how much he loves his companion, Manchee is brutally killed by a monstrous villain. Todd is devastated, and so is the reader. Manchee, too, was a very good dog.[3]

Far from being just a side character, Riley, an American bulldog, is the primary point-of-view storyteller in The Book of Riley: A Zombie Tale by Mark Tufo. Over the course of five books, Riley tells the story of a zombie apocalypse from a dog’s perspective. She is loyal to her newly-formed pack of misfits—a yappy Yorkie, a pair of humans, and a dangerous cat—and wants only to reunite all the members of her original family. Unfortunately, in a world filled with the undead, that does not prove easy. But brave Riley will do anything to keep her loved ones safe, even fighting the undead, proving that while a dog really is man’s best friend, canines are not very fond of zombies. [4]

Although his books more often tip toward horror and dystopian fantasy, Robert McCammon truly shook-up genres in his book A Boy’s Life. A blend of a coming-of-age story, suspense, horror, and paranormal mystery, A Boy’s Life tells the tale of Cory Mackenson, a young boy growing up in a depressed Alabama town. Cory’s life is a good one, but his working-class family struggles. Through it all, he relies on his good pal Rebel, who he considers the best dog a boy could have. But on the day Rebel is hit by a car and Cory faces losing him, the dog becomes something more.

Cory’s prayers keep Rebel alive, but he is not the dog he once was. Rebel is changed, half-spirit, half-alive, trapped in an unhappy existence. But it is not until Cory hears a child laughing and sees something remarkable that he finds the strength to let Rebel go. When he beholds the ghost of a dead child playing with Rebel, he realizes the spirit child needs the dog, and the dog needs him. Making the decision to put his beloved companion down devastates him, but knowing that Rebel will be well taken care of by the ghost boy, Cory finds the strength to do it.[5]

Blood’s A Rover: The Complete Adventures of A Boy and His Dog

As good a feeling as books featuring the bond between humans and dogs can be, sometimes that bond can be disturbing. Vic and Blood: The Chronicles of a Boy and His Dog by Harlan Ellison takes that strong relationship and tests it with blood and rage. Harlan’s original post-apocalyptic novella about a boy, Vic, and his telepathic dog, Blood, was later expanded into a series of stories.

In them, boy and animal are linked in a struggle to survive and are able to communicate on a level usually reserved for human beings. Neither of them is particularly nice; they cannot afford it in a world as dangerous and violent as theirs. But their bond is unbreakable. They will literally do anything for each other, which is why when Blood is on the verge of death, Vic has no compunction about killing another person to save him. Blood might not always be a “very good dog,” but he certainly does inspire loyalty.[6] 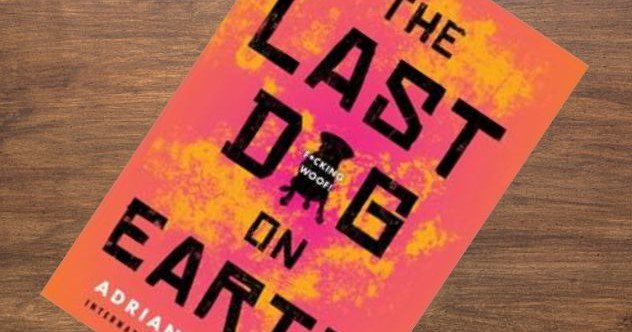 Like the canine in The Book of Riley, Lineker from The Last Dog on Earth gets to tell his story from his own point of view. Unlike Riley, however, Lineker is a hilarious, foul-mouthed pup who keeps the laughs coming in his bleak futuristic world. The dystopian book by Adrian Walker goes back and forth between Lineker and his owner, Reg, an agoraphobic hiding out in a London apartment.

While Lineker does not understand exactly what caused the city to become an abandoned, deadly wasteland, he knows trouble when he smells it, and he will do whatever he can to keep Reg and a small girl they discover safe. Lineker’s inner monologues are hysterical and profane, containing the kind of thoughts you might expect of a dog while also being insightful and blunt. If he were, indeed, the last dog in the world, Lineker would be an excellent canine companion. [7]

While also set in a post-apocalyptic, dystopian world, A Boy and His Dog at the End of the World takes a different tone than The Last Dog on Earth. It is more serious and emotional without the funny first-person antics of a pup like Lineker. Instead, this book focuses on the lengths to which a person will go to recover a stolen dog.

One of only a few thousand humans left on earth, Griz and his family live in seclusion on a small island near Scotland. Not very trusting, they are caught off guard by a charming stranger who steals one of the family’s beloved dogs, Jess. Dogs, like humans, are a rarity in this new world, and female ones are especially unique. Unwilling to lose his beloved pet, Griz and his other dog, Jip, set off after the thief, encountering dangers and challenges along the way. Through human eyes, the reader understands just how precious dogs are to people and why they are worth fighting for.[8]

International bestselling author Dean Koontz has written dozens of books spanning multiple genres. Under his real name and various pseudonyms, he has succeeded in writing everything from romance to screenplays, brutal horror to eloquent non-fiction, and supernatural suspense to quirky thrillers. But one thing most of his readers know about him is that he loves dogs. He so loved his own golden retriever, Trixie, that when she passed, he wrote his first non-fiction book, A Big Little Life. It is, therefore, no wonder Koontz has included dogs in many of his books. Among the many, two stand out.

The character of Odd Thomas, a laid-back young man with the ability to see the dead, is beloved by most Koontz fans. The star of nine books, Odd made readers laugh, cry, and feel. One reason for that is his relationship with a very special ghost: Boo the dog. Readers met Boo in the second book of the series, Brother Odd. Boo is the spectral dog that haunts a monastery where Odd has taken refuge. While like the other spirits who cannot speak, the silent apparition still has all the best characteristics of a dog. Boo is loyal and brave. He stands, or floats, at Odd’s side when confronting dangerous spectral creatures. While Boo is already dead, the dog still feels emotions like fear of the villains and the protectiveness of the weak and vulnerable. So despite being merely a ghost, Boo the dog is the very odd Odd’s most loyal companion.[9]

YOU SHOULD BE READING: Watchers

Of all the dogs Dean Koontz has created in his books, it is probably Einstein in his book Watchers who is the most beloved. Published in 1987, Watchers was a bestseller and was made into a movie that spawned a few sequels. Einstein might look like a normal dog, but he certainly is not.

The product of a lab experiment, Einstein is incredibly smart. His intelligence is at a human level, though he has to use things like Scrabble tiles to communicate. Einstein is being tracked by not only a human villain but also a literal monster created in the same lab. Being rescued by a protective man, Einstein offers his protection right back, and together, dog and man, are ready to take on any and all threats.[10]