There are some authors who shun the limelight, rarely giving interviews or appearing at public events. Then there are other writers who are an open book to the world, like the incredibly prolific Stephen King. Throughout the years, the King of Horror has amassed a loyal fan base, which he addresses as his Constant Readers. But even those not eagerly awaiting his next release know a thing or two about the bestselling author.

There are a lot of oft-repeated facts about King: he’s battled drug and alcohol addiction, his wife Tabitha saved an early draft of Carrie (1974) from the trash, and he hates Stanley Kubrick’s adaptation of The Shining (1980). With those better-known facts out of the way, this list looks to delve a little deeper. Here are 10 things you might not know about Stephen King.

Many of Stephen King’s novels and short stories have been adapted for the screen, with King himself writing some of the screenplays and starring in cameo roles. But he has only once been the man behind the camera—when he served as the director for Maximum Overdrive (1986). The film is adapted from his short story “Trucks” (1973) and is about machines becoming sentient and going on a killing spree. It was poorly reviewed, but King doesn’t just blame that on his inexperience.

“The problem with that film is that I was coked out of my mind all through its production, and I really didn’t know what I was doing,” King reflects. “I learned a lot from the experience, however, and would like to try directing again sometime.” However, he has not given it another go so far, meaning Maximum Overdrive remains his only directing credit.[1]

9 King Was Part of the Band The Rock Bottom Remainders

The Rock Bottom Remainders were an amateur rock band comprised of writers, including Stephen King, Amy Tan, Dave Barry, and Matt Groening, among many others over the years. King provided vocals and played guitar in the now-retired band. Their name comes from the publishing term “remaindered book,” which refers to a leftover book that is sold off cheaply. They were formed by Kathi Kamen Goldmark, who explained that as “a semi-pro musician with a day job in book publicity, I spend a lot of time driving touring authors around San Francisco… I decided to form a band of authors!”

The group had a few encounters with professional musicians, including playing “Gloria” by Them with Bruce Springsteen. They also performed songs with Warren Zevon, including Zevon’s “Werewolves of London” and Aretha Franklin’s “Chain of Fools.” During their rendition of the latter, King recalls that Zevon came over to him and demanded that he “‘play like Keith [Richards]!’ And he gets down in this crouch. So I get down in a crouch, too, and we played like Keith.”[2]

8 He Is the Most Adapted Living Author

How to be Wickedly Prolific | Stephen King

King currently holds the Guinness World Record for the most motion picture adaptations of works by a living author, so if it feels like there’s constantly a Stephen King adaptation out, that’s because there basically is. “Living” is the operative word, of course, as it would be hard to beat the most adapted author ever: Up to February 2016, there were 1,121 adaptations of William Shakespeare’s works.

While no author is catching up with Shakespeare any time soon, King’s website lists 74 film and TV adaptations up til 2022. There are also many more on the horizon, including a new version of Salem’s Lot. His works have also received comic book, stage play, and musical adaptations. In 2013, Dolores Claiborne (1992) was even adapted as an opera.[3]

7 King Has Written the Stories for Two Original Musicals

Speaking of musicals, King has written two in his time. First was Michael Jackson’s 39-minute musical short film Ghosts (1996). King agreed to write the story because, in his own words, “I’m always interested in trying something new, and for me, writing a minimusical would be new.”

He also wrote the story for Ghost Brothers of Darkland County, with John Mellencamp writing the music and lyrics. King commented that “the songs become the character development,” so he focused on the plot. The musical is about two brothers at a haunted cabin, putting it right within King’s wheelhouse. In an interview before it was staged, Mellencamp stated that it wouldn’t “be ‘Jack and Diane’ meets ‘Cujo.’ He’s already written the story—it’s very beautiful, more like ‘The Green Mile.’” The show began life in 2012 at the Alliance Theatre in Atlanta, Georgia, before touring America in 2013 and 2014.[4] 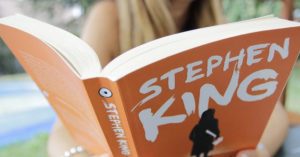 King and his wife own the Zone Radio Corporation, a group of three stations that serve their hometown of Bangor, Maine. There’s WKIT/100.3, which is billed as “Stephen King’s Rock ‘N’ Roll Station” and is the biggest of the three. Also included in his collection is WZON/620, which plays oldies from the ’60s and ’70s, and WZLO/103.1, which plays a mixture of old and new rock.

WKIT gets a mention in King’s novel 11/22/63 (2011), large parts of which take place in Maine, as many of his novels do. The Kings also use their radio stations to raise money for charity. In 2011, they hosted a fundraiser via their stations to raise money to pay the heating bills of Bangor families in need during the winter. The Stephen and Tabitha King Foundation also matched donations, up to $70,000.[5]

5 Carrie Was His First Published Novel, but Not the First One He Wrote

It is often reported that King wrote three novels before putting pen to page—or, rather, fingers to keys—for Carrie (1974). These novels are Rage (1977), The Long Walk (1979), and Blaze (2007), all of which were later released under his Richard Bachman pseudonym. King explains this was done because “back in the early days of my career, there was a feeling in the publishing business that one book a year was all the public would accept.”

However, those are not the only books that predate Carrie. King actually completed his first novel in 1963, when he was just 16. Called The Aftermath, the novel is set after a nuclear war has killed most of the world’s population, and King never plans to publish it.

In 1970, King finished another unpublished novel, Sword in the Darkness, the first chapter of which can now be found in Stephen King: Uncollected, Unpublished (2006). That same year, he began writing The Gunslinger (1982), the first volume in The Dark Tower series. He also wrote The Running Man (1982), another Bachman book, in just a week during the February break from his teaching job in 1972.[6]

4 He Bought the Minivan That Nearly Killed Him

Stephen King talks about the accident that nearly ended his career

In the summer of 1999, King was out for a walk when passing driver Bryan Smith was distracted by his dog, causing him to veer off the road and hit the horror author. King survived but was left with a slew of painful injuries, including a shattered hip and pelvis, multiple broken ribs, and a punctured lung. The accident was widely reported, but something that is less known is the fact that King then bought the 1985 Dodge Caravan that nearly killed him for $1,500.

With a sense of humor about the incident, he joked, “I’m going to take a sledgehammer and beat it!” It was ultimately crushed at a junkyard. In a coincidental twist of fate that seems fitting of a King novel, Smith died on King’s 53rd birthday—September 21, 2000—a little over a year after the accident.[7]

3 King Wrote a Children’s Book Under a Pseudonym

With his killer cars and haunted hotels, King isn’t known for writing child-friendly books, but in 2016, he published a kid’s picture book. Charlie the Choo-Choo by Beryl Evans is from The Dark Tower III: The Waste Lands (1991), but King decided to make the fictional book a reality, with illustrations by Ned Dameron. Readers shouldn’t expect Thomas the Tank Engine, as Charlie’s smile is creepily unnerving, but the story itself is actually child-friendly. The book was first revealed at San Diego Comic-Con, where actress Allison Davies signed copies as the fictional Evans.

The front cover includes a quotation from Stephen King: “If I were ever to write a children’s book, it would be just like this!” King himself is actually a character within the world of The Dark Tower, so this blurb isn’t out of place.

Charlie the Choo-Choo isn’t King’s first foray into children’s publishing either. In 2004, he brought out a pop-up book version of The Girl Who Loved Tom Gordon (1999). It was designed by Kees Moerbeek and illustrated by Alan Dingman. While not as gory as the original novel, parents should probably check if it’s suitable for their kids’ scare tolerance.[8]

2 There Are a Few Books He’ll (Probably) Never Publish

Along with The Aftermath and Sword in the Darkness, there are also some unfinished stories that have never been published. For instance, in 1974, he spent six weeks working on a fictionalized account of Patty Hearst’s kidnapping called The House on Value Street, but he couldn’t get it to work and never revisited it. Information about an unfinished novella he wrote in 1987 called Phil and Sundance surfaced on the internet in 2013, but it also remains incomplete and unpublished.

Many of King’s unpublished manuscripts are held at the archive in King’s home in Bangor, which was previously housed at the University of Maine’s Raymond H. Fogler Library. However, the archive is only open to researchers and scholars, who must have King’s permission, so most of his Constant Readers will never get their hands on those pages.[9]

On Stephen King’s website, there is a page dedicated to what he calls his “dollar babies”—these are short stories that he will allow rookie filmmakers to adapt for just $1. He explains that he started this program in 1977, despite “the objections of my accountant, who saw all sorts of possible legal problems,” and it still stands to this day. There are a couple of rules: the films can’t be shown commercially without prior approval, and a copy must be sent to King.

Only a few of the dollar baby films have ever been given commercial distribution rights, the most notable one being Frank Darabont’s adaptation of “The Woman in the Room” (1983) from King’s collection Night Shift (1978). It was the first film that Darabont directed, and it proved good enough to not only make the Academy Award semi-finalist list but also to convince King to let Darabont adapt more of his stories. He went on to make The Shawshank Redemption (1994), The Green Mile (1999), and The Mist (2007), all of which are critically acclaimed and regularly ranked among the best Stephen King adaptations.[10]