With an estimated 22.2 million domestic and global flights in 2021 and an average of two million people flying the friendly skies each day, it’s only natural that strict guidelines have been put in place by the TSA. They govern what can be brought on board and placed in checked bags to ensure everyone’s safety during the flight.

Aside from passenger and crew safety, there are also agricultural guidelines in place to prevent any animal, pest, or food products from being brought into a country that could carry disease or harm the ecosystems.

Unfortunately, in any environment with rules or guidelines, there will naturally be a handful of rule-breakers who believe that they will either not get caught or that their plan to sneak a prohibited item past officials is completely fool-proof.

This list contains the stories of 10 bizarre things that airline passengers have tried to hide in their luggage, assuming they would not be caught. 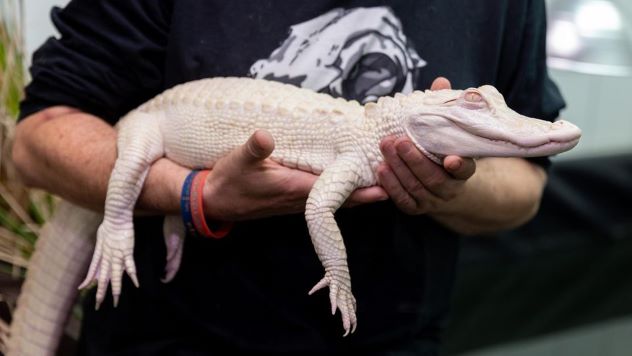 Albino alligators are very rare, with fewer than 200 living in the world. Additionally, their lack of pigmentation puts them at a severe disadvantage in the wild, given that they have no way to camouflage themselves, can quickly die from overexposure to the sun, and have poor eyesight.

Sadly, their rarity also makes them a target for animal smugglers, as they can be sold for anywhere between $20,000 and $2 million.

On September 25, 2022, a 42-year-old American man traveling from Germany to Singapore decided to bring one of these rare animals along on his travels. Naturally, customs officers were quite surprised when a 3-foot (1-meter) albino alligator was detected in his suitcase during a security checkpoint.

With the exception of its nostrils, the alligator was completely wrapped in cling wrap and duct tape. Luckily, the alligator was alive despite being in poor health. Customs officers, along with a veterinarian, worked to free the alligator, and it was then taken to a reptile sanctuary.

The man’s cell phone was confiscated, and he was also assessed a fine. Legal and criminal proceedings into the matter are still ongoing.[1]

Mom Accused of Trying to Smuggle Baby in Carry-On

Forty-two-year-old Jennifer Talbot was scheduled to board a flight from Manila, Philippines, to Columbus, Ohio, on September 4, 2019. However, little did anyone know she had carefully concealed a precious piece of cargo—a six-day-old baby boy.

Talbot had placed the infant in an oversized carry-on bag and managed to get through immigration but was eventually stopped by officials before boarding the plane. That’s when the baby was discovered.

Talbot originally claimed the baby was her nephew, although she had no documentation to prove her claim. Talbot later gave officials an affidavit, supposedly from the infant’s mother, that gave her consent to travel with the newborn. However, the affidavit had not been signed by the baby’s mother.

Talbot was arrested, and the baby was placed in the Social Welfare Department’s custody. Talbot was charged with human trafficking and kidnapping.[2] 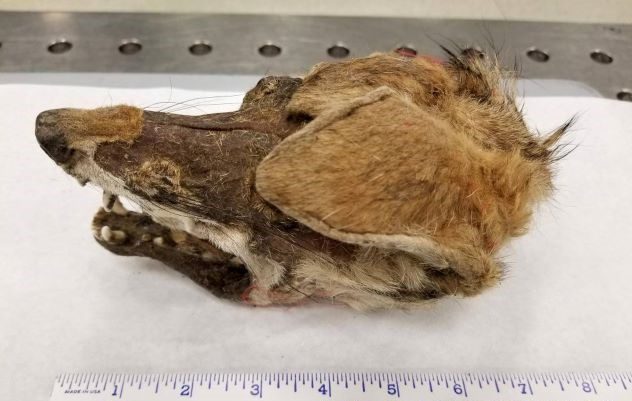 On September 12, 2019, a mother and daughter traveling from Senegal decided to bring a rather unusual “gift” with them on their trip to the United States.

When they arrived at Philadelphia International Airport, they were stopped after U.S. Customs and Border Protection discovered an 8-inch (20-centimeter) African fox skull in their baggage, completely intact with hair and teeth.

The travelers stated that the skull was meant to be a gift for their cousin, who planned to use it to “ward off evil spirits.” However, the women ultimately decided to leave their “gift” with customs officials.[3]

On July 29, 2019, an active military service member was returning home to the United States from Kuwait. However, he decided to bring something back with him that gave TSA officials quite the scare—a missile launcher.

The military weapon was discovered by TSA officials at the Baltimore/Washington International Thurgood Marshall Airport. The passenger was detained for questioning and simply stated that he brought the missile launcher along with him to take back home as a souvenir.

Thankfully, the launcher was not live and was able to be safely disposed of by the state fire marshal.[4]

Leopards in both Asia and Africa have been listed as endangered due to habitat loss, illegal wildlife trading, trophy hunting, and the ceremonial use of their skins. While smuggling these animals is illegal, one man was persistent in his efforts and tried to conceal a one-month-old leopard cub in his luggage on a flight from Bangkok, Thailand, to Chennai, India.

However, the 45-year-old passenger’s plans were quickly foiled when his tiny traveling companion began crying out as he arrived in Chennai on February 2, 2019. When officials became suspicious, the man tried to rush out of the terminal and avoid questioning. When his luggage was opened, officials discovered the 2.2-pound (1-kilogram) leopard cub concealed in a plastic grocery basket inside.

The tiny cub was naturally in shock but was bottle-fed and assessed by a veterinarian before being transferred to the Arignar Anna Zoological Park in Chennai.

The case was forwarded to the state’s wildlife crime bureau to determine if the passenger may have been part of a larger smuggling ring.[5]

What!?!? Gun found in chicken

TSA guidelines state that unloaded firearms may be put in checked baggage as long as they are placed in a locked container and declared at the ticket counter. TSA also allows food items such as meat and vegetables to be transported in either carry-on or checked bags as long as the items are packed with ice or frozen ice packs.

However, one daring passenger who was traveling to Haiti decided to ignore both rules and tried to camouflage a gun in a bizarre way—stuffing it into a raw chicken. Fortunately, his “stuffed bird” was detected by TSA agents at the Fort Lauderdale-Hollywood Florida International Airport on September 27, 2022.

No specific details were given regarding the passenger or charges, but Homeland Security stated this incident was an “ongoing criminal case which has been accepted for prosecution.”[6] 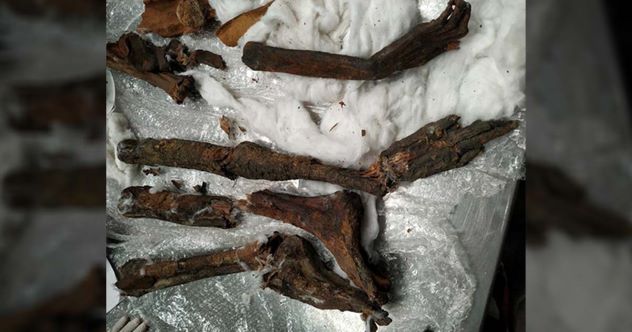 On February 24, 2019, a passenger visiting from Belgium attempted to conceal parts of two Egyptian mummies inside a speaker packed within their luggage. However, this cunning plan was derailed when an X-ray monitor detected images of mummified body parts—two feet, two legs, the lower part of a left hand, an arm, and part of a torso.

The remains were intercepted by customs authorities at the Cairo International Airport and then examined by an archaeological committee that confirmed they were authentic. The confiscated body parts were then sent to an Egyptian museum so they could be restored.[7] 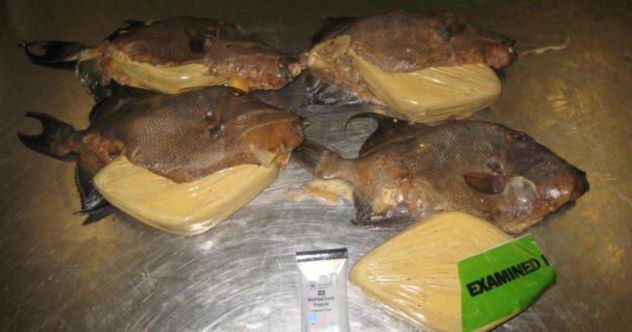 While illegal drugs are never permitted on an airline (or anywhere else, for that matter), one 38-year-old female passenger believed she could outsmart authorities with the perfect plan to smuggle cocaine inside her luggage by placing it inside fried blowfish.

The female passenger was traveling from Jamaica to Miami, Florida. However, when she arrived at Miami International Airport on June 13, 2015, an x-ray of her luggage revealed something even more strange than traveling with fried fish.

U.S. Customs and Border Protection officers noticed that some of the fish were bulkier than others, and some had stitch marks on their stomachs, indicating they had been sewn together. They then discovered 2.3 pounds (1 kilogram) of cocaine inside the fish.

The cocaine was seized, and the woman was arrested.[8] 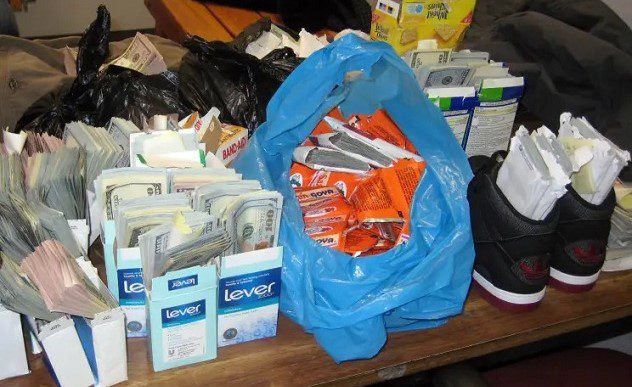 Forty-eight-year-old Abdulkarim Altareb was flying from New York to Qatar on March 1, 2015. However, when customs officers asked Altareb to declare the amount of cash he was carrying, he lied, stating he had $6,500.

An additional examination of his luggage was done, and more than $770,000 was discovered. Altareb had concealed $50 and $100 bills in boxes of Alka-Seltzer, Thera-Flu, Dove soap, Band-Aids, and Splenda.

When Altareb was later questioned about the money by Homeland Security, he claimed that it belonged to his family and that they intended to build in Yemen.

Altareb was charged with “bulk cash smuggling.” It was later determined that Altareb ran an unlicensed money transfer business and had committed other types of fraud on food stamp applications, tax returns, and citizenship applications. On May 10, 2017, Altareb was sentenced to four years and three months in prison.[9] 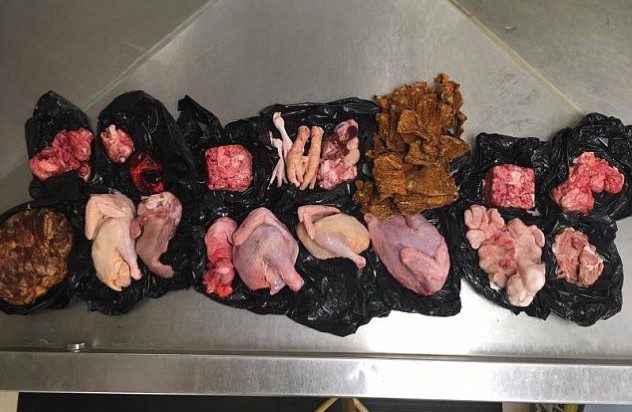 On February 4, 2017, U.S. Customs and Border Protection made quite an unusual discovery during a baggage exam at Dallas Fort Worth Airport.

While a woman traveling from Vietnam provided a negative customs declaration, she was, in fact, hiding something-—22 pounds (10 kilograms)of illegal animal meat and body parts. The meat was discovered after being asked to take her luggage for a baggage exam.

The woman was not charged, and all the meat was destroyed.[10]