Earlier this year an article made the rounds that listed the most visited locations in the world. The Blue Lagoon in Iceland opened the list at number nine and the number one spot was taken by the Niagara Falls that is located in the US and Canada. The falls are estimated to host at least 30 million tourists every year (barring 2020 of course).

However, sometimes you might just not be in the mood for crowds or sights that have been splashed all over magazine double page spreads several times. Instead, you might just be in the mood to travel to a place where thousands of people don’t gather at one time. A place most people might never even have heard of.

If you want to travel to a destination with a difference for your next vacation break, why not consider one of the hidden gems on this list? The below photographs may just convince you. 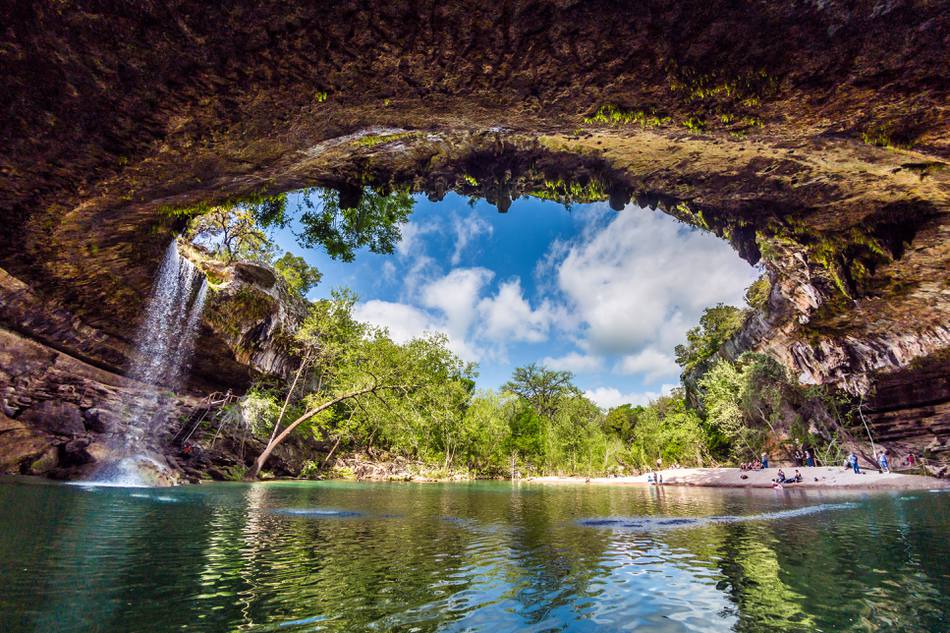 Referred to as a Texas cenote, Hamilton Pool Preserve is an emerald green natural swimming hole that was created when an underground river collapsed thousands of years ago. A waterfall flows into the pool and it is surrounded by massive slabs of limestone. The pool is part of the Balcones Canyonlands Preserve and has been a protected nature preserve since 1990. While it has been a popular swimming hole for Texas residents and visitors for quite a long time, it remains a hidden gem location in the US, as most tourists seem to prefer the larger and busier destinations.[1] 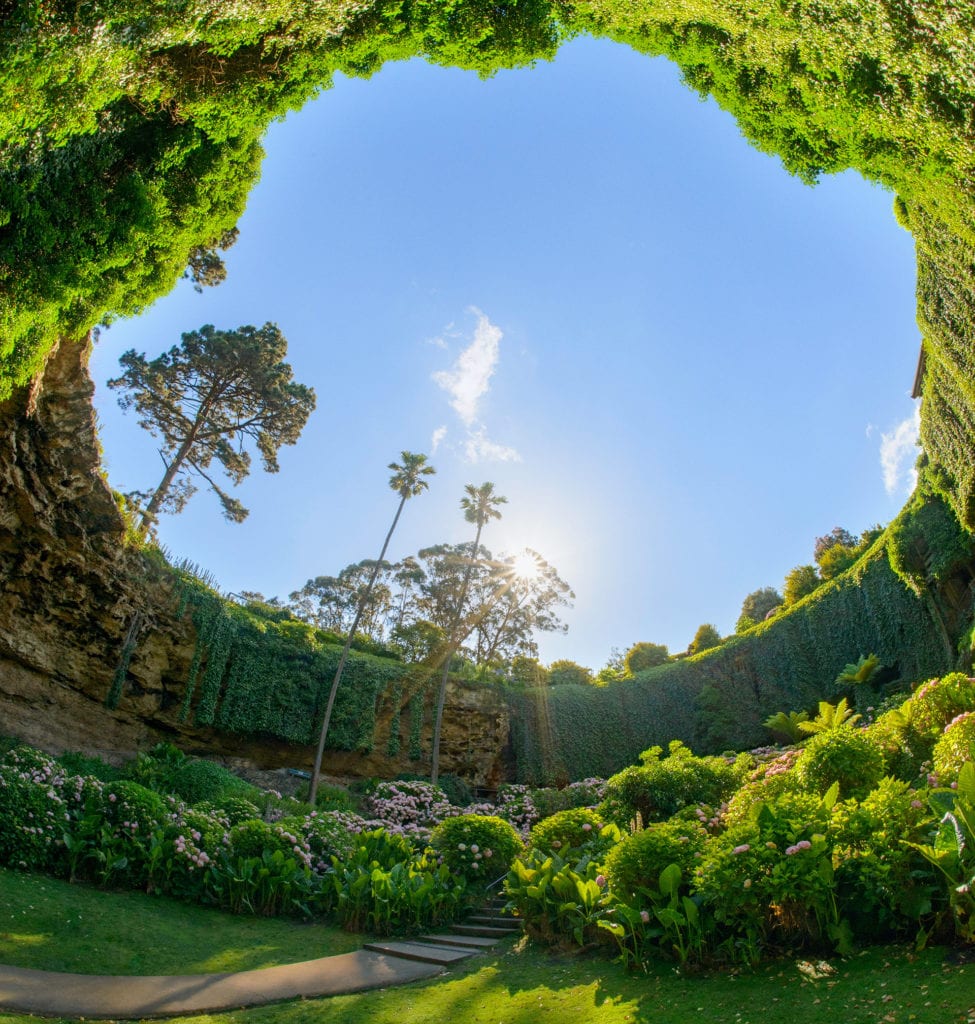 Around 40 million years ago the southeast corner of South Australia was submerged under water. Limestone layers were formed on the seabed and it eventually ‘erupted’ from the sea. Over the millennia that passed, water erosion led to the formation of subterranean caves in the now exposed limestone which opened up when their ceilings collapsed. These sinkholes numbered more than 50 in the region.

In 1886, a farmer by the name of James Umpherston bought a piece of land that included one of the sinkholes. He decided to ‘green it up’ by planting it out and called the hole “The Caves.” These days the sinkhole is known as the Umpherston Sinkhole or The Sunken Garden and is a lush green space with a round view to the blue sky above. Those who have visited the garden call it ‘a magical place’ and ‘like something out of a fairy tale.’[2]

The Alberto de Agostini National Park in the third largest national park in the whole of Chile. It is only accessible by boat and one of the most remote and unspoiled parts of Patagonia. The park also marks the end of the Andes Mountains as they dip into the ocean surrounding it. Here you will find massive glaciers, the subpolar Magellanic forest, elephant seal colonies, Chilean dolphins and even Andean condors.[3] 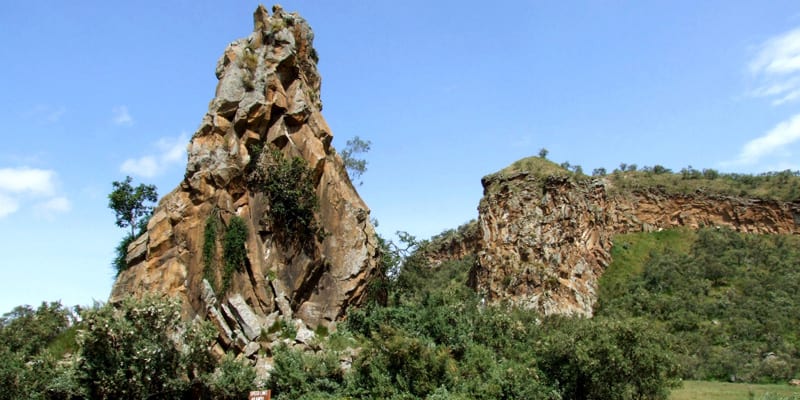 Don’t let the name put you off: Hell’s Gate National Park is a fantastic holiday destination that includes a spectacular landmark called Fischer’s Tower. The tower is a volcanic plug named after the German explorer Gustav Fischer. Local folklore has it that the tower is in fact a young Masai girl who was instantly turned to stone after turning around to look at the home she was leaving behind, while on her way to the man she was to marry.

Other than the tower, the park is also home to Hell’s Gate Gorge, lions, cheetahs, leopards, vultures, zebra, antelope and more. Fitting, given that the setting for the 1994 film, The Lion King, was based on the look of the park.[4] 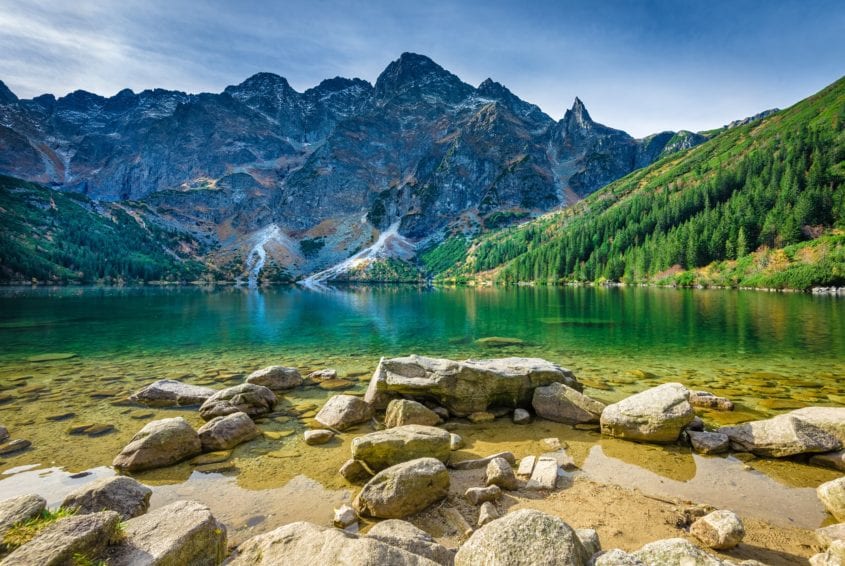 Poland is a popular tourist destination amongst history and art lovers because of its medieval architecture and WWII history. Those who travel to this beautiful country can visit the Auschwitz-Birkenau Camps in Oswiecim, the Warsaw Old Market Place, and the stunning Crooked Forest in Gryfino.

If you are looking for something a little more off-the-beaten-track however, Poland is also the location where you will find Morskie Oko or “Eye of the Sea.” Morskie Oko is a lake deep within the Tatra National Park which changes color throughout the year, transforming from a deep blue shade to a light, turquoise color. Surrounding the lake are mountains and Swiss pines, which makes for a picture-perfect holiday setting.[5] 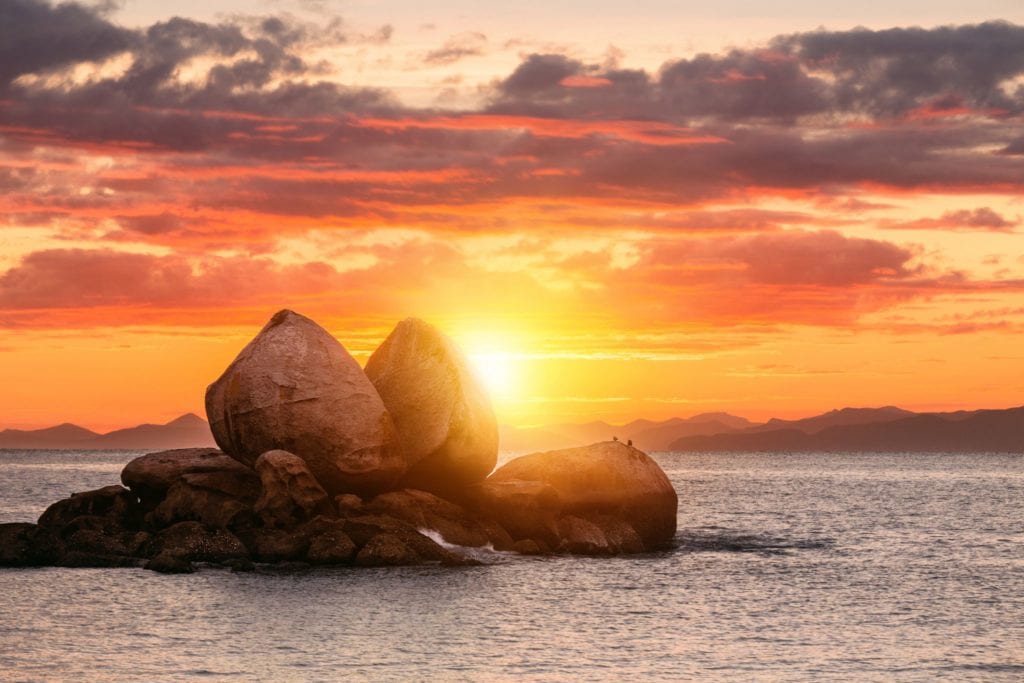 If you’re looking for both quirky and stunning holiday destinations, New Zealand has it all and more. Here you will find the mysterious Moeraki boulders, Teapotland, Stonehenge Aotearoa and the Waitomo Glowworm Caves.

In Tasman Bay, off the northern coast of the South Island of New Zealand, you will find Tokangawh? or Split Apple Rock. Legend has it that millions of years ago, the gods were fighting over a golden apple. In the struggle to grab hold of the fruit, it slipped from their hands, fell from heaven to earth and split open when it landed. It then turned to stone. Another legend has that the gods were fighting over a boulder and their tugging from either end, caused the rock to split.

The rock, which truly does resemble a split apple, in fact split because water that seeped through its cracks froze and then expanded. It squats around 50m into the ocean off the coast of the Tasman sea and is accessible by wading into the water during low tide.[6] 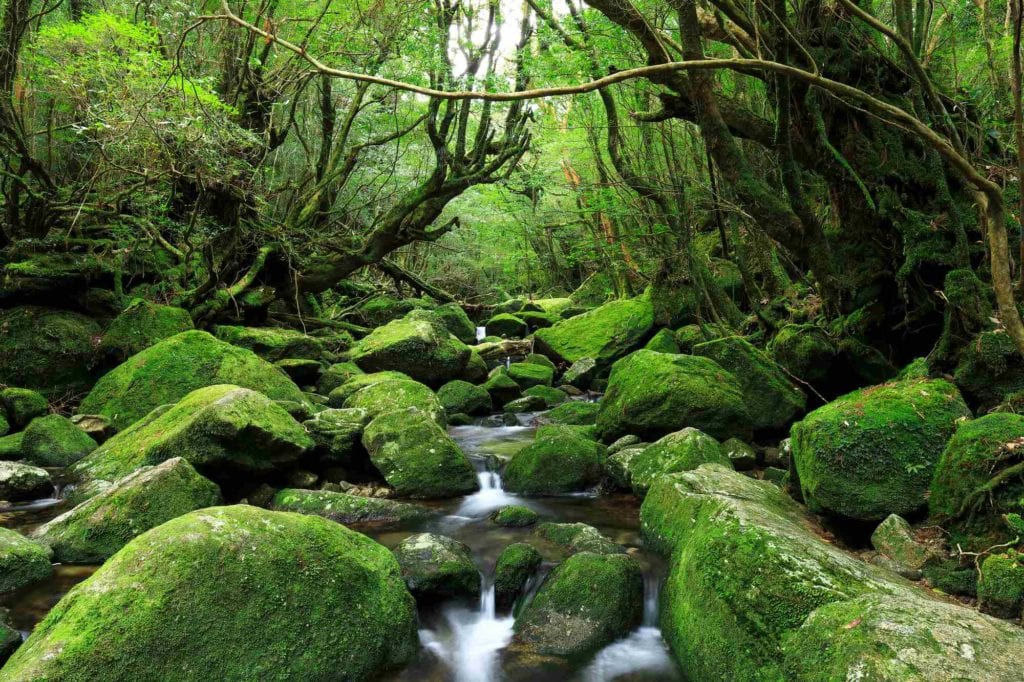 Yakushima is a subtropical island that forms part of the Kagoshima Prefecture. Here you will find some of Japan’s oldest living trees inside a massive cedar forest, some of which are older than 7000 years. Some of the areas on the island have been declared National World Heritage Sites in 1993. The Shiratani Unsui-kyo Ravine is a big draw for the adventurous as it is a beautiful place to hike. Some of the trails can be completed in a single hour while other trails inside the ravine can take up to six hours to complete. It rains almost every day, but that doesn’t take away from the exceptional beauty of the island where you will also find rare plants and animals, including the Yaku monkey.[7] 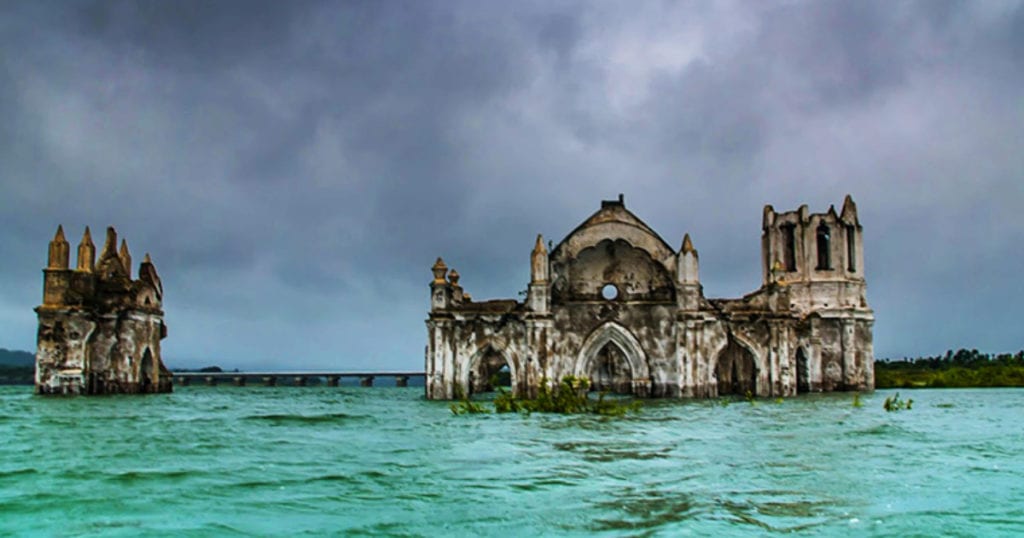 Ruins are always intriguing no matter where you find yourself in the world. In the village of Shettihalli in the Hassan district of Karnataka in India, lie the ruins of the Gothic-style Rosary Church that was built during the 1860s. Each year during the monsoons, between July and October, the church is half-submerged making it look like the structure is floating. The area in which the church stands is very remote so you will have to bring your own food if you want to have a picnic nearby.[8] 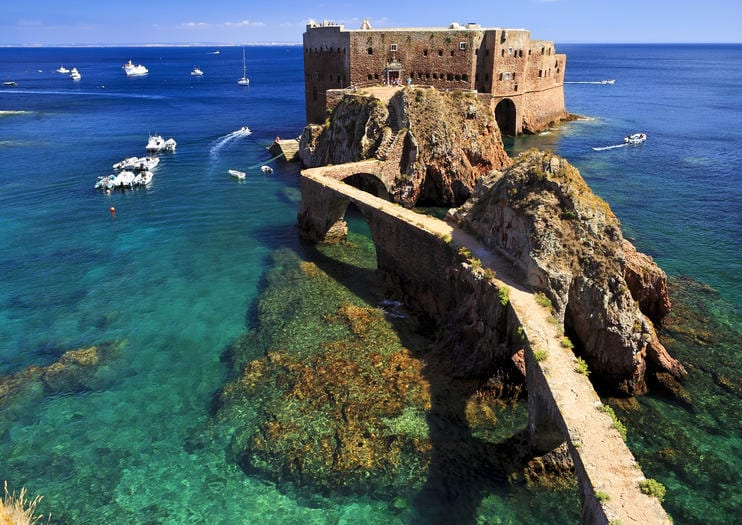 The Berlengas archipelago is made up of Berlenga Grande, which is the largest island, and two groups of smaller islets; the Estelas Inlets and the Farilhões-Forcados Islets. Only a small number of tourists are allowed here as it has been declared a reservation area for the protection of local fauna.

On Berlenga Grande stands the imposing Fort of the Berlengas, also known as Fort St. John the Baptist. The fort was constructed out of what remained of an old, abandoned monastery and built in the 17th century. In the 1950s it was used as a Pousada (government-owned hotel) and was eventually deserted after the 1974 revolution. Today it makes for an awesome tourist attraction and stunning snapshots.[9] 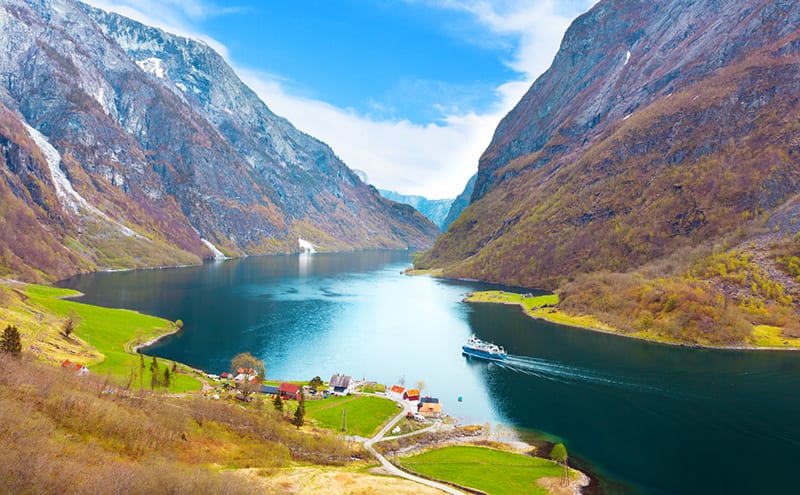 Speaking of stunning photographs, if you’re looking for the ultimate ‘Instagramable’ holiday destination, you will not be disappointed with the Naeroyfjord in Norway. The fjord is surrounded by colossal mountains on either side, as well as waterfalls and snowfields. The Naeroyfjord is around twenty kilometres in length and its shallowest point is 12 meters deep. It is an extension of the Sognefjord and is one of the narrowest fjords in Europe: 250 meters wide at its narrowest point.

There is a passenger boat for visitors all year round, as well as charter boats and cruiseships during certain times of the year. The fjord is a Unesco World Heritage site and has unsurprisingly been used as the inspiration for the fictional town of Arendelle in the hugely popular animated film: Frozen.[10]

10 Incredibly Dangerous Competitions From Around the World