There are some strange creatures on Earth, and the tiny pumpkin toadlets (also known as the Brachycephalus species of frogs) who live in Brazil are very strange indeed. So far, scientists have described approximately 36 species within the genus; however, there is some debate about that number. Some scientists disagree about the distinction between certain toadlets as they look similar and have only slight genetic differences.

It might be easy to overlook these tiny frogs, but they have some very memorable characteristics. From their size to their coloration, these amphibians are a bit cute, but once you look closer, you might surmise they are bad at being frogs. 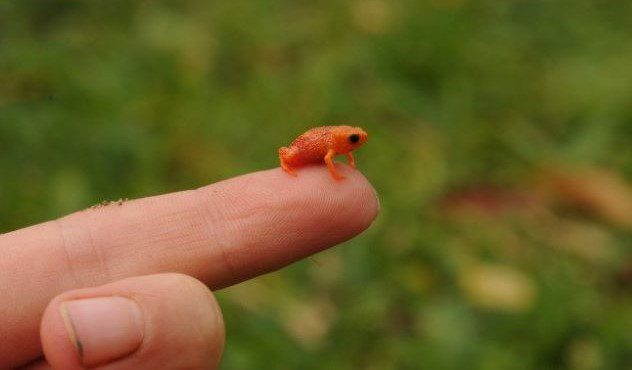 Pumpkin toadlets are tiny. Teensy tiny. Adult toadlets grow to be roughly the size of a Skittle. Some species range between 0.4 inches to 0.6 inches (10.8mm to 14mm), while others are giants, growing up to 0.77 inches (19.7mm) in length.

Their eggs are even tinier being roughly 3/16-inch (5mm) in size. That’s smaller than a grain of rice!

This small size has some pros and a few cons. The biggest pro is that it makes them an unlikely target for predators. They hide under leaf litter and logs in the Atlantic Forest, although a single Skittle-sized frog is hardly even a snack for most animals.[1] 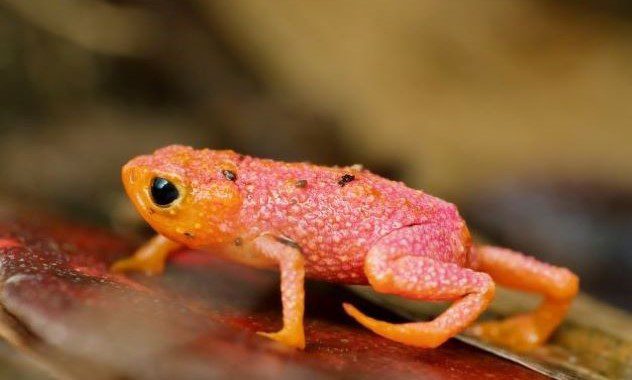 A pumpkin toadlet’s coloration is all in its name. These tiny frogs are bright yellow/orange. As if a Cheeto had been dropped in the leaf litter. Some of the species are redder and have black spots or mottled bumps.

It may seem dangerous for such a tiny creature to be so boldly colored; however, they aren’t the only orange on the forest floor. This color may give them some camouflage in an environment with small yellow/orange leaves, orangish mushrooms, and bright seeds. These pops of color are especially abundant during the rainy season, which is when the pumpkin toadlet is most active.[2]

What If a Whale Swallowed a Poisonous Pufferfish? – – Tetrodotoxin explained

This beautiful color is also a warning. The pumpkin toadlets’ skin and organs contain a powerful neurotoxin with no antidote—tetrodotoxin. This is the same toxin that is found in some pufferfish, crabs, and octopuses. This toxin prevents the nervous system from carrying messages which, among other unsavory and life-threatening symptoms, can cause complete paralysis. If the tetrodotoxin doesn’t kill you, there’s a cocktail of eleven other paralytic toxins.

Some species of the pumpkin toadlet are too toxic to touch with bare hands, while others are safe to handle as long as you don’t touch your eyes or mouth after. This depends on how much toxin is on the skin and which of the toxins they secrete.[3]

A pumpkin toadlet’s color is not the only cool thing about its appearance. Their bones glow! Scientists found that under UV light, the toadlet’s skeleton fluoresces blue and shines through the skin of its head and back. As if the frog was wearing a little skeletal helmet and back plate.

It is unclear whether the toadlets can actually see these glowing bones themselves or if it is just an extra warning about how toxic they are. If the little frogs can see these bones, it would be a helpful way to find mates when it’s time to breed.[4]

These Frogs are the Worst Jumpers Ever

There was some mention of downsides to being so tiny. If you’ve ever seen a pumpkin toadlet jump, you may understand why.

These frogs are so small that it has affected their ability to jump, or more accurately their ability to land. Pumpkin toadlets launch themselves into the air, like any other jumping frog might, but as soon as they are airborne, they freeze up and flop back down to earth. It is one of the least elegant jumps to be witnessed in the natural world.

The pumpkin toadlets are unable to judge where they are in space as soon as they leave the ground, so their entire body goes rigid until they crash into Earth. This is due to their ears being too small to properly develop certain features, so they lack balance. Without those important inner ear structures, they rely on feeling the ground under them to know they aren’t hurtling through space. The jump is still effective in launching the frogs away from whatever danger they have encountered, but the landings are violent affairs of cartwheels and somersaults.[5]

Balance isn’t the only problem these tiny frogs have with their ears. Pumpkin toadlets emit a series of quiet, high-pitched buzzing calls. However, that’s hardly going to get them a date. No matter how much the toadlets call, they are deaf.

When they were initially discovered, scientists observed these tiny orange M&M-sized frogs standing in the leaf litter of the forest calling out. It was assumed that this call was a territorial warning among males or a lustful serenade for nearby females. However, after closely examining ear structures, it has been discovered that pumpkin toadlets are deaf. These tiny frogs can’t even hear their own mating calls. It is likely that the calls of pumpkin toadlets are a remnant from an earlier form in their evolution.

Their call might still be important on the dating scene, but not for the typical reasons. When the pumpkin toadlet voices its call, they stand tall and inflate their throats, creating a visual display that could attract potential mates or warn intruders to back away. When creating their visual display, pumpkin toadlets also wave their front legs around as if cleaning their face. There’s hope for love yet, even for a frog that can’t hear its own mating call.[6] 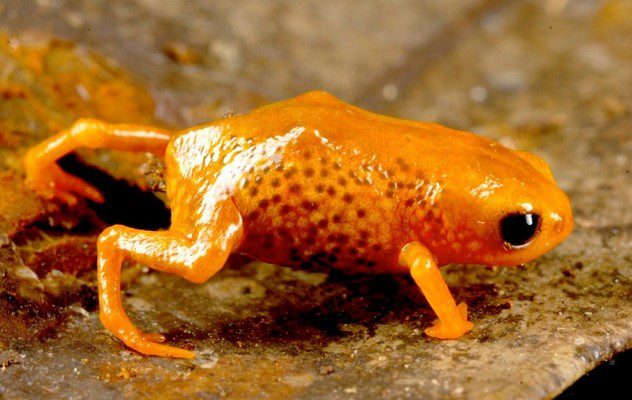 The pumpkin toadlet’s mini size also cost them some fingers and toes. On their front appendages, the toadlets have four digits, but only three are functional. The story is similar for their hind limbs, which have five digits but only three or four functional ones.

Their miniaturization has significantly shrunk the frog’s digits, with the non-functioning ones often not even making visible bumps on their hands or feet. Beyond this strange anatomy, they also lack webbing between their digits, unlike the storybook frogs that typically come to mind. The lack of webbing is not an issue for these frogs who live in leaf litter away from ponds, lakes, or any other big body of water.

Between their terrible jumping and useless digits, it makes the pumpkin toadlet’s tiny march through the forest a very slow process. However, even with their defunct digits, they appear to prefer walking to jumping.[7] 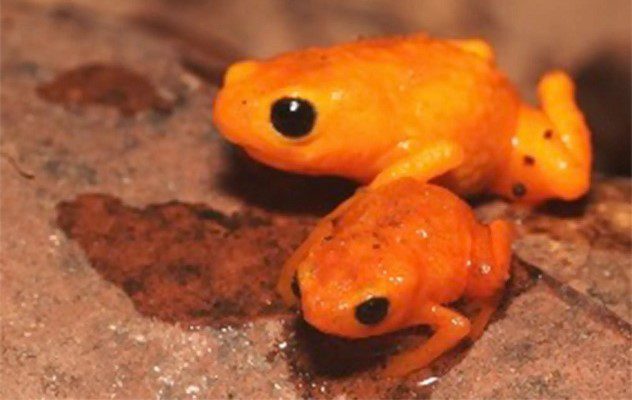 Pumpkin toadlet lovemaking is a bit strange within their amphibian order. The pumpkin toadlets do it differently because they switch it up during the action. During the breeding season (Brazil’s wet season), a male will first mount a female in an inguinal position, meaning he holds her around the waist from behind. However, the male doesn’t stay in that pose. He will then move to an axillary position where he holds her above her arms, almost underneath the armpits.

These actions are likely to increase fertilization. There are three orders of amphibians, and pumpkin toadlets belong to the order Anura, which has over 4,500 members. It is highly uncommon for anurans to change position during breeding, making pumpkin toadlets strange even for an amphibian.[8]

Thirty minutes after the lovemaking is complete, the female is ready to lay her eggs. However, she is not headed for any body of water. Pumpkin toadlets lay their eggs on land. The male wanders off to find his next mate while the female lays her eggs under a log or leaf litter in the damp forest soil. The breeding season is during Brazil’s wet season, which keeps the eggs from drying out or risking baking in the hot sun.

The female camouflages the eggs by using her hind legs to roll them in the dirt. Soil becomes stuck to the eggs as they are rolled around, making them tiny clumps indistinguishable from the rest of the earth. There’s no time for teary goodbyes because as soon as the female is finished stashing the eggs, she abandons them.[9]

This Frog Is Bad At Basically Everything

Pumpkin toadlet eggs take 64 days to hatch. What emerges from those eggs aren’t writhing, slimy tadpoles. Instead, pumpkin toadlets skip the tadpole phase altogether and emerge as mini versions of an adult.

They normally hatch in clusters of five and are independent from the moment they bust free. Some frogs release chemicals to escape the egg, but the pumpkin toadlet has an egg tooth that it uses to break out. Although they skip the tadpole phase, pumpkin toadlets keep a small tail for a short time after hatching.

At the end of the day, these cute tiny frogs look cartoon perfect; however, it is as if an alien made a rough approximation of a frog. They can’t jump or swim, are deaf to their own mating call, and bypass most of the typical frog life cycle taught in schools. Pumpkin toadlets are freestyling what it means to be a frog.[10]