It’s hard to think of a more iconic animal than the kangaroo. They’re cute and bounce around like they’re on a pogo stick all day, and their pouch is the most adorable thing ever.

So you can imagine our disappointment when we learned that these little guys are actually mischievous. Sure, they might be cute and cuddly, but they’re also quite the troublemakers. We know it sounds crazy, but there’s so much more to these little guys than their athletic prowess and jumping abilities. They have a lot of personality and the kind of silly antics that make for great comedy.

If you’ve ever seen one in person or on TV, you know exactly what I’m talking about. Here are ten hilarious kangaroo hijinks that will brighten up your day and make you laugh out loud.

Related: 10 Australian Animals That Aren’t As Deadly As You Think

Welcome to the jungle, baby!

When two kangaroos are in the mood for an excellent ol’ fashioned boxing match, you’d better get out of the way. It’s not for wimps—and it’s definitely not for spectators.

In this video, these two kangaroos punched each other until one of them fell. That’s how kangaroo boxing works: You hit until you can’t stand anymore, and then you fall.

Some people might think this is animal abuse, but it’s just a fun way to bond with your best friend (that would be these two kangaroos). Plus, it gives us all an excuse to watch some hilariously epic fights between kangaroos that are often too funny to take seriously!

9 A Kangaroo Boxer vs. Human Boxer

It’s not every day you see a boxing trainer go head-to-head with a kangaroo.

Former boxing trainer Cliff Des fought a kangaroo when he saw the animal trying to get close to his dogs. According to him, he still came second best. The former boxer had been training his dogs when they suddenly started barking at something outside his fence. When he went to check it out, he found a kangaroo standing on the other side of the fence.

A video of the incident shows him sprinting away from the animal—as his two small dogs watch on, yapping behind the barrier. He slips and is then stomped upon by the kangaroo.

According to Des, this wasn’t the first time he’s had a run-in with a kangaroo—but it was undoubtedly the most entertaining! The boxer suggested that the animal was flirtatious and might have mistaken him for a female kangaroo.[2]

8 Zookeeper Punches Kangaroo in the Face

Animals are essential to our lives, and we want to protect them. But sometimes, they can be a bit too wild.

In Australia, a zookeeper is under criticism for punching a kangaroo to save his dog from being attacked. The incident was caught on camera and has since gone viral across social media platforms, but it also sparked debates about animal rights and abuse.

The man who shot the video said that the zookeeper only sprung into action to protect his dog. Most people would’ve done the same thing, and a “little smack in the face” will not injure the kangaroo in question.

Kangaroos wearing boxing gloves are amusing, but it’s a different story when they send the ringmaster flying![3]

7 Can a Kangaroo and a Parrot Be Best Friends?

Do you know what’s funnier than a kangaroo? A kangaroo that gets let out of his enclosure by a parrot.

The owners of a kangaroo found walking around a Louisiana town said that a cheeky parrot accidentally let the animal out of his pen. The local authorities said Baxter the kangaroo was securely captured and brought back to its home on Thursday morning after being spotted on camera wandering around the town of Zachary in July 2022.

Baxter’s owners operate Bird Recovery International, a non-profit organization specializing in reintroducing exotic wild birds to their original environment. They said that more than a dozen parrots live with Baxter and that one of the birds, dubbed Thor, just discovered how to unlock the lock on the kangaroo’s enclosure.

According to Louisiana law, kangaroos are exotic and cannot be kept as pets. It isn’t known if Baxter’s owners, who formerly owned a zoo, have an exception for the animal because their charitable organization is focused on animals.[4]

Kangaroo Trying To Get into Russian Embassy in Australia

In a funny video that has gone viral, a kangaroo attacked the Russian consulate in Australia. After the marsupial was discovered trying to enter a building in Canberra, it appears that Ukrainian President Volodymyr Zelensky has another ally in his ongoing war with Russia.

The kangaroo is captured on camera leaping up to the gates and pausing to examine what is in front of it. The animal can repeatedly be seen kicking at the gates before stopping for a bit of rest.

After struggling to fit through the gaps on the first attempt, the bulky and ripped animal tries again, only to give up and hop off at least somewhat comically. (But it still looks pretty tough!) Kangaroos are hilarious—and political, it seems.[5]

Chris “Brolga” Burns has been working with kangaroos for more than 15 years since he saved his first joey. He has since founded a kangaroo sanctuary in Alice Springs in the Northern Territory. With rescued kangaroos all around him, you’d think he knows how to handle the jumpy beasts. I mean, his nickname is Kangaroo Dundee.

Well, that’s true for almost all his rescues. Except Roger. Brolga raised Roger from a baby, essentially becoming the joey’s mama. So now, Roger is not afraid of humans. And this causes a problem as Roger is now the alpha male of the group and weighs a whopping 200 pounds (90 kilograms).

Brolga recently had to have knee surgery after escaping from the aggressive alpha and falling. However, that still doesn’t stop Roger from making sure he protects all his females when Brolga comes near—competition is competition, after all.[6] 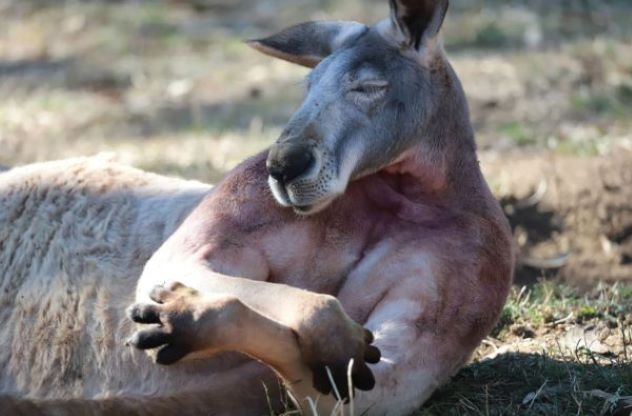 Everyone loves a good viral story. But what if your viral story was about a handsome kangaroo found in Adelaide, South Australia?

The internet went wild for this handsome fella when he was caught on camera relaxing under the sun. Deborah Schutz took the photo and said it was one of the most liked images on her account.

While the kangaroo looks peaceful, remember: if a kangaroo feels threatened, it can become aggressive. Schutz says that kangaroos will do whatever they can to protect themselves in the wild. We should always be careful when approaching one, no matter how handsome they are.

Don’t worry about us. We are content just looking at him from afar.[7]

Karen Wishart, a native of South Australia, recently recorded a video of a particularly belligerent kangaroo picking a fight with an intimidating-looking hammock in her backyard. The baby ‘roo is shown circling the hammock while delivering furious attacks and getting its feet tangled up while doing so.

Wishart posted on Facebook that she wasn’t really sure if this baby kangaroo was playing, practicing his fighting skills, or actually squaring up against the piece of fabric. We’re delighted to see that this kangaroo avoided harm because backyard swing sets and trampolines may be dangerous for wildlife, save maybe for a bruised ego after losing a fight with a hammock.

Male kangaroos engage in boxing matches to secure territory or win mating rights. This may be a way for the young animal to practice his fighting skills without destroying too many shrubs and trees by accident—although there is still room for improvement for this young one!

It’s easy to forget that kangaroos are wild animals. They’re cute and cuddly, so you might assume they’re as domesticated as your cat or dog. But no! These guys are still wild at heart and just as prone to mischief as any other animal on the planet.[8]

2 Kangaroo Found Jumping Around on a Trampoline

You know what they say: you can’t teach an old kangaroo new tricks. But you can make them try.

A lone kangaroo was caught on camera jumping on a trampoline in Australia. The video was posted to YouTube by Emma Heffernan. It shows the animal hopping up and down on the trampoline, but the kangaroo got flustered when they got caught! Because kangaroos can run at such high speeds on flat ground, it’s no surprise that this startled animal jumped too hard off the springy surface.

The kangaroo reportedly escaped without injury, but this shows how difficult it can be for wildlife to co-exist with humans.

Although some believe the kangaroo was caught practicing his ninja skills, we should remember that a kangaroo zombie apocalypse can also happen![9]

You know that feeling when you’re walking down the street, and you accidentally trip, and your face meets the pavement? And then you have to find out what that ground tastes like? Well, it turns out a baby kangaroo feels that way about dirt.

The San Antonio Zoological Society posted the video on their official Twitter page, adding some simple but funny captions. They explained that it was footage of a baby kangaroo’s facial expressions after tasting dirt. “Pyrite’s joey got some dirt in his mouth and had quite the reaction,” read the Tweet’s caption along with the video.

In the video, a baby kangaroo stands in its enclosure. After only moments pass, it licks some dirt off the ground with its tongue. His reactions after were simply hilarious.[10]