The deathbed can lead people to speak with great honesty and, in many cases, humor. This is a list of 20 last words by famous people. 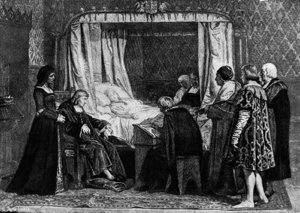 Said by: Queen Marie Antoinette after she accidentally stepped on the foot of her executioner as she went to the guillotine.

3. I should never have switched from Scotch to Martinis.

At times creepy, hilarious, and heartbreaking, read all of history’s most famous final legacies in Famous Last Words, Fond Farewells, Deathbed Diatribes, and Exclamations Upon Expiration at Amazon.com!

Said by: Roman Emperor, as he was being murdered by his own soldiers. 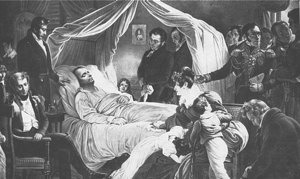 6. Dammit…Don’t you dare ask God to help me.

Said by: Joan Crawford to her housekeeper who began to pray aloud.

7. I am perplexed. Satan Get Out

Said by: General William Erskine, after he jumped from a window in Lisbon, Portugal in 1813.

9. Hey, fellas! How about this for a headline for tomorrow’s paper? ‘French Fries’!

Said by: James French, a convicted murderer, was sentenced to the electric chair. He shouted these words to members of the press who were to witness his execution.

Said by: King George V whose physician had suggested that he relax at his seaside palace in Bognor Regis.

Said by: Joseph Henry Green, upon checking his own pulse.

Said by: Aldous Huxley (Author) to his wife. She obliged and he was injected twice before his death.

Strut your stuff with this classy Aldous Huxley T-Shirt at Amazon.com!

Said by: Emperor Julian, having attempted to reverse the official endorsement of Christianity by the Roman Empire.

Said by: John F. Kennedy in reply to Nellie Connally, wife of Governor John Connelly, commenting “You certainly can’t say that the people of Dallas haven’t given you a nice welcome, Mr. President. 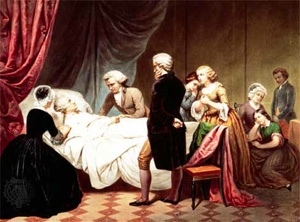 16. Tomorrow, I shall no longer be here

17. Hurry up, you Hoosier bastard, I could kill ten men while you’re fooling around!

Said by: Carl Panzram, serial killer, shortly before he was executed by hanging.

18. Put out the bloody cigarette!!

Said by: Saki, to a fellow officer while in a trench during World War One, for fear the smoke would give away their positions. He was then shot by a German sniper who had heard the remark.

Said by: Mary Surratt, before being hanged for her part in the conspiracy to assassinate President Lincoln. She was the first woman executed by the United States federal government.

Said by: Voltaire when asked by a priest to renounce Satan.