Almost every word would have a different spelling and pronunciation if we traced its origin long enough. While this often happens when a word is borrowed from another language, it can also happen when a word remains in use within that same language.

There are many reasons why this switch happens. However, most words appearing on this list came about due to pronunciation and spelling errors. People just had problems pronouncing a word so they just started calling it what they thought they heard or changed it to something else they could pronounce. 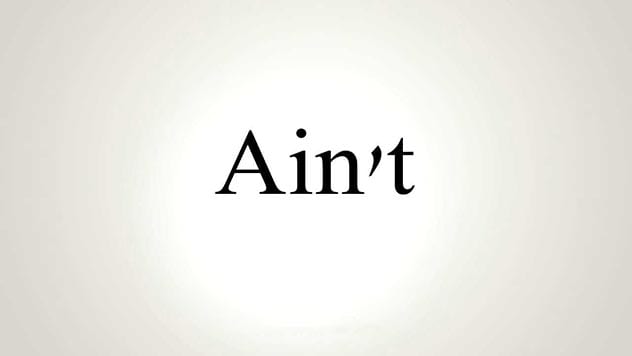 Ain’t is a weird word. Teachers hate it, people consider you old school when you use it and it is not allowed in formal letters (other contractions are not either). It is generally a lot less accepted than similar contractions like wasn’t, shouldn’t and haven’t even though they all have the same origins.

What does ain’t mean anyway? The word does not even give us a clue like other contractions do. Ain’t is the contraction of “am not” even though it is also used for “are not,” “us not,” “have not” and “has not” today. Ain’t was not originally called ain’t either. It was called amn’t in keeping with its origin.

Amn’t did not last in English language because it did not just fit in. English words with “mn” are rare and difficult to pronounce. So the people of the day decided to do away with one of the letters m and n. They did away with the m to form “an’t.” The n survived because it denoted “not,” which indicates that the statement is a negative one.

An’t did not last long either because it was also used for “are not” and “is not.” So a statement like “I an’t coming” could mean I am not coming, I is not coming or I are not coming. People later added an i to “am not’s” an’t to form “ain’t.” Interestingly, amn’t did survive in Scotland and Ireland where it is still use for “am not.”[1] 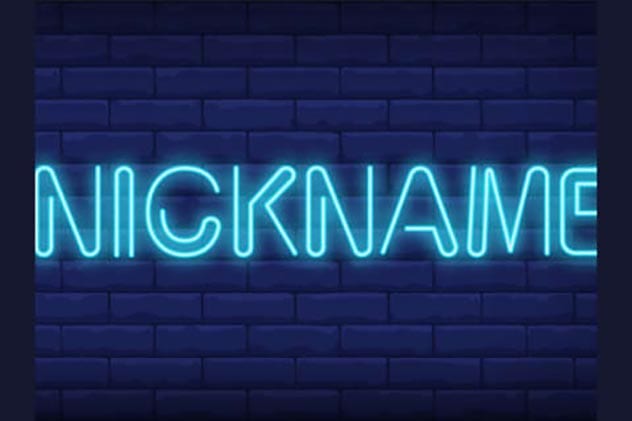 The term nickname first appeared in the year 1303 as “eke name.” Eke is an old English word that has been around for at least two centuries before eke name came along. Eke means “in addition” or “also.” So eke name means “additional name.”

However, eke had become unpopular by the Middle Ages. It was so outdated that many English speakers did not recognize it anymore and considered it a strange word. So they just replaced eke with nick to create nickname. Nick has no relationship with the original eke. It just sounds cooler, similar and is a lot less strange.[2] 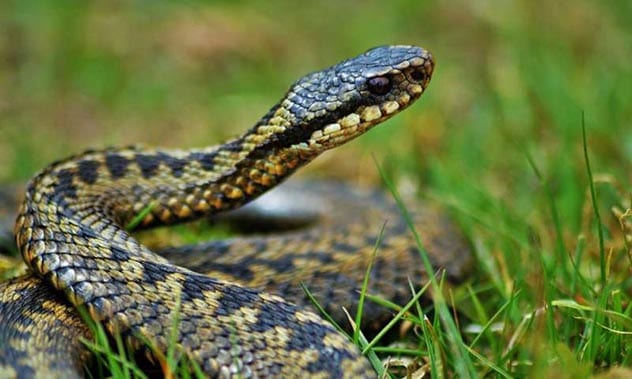 Back to the Old English naeddre, the first e was removed while the other switched places with r to form nadder. People called the snake “a nadder” in conversations until they switched the n to form “an adder.”

This is called rebracketing, false splitting or juncture loss. It occurs when people unknowingly split words based on what they know or think they heard from another person. Hamburger was also formed by rebracketing. It is actually Hamburg and er, after the German city of Hamburg where it was invented. However, English speakers rebracketed it into ham and burger.

Helicopters suffered the same fate too. We think of it as “heli” and “copter” even though it is “helicon” and “pter.” Our error even made us form words like helipad (using heli) and police copter. Helico is from helicon, which means spiral or spinning. Pter is from pteron or ptero, which means wing. Helicopter means spinning or spiral wings.

There is bus too. Bus is from the Latin omnis, which means “for it all” or “for all of them.” Omnis referred to large containers that could carry lot of things. Its plural is omnibus. The first buses were called omnibuses because they could carry many people at a time.

English speakers rebracketed the omnibus as omni and bus instead of omnis and us. People applied this wrong knowledge when they started shortening omnibus into ‘bus. The apostrophe indicated there were some letters before the bus. However, it was later removed, leaving us with just bus.[3] 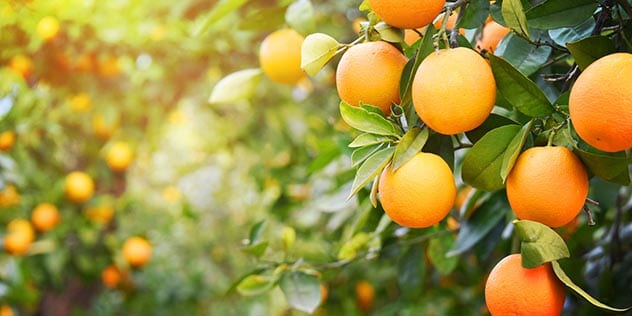 Orange is one English word famous for not rhyming with any other word. That is no coincidence because orange was never intended to be a word. The orange fruit gave the orange color its name. The fruit originated around southern China and northeast India, where it was called “naranga” in the Indian Sankrit language.

Arab traders later removed the replaced the “ga” with a “nj” to form “naranj.” Naranj had become arangia by the time the fruit reached Europe. However, the English and French living in Britain could not pronounce it properly. They called it anything from orange to norange, narangia and un arangia. By the 14th century, they were calling it pomme d’orenge.

Pomme is the French word for “apple.” At the time, people just had a thing for adding apple to the name of any fruit they came across. And it was not long before the orange too became a victim. The English later saved the day when they finally renamed it the orange in the 1500s.[4] 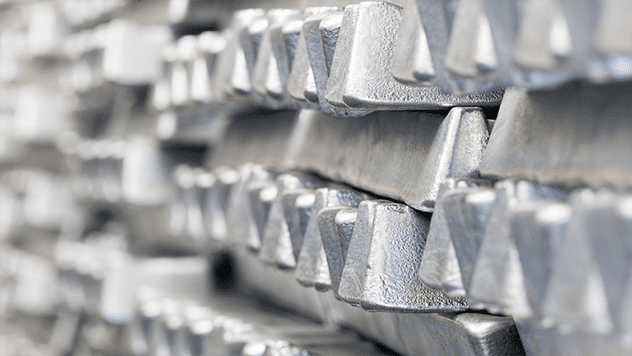 Aluminum could have a different spelling depending on where you are, Americans call it aluminum without the i while Britons say it is aluminium with an i. Aluminum and aluminium were both formed by Sir Humphry Davy soon after the element was discovered.

Sir Davy first named the element in 1807 when he called it alumium. He later changed it to the aluminum Americans use today before switching to aluminium. Sir Davy only added an i just so the element could rhyme with other elements like sodium, potassium and magnesium, which he had also named.

Most scientists (including American scientists) preferred the –ium ending anyway. However, Americans lost the i when American dictionaries like the Noah Webster dictionary continued to spell it without an i. Americans slowly started to switch to the –um ending around 1895. 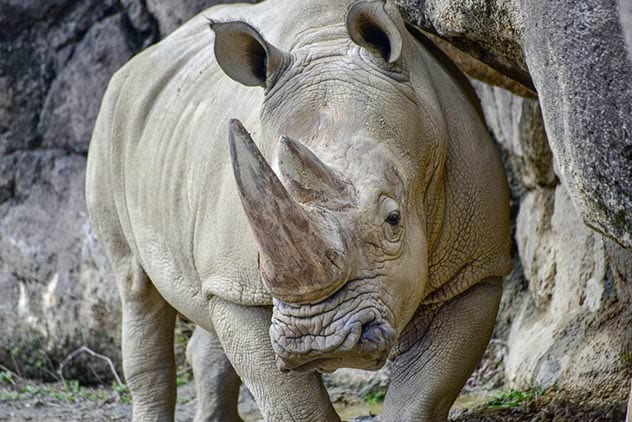 There is a bit of speculation about how the white rhino got its name. We know it is definitely not because of its color because it is not white. It is gray. The black rhino is not black either and is gray like the white rhino. It is impossible to tell both apart by just observing their color.

The earliest reference to the name “white rhino” was a 1801 writing by John Barrow. Barrow claimed the creature was shot in Northern Cape, South Africa in 1798. He wrote that it was white in color and a local chief called it the “white rhino.”

Barrow also wrote about a second rhino that was shot in the Northern Cape but did not indicate if it was a white rhino or was white in color. Nevertheless, sketches show that both rhinos described by Barrow are what we consider black rhinos today.

Most historians agree that the “white” is actually a mishearing of the Dutch “widje.” The Dutch called the animal the “widje rhino” because of its wide lips. This is plausible considering the lip is the most distinguishable difference between the white and black rhinos. White rhinos have wide lips while black rhinos have pointed lips.

Some historians dispute this theory even though they have not provided a convincing answer in return. They say the name “widje rhino” theory kicked off when one C.R.S. Pitman initially claimed the white rhino was named after a mistranslation of the Dutch word for bright or shining. However, the Dutch words for bright and shining did not rhyme like white. 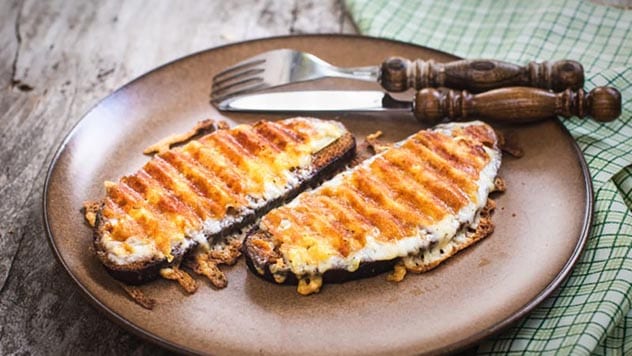 The Welsh rabbit is an English dish of toasted bread and cheese sauce. There is no rabbit or rarebit involved. What does rarebit even mean? It has no meaning. Its only appears in the name of this dish and nowhere else in the English language.

The Welsh rarebit first appeared in the 1500s as caws pobi, which is the Welsh word for toasted cheese. The meal was beloved among the Welsh. There is even a running joke about God using it to trick the Welsh out of heaven.

Historians think caws pobi was later renamed the Welsh rabbit as a joke. Other sources say the name was changed by Welsh peasants to distinguish it from the meat-containing caws pobi eaten by richer Welshmen sometime around 1725.

The dish was again renamed the Welsh rarebit around 1785. Historians think the switch from rabbit to rarebit was an attempt to make the dish sound more like a meal and not some kind of animal.[7]

3 Spitting Image Was Spit And Image Or Spitten Image 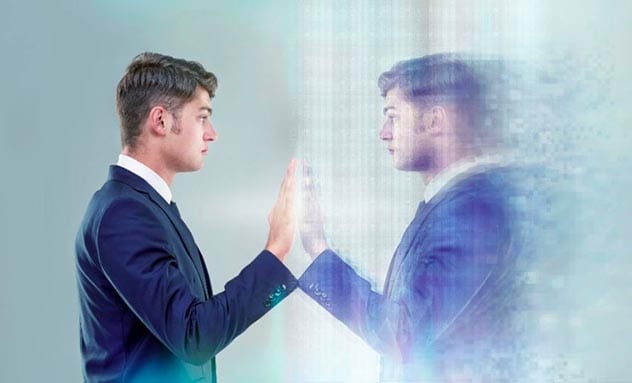 Here is another controversial word with an obscure origin. Its likeliest origin is one of spit and image or spitten image.

Back to spitten image, spitten was the past participle of spit. Spitten became spittin, which became spitting. Others say historians say spitting image was formed after people slurred the “spit” and “and” in “spit and image” into spitting. 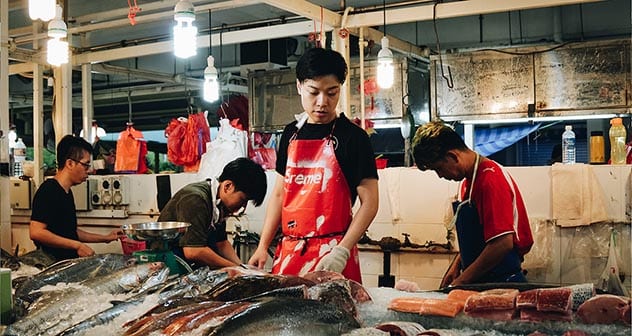 Apron is another word that got rebracketed. It was originally called napron in English. Napron itself started as mappa (napkin) in Latin. The French pronounced mappa as nappe when they borrowed it into their language. Nappe referred to a tablecloth at the time.

The French later formed napperon from nappe. It was napperon that became napron when the English borrowed it into Old English. English people called it “a napron” during conversations. However, people soon started mistaking the “a napron” with “an apron.” And that was how apron became an English word.[9] 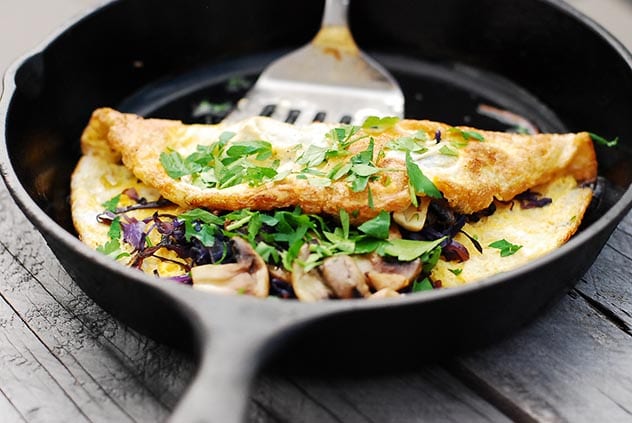 Americans spell it omelet while the English say it is omelette. Both are from the French l’omelette, which entered the English vocabulary as omelette in the 1600s.

The majority of the change in the name of the dish occurred in the French language where it was originally spelled la lemelle although some people did use l’alemelle. L’alemelle and la lemelle later became alemette, until the l and m switched places to form amelette. The process whereby words switch places is called metathesis.

La lemelle and l’alemelle were from lemelle, which means little blade. The French used lemelle to refer to flat items like plates, coins and blades. They extended the name to the egg dish because they thought it resembled a small knife or sword. They called it la Lemelle (the little blade).

Some French speakers soon started slurring la lemelle into l’alemelle. L’alemelle is pronounced with a vocal “a” and a silent “l.” Today, the French call omelets l’omelette, which means “the the little blade.” Interestingly, lemelle would later give us the English word, laminate meaning “to beat into thin layers.”[10]

For more lists like this one, check out 10 Controversies Caused By Commas, and Top 10 Sayings With Misunderstood Origins.